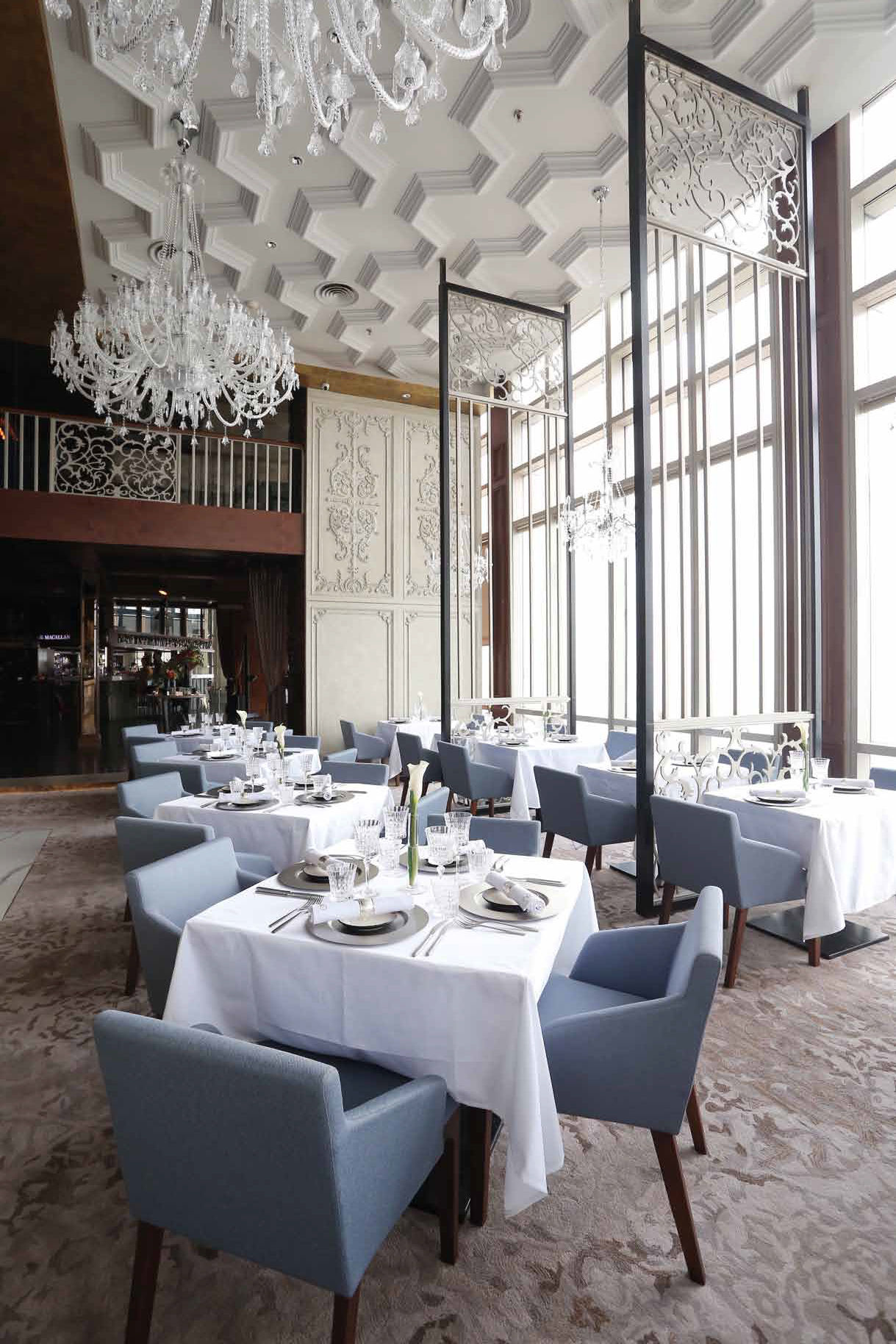 Major changes have been applied to OSO Ristorante at altitude at the Plaza, most notably its lavish interior and enticing cheese room, as Handayani Tanuwijaya discovered.

It’s hard not to be mesmerised by the new-look OSO Ristorante on the 46th floor of Altitude at The Plaza. The signature 360-degree views of Jakarta have been complemented by the Italian restaurant’s brand-new crystal chandeliers. In addition, new white wall panels feature Victorian motifs.

The white linen-topped tables are adorned with white lilies, and the diners sit on baby blue chairs. The centrepiece is a large group of black-and-white photos of glamorous Italians, from actress Sophia Loren to footballer Gianluigi Buffon. Also, there’s a newly decorated VIP room for up to 10 guests.

Formerly known as Gaia by OSO Ristorante, the 72-seat OSO is a rarity among independent restaurants. It has now been open for five years, a tribute to its founder, Diego Chiarini. Major changes have been applied to the revamped eatery, most notably the lavish interior and the enticing cheese room. “Both the interior and the cuisine are more sophisticated than before,” says Chef Chiarini, who describes himself as “Cook & Owner” on his business card. He founded OSO with Stephane Colleoni in Singapore in 2004. Now, in addition to Jakarta, they have a branch in Kumming southern Yunnan province in China. Chiarini has worked in some of the world’s leading restaurants, including Bice at Tokyo Four Seasons Hotel Royal Monceau Hotel Paris, Four Seasons Hotel Milan and Hotel de Paris Monaco, where he once worked alongside Alain Ducasse.

“We have kept most of the menu unchanged because the dishes are what our customers are looking for,” adds Chef Chiarini. “But I’m taking great pride in our latest addition, a cheese room with 30 Italian cheeses. Five years ago, we didn’t think Indonesians were ready for something like this. But the market here is growing, and diners are becoming more open-minded because they travel so much.”

The kitchen of the Jakarta restaurant is led by Chef Nazario Orlando, who previously worked at OSO in Singapore. For starters, his team prepares Spinaci (Rp 90.000), spinach salad with honey mustard dressing and pine nuts and Granchio (Rp 120,000), crab with Sicilian trapanese salmoriglio.

Pizza Smokey (Rp 295,000) is living proof, that a great pizza doesn’t need red meat in it to taste good. It is made with garlic butter, smoked cheese, smoked salmon and lots of arugula. Who says a pizza shouldn’t go along with greens?

The creamy OSO Ravioli (Rp 150,000), a signature first main course, is topped with edible 24k gold. Another classic dish is Chittara (Rp 165,000), spaghetti with spicy Wagyu meat balls ragu. As for the second main courses, the choices include 500gr T-bone steak (Rp 550,000), complete with mushrooms, pepper sauce and potatoes. Among the desserts is another signature dish, Chef Nazario’s Tiramisu (Rp 85,000).

“The phrase ‘Made in Italy’ means high quality,” Chef Chiarini tells us as we digest OSO’s hearty specialities. “Life is short life, so every moment is important. You have to pamper yourself and enjoy good food every once in a while. At OSO, we give you a two-hour holiday in Italy.”

OSO Ristorante Altitude of The Plaza