Can you get Omicron and Delta COVID-19 variants at the same time? Here’s what to know 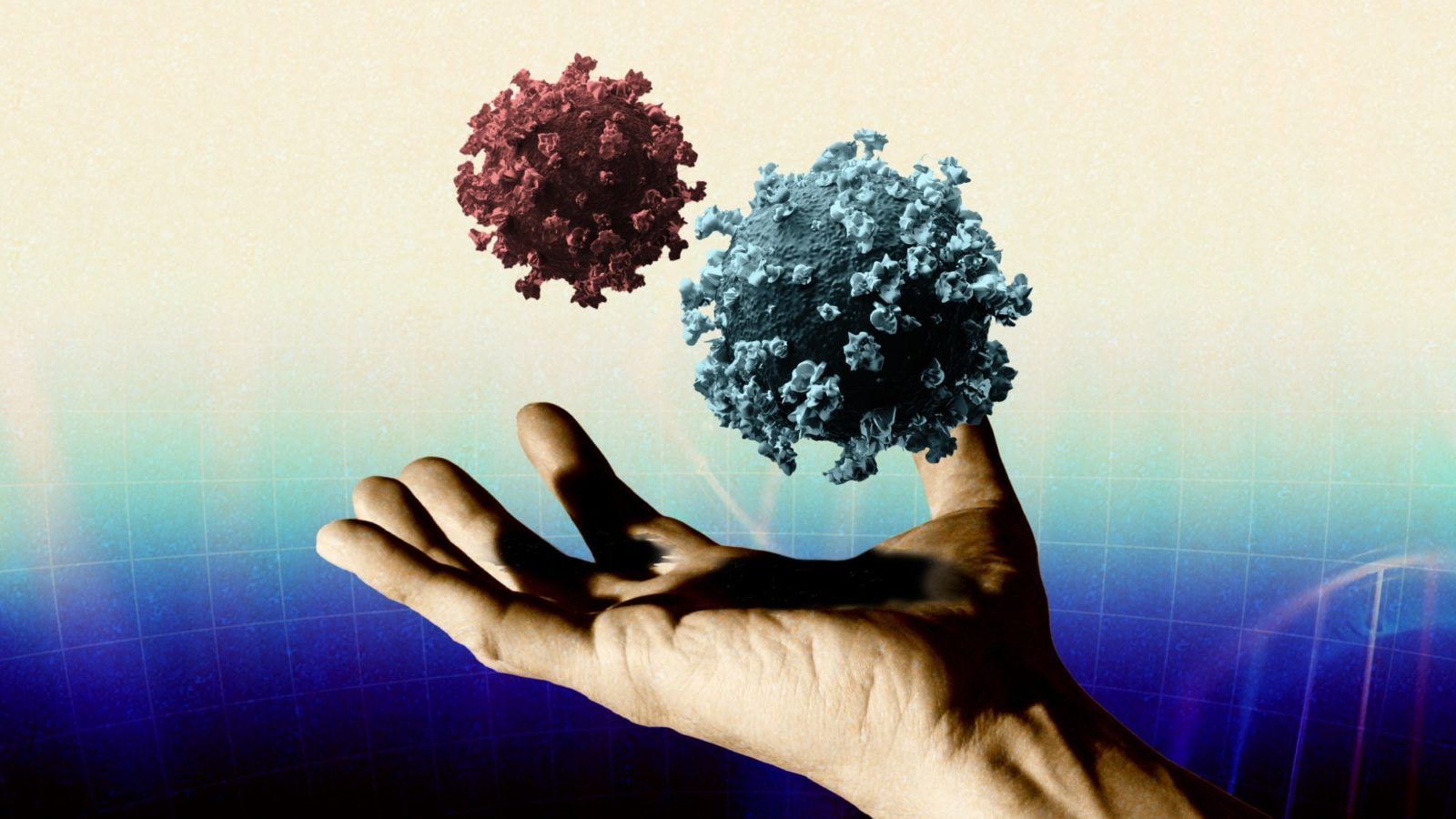 Beauty & Wellness
Can you get Omicron and Delta COVID-19 variants at the same time? Here’s what to know
Share
Next article

In late November 2021, the World Health Organization (WHO) named the B.1.1.529 variant of COVID-19—better known as the Omicron variant—the newest “variant of concern,” after a steep increase in infections in South Africa. Since then, the Omicron variant has spread quickly throughout the world, causing massive spikes in cases of COVID-19. According to the Washington Post, Omicron is now the leading variant in countries like the United Kingdom, Australia, and Mexico.

With both strains of the virus still circulating — and with some key differences between the two variants, including transmissibility and severity of symptoms — there’s an important question in play: Can you get the Omicron and Delta variants of COVID-19 at the same time? Here, infectious disease experts and epidemiologists help explain the possibility of coinfection of two strains of the same virus — and what that means for your health while COVID-19’s Omicron and Delta variants are still going around.

Can you be infected with Omicron and Delta at the same time?

While it’s not common, there have been at least three documented cases of someone having two strains of COVID-19 at once.

A scientific paper presented at the European Congress of Clinical Microbiology & Infectious Diseases this summer broke down the story of a 90-year-old woman in Belgium who had both the alpha and beta variants of COVID-19. After her screening test for SARS-CoV-2, the virus that causes COVID-19, gave a strong positive result, follow-up testing to look at particular variants found that she was infected with two strains. She was hospitalised and died just five days later. According to the case report, the source of the double infection was unclear.

Another paper, published in April 2021 in the journal Virus Research, identified two patients in their 30s in Brazil who were infected in November 2020 with the P.2 variant and another variant (one person had the Gamma variant; the other had the B.1.91 variant). Both patients had mild symptoms, including a dry cough, sore throat, and headache.

While there haven’t been any documented reports of coinfections with the Delta and Omicron variants yet, doctors say it can happen. “It’s absolutely possible from a molecular point of view,” Thomas Russo, MD, professor and chief of infectious disease at the University at Buffalo, tells Health.

Amesh A. Adalja, MD, an infectious disease expert and senior scholar at the Johns Hopkins Center for Health Security also says a coinfection with two strains of the same virus can happen: “Biologically speaking, yes, it’s possible to be infected with Omicron and Delta at once,” he tells Health.

How can you get a coinfection of Omicron and Delta?

It should be noted that in all three documented cases of variant coinfections, researchers weren’t sure of the source. Dr Russo, however, says the best way to understand how a coinfection like this could happen is through an example: “Imagine you’re at a bar where there are multiple people that are infected,” he says. If some people have the Omicron variant and others have the Delta variant, they’re all shedding those viral particles into the air, exposing you to both variants. That way, “you can get a dose of both viruses at the same time,” says Dr Russo.

How this can happen, on the surface level, is pretty simple: The Omicron variant of SARS-CoV-2 infects some cells, and the Delta variant infects others. Whenever a virus enters your body, particles won’t bind to every single cell—so in a coinfection, the different strains of the virus can bind to different cells a the same time, says Dr Russo. To this end, it won’t be a 50-50 split: “You could have more Delta than Omicron or vice-versa,” says Dr Russo. “Both could set up shop and potentially cause infection.”

In addition to being infected with both variants at the same time, Dr Adalja says it’s also possible to contract both strains “in close succession” to each other. Though this scenario might be harder to come by, due to the immunity the body begins to develop following a COVID-19 infection. “It’s probably harder for this to happen after more time has passed, because your immune system gets revved up,” says Dr Adalja.

It’s also important to note that COVID-19 isn’t the only illness in which this can happen. “It can happen with other infections, including the flu,” says Dr Russo. A 2015 communication in the Journal of Clinical Virology shared that an influenza coinfection between influenza A/H3N2 and influenza A/H1N1pdm09 was detected in a 3-year-old boy in Cambodia in 2014. The authors concluded that, while it’s unclear how often these influenza coinfections happen, laboratories should still consider the possibility during flu surveillance.

How would you know if you had an Omicron and Delta coinfection?

As of right now in the US, genomic sequencing also isn’t done on every positive COVID-19 test—it’s usually only done in specific situations (the CDC only knows which strains of COVID-19 are circulating, and at what level, through a sampling of de-identified specimens from state and local labs). In a recent interview with the Mayo Clinic, Bobbi Pritt, MD, director of Mayo Clinic’s Division of Clinical Microbiology, noted that individuals don’t really need to know which variant of COVID-19 they have, since it doesn’t impact treatment. Tests might be sequenced, however, if a large group of people came down with COVID-19 at the same time, in order to know how and why it spread from a public health standpoint.

Symptoms won’t be able to tip you off, either. Though you might think a coinfection of two different COVID-19 strains might cause some sort of increase in symptoms, that’s unlikely to be the case. “We don’t expect ‘double’ symptoms,” Stanley Weiss, MD, professor at the Rutgers New Jersey Medical School and the Department of Epidemiology at the Rutgers School of Public Health, tells Health. Basically, a coinfection will likely look like a typical COVID-19 infection.

The good news: As Omicron continues to outcompete Delta as the dominant strain in the US, there’s less of a chance for coinfection. According to Dr Russo, coinfection of Omicron and Delta would’ve been more likely when Omicron was just starting to make its way through the US, while Delta was still dominant. Being fully vaccinated—which is the case for 62.8 percent of the US population, per CDC data—also lowers the risk of any infection, including a coinfection, says Dr Russo.

So while having a coinfection of Omicron and Delta COVID-19 variants seems especially worrisome, Dr Adalja says it’s not as big of a deal as it sounds. “It’s not really a big deal for people who take care of patients,” he says. “It’s unlikely to have a major pathophysiological impact.”

The information in this story is accurate as of press time. However, as the situation surrounding COVID-19 continues to evolve, it’s possible that some data have changed since publication. While Health is trying to keep our stories as up-to-date as possible, we also encourage readers to stay informed on news and recommendations for their own communities by using the CDC, WHO, and their local public health department as resources.