Eco-anxiety is real — Here’s how to cope 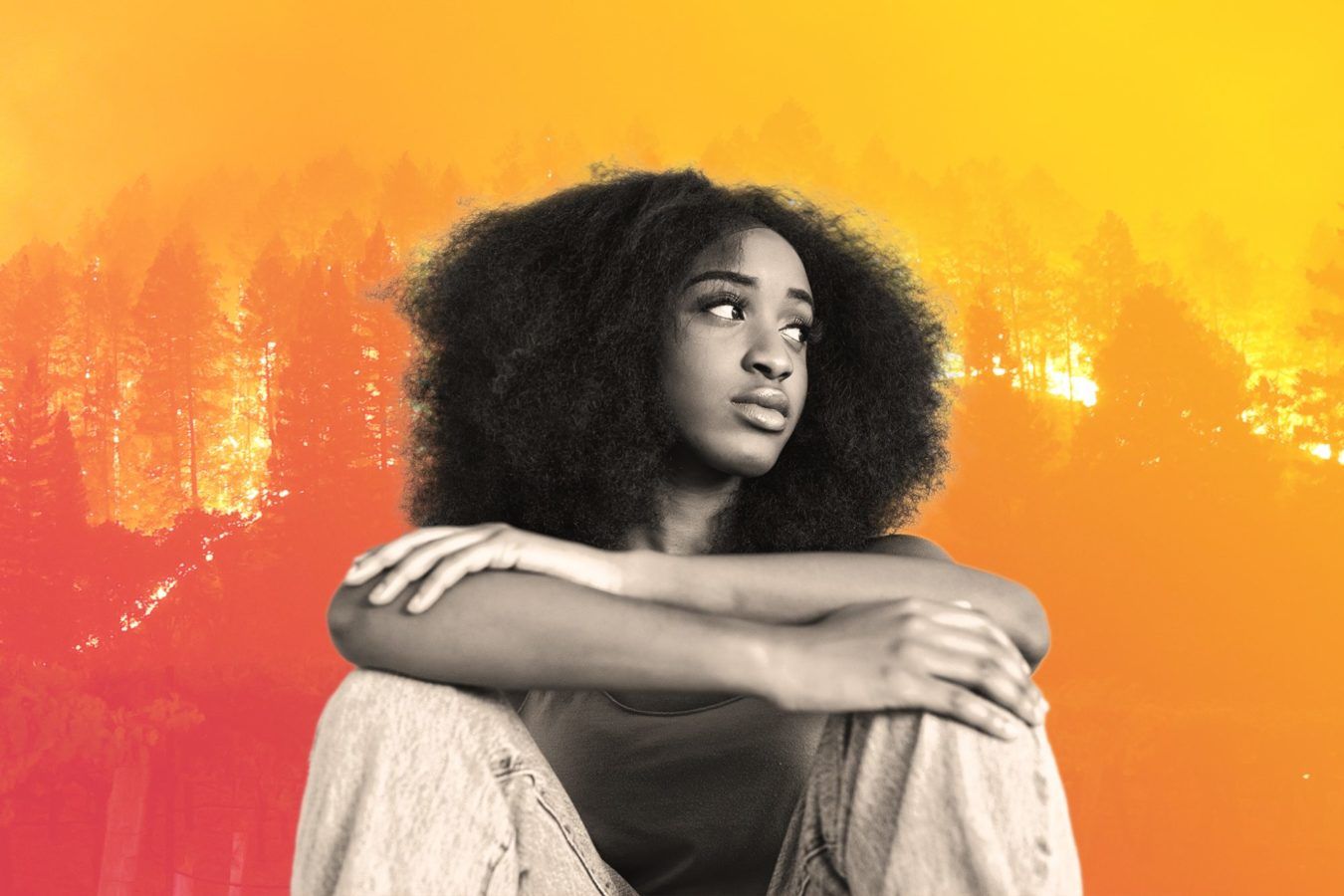 It only took one news headline to kill my drowsy, blissfully unaware state and turn me into a panicking mess with sweaty palms and a racing heart.

Moments before, I had fluttered my eyes open from my eight-hour snooze and innocently tapped my phone screen, where a notification from The New York Times app awaited me. I quickly skimmed the text: A new scientific report from the United Nations stated that “some devastating impacts of global warming are now unavoidable,” and humanity can’t stop it from intensifying before 2050.

The news left me, quite literally, shook. Over the past few years, I’ve become hyper-aware of my personal environmental impact and have pushed myself to find ways to reduce it (hi, vegetarianism, bye, single-use plastics). I’ve even written dozens of stories on the impacts of climate change — including on mental health and the maple syrup industry — and the steps everyone can take to curb it (think: shopping sustainably, looking out for greenwashing, minimising food waste). But suddenly, this report told me these efforts would all be for nothing. I spent the rest of the day feeling on-edge and defeated.

As it turns out, there’s a name for what I was (and still am) feeling: eco-anxiety, which the American Psychological Association defines as “a chronic fear of environmental doom.” And I’m not the only one experiencing it: More than two-thirds of US adults report having “at least a little ‘eco-anxiety,'” and nearly half of 18- to 34-year-olds say they feel stress over climate change in their daily lives, according to an APA survey of more than 2,000 people, released in February 2020.

What Is Eco-Anxiety, Exactly?

In addition to the APA’s definition, eco-anxiety (aka climate anxiety) can be more broadly described as emotional, cognitive, and behavioural responses that are related to worries about a changing climate, says Sarah Lowe, PhD, a clinical psychologist and assistant professor at Yale who studies the effects of natural disasters on mental health. “This could be feeling very stressed about the idea of climate change, having thoughts like, ‘We’re all doomed and this is a hopeless situation,’ and behaviours that would be not quite functional, like avoiding media coverage and conversations about climate change,” she explains.

FTR, anxiety isn’t always a bad thing, and it’s a normal reaction to stress, according to the National Library of Medicine. Feeling anxious ahead of a major presentation at work, for instance, can actually help you deal with the task at hand (think: prompting you to start preparing notes a few days in advance). On the same token, experiencing eco-anxiety can get you to kick your planet-saving efforts into high-gear, says Lowe. “Perceiving a threat to human existence, for some people, can be really motivating,” she explains. “You have to have a feeling of anxiety to engage in activism, to take steps yourself to combat climate change [and] to hold businesses and governments accountable.”

That said, eco-anxiety becomes a concern when it causes significant distress and interferes with your ability to function, says Lowe. In those cases, the symptoms of eco-anxiety can be similar to those of generalised anxiety disorder, just with a focus on climate change, she says. For example, you might feel an overwhelming sense of panic about climate change, have intrusive thoughts (ie unwanted thoughts, images, or impulses that pop into your head outside your control) about the crisis, or experience disruptions in your sleep and eating habits because of your stress, she explains.

For folks with those symptoms, eco-anxiety has the potential to create lasting mental health impacts. “I think that the threat of climate change — like other stressors you might encounter in your life — could be something that triggers an underlying vulnerability for a mental health condition, like depression and anxiety,” says Lowe. “Is it going to be the direct cause? Probably not. It’s going to be something that combines with other vulnerabilities to lead to a clinically significant problem.”

Unsurprisingly, experiencing the effects of climate change first-hand (eg having your home destroyed by a wildfire or flood) can bring about eco-anxiety and other mental health concerns, including trauma and shock, post-traumatic stress disorder, compounded stress, substance abuse, and depression, according to the APA. “The people who are seriously injured, who lose a loved one, whose homes and communities are destroyed, who have financial losses due to the disaster, who are displaced, they’re all at risk,” says Lowe. “…If you’re someone who’s already struggling with your mental health and you experience a disaster, your response to it is going to be greater than someone without a pre-existing mental health problem.”

The burden of climate change isn’t divided up equally, however. Black individuals are 40 percent more likely to live in areas with the greatest projected increases in mortality rates due to climate-driven extreme temperatures. And American Indian and Alaska Native people are 48 percent more likely to live in areas where the highest percentage of land is expected to flood due to sea-level rise, according to a September 2021 report from the Environmental Protection Agency. Compounding the problem is the fact that Indigenous communities, low-income groups, certain communities of colour are more vulnerable to experiencing climate change’s mental health impacts, including eco-anxiety, according to the APA.

Still, direct exposure to climate change’s consequences isn’t a prerequisite to suffer from eco-anxiety, says Lowe. “You don’t have to have experienced a major disaster or heat wave or [lived] in a place that’s highly affected by climate change to have these feelings.” Instead, the hopelessness, fear, and panic that come with eco-anxiety can stem from the expanding media coverage of climate change’s environmental and social impacts, she explains. Last October, print and television coverage of climate change and global warming reached an all-time high in the United States, according to data from the Media and Climate Change Observatory. Simultaneously, climate change-related weather catastrophes have only become more common, with their frequency increasing by 46 percent between 2000 and 2017, according to research published in The Lancet.

As a result, people are watching these tragedies become more prevalent, more catastrophic, and more geographically widespread — and they’re learning even more about what’s to come, says Lowe. “[They’re] hearing projections about what could happen in the future — that these types of exposures are only going to get worse,” she adds. “That as temperatures increase, there are going to be downstream effects, and [there’s] potential for them to threaten various resources that help that sustain our existence, like water, food access, and housing that’s safe,” she adds.

TL;DR: The growing media coverage on the present and future of the planet, coupled with the skyrocketing number of climate change-related disasters, is a recipe for eco-anxiety.

How to Cope with Eco-Anxiety

Simply feeling as though you can’t make a difference in stopping climate change can prompt eco-anxiety, which can lead to feelings of loss, helplessness, and frustration, according to the APA. But doing everything you personally can to improve the planet — regardless of how big or small the effort — can help you cope, says Lowe. Try taking up recycling or composting to reduce the waste you create or adopting a plant-based eating style (eg the planetary health diet) to minimise your carbon footprint, she suggests. Better yet, make your activism a collective effort. “Find a community of others who have the same concerns and work together to make a change,” says Lowe. “I think that is probably more effective in helping foster the bigger changes that are really needed to offset climate change…[and] we know that social support is so important for mental health.”

Practising self-care — whether it be exercise, meditation, or spending time with friends — can also help keep your stress levels in check, and don’t be afraid to turn off your phone and disengage from the disheartening media coverage. “We don’t want to keep our heads in the sand, but I think there is a difference between reading articles from trusted sources and doomscrolling, as to say so reading the same story on several different sites and looking at graphic images repeatedly,” she explains. One reason: People who spend more time consuming media related to disasters, particularly on television, tend to have worse mental health outcomes in their aftermath, says Lowe.

Of course, you don’t have to cope with your eco-anxiety alone. As a clinical psychologist, Lowe says she’s a big proponent of seeking mental health services if you have any concerns — even if it’s just for one session. More specifically, if you feel significantly distressed, anxious, or sad more often than not, are suffering from sleep troubles and appetite changes, have difficulty functioning at work or school, or your friends and family have expressed worry, you may want to chat with a professional.

And while there are plenty of qualified practitioners out there, a cognitive-behavioural therapist or mental health professional who specialises in mindfulness and acceptance can be particularly helpful when it comes to treating eco-anxiety, says Lowe. Cognitive-behavioural therapists, in particular, can use their knowledge of a patient’s thinking patterns (eg their tendency to over-worry or “catastrophise” a problem) to help ease their responses to climate change, according to the APA. “Sometimes when you see people for anxiety, the strategy is to have the person critically evaluate their thoughts and notice that maybe they’re overreacting,” explains Lowe. “But…these are real threats and real stressors, so try to connect with a provider who does validate and recognise that climate change is a concern.”