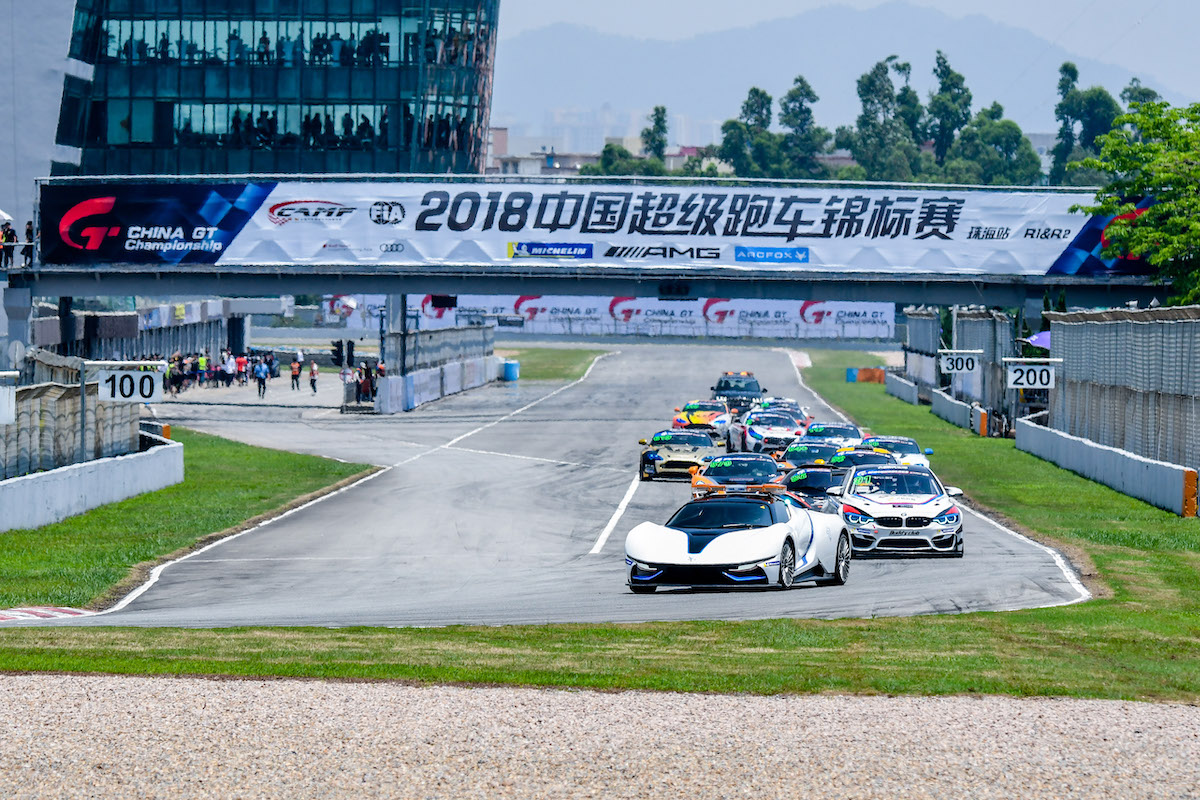 Need for speed: A conversation with Matahari Lee and Jim Ye of the Asia GT Festival

People & Events
Justin Ng
Sign up to get the latest luxury and lifestyle news delivered to your inbox.

People & Events
Need for speed: A conversation with Matahari Lee and Jim Ye of the Asia GT Festival
Share
Next article

When one door closes, another opens, so goes the adage. While the demise of the Malaysian Grand Prix inevitably disappointed many, the void leaves the door ajar for another headlining race to fill the F1’s vacuum on the calendar. Partnering with Goldenport Motor Culture Development (Beijing) Co, Country Heights is delivering the first leg of the China GT Championship at the Sepang International Circuit. It is the first time the China GT Championship is held outside of the republic – home to the remaining five legs. The race is part of the wider, inaugural edition of the Asia GT Festival whereby high-speed dramas are guaranteed from March 15 till 17.

Besides witnessing high-performance machinery tearing up the track, spectators will also be treated to the Proton Saga Cup and Race Car Open categories piloted by amateur racing drivers. To get the low-down on the origins of Asia GT Festival and how it forms an integral part of Country Heights’ greater vision for Mines Car City Centre, we speak to Jim Ye, Chairman of Goldenport, and Matahari Lee, Executive Director of Country Heights who is also listed in our 2017 list for 40 under 40.

Louis Colmache talks about the joys of racing in a Ferrari As A Hobby
Pursuits
Can you please explain more about the China GT Championship and the Asia GT Festival?

What about the five-year agreement between both parties?

Matahari Lee (ML): Our target is to take the Asia GT brand to the rest of Southeast Asia within the five-year period. That is our main goal. This is a platform, not just for the China GT Championship to come into Malaysia. By the end of the day, our goal is to be able to link up GT events to our platform. Next year, we hope to get Formula 3 to participate in our event. I think in terms of four-wheel racing, we are probably the biggest one this year. But from 2020 onwards, the Japan Super GT is going back to Sepang. We have already started talks with the same group of people. The idea is to be able to merge all these different series under one big umbrella. We feel it is about time we put away our differences and look towards a greater goal to strive for within motorsport.

How did the seed of this event germinate?

ML: We have a special relationship. Jim is a close family friend. It is through our Mines Car City Centre project which was launched in 2018 that this whole idea came about. We actually approached Jim’s side. Goldenport has already established itself as one of the pioneers in China for automotive real estate development so we have approached them to assist and advise us on our project. Through our discussions on the project, the idea came about to do a race in Malaysia. The China GT Championship has been running for the past three years and they also feel that they are at a mature stage to move up.

JY: The idea came up six years ago when Tun Dr Mahathir Mohamad visited Goldenport in Beijing, near the Beijing International Airport. I was introduced to him by Tan Sri Lee Kim Yew (Country Heights’ founder). During that visit, Mahathir thought the Motor Park was very good because it had a track in the middle of the park. There were many dealers surrounding the track as well as tuning shops and racing clubs. It was a motorsports city with a lot of commercial facilities. It was a very good idea for every major city to have this facility. He suggested to me to go to Malaysia and do a similar one. The idea was always in the back of my mind. Last year, Lee and I met again in Beijing and said let’s do something together. We started with the Asia GT Festival and there will be more to come.

On the other hand, the China GT Championship started in 2016. From the very beginning, it has been very successful. There are more race cars on the grids, there are more spectators on the grand stands and there is a lot of media coverage. For the last three years, we have the most valuable racing IP in China. The GTs are all major automotive groups participating. Last year, there was a Chinese carmaker that entered an electric GT as a pace car so I see the trend that there will be more Chinese automakers going out of China. That is why we need to build a platform for them to do their branding. Kuala Lumpur is one such hub that can cover the whole ASEAN region.
Since there is no more F1 in Malaysia, we thought we would receive a lot of support from the government to organise the China GT Championship here. It turns out to be the case. The Asia GT Festival is an open platform. We welcome any GT series to participate. In the future, I believe it can be more than just one weekend, it can be multiweekend so other series can join. We call it a GT festival because it goes beyond gran turismos. For us, GT means getting together, good time, good things, good taste. It is a lifestyle. We want to create a passion lifestyle. The GT championship is one of them. There will be a GT academy, training, GT show, GT gala dinner, etc.

“For us, GT means getting together, good time, good things, good taste. It is a lifestyle. We want to create a passion lifestyle. The GT championship is one of them. “
Jim Ye, Chairman of Goldenport
What are your KPIs?

ML: Our target is to get a minimum of 10,000 in crowd numbers over the weekend. Whether we will achieve it is something we can’t guarantee yet, but it is something that we work very, very hard towards at this moment.
I want to add that the main reason why we call our event the Asia GT Festival – and not Asia GT Championship – is because our main target audience is not just motorsports enthusiasts; our target is to create an event that everybody in a family will be able to enjoy. Off-track, we will have carnivals where people can win prizes. We will have vendors display their products. We will also most likely have a celebrity bazaar where there will be 40 to 50 local celebrity entrepreneurs setting up booths, whereby they can meet and greet their fans and promote their products. We will have food trucks present as well.

“The main reason why we call our event the Asia GT Festival – and not Asia GT Championship – is because our main target audience is not just motorsports enthusiasts; our target is to create an event that everybody in a family will be able to enjoy”
Matahari Lee, Executive Director of Country Heights
Do you expect a lot of Chinese tourists to attend?

ML: No, because predominantly this event is being promoted in Malaysia. The main participants of GT3 and GT4 will be from the current China GT platform. The support races will be from Malaysia, which are run by the Malaysia Speed Festival (MSF).

MSF is Malaysia’s only grassroots motorsports development association so it will come in and hold two races – unlimited class and Saga Cup. We will help the winners of the unlimited class to win a test seat with one of the professional GT teams.

Where does the Asia GT Festival sit within your plan for the Mines Car City Centre?

ML: This sits perfectly under the lifestyle section. Under the Mines Car City Centre project, we aim to make Malaysia a hub for automotive development for Southeast Asia. To make this a reality, we need to look at three aspects. First is lifestyle where Country Heights will look into investing in various automotive event companies that own IP as well as develop strategic partnerships with people like Goldenport. Second is properties where we are building a new 3 million sqft mixed development building whereby if you buy a car here, you will never have to buy a car again. Third is industry which we will focus on automotive development in the country.

Why Country Heights as a developer has decided to do the Mines Car City Centre project is because when we look at the economy as a whole, the two main indicators of a healthy economy within a developing country are real estate and automotive. These two generally don’t have much tie-up when it comes to product innovation. Country Heights is leveraging its assets and facilities to develop strategy partnerships with the automotive industry. That is why we are going into this particular project.

Anything special we should look forward to?

ML: What’s special about the weekend is the combination of high-end cars and cars that people can relate to. The Saga Cup brings back the nostalgic feeling of the Malaysian automotive industry. It is the first national car. During that weekend, Mahathir has agreed to officiate the event. He will flag off the Saga Cup. We have also spoken to NIO, a new electric car company whose main shareholder is Chinese and developed throughout the world. Mahathir will take a hot lap in its EP9 model, currently the world’s fastest electric car.

Expectation: riding along the coast on a Vespa 946

@virgilabloh has dropped his first and highly anti

Can you guess which famous movie this home feature

@MyThinkCity conducted the You OK or Not During MC