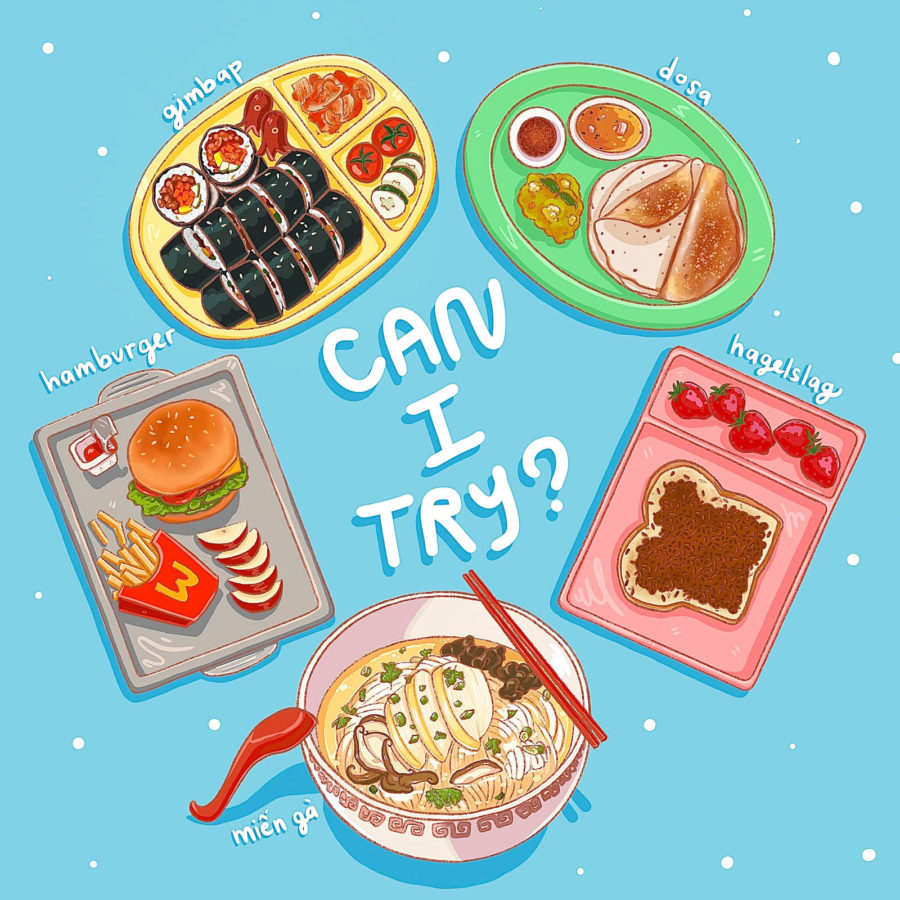 It happened when Mansi Goel was in seventh grade, just two years after her family had moved to San Francisco from Uttar Pradesh in northern India. She was asked to bring her favourite dish to school for a potluck. Her mother and grandparents spent hours in the kitchen hand rolling and pan frying ninety parathas so every classmate could have a generous share.

In class the next day, as she unrolled the foil-wrapped paratha and found a spot for them next to the pasta salads and hot dogs, she heard: “Eww, what’s that?” She went outside to find friends and distract herself. That’s when she saw him, a boy at the top of the stairs flinging a paratha like a frisbee across the courtyard. He was laughing and a few others joined him. “They throw parathas at the walls like toys, like weapons,” she writes in “Paratha,” an essay to be published in Lunchbox Moments, a new zine that shares intimate stories of Asian American identity through food.  “I’m frozen, my breath locked in my chest. Every paratha I see on the floor is a wound where my family’s labour and love was poured. I want to gather each one and cuddle it close. I want to snarl at these kids.”

But Goel did not snarl. She did nothing. She was paralysed.

“I’m too unsure to challenge the happy ignorant children mangling the food my beloveds made with their hands,” she continues. “So, I say nothing. I will never say anything. I will never tell my family how their gift was treated. I will lie about people’s curiosity as though hiding from heartbreak will keep us safe from the people we are all striving to fit in with.”

Goel, who is 44 and a former executive at Google, has still not shared this story with her family. Her voice shakes when she talks about it. “I didn’t know how to protect it. I didn’t fight back. I just felt so gut punched,” she said.

She reflects on what it meant to her at the time. “I hate the power and entitlement in their pale little bodies,” she writes. “I hate their irreverence. I feel the burn of it as it chars what is precious to me. It will be years before I understand that under this hate is jealousy. For their freedom.”

Watching the riots at the Capitol on January 6th, she writes that she felt the same kind of revulsion bubbling up. “One day, in another century, I will see these bodies, grown but still gleeful, flinging their spit and shit in the most hallowed halls of the nation just like I see them flinging parathas in class now. Laughing and just walking away. Free. So pale and so free.”

Goel’s story is one of 19 powerful essays and three original works of art that will appear in Lunchbox Moments, which will raise money for the San Francisco Chinatown Community Development Center, nonprofit supporting Chinatown restaurants and SRO residents.

The zine was created by Shirley Huey, Diann Michelle, and Anthony Shu, along with designers Haylie Chan and Jeffrey Zhenhua, friends who had been thinking about a way to collaborate on a project that would reveal their own identity as Asian Americans.

With the sharp increase in AAPI hate crime and the fatal shootings in Georgia of six women of Asian descent, they felt a sense of critical urgency to do something sooner than later. “Asian Americans, specifically Chinese Americans, have been the victims of two pandemics “both COVID and racist pandemic,” said Diann Michele. “We wanted to provide a platform and space for people to express their experiences and also their emotions about what has happened in their lives. The vision for the zine is to not only give voice, but space for voices to commune together.”

While the zine’s title might indicate stories about school-aged lunch narratives centred on shame, the founders aim to create a well of understanding and healing by sharing a variety of experiences beyond the more cliche – “yuck what’s in your lunchbox” – moments. “We didn’t want 30 narratives of the same story,” said Shu. “The lunchbox moment narrative is often centred on shame, but we are sharing stories and memories of joy, honour, pride, anger, and grief.”

Anger and frustration come across in Brian Nguyen’s essay, “Noodles and Rice,” in which he recounts the first time he got hit with: “What’s so special about Vietnamese food? It’s just noodles and rice.”

In his essay, he recalls the pain of that effortless ridicule. “I never quite understood the combative or dismissive logic behind statements like that,” he writes. “You don’t see me going around telling white people it’s just all meat and potatoes. Or telling Italian grandmothers that it’s just pasta. Why was it easy to be a target of my own cuisine? My own upbringing? Food at its basic core are the ingredients you have around you and executing them to make something unique. Cultures may be different but we’re all just finding nourishment and fulfilling a basic human need, right?”

For Ashley Hampton, who is Chinese-American, the shame started in elementary school when her mother would prepare her homemade Chinese sausage and eggs over rice for lunch. “Every time she brought it, I remember the joy I felt, but it was always quickly diminished by at least one classmate’s comment on how it smelled. ‘Oh wow, that food is stinky. How can you eat that? That looks really gross,‘” she writes.

“To me, [Chinese sausage and eggs] symbolizes a journey of joy, embarrassment, estrangement, and ultimately pride.”
– Ashley Hampton

Eventually Hampton asked her mother to stop bringing it for lunch. “It took about a decade for me to find the courage to eat Chinese sausage and eggs in public again, to rebuild that cultural pride that my mom had worked so hard to instil in me,” she writes. “To me, this dish symbolizes a journey of joy, embarrassment, estrangement, and ultimately pride.”

Other stories in the zine explore sadness, fear, and a sense of loss. In “The Secret Menu,” we become voyeurs at a dinner between author Grace Hwang Lynch and her mother at a Taiwanese restaurant. Hwang Lynch was raised in a Taiwanese American home but never learned the language. She can only eat the foods of her childhood when she goes out to dinner with her mother, who is native speaker and can order off-menu.

“I look across the table to my mother, who is scanning the menu,” she writes. “Can you order ô-á-chin?” I ask, craving the chewy Taiwanese omelette packed with oysters and fresh greens drizzled with tangy sauce. Children often ask their parents for permission to order a certain food at a restaurant; I am a daughter, but I am also a middle-aged adult. Will I ever be able to order the foods of my childhood on my own?”

Hwang Lynch, who is a freelance writer and a producer at the Center for Asian American Media, says foods like ô-á-chin are very strong evocative connections to her Taiwanese heritage. She hopes, especially now when so much of her culture seems at risk, that the restaurants that do serve them don’t die out.

“These restaurants provide more than food,” she said. “They are preserving traditions and access to culture. They are sharing humanity. Since the killings of six Asian women – which have yet to be investigated as racially motivated hate crimes – it seems even more important to preserve these places that have been historic safe spaces for Asian Americans.”

Alienation is the focus of “Cultural Interloper,” by Stephen Li, who writes about ordering Korean food with his white college roommate and the purgatory of feeling neither truly American nor authentically Korean.

“We sat down and were greeted with a selection of banchan,” he writes. “As I picked through my favourites, he asked me what each dish was called and how it was prepared. His questions were intended for his edification or perhaps to oxygenate our relationship – in either case, they were well-meaning and innocent. I had little in the way of answers. I had never been asked to explain my Koreanness or know anything about Korean food beyond what I liked and didn’t. When our server came to take our order, she addressed me in Korean. I responded in English, having only understood annyeonghaseyo, and could see the disappointment splashed across her face. I have never felt more a stranger in ostensibly familiar circumstances than I did looking at her.”

The experience made him feel lost and untethered. “I was left in this wasteland between the two sides where neither wanted to claim me as their own,” he writes.

Reflecting on the collection of stories gathered together in Lunchbox Moments, Li says he hopes to nourish a sense of empathy and humanity, especially now in this time of heightened racially motivated violence. “Food is this universal thing,” he says. “I hope that we can come together around the metaphorical dinner table and read these experiences and see something similar in our lives. In sharing these stories, I hope that we allow people to understand us better.”

Lunchbox Moments zine is now available for pre-order. All proceeds the sale of this zine will go directly to San Francisco’s Chinatown Community Development Center, which is operates the Feed + Fuel Chinatown initiative to support Chinatown restaurants and SRO residents.