From Sergio Perez’s win at the 2022 Singapore Grand Prix to Daniel Ricciardo finishing in the top five, these are our favourite moments from the GP:

Like any Redbull fan, the most prominent supporters were hoping to witness Max Verstappen snatching the win. However, his teammate Sergio Perez retained his victory, despite the slippery conditions and five-second post-race penalty. In qualifying (the session determined where they stand on the grid on race day by the driver’s fastest lap times), Perez came after Ferrari’s Charles Leclerc and started the race on Sunday in P2.

The Singapore Grand Prix winner led the race after a thrilling start, which occurred an hour after the scheduled time. As he squeezed past pole-sitter Charles Leclerc, Perez commanded the race with over seven seconds between him and Leclerc till the chequered flag was waved. This was his second win of the season after the Monaco Grand Prix 2022.

Ferrari boys on the podium

Ferrari fans, rejoice! It was a double podium for Ferrari, and fans could not be happier. With Charles Leclerc at P2 and Carlos Sainz at P3, this massive win has earned Scuderia Ferrari good points. In the qualifying, Charles Leclerc earned pole position, while his teammate Sainz stood at P4, after Mercedes’ seven-time world champion Lewis Hamilton. While fans were hoping to see Ferrari snatching the win on Sunday, Sergio Perez finished strong when he got ahead of Leclerc, while Sainz beautifully went ahead of Hamilton and earned a P3. Despite the wet tracks, the Ferrari team made massive points and is currently second in the 2022 standings, after Redbull.

“Our pace was really good today, so it’s a shame to finish second. We had some wheel spin at the start and didn’t get away as well as Checo (Perez). That put us on the back foot. I pushed to put pressure on Checo, but my front tyres got a bit too warm, and he started pulling away. As I’ve already said, I want to use these last races to improve our execution of races, and I think that we made a step in the right direction today,” explained Charles Leclerc in Ferrari’s race report.

Carlos Sainz shared, “It was quite a strange race for me, to be honest. I had a good start and managed to get Lewis, but for some reason, I struggled with pace in the first stint with the Intermediates and only towards the end of the race did I recover it. But by then, it was already too late. We need to look into it because I’ve been quick all weekend and today I lost all feeling with the car. On a positive note, we managed to do a race without mistakes in these tricky conditions, which was not easy today, bringing home a solid result with both cars on the podium. We’ll go at it again in Japan next week.”

Both McLaren drivers in the top five

After the devastating announcement of Daniel Ricciardo leaving McLaren, fans were hoping for a miracle to witness Ricciardo on the podium. In qualifying, Lando Norris earned the sixth spot while Ricciardo stood at 17th with a 1:56.226. However, the team in orange strived to the finish as Norris finished fourth and Ricciardo in fifth after a disastrous qualifying. Seeing Ricciardo in the top five was his best finish since his 2021 Monza win. In an Instagram post, the driver expressed his happiness despite the tough final season in McLaren. Norris held off Max Verstappen throughout the race at a good pace before the Red Bull driver experienced a lock-up, earning seventh in the Singapore Grand Prix.

Six drivers retired from the race

Unfortunately, a few drivers were forced to retire due to the wet tracks from the heavy rainfall. Williams driver Nicholas Latifi, who is leaving the team after his contract expires at the end of the season, was forced to retire from the race after a clash with Alfa Romeo Zhou Guanyu. According to F1, “Zhou was attempting to overtake Latifi on a straight approaching Turn 5 and had sufficient room. Latifi pulled to the left, not leaving one car width to Zhou and resulting in significant contact between the cars.”

After the restart, Alpine’s two-time world champion Fernando Alonso challenged Max Verstappen on the track but was left with disappointment due to engine failure. His teammate Esteban Ocon was also forced to retire for the same reason.

Hublot to TAG Heuer, these are the collectable timepieces loved by renowned F1 racers
Style 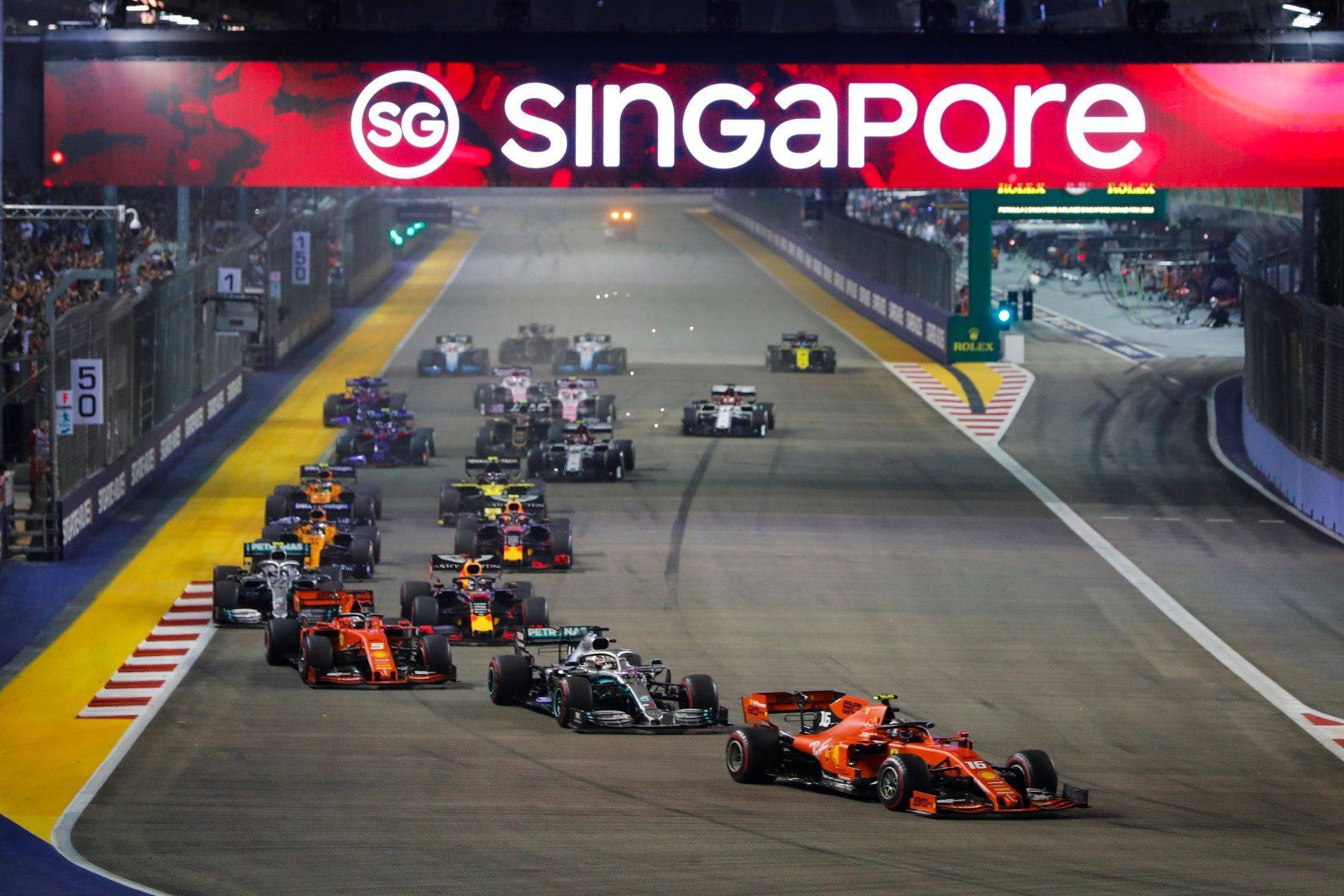 Latifi’s teammate Alexander Albon suffered a major loss of the front wing after crashing into a wall. After a series of safety cars, AlphaTauri’s Yuki Tsunoda was also forced to retire after a crash.

Fans were in for a treat as Fernando Alonso battled it out on the track against Max Verstappen. After a fantastic qualifying that earned him fifth place in the formation lap, the two-time world champion lost his position to Lando Norris. Due to Nicholas Latifi and Zhou Guanyu’s collision, the restart was a gripping race to watch as Alonso held off and defended his position against the charging Red Bull driver for nine laps. Unfortunately, due to mechanical issues, the performance between the two drivers came to a close when Alonso had to retire his car early on Sunday.

Sebastian Vettel, Max Verstappen, and Lewis battling it out in the top 10

While it was thrilling to watch Fernando Alonso and Max Verstappen on track, fans were delighted to witness the battle between Sebastian Vettel, Max Verstappen and Lewis Hamilton. Seven-time world champion Lewis Hamilton was left disappointed when he was forced to pit after damaging his front wing during his pursuit with Carlos Sainz for third place. As fans watched the thrilling chase between Max Verstappen and Lewis Hamilton, Aston Martin’s four-time world champion Sebastian Vettel was wheel-to-wheel with the other two drivers. The crowd went wild witnessing Vettel on the battlegrounds as this will be his last few races before retiring from the sport. He would have earned the seventh spot, but Max Verstappen overtook the driver on the final lap. In the end, Verstappen made P7 while Vettel stood at P8 and Hamilton in P9.

As fans made their way to the concert grounds after supporting their favourite teams and drivers, Singapore Grand Prix 2022 did not disappoint with its nostalgia-rich line-up of performers. Despite the heavy downpour, race delays and multiple safety cars on track, fans braved the rain and mud to groove and sing their hearts out in between and after the race with Black Eyed Peas, TLC, Westlife and Green Day.

Following the qualifying session, Westlife also announced their return to Singapore for their ‘The Wild Dreams’ concert in Singapore on 16 February 2023, held at the Singapore Indoor Stadium. If you enjoyed their concert at the Grand Prix or were bummed that you missed out on them, that will be your chance to witness them live again. Tickets will go on sale on 6 October via Ticketmaster.

According to The Straits Times, Green Day closed out the Formula 1 Singapore Grand Prix 2022 with a massive crowd of 65,000 avid fans, while Westlife pulled in an equally impressive audience of 60,000. Westlife fans basked in joy as the Irish boy band played their popular tracks such as “Uptown Girls”, “You Raise Me Up”, and “If I Let You Go”.