Pang Fu Wei is the most dashing baby boss 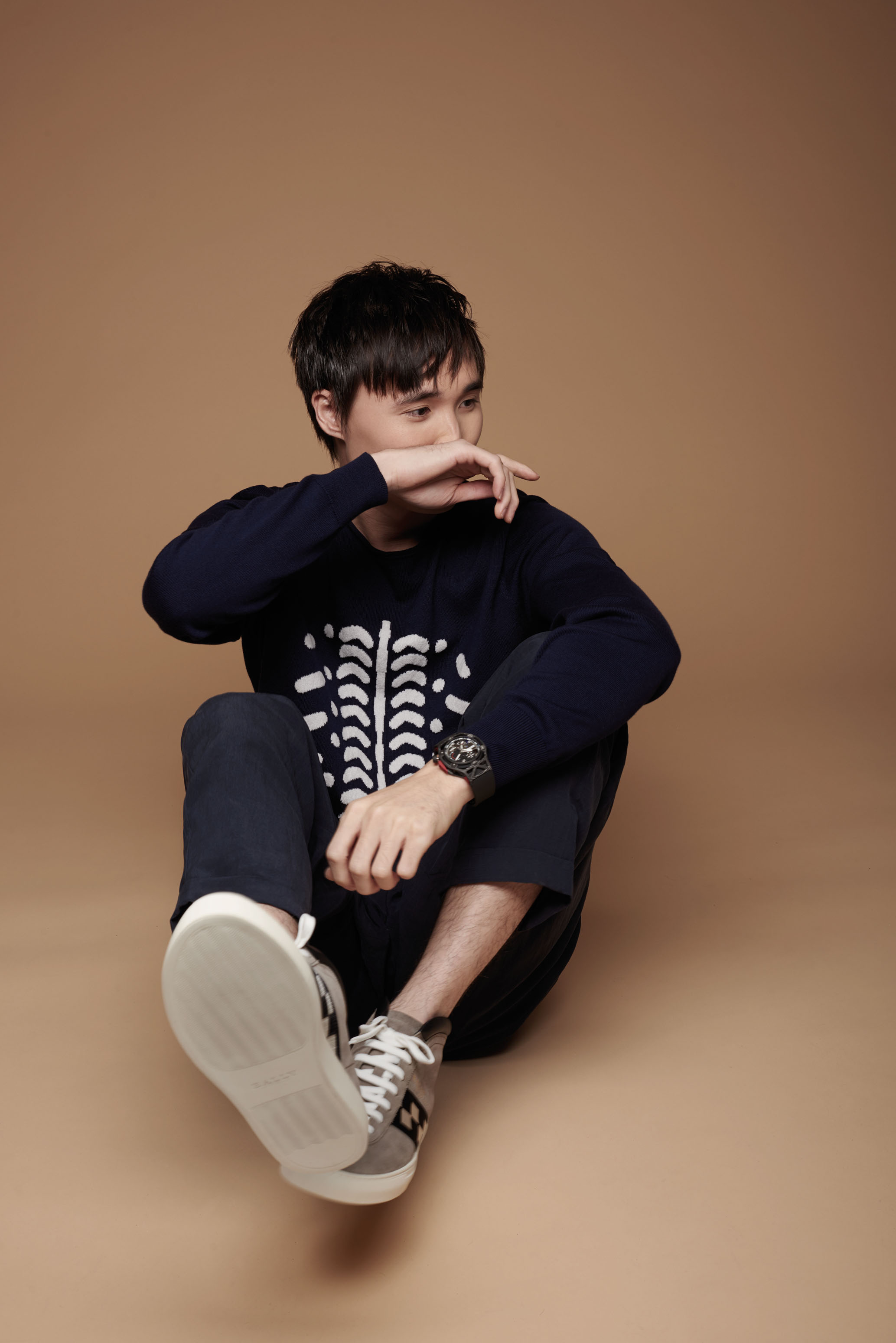 Pang Fu Wei has neither the gravitas you’d expect from a business mogul, nor the hyper energy that envelops new entrepreneurs. You’d think you were sitting across the table from a college student — albeit a very well-dressed one. Beneath the Dior jacket (which, by the way, comes with a hood), luxury timepiece and green leather dress shoes is a lanky young man with bookish black rimmed glasses, uncalloused hands and blemish-free skin.

It is easy to peg his type: Privileged.

Add the fact that the 29-year-old is now the managing director of one of Singapore’s largest baby retail chains after just four years in the business, and you might think him a textbook rich kid who had been handed the keys to a flourishing family empire without even needing to ask. Those who made it big with far less than he started with would be tempted to dismiss him. Don’t.

While it’s true that a position at his father’s company, Pang Kim Hin Group, which is best known for bringing Mothercare to Singapore, waited for him after university, Pang took no shortcuts to get to where he is today. “When I started working for my dad in 2013 he put me on a management training programme. I was rotated among departments including operations, marketing, accounts and warehousing, just to understand the processes,” he says. “After six months, I told him I learnt absolutely nothing.”

The beginnings of a baby boomer

As a then-25-year-old with a degree in neuroscience and behavioural biology, he knew he didn’t really understand Mothercare’s products, let alone its customers. “I suggested he gave me ownership over something instead. I told him to give me the Harbourfront store, our biggest, and let me see what I could do with it.”

So he took over as store manager, meeting customers every day and learning about the vast range of products the outlet carried. After a year, sales improved by 20 percent. “I worked very closely with the different teams and I was always setting mini challenges for the staff; creating friendly competition among the sales teams to give them a bit more motivation,” he explains. For example, if they managed to sell a particular product that hadn’t moved in a while, he would take them out to lunch. “It gave me the opportunity to get to know them on a more personal basis, and this way you also get to know who your top performers are.”

Pang took over from his second sister Shu Xin as managing director in 2017 and steers the Singapore operations while his eldest sister Shu Ming handles Malaysia. Besides managing the Mothercare franchise — which now boasts 14 outlets in the city — he also oversees the company’s distribution arm. He is also the youngest member in the Singapore chapter of the Young Presidents’ Organization.

“I didn’t start this company so I inherited a lot of legacy. It was actually Shu Ming who had to push the boundaries and set up the proper processes and structures. She was the one who also made the push to turn Mothercare from small-format stores to large-format ones, which my dad was against at first,” he recalls.

What could he bring to the already organised table, then? E-commerce. When he joined, he thought it was absurd Mothercare didn’t have a local online presence. So he spent half a year convincing his father it was imperative to go down that road. “He didn’t believe it would make money, and that it would be too expensive. But I told him to take a step back and think about how much he thought e-commerce would make us, then we reverse-engineered how much we were willing to invest in it. After looking at the figures, he was willing to lose that money if it didn’t work out.”

Thankfully, it did. After spending a year to set up the e-commerce division and launch the online store, which is also backed by Spring Singapore, the two-year-old site has registered a 60-percent growth in revenue.

“The retail industry is facing strong headwinds and competition remains intense,” he says. “As an organisation, we have gained over the past 30 years insights into the mother, baby and child industry, and a strong network of global industry partners and friends.” Leveraging on these “to reach scale quickly”, Pang conceived Snapkis, an in-house brand that’s spawned bestsellers such as baby car seats and wet wipes. He lets on about two innovative products slated to launch next year but remains tight-lipped on specifics.

That’s a lot to achieve in just four years, but Pang believes he’s still working on his greatest achievement: Restructuring the entire organisation to become more digitally focused. “If we stay stagnant, the business will fail,” he states simply. “I want my legacy to be for the people who work for me to become better. I have a strong sense of responsibility to my family and staff, and I get a great sense of satisfaction from doing things well.”

SEE ALSO: Vernon Tan and the queen of vending machines

His obsession to details

Though well-off, Pang is no stranger to hard work. He helped with the company’s menial tasks whenever he returned home from boarding school in Perth during the summer holidays. After high school, he decided to work as a waiter at the Highlander Bar & Restaurant. His meticulousness quickly earned him a promotion to bartender. “I was so particular about everything, they let me run the bar. I’d make sure it was always clean, the glasses would all face the same direction, and I rearranged all the bottles according to price point. They had no trouble giving me a lot of responsibilities.”

His friends think his obsession to detail peculiar. “I’m particular about the most ridiculous things,” he quips. “I sort my wardrobe according to type, then occasion, then worry about whether to arrange them according to an RGB spectrum or include a section for greyscale.”  When he offered to be responsible for home automation during the recent renovation of the family home, he obsessed not just about the selection of the systems and hardware, but also about the colour of the light switches.

Unsurprisingly, it’s a trait he brings to the workplace as well. He does not tolerate presentations where graphics or charts are not consistently aligned from slide to slide, unless his staff were really pressed for time. “Good design is meant to make life easier,” he justifies.

But don’t confuse his fastidiousness with being overbearing. Micro-managing has never been his leadership style. He doesn’t enforce a dress code at the office either, and turns up fully draped in Uniqlo threads. “It’s practically a uniform: Blue pants, grey T-shirt and a hoodie. Unless they’re going out for meetings, I want my staff to be comfortable, too,” he says. He regularly meets up with teams he used to manage to see how they’re doing, which is why the most challenging part of the job is having to let people go.

“I had to fire someone for the first time this year. It was the hardest thing I’ve had to do in this job,” he says. “But I have the big picture in mind, and if middle management tries to stonewall the execution of that vision, I have to sacrifice them for the good of the company.”

This calm rationality comes from a scientific mind. As a lover of chemistry and biology, Pang topped the state for the latter in a national exam when he was in high school. A self-professed geek, he still follows numerous science blogs on social media.

“I wasn’t allowed to watch much TV growing up, but I did watch a lot documentaries on Premiere 12. I especially love David Attenborough,” he says. At 11 years old, Pang was the youngest nature guide at the Sungei Buloh Wetlands Reserve.

There isn’t much crossover between natural sciences and baby products, but Pang appreciates the benefits of his education. “People go to college to get a mental framework on how to collect information, on how to learn. And studying neuroscience has helped me become very comfortable with data. Businesses are really just big experiments. You look at data, find a pattern, form a hypothesis and look for results, such as seeing how a new campaign turns out. It’s just a lot more dynamic.”

In the maternity world of cribs, daipers and nursing bras

But how did it feel for young single man like Pang to get thrown into a world of cribs and nursing bras? “When I worked at the store I ran through pregnancy checklists of parents-to-be. I asked them about parenting philosophy, what breast pump mothers wanted, how long their maternity leave was, and so on. They gave me weird looks, wondering how a guy in his mid-twenties could know so much about the pregnancy journey,” he said. “But when I joined the business, I simply saw it as a medium to acquire a skillset. It could have been any other industry.”

He hasn’t caught baby fever, though. While the Mothercare managing director loves spending time with his sisters’ children, he enjoys his thrill-seeking hobbies far too much at the moment. He loves diving — both scuba and sky — and travelling, and frequently steals away for weekend trips to decompress. “At home, I’m listening to music — piano, classical or jazz — from the moment I wake up to till I fall asleep at night. I also have headphones on at work. Music puts me in the zone and it helps me concentrate.”

His career path seems set, but that hasn’t stopped his father from working on succession planning. Dad has even drafted a family constitution that spells out their family values and will serve as a guideline for how to work together. “I’m analytical, detailed and I thrive in structure. I’m a strong director and communicator but my weakness is my constant need to gather more information to make the best decision. Because of these strengths, my father hopes I will become the CEO of the organisation in the future,” he says.

The succession plan and constitution aren’t restrictive by any means, so Pang doesn’t feel the pressure to take the reigns right away, if at all. “If we’re interested to pursue a different career or ambition, we are free to do so. If we wanted to bring in a hired gun to manage the organisation, we can do that as well,” he says. “It doesn’t really matter to me who succeeds the family business. What’s more important to me is the freedom to pursue my interests. When the time comes, and if I’m the best person for the job and it’s aligned with my goals, I will fight for the position. It’s true I’m privileged. But I’m not cocky or arrogant. I work very hard and I just want to wake up every morning excited about the day ahead.”