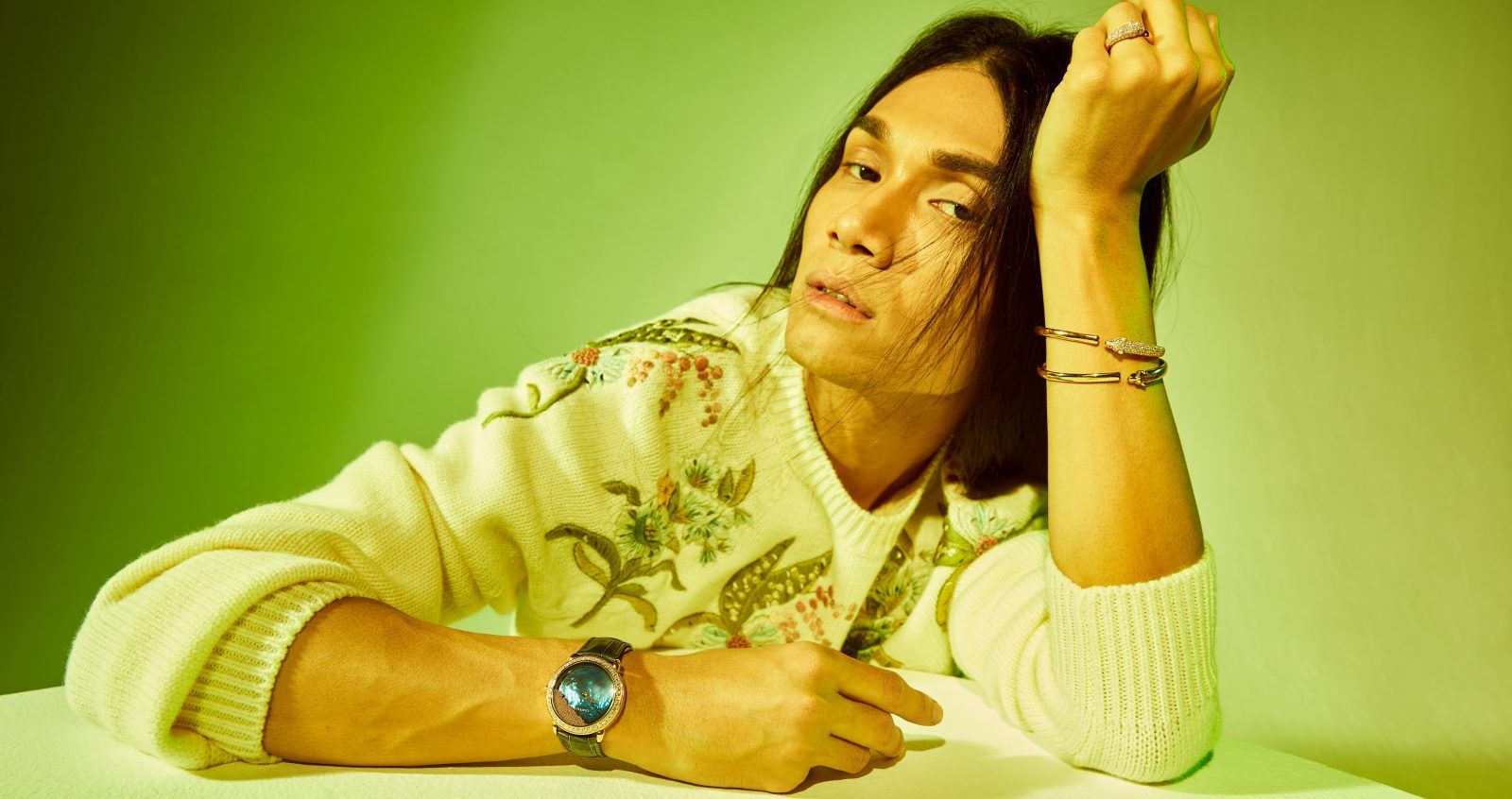 Androgynous. Bold. Confident. Defying the norm with his fluid fashion is none other than Nazreem Musa, our Prestige 40 Under 40 alum who now graces our September cover and shares his keen sense of style with us.

“I think fashion is a self-expression of who you are,” the 33-year-old says. “The way a person dresses is the first impression he or she gives to the world. For me, being able to express myself, it has made me truly happy.”

He names his mother as his icon, having inherited his passion for fashion from her and often accompanied her on after-school shopping trips in his younger days. He states that he learned everything from her, from proper mannerisms to being graceful and dressing well. Datuk Maziah Musa’s great fashion sense has undoubtedly rubbed off on not only her son, but also daughter Ummi Nazeera.

Nazreem says of his actress sister, “Growing up, we both loved the Olsen twins, Mary-Kate and Ashley. I’ve always been ‘the Mary-Kate’, more relaxed. She’s very polished. So, they complemented our respective tastes in fashion.” He adds that as the two of them have a tight relationship, sibling rivalry has never been much of an issue.

Nazreem started garnering netizens’ attention a few years ago, when he began posting photos online that showed off his fluid fashion. Many were surprised and amazed by how he managed to pull off dressing up in outfits that disregard traditional gender constructs. Of course, peppered among the praises he received were derogatory remarks regarding his fluidity. However, over time, positive comments and support do outweigh the negative.

Asked about how his fashion sense has evolved over the years, he replies, “Back then, I was more enthusiastic when it came to my fashion sense. I was louder and more experimental. Now I feel like I’m going towards more classic, but my silhouettes are still pretty much the same. Avant-garde but more chill than before.”

Online recognition eventually manifested into a modelling profession for the bold young man, as more and more labels approached him to model for them and he’s now worked with some of the nation’s major names in fashion, such as Alia Bastamam’s eponymous brand and Dato’ Seri Dr. Farah Khan’s The Melium Group. He most recently walked the runway for the two designers at last month’s Kuala Lumpur Fashion Week (KLFW). He reveals that he turned down offers from other brands as he wanted to focus on the two. “I was asked by more but I feel like this year, because it’s my first time, I really wanted to make it special for Alia and Melium.” Adding that he was honoured, he shares that a lot of discussions went into his KLFW looks, “They really just wanted me to be me.”

Prior to walking the KLFW runway, Nazreem previously was named Most Fashionable Male Personality at KLFW 2021’s inaugural Kuala Lumpur Fashion Awards. “I feel like that recognition really helped build me as a fashion person in this industry. I must thank Mr. Andrew Tan for honouring me with that title because I feel like, with that, people now will no longer question what I am all about. So that was something that I will truly cherish and I will keep forever with me. And I was really surprised as well, I was not even told that I was nominated, so I was really shocked.”

This year, he played an important part as a Fashion Gatekeeper for KLFW. “For me, it has been about how much I put myself out there for KLFW, how much I’ve been promoting KLFW with my fashion sense. To make it really fun for everyone. Previously, people were still scared to really dress up at KLFW. But now, people are going all out and it’s the only time of the year that you get to see people wear all sorts of fashion; really colourful for KL.”

When not found strutting down runways in designer garbs, Nazreem can be found donning suits and tie for his corporate meetings. He currently serves as the Managing Director of his family’s company, which supplies furniture and raw materials to schools and hotels, and mattresses to The Malaysian Army and The Royal Malaysian Navy. His sister, meanwhile, serves as the Executive Director who handles more of the MoschinoPR side of things while he handles the financing and management side. “Currently, we are working towards more green products like kenaf, it is a substitute for wood. We are trying to convince the government to change everything made from wood to kenaf because it only takes four months to harvest, as compared to a tree, which takes 12 years.”

It was his work with kenaf, or Hibiscus Cannabinus L., that earned him the Most Innovative Young Entrepreneur accolade at SME & Entrepreneurs Business Awards (SEBA) 2017. Not a surprising fact given that it was his entrepreneur spirit that landed him on our 40 Under 40 list more than a decade ago. Also not surprising is his admittance that another decade down the road, he might be focusing more on his family business. “Mum has always been like, ‘Okay, you and your sister, you can always do whatever you want, I will not stop you, but you also have to focus because I built this for you.’ So I believe in the future, I’d be a more serious businessman, but fashion will always be something that I live and breathe,” he says.

“Fashion is changing and people are starting to understand, and the scene is bigger compared to before. So, I’m really thankful that I’m witnessing all this,” Nazreem says of the ever-evolving fashion scene in Malaysia. “If fashion makes you happy like how it has made me truly happy, you should go for it and don’t be afraid of what people would say,” he advises budding fashionistas. “If I were afraid, I would have never gotten to where I am today. I’m really thankful that I stuck to who I am and kept walking that path. Just as long as it doesn’t go against your beliefs and your faith, go for it.” 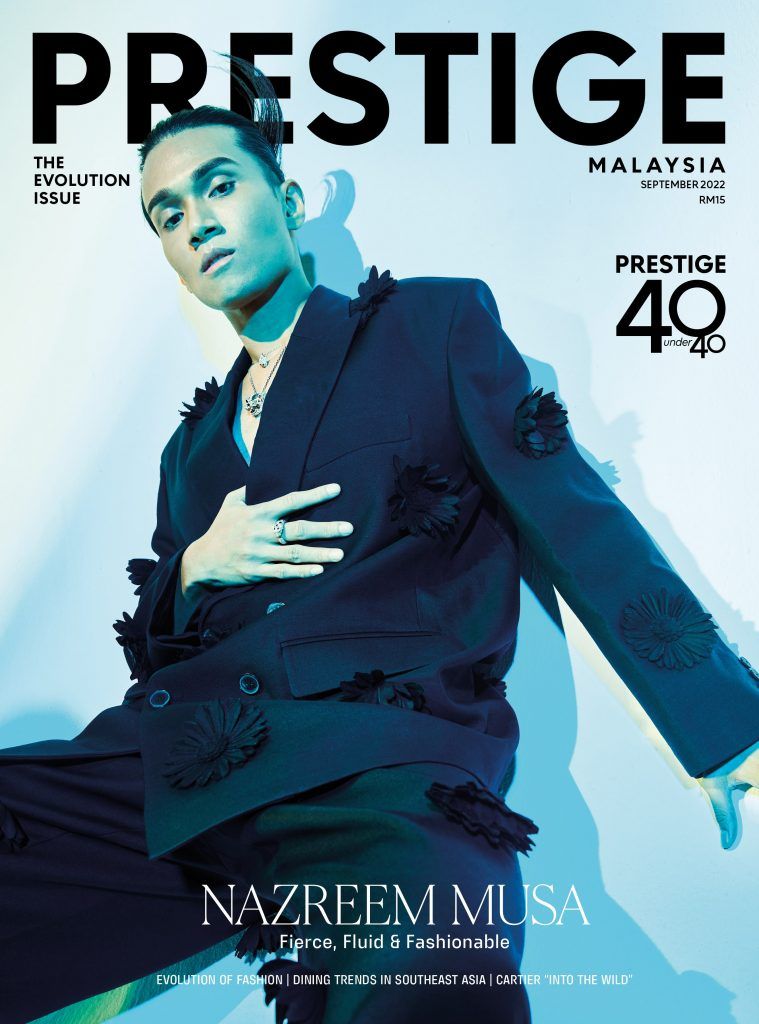 This cover story first appeared in Prestige Malaysia’s September 2022 issue. To read the full story, pick up a copy in store or subscribe on Magzter.