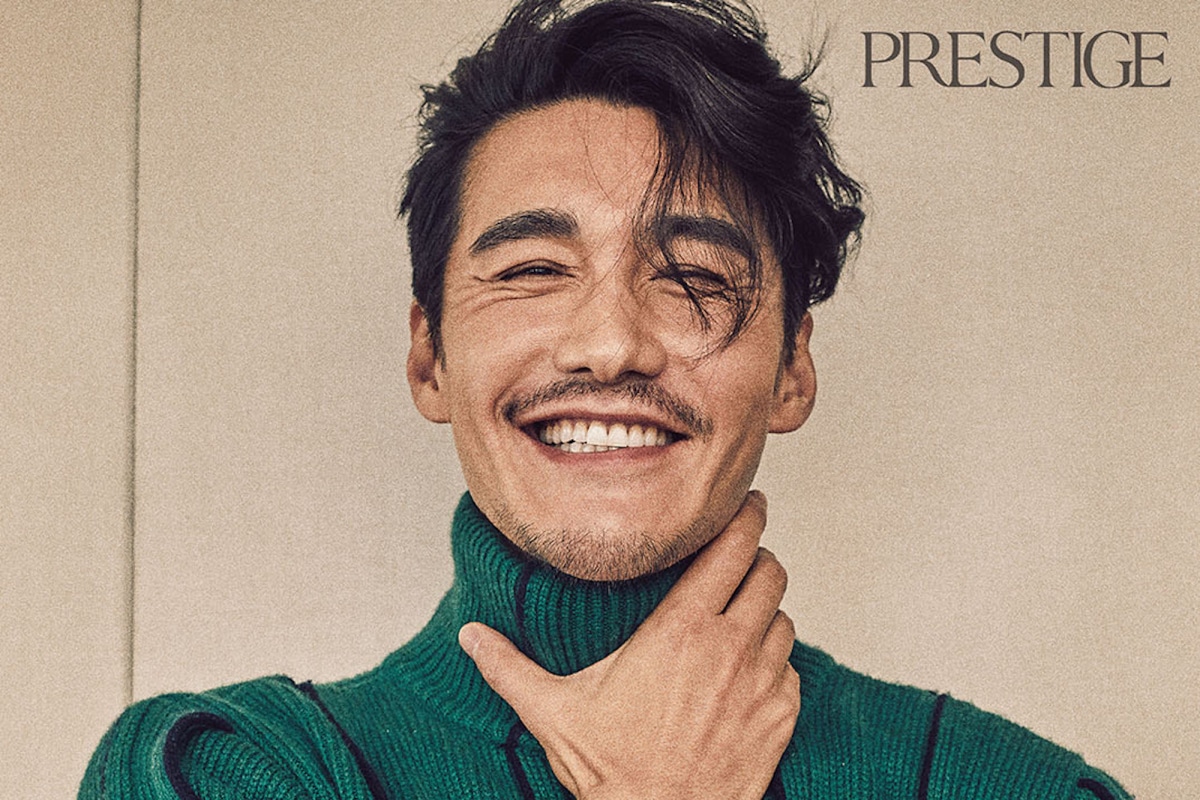 “I can converse in cantonese,” assures the man draped in a fluffy, snow white robe. What entails is a collective sigh from the crew as we were debating whether the photo shoot should be conducted in its entirety in Mandarin. How does one instruct Hu Bing to look intently at the camera while remaining effortless in Mandarin? The 47-year-old pulls back a chair before slumping into the seat overlooking the Forbidden City, partially shrouded in Beijing’s chronic smog. As the hair iron snaps onto his jet black hair, Hu cracks a joke, “Does anyone feel cold?”

“Ever since I lost weight, I have been feeling cold all the time,” he says with a wry smile. Weight loss and getting in the right shape is part and parcel of life for the model-turned-actor/ singer. A fashion house has enlisted him to walk the runway, along with more than a hundred models and influencers. That means heeding advice to rid the deltoids of excessive muscles and shed 5kg in three weeks.

Hu’s candid and unfeigned mien underscores his reputation for being loquacious and “nice to the media”. It is a fine art that seems to have lost on the prevailing generation of influencers and fledging artists whose bankability relies on a larger-than- life mirage and judged by virality on social media. It is a savoir-faire only a bona fide A-lister has perfected. We breeze through a dozen looks. Hu slips in and out clothing without grumbling and not once his publicist and manager impedes or protests. They are mere spectators of his professionalism. Perchance being an athlete and model has moulded him into such.

Prior to modelling, Hu was a rower who represented China at the highest level, including the 1988 summer Olympics in Seoul. Curiousity got the better of him as he mingled with athletes from different parts of the world. He began to take notice of rowing suits of various cuts and colours. Consequently, he started to exchange and amass a collection of memorabilia. “My coach remarked that I was foolish to swop my Adidas suit for an Italian one whose maker no one had even heard of,” Hu says with a laugh regarding an incident at an athlete’s flea market. But that didn’t deter him as he confesses that the blue piece is his favourite rowing suit and it is still in his possession.

With an intrinsic eye for good design, it came as no surprise he would venture into modelling when an enforced injury curtailed his budding athletic career. Hu was barely 20 years old when he was mandated into retirement. His 189cm frame made it an easy, if not overt, choice. “I love the ‘80s and early ’90s, hence I wear a lot of fashion items from that era,” Hu opens up on his personal style. In spite of being a model and hence the obligation to tote whichever piece of garment dictated by designers and trends, privately, he remains an ardent fan of old fashioned apparel. His closet always has room for one more jacket. “The ‘80s had a lot of great designers. Valentino was one of them,” he justifies the reasoning behind his answer. On top of that, he adds, Tom Ford’s past work for fashion houses Gucci and Yves Saint Laurent continues to withstand the test of time and remain timeless.

Nonetheless, Hu wasn’t always as entrenched in the sartorial look. It was a gradual process, an evolutionary discovery. When he first entered the industry, muscularity was the big thing, spearheaded by the likes of Versace. These days, being slender is in vogue. “Back when I was an athlete, I didn’t know what fashion was. I only knew what I wore looked good,” Hu reminiscences. Upon taking up acting, he grew to become exploratory, trying everything that was new at the time.  “Roman Tam, who was my mentor, gave me a transparent rain coat, paired with a pair of yellow and white trousers, a matching pair of shoes and a tank top. I wore it in my first music video. I wore it at my first live performance. I thought it looked good on me,” Hu says, adding that he once dyed his hair blond, red and used to sport a pony tail.

When he turned 27, a corporate directive put a halt to the experimental phase. The emphasis was now on charting his own style. If he was clad in just a white shirt and blue jeans, he had to emanate his own personality in order to pull it off. He was subsequently shipped to New York for further study. Mingling with the more unreserved Americans, a value often seen as confrontational in Asian culture, it dawned upon him that cogitation was vital to shaping a person and his personality.

“My manager was fabulous. He gave me an advice that an artist had 100 foibles. If you had 50 or more, you would not be a superstar. I pored through the check list. One of it was, for instance, if you feel unhappy whether the public recognises you or otherwise, that is a displeasing state of mind. “Another scenario is at the dining table. In order to garner attention, you start to talk about yourself and your many achievements, that is also a faux pas,” he shares, adding he actually pulled out a pen and began ticking away at the list. Upon reaching 60, doubts creeped in and he thought he would not be a good fit.

“My manager consoled me. He said to become a gentleman, it takes 20 years. You are lucky that you are only 27. If you start now, it isn’t too late,” Hu shares. His manager exorted him carry a jacket. He was told, a jacket is the best tool a man could own as it helps to sculpt a person’s thinking and pursue what the mind has set upon. The jacket has become a great source of motivation as he aspires to be a gentleman, a coveted status he says he hasn’t yet graduated to.

Recently, Hu was appointed as Corum’s global brand ambassador. It is almost too good a coincidence for him to be wearing a maritime-inspired Admiral chronograph. He is someone who truly fathoms how huge a divide a second is being an erstwhile rower. It is the exquisite Golden Bridge, however, that demonstrates how far he has come and matured as a person. “My father gifted me a stainless steel watch when I turned 20. He said, ‘this watch is to commemorate your coming of age. It is a representation of the responsibility that comes with adulthood. Without it, people might think you are still that snotnosed kid,’” he says, admitting it was his first mechanical watch. Prior to that, he only wore performance-driven electronic watches.

The significance didn’t lose on him. Hu feels every man should own a watch when he turns 20 as it marks the onset of working life. Throughout his career, he has had to work with many watches, some with more diamonds than the others. One day, a watch brand took him for a visit to the manufacture, hence imparting the wisdom to him to look beyond superficiality and at the importance of the movement of a watch. “Besides telling the time, a watch is also an extension of your personality. Wearing an opportune watch at the right occasion is key. It is not about what’s a la mode this year, how many diamonds are set on the dial,” he says.

Displaying a mischievous side, he once engaged in a banter over a watch worn by a friend. “Do you choose to wear this watch because you want to show off? To which he denies. Do you want to let others know how well off you are? He rebukes with a no. Do you want your eclectic side be known? He then questions why I would say so?” Hu narrates, adding the friend reprimanded him for asking three questions he didn’t take kindly to. “Because that’s the vibe you give by wearing that watch,” Hu bemoans.  His advice to selecting a watch is to examine the movement. If the movement is resplendent and the design is refined, it matters not how many gemstones the watch has, how popular the brand is and how recognisable it is.

“A watch is like a perfume, you don’t apply whichever that is the flavour of the month onto yourself just because it is popular; It has to be an embodiment of yourself.”
Hu Bing
Cover Story Corum cover story 2018 hu bing cover story December