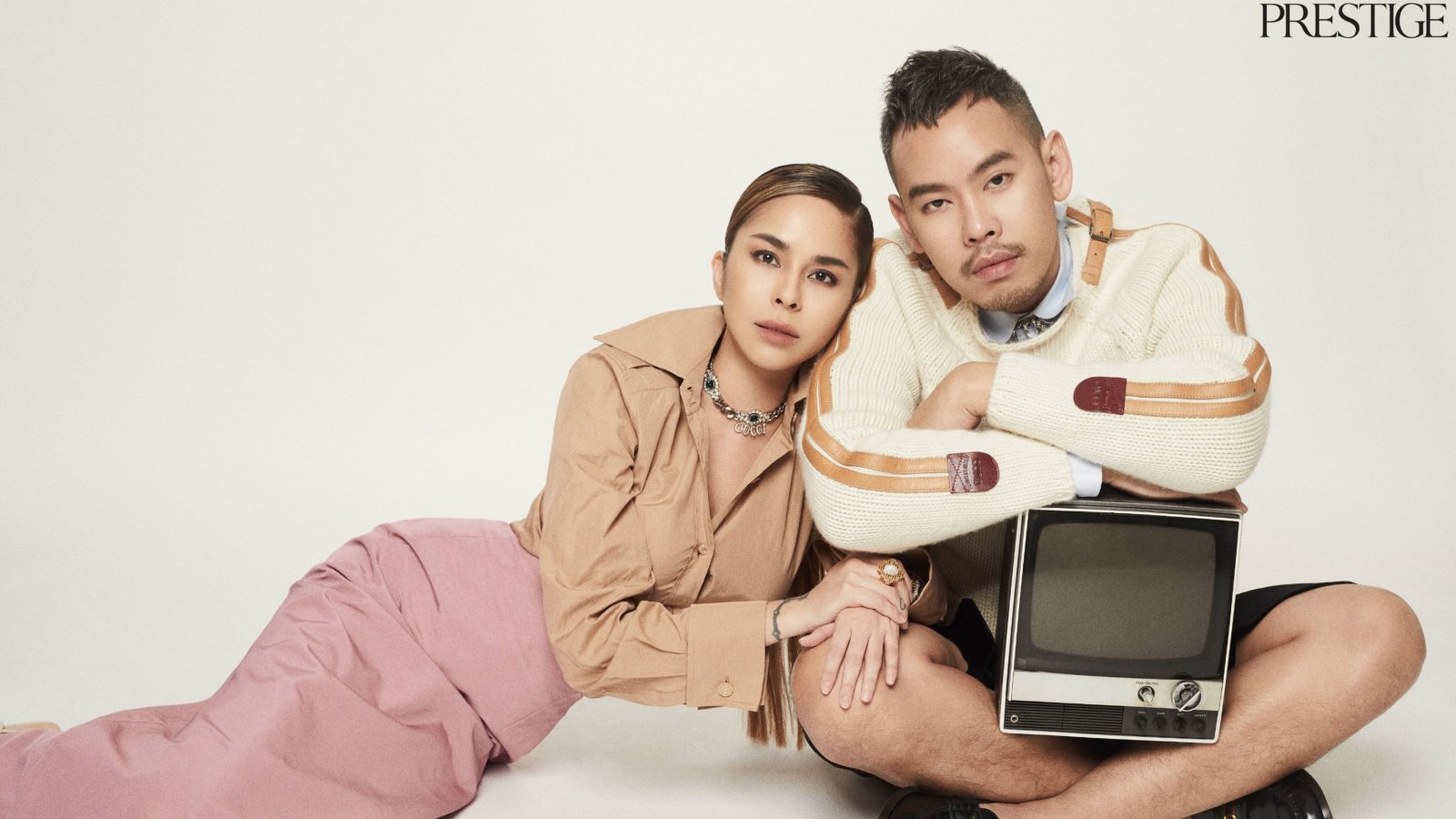 In their first interview together, fashionista Kim Raymond and filmmaker Zahir Omar reveal their individual journeys of discovery, and talk about what being parents and pursuing a relationship is like in this new age. 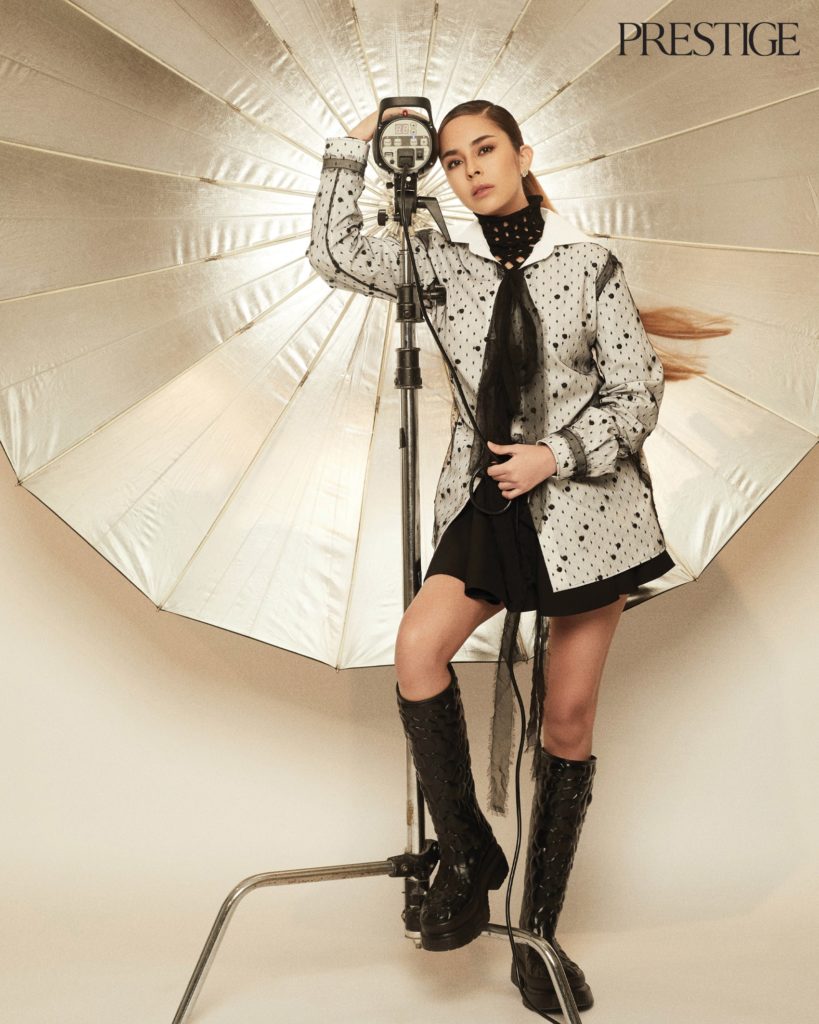 As Kim Raymond saunters in for our shoot looking as fashionable as always in her comfortable yet chic style, her megawatt smile immediately lights up the room.

A familiar face to stylists, makeup artists and photographers in the fashion industry, Kim waves hello to everyone like old friends who are reunited once again. So what makes Kim so effortlessly loveable to many? Luckily for us, she opens up about what her life values and childhood as a middle child growing up in Subang taught her as an adult and mother.

“I was actually a very good girl in a normal household. Not problematic and definitely didn’t experience any middle child syndrome,” she laughs, admitting to the fact that being the only girl with older and younger brothers probably didn’t starve her of any attention from her doting parents.

When her father, Dato’ Sri Jeffrey, the executive chairman and managing director of OEM Autoseats Malaysia, was busy building his empire for his family, her mother spent a lot of time nurturing Kim and her brothers.

Always having her nose in a book, Kim soon discovered her love for fashion like most women do, but right after secondary school, her father suggested she put her brains to good use with something more challenging like computer science, a sector that was growing exponentially at the time.

“I really tried. But it was rather challenging, and I realised it was not my calling,” says Kim.

Finally pursuing her passion, Kim ventured into studying fashion design at Limkokwing University and marketing and management at Raffles College for a 360-degree approach to upskill herself for the industry she loves so much.

“Since I was a child, I wanted to be able to design but I got really interested in the business side of it,” shares Kim.

“This made me think that maybe I don’t have to stick to just fashion, but other industries as well,” she adds.

Apart from her previous styling stints and being a regular face at fashion events, Kim had also dabbled in a shoe collaboration with local footwear brand Merrack & Co and opened a restaurant with her brother. The latter venture had closed after a while, but the experience Kim gained for having had a hand in it was priceless.

Her next project – an ongoing one – is her 4-year-old daughter, Skylar, from her previous marriage with local actor Keith Foo.

“When I had Skylar, life changed. At one point I stopped going out for events, just to prioritise her,” says Kim.

Being a mother has opened a new defining chapter for Kim. Having chosen to dedicate her time to nurture Skylar is something that she is most proud of.

“Motherhood is everything to me. I believe many other mums out there need to hear this. The dynamics of being successful have now evolved into what you believe is your true calling, and not just the pursuit of monetary gains,” shares Kim. 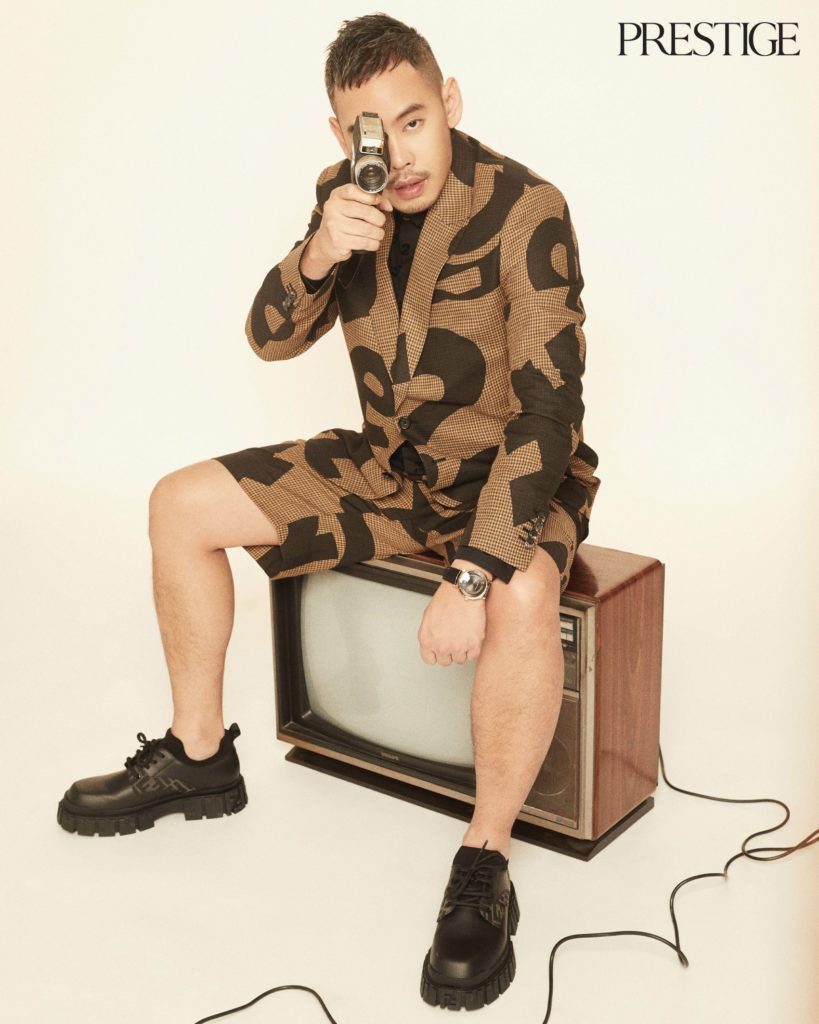 Zahir Omar comes across as the fun guy you would want to have as a part of your circle of friends. Constantly cracking jokes and drawing laughter in the room, it’s no wonder Kim is seen smiling all the time.

The Bangsar boy recalls how the area was very different growing up as a child. It was in the early stages of development from being an oil palm and rubber estate.

Hailing from a family heavily involved in film, Zahir’s father worked in advertising as an art director while his mother was a makeup artist. Together they then launched O.M. Films, the ‘O’ for his father Omar, and ‘M’ for Maureen, his mother.

“You could say that since the day I was born, I have always been on set,” says Zahir.

As he was a troublemaker in school, his regular punishment was to clean all the equipment in the studio surrounded by bright lights and cameras and this only made him love the industry more. Despite that, Zahir’s father advised him against following in his footsteps. However, always the rebel, Zahir did exactly that.

“I went off to college but decided it wasn’t my thing. So, I went on my own path and ended up working for the late Yasmin Ahmad as the second Assistant Director,” says Zahir.

Working on the 2005 film “Sepet” was truly an eye-opening experience for Zahir. At a time where there was no social media, he recalls a particular moment where he had to drive to Ipoh to cast 200 people for the film.

“Being in a film wasn’t really a big thing to be part of back then, and so we had to go around town finding all these people and explain the film to them one-by-one!” says Zahir.

The culturally significant feature found great success both locally and internationally, and Zahir cheekily reveals that he also managed to make his film debut as a VCD seller in a short scene.

Fast track to 2007, Zahir took a chance joining the BMW Shorties short film competition. His film eventually won, giving him funding which allowed him to make another film.

“I still remember. The theme was ‘Mobility’ and so me being me, I challenged the quota and made my film about a dead guy who had the ability to move. It was for fun, but it won!” exclaims Zahir.

Following that, Zahir spent 11 years sharpening his skills in Indonesia. It gave him the chance to gain recognition as a full-fledged Indonesian director where there was constant work for him.

“I always thought to myself, if you want to grow, you have to be in unfamiliar territory,” says Zahir.

It was 2018 when he finally returned home to make “Fly By Night”. The neo-noir thriller that featured a multicultural cast set in Kuala Lumpur was predominantly in the Mandarin language.

Despite not making it to blockbuster status, the film received great reviews for its fresh take of what a local film could be and had its world premiere at the Busan Film Festival in South Korea.

“Being of a mixed Malay-Chinese parentage, the concept felt natural to me. I wanted to chisel away the layers of races, class status, nationality. I don’t see that a lot in Malaysian films,” reveals Zahir, who believes that there is a big diaspora of Malaysian talent that find success elsewhere in the world but home.

As a father to two young daughters – Zoe (11) and Nyla (8) – with his previous partner, Zahir spends a lot of time watching films with his kids, and part of the fun is discussing all about what they think after. Could he be raising a new generation of female filmmakers? Only time would tell. For now, being a good father and co-parenting them with their mother is an important foundation. Forming stronger bonds with them especially during the lockdowns was a great opportunity for them as a family.

“They are really good kids and yes, we watch a lot of films together. They are going to be huge film fans for sure,” says Zahir.

MEETING OF BOTH WORLDS

It was during an audition for Zahir’s “Fly By Night” that Kim and Zahir first met, but the brief encounter was soon forgotten.

“I was actually really busy that day, and when we started dating, Kim reminded me of that moment years ago when she was there and said I seemed stuck-up. So, I apologised to her,” laughs Zahir.

Since then, it was only two years ago that the pair met again through mutual friends and started forming a friendship.

“We enjoyed each other’s company and talking to each other. We found that we had many similarities, especially the fact that both of us have our own kids,” says Kim.

“Having someone like Zahir understand my role is great. It is not easy to find someone who is not selfish and I’m thankful that he is very kind-hearted,” she adds.

Individually, both Kim and Zahir are great examples of what co-parenting with their previous partners should and could be. Managing a good familial relationship for their children is a testament that a nucleus family is not the only type of acceptable family especially in this day and age, the best kind of family is what you make of it.