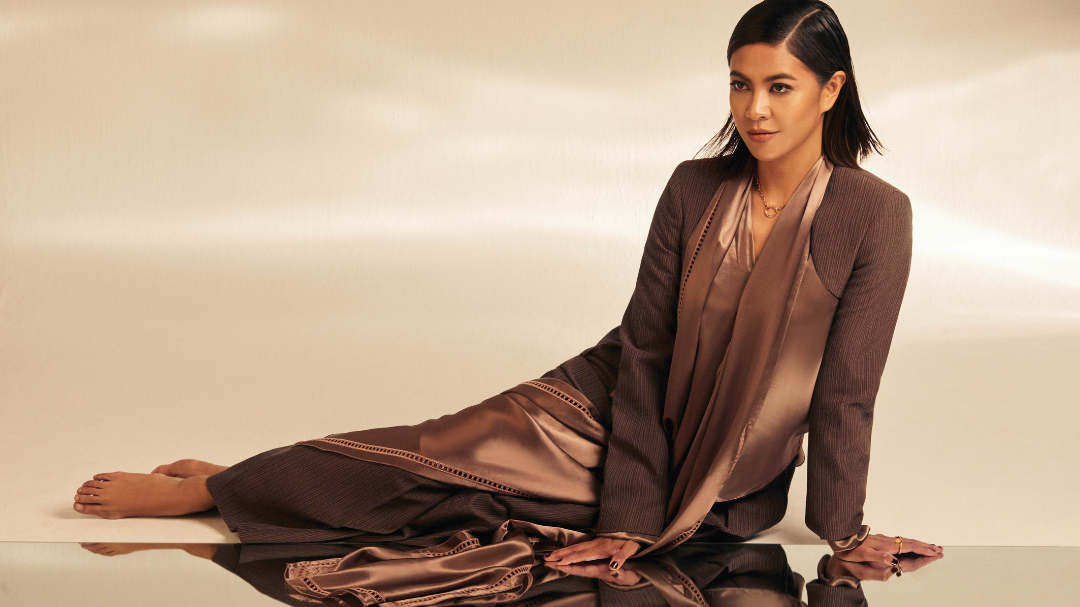 With her sleek ‘do and glowing skin, Nadiah Wan immediately draws comparison to Zendaya from everyone the moment she steps on set in a pristine all-white ensemble. Laughing, she wittily remarks, “Zendaya is secretly Malay.”

Her demeanour bright and easy-going, she steps in front of the camera and begins facilely striking poses. More used to being the one “barking orders”, as she jokingly admits, she manages to all the same go with the photographer’s flow and smoothly transition from one pose to another.

Born Wan Nadiah Binti Wan Mohd Abdullah Yaakob, though more widely known as Nadiah Wan, the 37-year-old is no stranger to being in the spotlight. Not that she goes around seeking it, but her charisma and charm naturally draw people in, as evidenced through the professional yet comfortable atmosphere she’s created as the photoshoot progresses.

At an age that many would consider young for such high positions, Nadiah is currently the Chief Executive Officer (CEO) of Thomson Hospital Kota Damansara and the Group Chief Executive Officer of TMC Life Sciences Bhd. Unequivocally a woman of many hats, she is also a Director of the Institute of Corporate Directors Malaysia (ICDM), a mentor with global nonprofit organisation Endeavor, and – in the little spare time that she has – she interviews students who are applying to her alma mater, Harvard University.

One would be mistaken to assume, however, that having such a multifaceted career would lead to her having lesser time to spend with her loved ones or even just with herself. On the contrary, she has taken up two new hobbies, cycling and learning to play the piano, to “keep life interesting” during the many lockdowns the nation has faced. She laughingly shares she became inspired to learn to play the piano after watching the series Lucifer and has gone on to purchase a piano off Shopee for this exact purpose.

When asked if she expects her daughter to follow in her footsteps, though evidently hers are big shoes to fill, one would almost anticipate a “tiger mum” reply given her own impressive track record. Instead, she once again demonstrates her progressive side, saying, “I think what we try to do is encourage her to develop as a person, I guess we’re respecting her in terms of what she wants to do but we’re also setting ground rules. Because the whole point is that we keep telling her, this is training to become an adult, so we talk about responsibilities and accountability, exploring why she likes or doesn’t like certain things.”

“I think they’re growing up in a very different world, so I think the traditional school system may not work for them anymore. Her school has a very interesting concept, where, before you ask the teacher for the answer – they call it 3B4G – first use your brains, or find the answer in a book, or ask your buddy. And I thought that was very interesting because we need to teach people how to find information, make decisions for themselves, decide what is right or wrong, whether news is fake or not, and have that independence to seek out information rather than relying on the teacher to give you all the answers.”

This no spoon-feeding approach by Acton Academy, an innovative school with an American-based education system, proves to be effective as little Sophie seems to already be absorbing knowledge that transcends her young age – not many six-year-olds would choose to write about Marie Curie for their school project.

In regard to students whose education has inevitably been compromised by the pandemic, she believes that their future is salvageable. “I think we pretty much have lived through unprecedented times. For example, I interview students applying to Harvard and even Harvard has left a lot of their entrant exams requirement, like the SAT, because they recognise that it’s been difficult for students.

“I think that it’s been rough but it’s also an opportunity, they have lived through something that none of us have ever experienced and the question is ‘what did they do with that?’. The world is changing, people are transitioning to more virtual stuff. There are also new careers that have opened up. There’s a lot of opportunities there and it’s really about what these kids are going to do and I think that our job as adults is to facilitate that, for them to reach their potential and I hope that we can rethink the way we see things because the traditional way is not going to be good enough.

“I’m a big believer in vocational education as well, even in the hospital we try and hire a lot of kids who come from vocational schools. There are people who will have white collar jobs and work online, and there are a lot of people who society needs, that have technical skills, work with their hands, and I think we can do a lot to help these kids develop. Like, not everybody enjoys going to university, right? My kid doesn’t even like to read, I don’t even know if she’ll be going to university. But I mean, if she’s able to do something, be creative, something with her hands, that’s still something that society needs.”

Recalling her days as a student, she achieved 9As in her Sijil Pelajaran Malaysia (SPM) examination in 2001 and went on to receive a scholarship in 2003 to study Biochemical Sciences in the United States for four years, after completing her pre-university studies at Universiti Teknologi MARA (UiTM). When asked if she ever feels pressure from her constant exposure in the media, be it for her studies or her achievements in her career, she replies, “The thing is I always try to have this opportunity to talk, especially to young people, and I’ve actually even had people come back to me and say, ‘Oh, you know, I met you before and listening to you changed my life and gave me courage to do what I wanted to do and go to the US’, stuff like that. Yeah, I feel that there’s this responsibility because people are looking up to you, you always want to show the best that you could be, but I think it’s worth it if people feel like you’ve made a positive difference in their life.”

Understanding just how important and life-changing a scholarship can be, she is also working with a pre-university mentorship programme, Closing the Gap, to mentor students from disadvantaged backgrounds and offer assistance in applying for scholarships. “I think it is very important,” she underlines, “Because, you know, my life changed when I got that scholarship to go to Harvard and you can’t underestimate how transformative a good higher education will be for you because it opens so many doors. Closing the Gap runs these programmes that encourage students from disadvantaged backgrounds to survive, because they will be mentored for a period of up to two years, and get them to apply for a scholarship for local university – overseas, even, if that’s possible – but I think it’s very important that these bright children have that opportunity.”

Naturally, her progression in life sees her transitioning from a high-achieving student to a successful adult. A question she often hears, especially upon her appointment as one of the youngest CEOs in Malaysia, is if age hinders her career. She has, on occasion, truthfully spoken about the fact that she faces far more adversity from being young, rather than being a woman, in the work field. A few years down the line, it seems to remain the same, albeit it now being more advantageous for the young CEO who’s learned to navigate the hurdles.

“When you’re a CEO, the main thing is to have something that you want to build,” she asserts. “You don’t become a CEO just to run things, that’s just keeping the engine running, but as a CEO you need to have a vision about something that you want to build. So, I’m pretty excited with what we’re trying to do. I think that when we start talking about things, then they kind of forget about the age. But some people also recognise that diversity is important. Like with ICDM, when they offered me directorship, they were very deliberate about one thing: someone with a very different profile, because we bring a different kind of view. The rest of the directors are very, very established like Tan Sri Zarinah Anwar, Dato’ Seri Johan Raslan – and then there’s me and Joel Neoh, we’re there and we’re young and we have very, very different views sometimes. But I think that that’s really important because we’re part of the rising generation.

“I think it’s just having different viewpoints. The key thing for change to happen is to have some sort of, not to say conflict, but something needs to happen, there needs to be a clash and some sort of movement and then you come to a resolution and that resolution, if positive, should take you at least a step forward. I think that that part is really important, so even as a leader, you shouldn’t try and surround yourself with people who always think or work like you, because without that tension or dynamism, I don’t think there can be progress.”

As the CEO of a hospital, she finds herself facing a different kind challenge when the pandemic hit. She has to ensure that they are able to withstand it facility-wise, including allocating enough isolation wards and ensuring proper ventilation, and be attentive of staff welfare. Not only are free screenings offered, even to outsourced workers such as the housekeeping staff, but access to psychologists is also provided to conserve mental health. Additionally, financial planning is offered to those facing monetary difficulties brought on by the pandemic and a subsidised childcare centre was opened last year at Sunway Nexis – operational to this day – to accommodate staff with children. The latter is especially important considering that the hospital staff tend to be a very young, very female young workforce. That is, comprised of 79 per cent female who are 94 percent below 50 years of age.

“I think that Malaysia is ready for change,” she says when asked for her thoughts on the country’s future. “There’s been a lot of recent development where we see young people rising up to talk about things that are important to them. Undi 18 is just a start. We see the conversations now around suicide, death penalty, about equal citizenships for mothers. Those are the things that I really hope the next generation will be able to change in Malaysia. There’s a lot of growing pain naturally. Because when we decide who we want to become, there’s going to be a lot of difficult conversations but hopefully more rational and cool heads will prevail, and we will move towards a better version of ourselves as a country.”