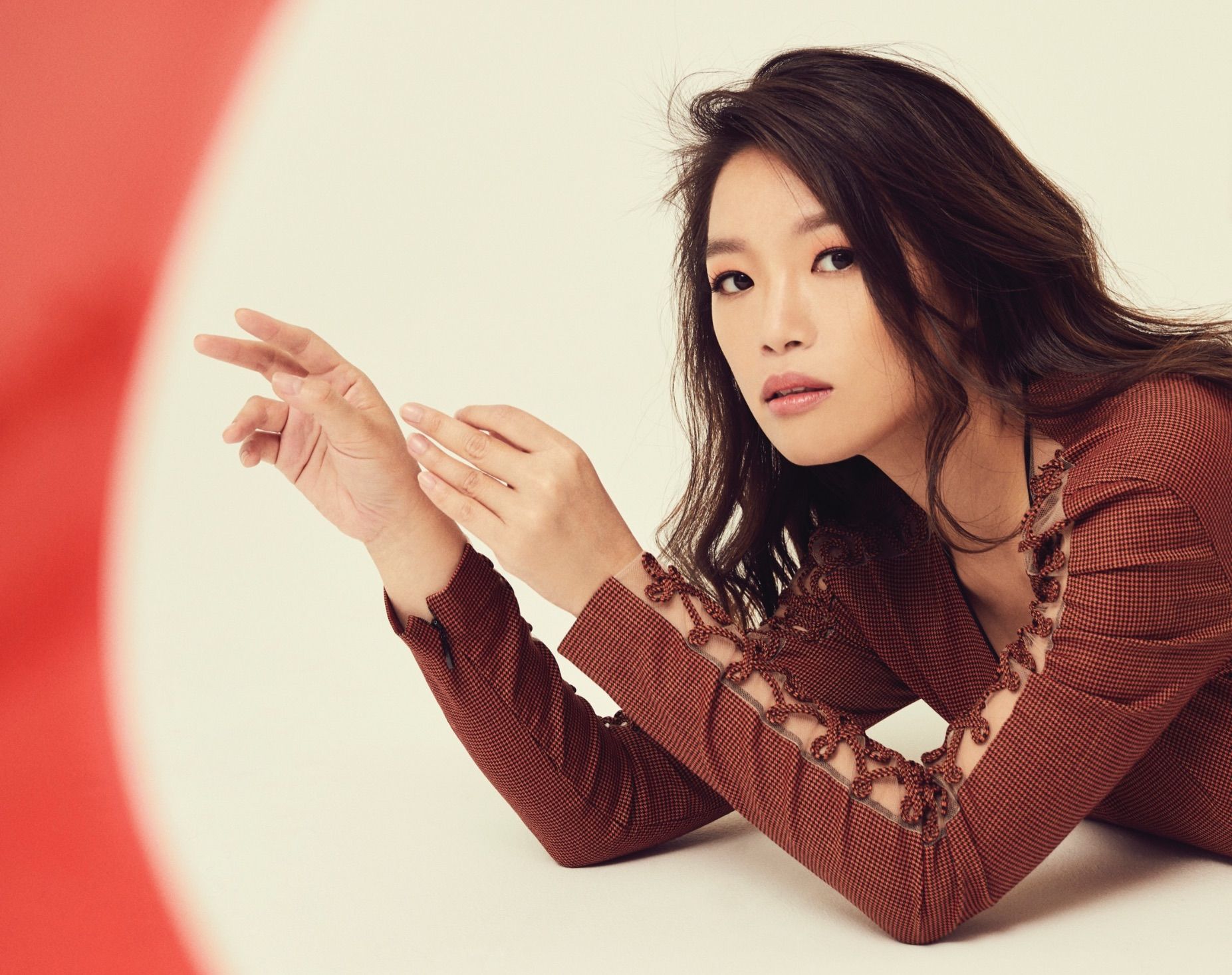 This story was first published in Prestige Malaysia July 2019 issue

Red Hong Yi is playing with fire. Literally. She is lying on her back, holding up a lighted candle while attempting to wipe soot and dripping wax off her face. The work is unglamorous yet Red is silently chuckling to herself, ruminating on how her followers have this perception that her work as an artist is always so easy. But that’s just social media for you. All her effort isn’t for nothing as Red is working on a commissioned piece by Google Singapore, specifically a 10m-long mural made of burnt bamboo weaves (which would have been revealed in June).

One week ago, Red was playing dress up at our cover shoot, trading in her black cotton dress and straw hat for a gold and red Versace brocade number. “I think my Sabahan side is slowly coming out,” she exclaims in amusement, eyeing the rack of wardrobe selection cautiously.

Slightly petite in frame, with a sunny disposition to boot, Red arrives on our set after stepping off a flight from Düsseldorf, Germany, where she was invited to speak in front of an audience of 500 at the ninth edition of the Beyond Tellerrand conference. It may be hard for anyone to imagine that underneath that effervescent persona, the professional architect turned artist whose art exploded on the Internet seven years ago was and still is rather conscious when it comes to speaking about her work. After all, if you take into account her 48,822 subscribers on Youtube and 179,900 followers on Instagram, that’s a colossal amount of eyeballs focused on one person who just confessed she is “actually quite shy”. I rebut her confession almost immediately. “But you just spoke in front of an entire conference in Germany,” I say to Red, baffled by this new discovery.

“I think it’s a common theme for artists to always have doubts about their work,” she offers candidly, as I prod her about her shyness claim. “Personally for me why my art career began was because I decided I cannot be shy about my work anymore and I have to show it despite my fears.”

How did she conquer that fear then? “What struck me is that you have to forge on and not be too mindful of the naysayers as you go on with what kick-started that passion. I tell myself that I cannot take it too personally and my work should not dictate my worth and my value,” she points out affirmatively.

While Red owes a large share of her art career’s initial success to social media (a video recording of her creating a portrait of retired NBA star Yao Ming using a basketball and red paint went viral overnight), she asserts that it can eventually turn into a double-edged sword. “Likes, shares and comments should not be the determining factor whether a project has succeeded or not. It can spark anxiety for sure,” she remarks. Red herself pleads guilty to falling under the social media trap during her nascent art career, psyching herself into believing that her next project had to reach a million views. When that did not happen to some of her projects, she thought she had failed. “I learned that wasn’t the case because that’s just social media and how you market your project.”

It’s been five years now since Red has given up her architect career to pursue art full-time. “I’ve always thought my path was quite straight, enrolling in foundation year to graduating architecture school,” she confesses, disclosing that she chose to study architecture because it was the middle ground for maths and art – two subjects that she took a liking to. Though her talent and exposure to art was evident from a young age, it wasn’t until she relocated to China in 2011 that she yearned to discover more about her roots, which in turn prompted her to dabble in art once again as she “wanted to express how I was feeling about living in China.”

With her porcelain complexion and almond- shaped eyes, Red’s distinctive oriental features are a manifestation of her rich cultural heritage. “My dad’s side of the family is from Shanghai. My mum’s side is from Guangxi,” says the Sabahan native whose father runs an engineering firm, while her mother was a banker.

What was it like growing up in Sabah? “I’ve often wondered what it was like growing up in Kuala Lumpur,” she responds with a laugh. “When I was a kid, I’d always wanted to enter competitions but the rules and regulations always stated that it would be held in KL or you had to mail your entry to KL so I felt like I wasn’t at the centre of it all. What I do appreciate about Sabah is I grew up catching bugs, climbing trees and fishing. My parents brought me on road trips so I got to appreciate the wildlife and outdoors.”

Between juggling numerous speaking engagements and commissioned projects around the world, Red has also contributed to her home state through Pillars of Sabah, a project she initiated and co-organised with her fellow Sabahan friends, designer Melissa Lo and local filmmaker Jared Abdul Rahman. The first instalment was unveiled to the public last Malaysia Day, uniting the local community together through art. “This particular site is located right smack in the middle of KK town and left abandoned since the ‘90s. It was a colonial building built prior to World War II and was burnt down,” Red elaborates, disclosing that they initially wanted to turn the entire site into bright yellow but the recent election results caught them by surprise. “We thought it would be nice to use the number 30 as a whole because there were 30 pillars and we wanted to dedicate each pillar to a local artist who will paint a face of a person who has inspired them.”

“Likes, shares and comments should not be the determining factor whether a project has succeeded or not”
Red Hong Yi

The success of the first Pillars of Sabah spurred a second instalment earlier this year in conjunction with Earth Hour to create environmental awareness. With the support of Sabah Art Gallery and Sabah Tourism Board, Pillars of Sabah returned to collaborate with WWF Malaysia and showcase the artworks of 30 new artists highlighting 30 different endangered wildlife. The project has also brought upon new exposure to the local artists who participated as they received numerous requests for commissioned artworks and some even went on to pursue art full-time.

“What I’ve learnt from this project is most artists including myself do not necessary know how to market our work. As artists, it is such a personal thing for us and there is always criticism when you put your work out there. You are bound to receive a fair share of compliments and criticisms but to be able to take that in and forge on is a big thing. I’m hoping that through this project the artists will learn to show their work and be proud of it,” Red remarks, citing that Sabahan artists first need to overcome their shyness.

On her career front, this will also be the year for Red to steer her art career back to where it all began as she strives to find new meaning within her work. “When I first started out, I did a lot of projects to express how I was feeling about living in China and getting to know my roots. I’ve since started working with brands and clients but at the same time, I feel that when I express myself and when projects come from a personal place, that is when I really push my art skills and quality of my work. I’ve been trying to strike a balance between both,” she confesses openly.

While there is plenty to look forward to this year as Red is in the midst of completing commissioned projects by Google Singapore and STAR Walk of Fame, KLCC, she is also excited to share more about her eggshell series project which she has aptly named Future Relics. The series comprises 15 pieces of artworks featuring traditional Chinese vases depicted through cracked eggshells laid on painted timber panels. “The idea came about when I thought to myself, in a 100 years’ time when humanity looks back on history, what are they going to think about the people living during our time? I wanted to talk about what it is like living in our time and this series addresses the various issues that an Asian woman is facing in today’s world,” Red elaborates further, citing that the issues include current politics, social issues and popular culture that have played a role in shaping her identity as an (Southeast) Asian female in the 21st century. Among the more interesting issues she will address in this current series include the LGBT rights movement, breast cancer and body image and the conundrum of a married woman on sacrificing her career for family. Red has also dedicated one artwork to the #MeToo movement which has gained traction over the year, incorporating symbolisms of two rabbits and a rice bowl inside the vase. “In China, the #MeToo hashtag is censored so to get around that, women in China have resorted to using emojis of bunny heads and rice bowl to expose sexual harassment,” Red elaborates, pointing out that that the term rice bunny is pronounced as “mi tu” in Chinese.

I ask Red if she has ever personally encountered a similar experience given her exposure in the art world but she responds with a no. “As I was working on this project, I was reflecting on my career and my assistants asked me the same question. My clients and collectors have been really respectful but I think society may be the cause behind what hinders women and it may even come from within ourselves. Male artists are featured more pre-dominantly compared to female artists because family becomes an issue for women so they tend to hold themselves back. That makes me wonder, in today’s society, what would a healthy partnership look like?”

Immersing herself in her art for the past five years, the artist has now taken on a different path, with the intention to create more than just beautiful artwork. “I want my artwork to have more of a meaning instead of creating something that is just aesthetically pleasing. I want people to relate and interpret the pieces by themselves as some of them are quite abstract. I want my pieces to tap into my heritage of being a Chinese and be inspired by my culture and my roots,” she says earnestly.

As part of her quest to find greater meaning within her work, Red dived deep into her past and discovered that her granduncle was a talented artist who served during the communist revolution. He was hired to be an artist to create propaganda posters for the revolution. “I saw his artwork and told him that I wanted to learn from him but he refused to paint anymore as it brought back scarred memories. The notion that he was going to throw his paintbrushes away came to me and I thought hard about it before deciding that I will use other materials to express my work instead of the conventional way of painting. That made me want to express things like culture, family and history through my art,” she sums up deftly.