Cover story: The Goh brothers discuss the past, present and future of MACROKIOSK

People & Events
Cover story: The Goh brothers discuss the past, present and future of MACROKIOSK
Share
Next article

From climbing trees as little kids, to climbing the ladder of success as young men, the Goh brothers have always done things as a trio. It was only recently – on the 3rd of July, specifically – that MACROKIOSK, the company they founded together in the year 2000, celebrated its 22nd anniversary.

“It was funny because it was a general meeting, a serious meeting, but we were just three kids,” recounts Mr. CS Goh of the moment they decided to turn their love for technology into something more serious and profitable. Armed with coloured pencils, crayons and an exercise book from school, the brothers huddled together in their shared bedroom to come up with a game plan for their future company. From just three youngsters in a small room in Malaysia, MACROKIOSK has now grown into a team that’s 250 strong with an established presence in 12 countries across Asia.

Dato’ Kenny Goh, the oldest of the three brothers, serves as the Chief Executive Officer of MACROKIOSK, while Dato’ Henry Goh and the aforementioned CS take on the roles of Chief Operating Officer and Chief Corporate Officer, respectively. With an age gap of merely three years between Kenny and Henry, and another three between Henry and CS, the brothers are unsurprisingly close to each other. If it weren’t for their close-knit relationship, MACROKIOSK probably wouldn’t be in existence today.

It all began in a corner lot house in Subang Jaya, with a fairly large garden dotted with trees of all kinds. Mango, papaya, fern leaf, durian – the “orchard”, as the brothers call it, had it all. It was here that they spent most of their time playing together, be it football, badminton or just climbing the many trees. As they grew older, they began to develop an interest in technology. To be precise, as Henry puts it: “We were quite fascinated with computers.” He explains that they initially started doing things like repairing computers and giving informal tuition on how to use computers as a way to earn some pocket money. This eventually progressed into building the enterprise solutions platform company that they own today once they decided to take it more seriously. Naturally, they decided to do it as a trio.

“Our dad was a master distributor for one of the mobile phones at the time. I think we found this quite fascinating and we started to draw up our company’s direction based on something related to mobile devices,” shares Henry, adding, “Our parents were very supportive. We actually asked dad to give us some money to start off things and he gave us some, so he was kind of our first investor. So, that was very, very good encouragement.”

The brothers emphasise how important their parents’ support had been, with Kenny explaining that what they were doing would’ve been considered “taboo” at the time, but their parents still fully supported them. Since Kenny was the first to reach the eligible age for starting a business, his name was used to register their company following his graduation from tertiary education. “It was something that turned from inquisitive to satisfaction,” Kenny describes their early venture into the business. “What I mean by satisfaction is people began paying us for our solution. It’s the biggest pat on the shoulder, knowing that you’ve created something good that people like and are willing to pay for. So, we just put the pedal to the metal and now we are already 22 years in business.”

Having garnered plenty of success in their more than two decades in business, including acquiring 100% ownership of the company in June 2020, it piqued our curiosity about what more they plan to achieve come its 30th anniversary. We put the question forward, to which Henry replies, “Whether it’s the 22nd anniversary, or the 30th, I think there’s no end point, per se. I think it’s consistently trying to achieve something that makes us have the hope and faith to drive the company further.”

CS remarks, “Moving forward, we’re going for global domination. But ultimately, what we really want to build, as founders, is a company that’s responsible, sustainable and more importantly, able to add value to society.” He adds that their employees are part of what motivates them; it gives them a sense of satisfaction seeing their employees grow along with the company and achieve milestones of their own, such as buying their first car, getting married, having kids and so on. It was a proud achievement for MACROKIOSK as well to not have had to lay off any employees during the pandemic. It is evident that they care for their staff as much as they do for each other.

Another question that has the brothers mulling over in contemplative silence is their personal goal outside of their company. CS responds, “I would love to set up a corporate foundation. It’s going to be called the Cheese Foundation. Firstly, it stands for my name. My Chinese name is Chee Seng, which can be shortened to Cheese. Secondly, cheese is all about thinking out of the box. If you look at it, cheese is always used to bait the mouse, but more often than not, the mouse always grabs the cheese without getting trapped. My two main philanthropic objectives of this foundation are, firstly, to help underprivileged youths who want to be entrepreneurs, and secondly, to create a cleaner and better environment.”

As for Henry, he answers, “It’s very hard to think of something outside of MACROKIOSK for now, because I think it has been kind of like so intertwined with our lives. But I think what I can say is that MACROKIOSK does give me a very good platform to do what I want to achieve personally. Like, maybe some of the Corporate Social Responsibility (CSR) work that we’re doing, we can ride the MACROKIOSK platform to do it. I would like to say that whatever I want to achieve, I want to bring MACROKIOSK along.”

Kenny echoes his brother’s sentiment, “No matter what we do, the three of us will involve each other, and now we involve MACROKIOSK, too. Whatever we plan, we want MACROKIOSK to be there – it’s like the fourth brother or a sister of ours. Sometimes we refer to MACROKIOSK as ‘he’, figuratively speaking. Aside from the CSR that we’re working on, we are also currently sponsoring our national schools through an entrepreneurial programme. We try to give back to the community. Perhaps, one step at a time, not the world yet but our immediate community. Like, now we’re in Malaysia, we want to do something in Malaysia first within our capability.” 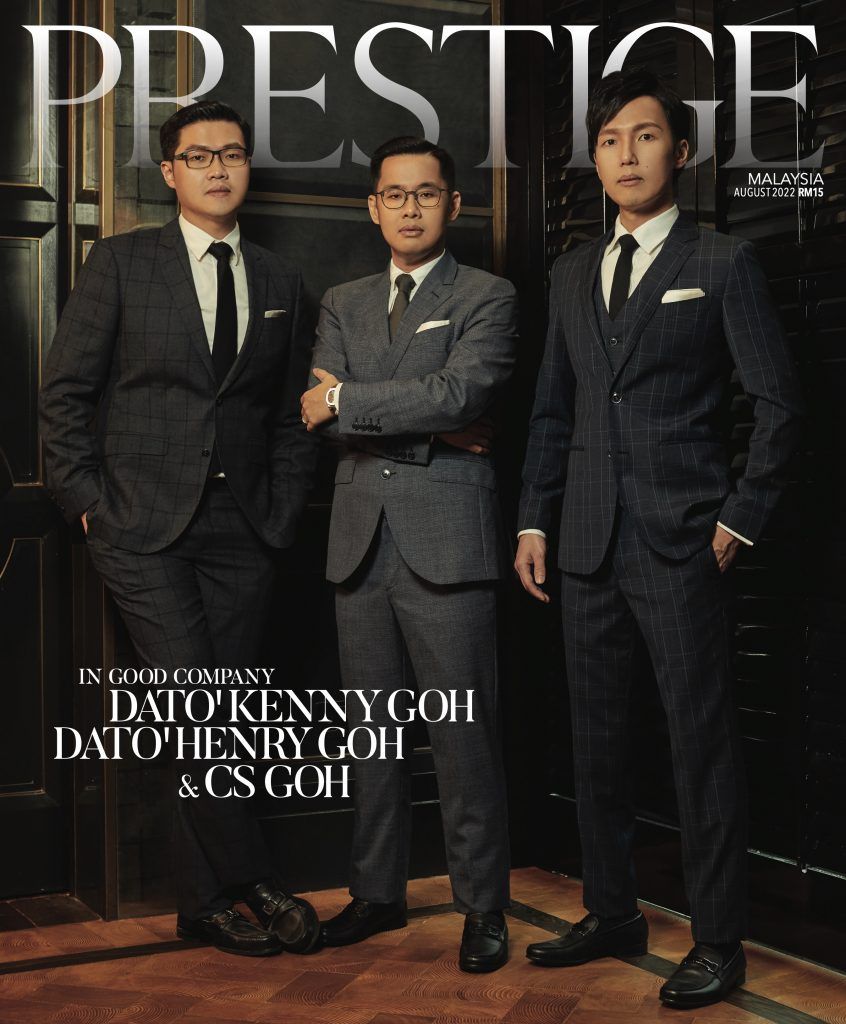 This cover story first appeared in Prestige Malaysia’s August 2022 issue. To read the full story, pick up a copy in store or subscribe on Magzter.