With her graceful stride and calm demeanour, Datin Sri Joanne Yew is a picture of ethereal elegance as she enters the set, ready for her cover shoot. More than a decade-long experience working in front of the camera lends her the expertise to pull off various poses with minimal effort.

Poised yet powerful, it is easy to see why she earned the Miss Astro Chinese International title that propelled her to fame all those years ago. After a carousel of outfits and accessories, the shoot is over and she slips back into her little black dress and heels. We venture into the dressing room, where she welcomes us with her soft voice and warm smile.

Once comfortably seated, she begins recounting her career and life. “My childhood was normal,” Joanne says, describing herself as a quiet and shy child. Despite that, she did find that she was often picked for stage performances. It had been so since her kindergarten days, after she and her family moved from Penang to Kuala Lumpur. “I was so shy, I used to hide when my mother tried to take pictures of me while I was performing,” she admits with a chuckle.

The shyness continued throughout her young life, but did not hinder her from participating in (and winning!) various compulsory activities during her primary school years. She remembers excelling in sports, drawing, singing and even as a prefect. It was only in her high school years, during which she continued her Chinese school education except for the four years that she was enrolled in a private school, that she began to come out of her shell. In fact, she was starting to be more rebellious – or “moderately” rebellious, as she laughingly describes it.

She attributes this to her Second Child Syndrome, how she was feeling neglected despite her parents giving her the exact same amount of love and attention as they did her older brother and younger brother. “I wasn’t neglected but I somehow thought I was,” she ponders. Nevertheless, this fostered independence in the then-teenage Joanne, who went on to be crowned Prom Queen at her high school graduation.

One might think this was what prompted her to compete in beauty pageants a few years down the road, but she admits that the thought had never occurred to her. If it weren’t for her mother’s prompting, not for the sake of winning but more to coax her out of her quiet and introverted persona, she would’ve never entered the competition that changed her life. “I didn’t have class on that day. My mum called me and asked if I wanted to join,” she recalls, stating that she was a college student at the time. “I was one of the last few candidates and I managed to pass through to the semi-final and final rounds.”

19 going on 20 at the time, Joanne won the Miss Astro Chinese International 2007 crown and went on to compete in the Miss Chinese international Pageant 2008 in Foshan, China. “Then I started to work in this industry. I worked in places like Hong Kong, Singapore, and Indonesia, while still based in Kuala Lumpur,” she shares. She later pursued higher education in Korea, staying in the country for two years before graduating with a marketing degree from a university in Seoul, hence her ability to speak Korean.

It was her casting as the lead role Ah Bee in the 2014 Chiu Keng Guan-helmed “The Journey”, a Malaysian Chinese-language film that set many records including becoming the highest-grossing local movie at the time, that opened more doors for her. “That’s when people started to know me more,” she says. She followed it up with a role in “ATM”, a movie screened only in Hong Kong with her as the sole Malaysian Chinese in the cast. Despite receiving more acting offers afterwards, she decided to decline them. She admits that she has an all-or-nothing approach when it comes to work. If it is something she is uncomfortable doing and isn’t able to pour 100% effort into, she will not accept it. “I am still in the entertainment industry, it’s just that I’m more selective now,” she clarifies, adding that her current focus is more on brand engagement, as evidenced by her Instagram posts, and her F&B business.

She began her foray into the F&B industry with the opening of her Yakiniku Great restaurant at Bukit Damansara in 2021, marking the first restaurant of the franchise from Utsunomiya, Japan to open in Malaysia. “We are going to open a second store in Kuala Lumpur, before expanding to other countries in Southeast Asia,” she reveals her plans for the franchise, additionally stating that she is planning to bring more good restaurants into Malaysia.

“Simplicity is the ultimate sophistication.” Citing her favourite quote by Leonardo da Vinci, Joanne believes in living simply and keeping a minimal appearance. This is evidenced by her choice of “clean, elegant and simple” style, which she keeps interesting with “a touch of wow factor”, such as more colourful accessories and nails that contrast beautifully with her more subdued outfits. “My clothes are all very simple; black, white, grey. I do wear different colours but only when I go to events. People would change their style according to different age stages. When I was younger, I liked a different style. Now I want something that I feel more comfortable in.”

“Of course, in life you will have challenges, ups and downs. This is a fact, no matter if you’re rich or poor. Everyone has challenges. That’s how we are in this world. This is how we improve ourselves every day. When a challenge presents itself, how you react to it, how you solve the problem, these train your mind and yourself to become better.” 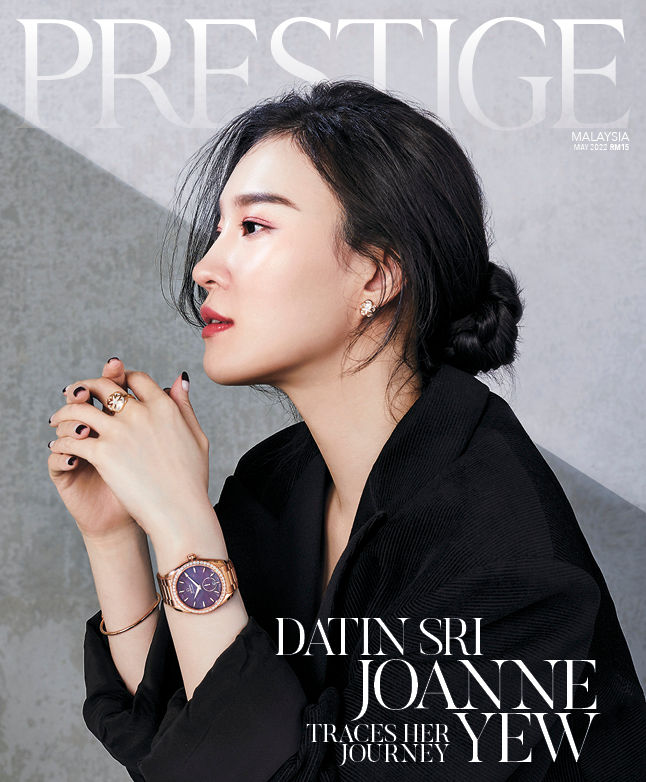 This cover story first appeared in Prestige Malaysia’s May 2022 issue. To read the latest issue, pick up a copy in store or subscribe on Magzter.