In conjunction with Father’s Day, Prestige Malaysia talks to two outstanding fathers mentoring their sons as they follow in their footsteps.

When Alex Yoong was a boy of three years of age, he knew that his heart belonged to the racetrack. “That’s all I ever wanted to do,” the three-time Audi R8 LMS Cup champion winner shares. Little did he expect he would one day have a son eager to follow in his footsteps. Yet, 18-year-old Alister Yoong is a thoughtful young man who looks up to his father as a professional mentor, best friend, and confidante.

Initially, Alister’s interest in pursuing a career in motorsport set Alex on edge. “I wanted him to find his own path,” Alex reveals, having no desire for his son’s career path to be an extension of his own. But the feelings of conflict subsided quickly. “When he started driving, I enjoyed it. It meant I had to stay in the sport. When you have been in a sport your whole life, it can get tedious and boring – but not when your son is doing it,” the former Formula One driver explains.

The father and son team also work together in the family business. Axle Sports is a progressive e-sports company nurturing young talents in a steadily growing virtual motorsports industry. “Online racing is the future,” Alex asserts, having founded the company in 2008. Especially during the pandemic when global motor racing has ground to a halt, the digital business has been busier than ever, continuing to provide training and hosting simulated racing competitions.

Although the racing side of the e-sports scene is very niche, Alex Yoong has high hopes for the sunrise industry. “Because simulated racing is cheaper, it is much more accessible to everyone,” the founder of Axle Sports explains. “What’s interesting with the sim world is there are all these people who have never seen a real racetrack or been in a real race car, but their passion is off the charts. In some cases, it is far bigger than with regular motorsports guys. It’s nice to be a part of that.”

“I tend to not talk to him about more profound life subjects because that is important. He needs to figure that out for himself”
Alex Yoong

Alister shares his father’s enthusiasm. “Ever since Axle went up, it’s been non-stop,” the youth enthuses. He also admits that although he shares other sporting interests with his father, like football and basketball, their passion always leads them back to the tracks. “When I think about the advice my father has given me, what always comes to mind first is tricks on the track or knowledge of that nature,” the teenager admits, often meditating on improving as a driver.

As a mentor, Alex is generous in offering advice, guidance, and instruction to help cultivate his son’s abilities. But as a parent, he adopts a different stance. “My style of parenting has been very much to try and show rather than instruct,” Alex explains. The professional driver does not believe in consciously imposing his own values and beliefs on his son, tentatively limiting life advice in place of driving tips.

“The reason why I’m happy to give my son tips in motor racing is that it’s just a sport, a game at the end of the day. So, if we ever fell out over it, it would trouble me, but it is not important,” Alex elaborates. “I tend to not talk to him about more profound life subjects because that is important. He needs to figure that out for himself,” the considerate father explains. “In life, you can wind up in difficult situations very quickly. I would like to have a certain parental currency with him so that one day if I tell him he needs to listen to me, I know that he will take the advice to heart.”

Alister appreciates the room his father has given him to grow, believing it has shaped him into a mature, independent, and critical thinker. “I think we have a very healthy relationship. It is a mutual dynamic, and we can communicate on the same level. Other parents may sometimes elevate themselves over their kids, but not him.”

“He has always supported me,” Alister says, acknowledging that driving is an expensive sport that requires commitment. “He shows me a level of respect where if I demonstrate an interest and show I’m going to stick with it, he jumps in 100%.”

As any parent and child, Alister describes their relationship as ever-changing, defined by ups and downs. Regardless, his admiration and love for his father runs deep. “He has given me the freedom to pursue my ambitions, make my own decisions, and to become my own person, rather than what he wants. He only wants me to be me,” the youth describes.

Alex’s hopes as a parent are simple, and a sentiment undoubtedly shared by many fathers. “I want my son to know that our relationship is important to me. All I want for him is to know that he will grow into a man that can handle himself because life is full of twists and turns.”

Dato’ Simon Foong is a man of many hats. A warm soul, he is a dedicated family man and a visionary entrepreneur with an unquenchable thirst for new and exciting developments across the board. His ventures include The Body Shop, Aquaria KLCC, The Rift: Malaysia’s largest VR/AR theme park, and the eco-luxurious Angsana Teluk Bahang Penang beachfront resort with a lifestyle and wellness centre scheduled to open in the third quarter of 2021, barring obstacles. His sons, Daryl and Dexter Foong share in their father’s incredible zest for life and diligently contribute to the success of the family businesses.

An early adopter of various technology, Simon once had a hand in bringing Apple computers to Malaysia in the 1980s. Consequently, his sons benefitted from an early introduction to computers before the technological boom. “Dad brought back one of the first computers in the days where you still had to start up games using MS-DOS. We would hook up three computers and play Age of Empires over a shared network,” Daryl recalls fondly. “When I started losing to the kids, I couldn’t believe it!” Simon admits with a laugh, admitting it was then he knew his boys had grown up. 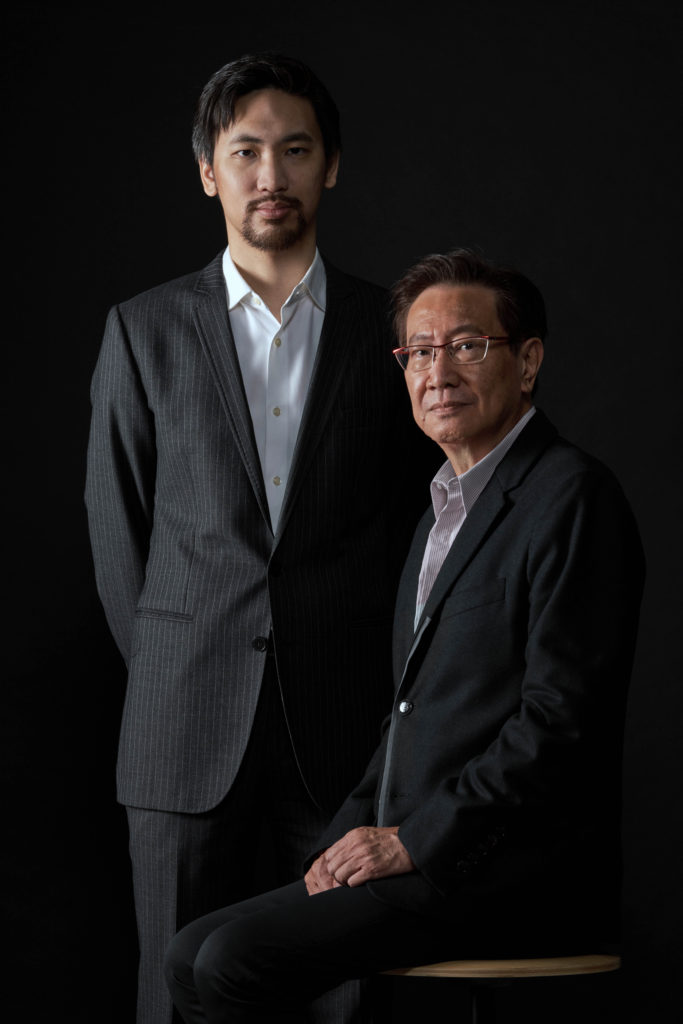 Eldest son Daryl is a true animal lover, pursuing his passion for environmentalism as the executive director of Aquaria KLCC. Although father and son enjoy a close relationship, Daryl acknowledges that he marches to the beat of a different drum. “My dad is a consummate consumer, and that is what drives his assorted pursuits. I tend to pay attention to the latest developments in my areas of interests, like diving, conservationism and computer gaming.”

“If you want to make sure your children grow into the people that you would want them to be, you must first be that person, emulating the same tenets”
Dato’ Simon Foong

Regardless, the pair agree that they learn from each other and find working with family is a rewarding experience. “Even though our approaches may differ, we know that we are motivated by the same ideals shared as a family,” Daryl says. “Moving forward to protect nature, green life and the ocean – that is ingrained in us.”

Simon credits his wife, Datin Mina Cheah, for her significant role in shaping these values. “My wife Mina first introduced me to the concept of ecological awareness. I like the idea that you can help the world without money-driven focus, and success still comes with good principles. That encouraged me to explore more conservation efforts we could engage in,” the managing director of Aquaria KLCC explains. As a father, Simon strongly believes his responsibility is to lead by example. “If you want to make sure your children grow into the people that you would want them to be, you must first be that person, emulating the same tenets.”

“For us, it is about corporate activism rather than corporate social responsibility. We are going out of the way to do something that may not necessarily generate any form of income but is the right thing to do,” Daryl adds. He is thankful for every effort to preserve the natural world for the next generation. “What my parents did for me,I am now doing for my kids.I hope I will be able to take them to see elephants in the wild someday or go diving together to visit the same coral reefs I have,” the young father admits.

Beyond business, Daryl is grateful to his father for raising him to follow his heart and be true to himself. He is honest in his admiration of his father. “My dad has this incredibly gregarious nature and can get along with anybody. He can gel with most crowds, and he is very knowledgeable – you can share a conversation with him about almost anything,” the proud son explains. “He also has an incredible capacity to forgive. In a business setting, I think that is a trait that is very hard to come across and even harder to learn. It is not something you can fake.”

Signup to our weekly newsletter for latest news and interviews!