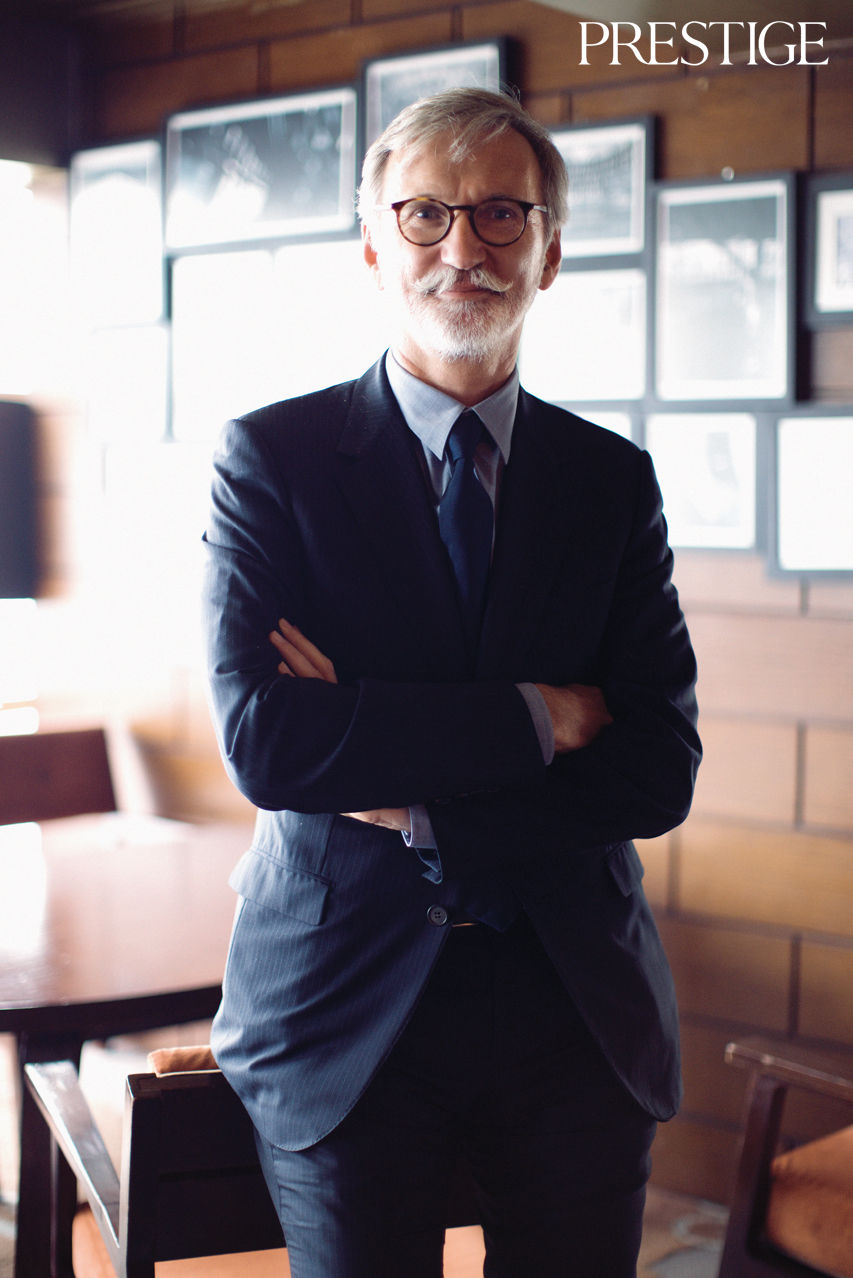 It has often been stated that family businesses tend to go into decline after three generations. But Jean Cassegrain, CEO of Longchamp, says he has no such fears for his 71-year-old Paris-based company, which boasts Kendall Jenner as its latest ambassador. Indeed, he is looking forward to the time when his children, and those of his siblings, grow up to join Longchamp and lead it to further glory as one of France’s most treasured luxury brands.

“I have three children, my sister (Sophie Delafontaine, Creative Director) also has three, and my brother (Olivier, the New York City-based leader of the brand’s development of American boutiques) has one,” Cassegrain said during an exclusive interview at Altitude The Plaza in Jakarta. “We hope they will continue running the business long after my siblings and I have retired.

Cassegrain laughed when asked about the health of his father Philippe, the 82-year-old President of Longchamp. “He just called me about some problem at head office (on rue Saint-Honoré),” he said. “My dad still comes to work every day, still advises us on how to move the company forward. He’s so active and energetic, I sometimes joke that I’ll retire before he does!”

For Philippe Cassegrain, the House of Longchamp is more than a company, it’s a family adventure. Born in 1937, he was 11 years old when his father (Jean Cassegrain) founded Longchamp in 1948. At age 16, Philippe boarded a Union-Castle liner to Africa. The following year, in 1954, when he turned 17, Philippe travelled to Hong Kong for the first time. After his African and Asian travels, a trip to North America followed. Over three consecutive years, Philippe travelled there regularly and laid the house’s foundations.

In 1971, Longchamp launched its first nylon bag. The Xtra-bag was considered revolutionary and would serve as the precursor to Le Pliage, which subsequently became an icon, easily recognisable everywhere. As Business of Fashion put it: “Vuitton has the Neverfull. Michael Kors has the Jet Set Travel. And Longchamp has Le Pliage. Longchamp’s signature nylon folded tote is ubiquitous – the French brand reportedly sells 11 of its Le Pliage designs every minute.”

Over lunch, Jean Cassegrain talked happily of the origami-inspired Pliage’s long-running success. But his face betrayed a different emotion when the conversation turned to the shocking events of one awful weekend last March on the Champs-Elysees. That was when brutal “yellow vest” rioters looted and torched a bank, a couple of restaurants (one of them Fouquet’s brasserie) and several shops on the famous avenue, including the 500 sq m, two-floor flagship store Longchamp opened at No. 77 in 2014.

“They took straw chairs out of Fouquet’s and threw them into our shop to add to the blaze,” said Cassegrain. “They grabbed all the bags they could find in the store – all of which had been hand-made by our French artisans – and threw them on the pavement, doused them with paraffin and set fire to them. It was as cold and mean as that, and what good did it do anyone?”

By the time Cassegrain met up with Prestige, the Longchamp flagship had been repaired and reopened. But he said he and his family and 3,000 employees had still not quite got over the shock of the attack on the store they love. Perhaps they never will.
“The financial cost of the damage was immense, but that’s not what hurt most,” Cassegrain said. “The attack was an emotional moment. It was heartbreaking, and it affected our morale for a while. It’s worrying to operate a company in a context that’s unstable. We would like to see less division among the French people.”

“Everything Kendall does gets a lot of attention. Elements of her personality reflect what the brand is all about. We like her energy. She’s a very determined young woman. “
Jean Cassegrain, CEO of Longchamp

Emotion. It’s not a word that luxury industry analysts use very much when discussing the fortunes of powerful brands. But this is a special case. At a time when most upscale brands have been snapped up by conglomerates like LVMH and Kering and become little more than names in ever-expanding portfolios, Longchamp remains staunchly independent – one of the last remaining family-owned leather goods manufacturers in France. The company does not release financial information. However, Deloitte has estimated that Longchamp netted US$612 million in sales in the year ending June 2017.

For Jean Cassegrain, Longchamp is a way of life. Some of his earliest memories are centred on the business founded by his grandfather in 1948. He recalled visits to the Longchamp workshops in western France and his grandmother’s store on the Champs-Elysées, family discussions of new ideas and prototypes, and, later, trips with his father to exhibitions and trade fairs around the world.

He said he never considered doing anything other than becoming an active member of the family firm. Before doing so, however, he acquired a solid grounding in business. He is a graduate of the prestigious Ecole Supérieure de Commerce in Paris and, as part of his national service, spent a year at the French Trade Commission in New York, where he assisted French companies aiming to establish a foothold in the United States. He supplemented this with a two-and-a-half-year career in management consultancy before joining Longchamp. Cassegrain was made a Knight of the National Order l de la Légion d’Honneur in January 2012.

Cassegrain and some his colleagues, including Francois-Xavier Severin, the Hong Kong-based General Manager for Asia Pacific, visited Jakarta for a celebration of the reopening of Longchamp’s Plaza Indonesia boutique. In the revamped store, the collections are presented in a contemporary setting spanning over 150 sq m. Warm colours exude a spirit of modernity and femininity.

The boutique takes inspiration from the store on rue Saint-Honoré and is in keeping with its contrasting wood, leather, fabric, while playing with rich textured patterns. The beauty of the chosen materials and the attention to detail attest to Longchamp’s tradition of leather craftsmanship and artisanal expertise. A new animated table and unique designer elements in the seating area enrich the fashion and lifestyle statement.

The Plaza Indonesia boutique offers Longchamp’s latest women’s handbags and accessories, including the exclusive launch of ready-to-wear and shoes for the first time in Indonesia. A personalisation station gives customers the opportunity to differentiate their products by making them unique with their own initials.

Longchamp, Cassegrain said, sets out to project an image of contemporary French luxury. It’s continually reinventing its product offer, as exemplified by the new Amazone line. This is a signature of the craftsmanship produced in the house’s workshops, and a tribute to the fierce modern women of the 21st century, such as Ms. Jenner, who joined up with the brand in April last year.

Kendall Jenner Is the New Face of Longchamp
Style

“The reality TV star Kendall Jenner has quickly earned a prime position in the world of fashion and modelling,” Fashion Network reported. “She has even become the most popular model on social media with no fewer than 145 million followers on Instagram, Twitter and Facebook. Suffice to say that brands and designers are falling over each other to make the young model their new muse. But it was to Longchamp that the model turned in 2018, becoming its global brand ambassador.”

Cassegrain admitted that he would have liked to have a chic French woman as Longchamp’s new face, “but as a medium-sized brand, we needed someone who would make us more visible in the marketplace. We needed a loudspeaker for the brand to carry our message.

“Everything Kendall does gets a lot of attention. Elements of her personality reflect what the brand is all about. We like her energy. She’s a very determined young woman. Reaching this level of international celebrity at such a young age (Kendall is 23 years old) is impressive. She manages her career very well. She reaches a young audience on social media, and that’s vital for us. We have to bring in new customers to make sure that we have a future.”

Cassegrain marvels that Longchamp is successful at selling its products in China via WeChat, a multi-purpose messaging, social media and mobile payment app. “E-commerce is becoming more important for us all the time. We need to be able to adapt to a changing world, and to be where the customers are. We don’t want to choose between offline or online distribution. We must do both. It’s not up to us to decide which one wins. It’s our customers who will decide.”