Vernon Tan and the queen of vending machines 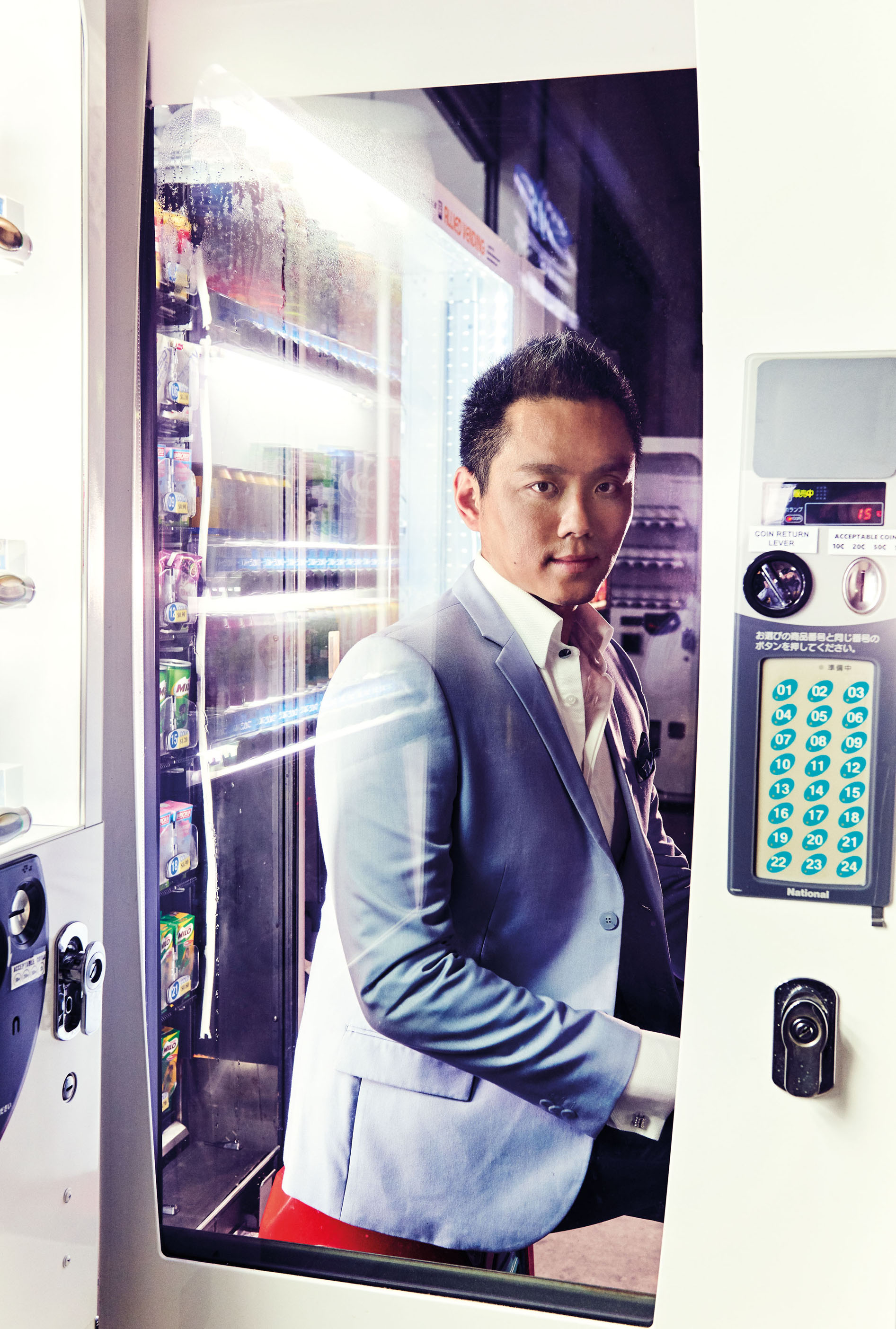 To celebrate the revival of an It watch of the eighties, Panthère de Cartier, Singapore’s Infinite Studios was transformed into a nightclub, with glamorous guests moving to the sonic, neon-lit atmosphere of vocalist Emma Hewitt and electronic music group DJ Dash Berlin.

In a dark lounge barely illuminated by a neon red sign, a crowd quickly filled the room to survey its gold-armoured vending machine. Stocked with mini bottles of Cartier-labelled champagne, it wasn’t your run-of-the-mill vessel of refreshments. Vending machines, after all, typically draw images of sugared drinks and salty snacks — quick, convenient, and dirt-cheap. This one, in contrast, was the queen of vending machines, dispensing posh bubbly from its glistening visage. Unlike other machines, which sends its product to the bottom, each bottle descended precariously from an elevator function to the sound of fancy whirs. A liveried waiter stood by to assist, as the line to the machine lengthened.

Working the configuration to accommodate the fragile glass bottles was a challenge for Vernon Tan of Allied Vending, who supplied the champagne vending machine.

“We had to figure out the best machine to dispense the champagne so no breakages would incur. Multiple trials and tests were done before we even started on the machine’s aesthetics,” says Tan, whose team settled on an elevator arm and a conveyor belt to lower the champagne.

Previously operating under the name DIY Vending until its management changeover, Allied Vending is into its second year. You might not want to describe this 37-year-old as a new player, however. His father and uncle previously co-owned Multi Vending in the 1990s before selling the company in the 2000s. Tan’s uncle remained in the industry and set up DIY Vending.

“In 2016, my uncle sought us out to help him take the business to the next level, and we agreed,” shares Tan, who re-branded the business as Allied Vending. “Vending machines automate laborious tasks for food and beverages, and even general retail.”

Expanding the vending dream
As an independent operator, Allied Vending is not tied to any food or drink manufacturer, so its machines carry an assortment of brands. The company also customises vending solutions to suit special requests, including an upcoming collaboration with Pet Lovers Centre, for vending machines that dispense pet food and supplies. Vernon Tan is optimistic about the prospect, adding the venture will pave way for other retailers to try vending machines in place of expensive brick-and-mortar shops.

For now, the company only dispenses perishables, a vending machine staple, but the vision for the future is broad. Besides ready-made food, which the company is planning to roll out in their vending machines, Allied Vending has been looking beyond edible supplies.

“We have been talking to retailers such as florists and even prayer supplies such as incense and joss paper. There has been interest from different kinds of non-food retail, including cosmetics,” he says.

Inspiration struck when Vernon Tan attended two vending shows in Guangzhou and Shanghai last year. “I felt like a kid in a candy store. There were machines dispensing all kinds of things, from fresh coconuts with a drilled hole and a straw, to pizza machines that showed the entire process from creating fresh dough to being fired up in the oven. The possibilities were endless!”

“The key is still economics,” Tan admits. “Generally, we look at how fast the products move, but we are flexible and can work with our customers in a variety of ways, whether it is supplying them with the machines, renting them the machines, or collaborating with them for the long term.”

He is less forthcoming when it comes to the most profitable locations for his vending machines, though. Vernon Tan says with a laugh, “It’s a trade secret! These are usually locations with many people who require something quick and convenient.”

Success to me is…making enough money to support my family but having fun while at it.

One thing most people don’t know about me is…I wear toe socks. They are so comfy but it freaks others out except my wife, who loves them too!

The person I admire most is…Warren Buffett. Despite his wealth, he lives modestly and remains sharp even in old age.

For this year, I…want to be a great father and a supportive husband. And a good boss.