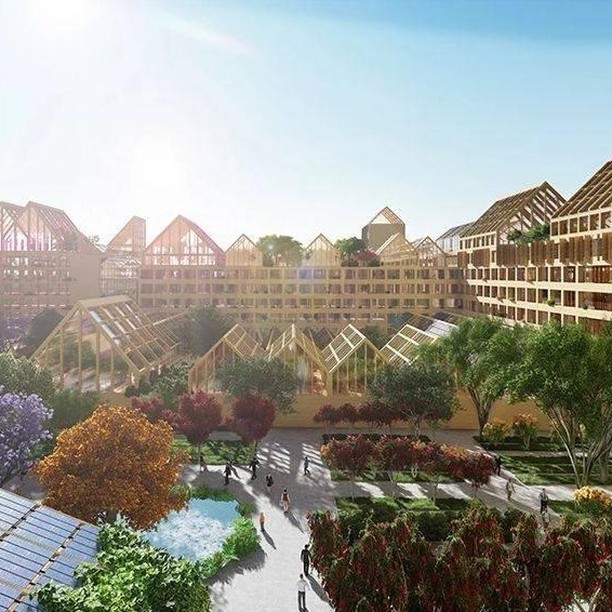 Greenhouses to grow vegetables, drones to take charge of deliveries, 3D printers to produce everyday objects… These are just some of the elements in the design for an urban housing development that has been christened Self-Sufficient City.

The project by a Spanish architectural practice, which has drawn much of its inspiration from restrictions imposed in many parts of the world earlier this year to deal with the pandemic, would have no fear of another lockdown. Remember not being able to go to work and struggling to overcome a fear of human contact when shopping for groceries, or simply refusing to leave home and living off pasta and canned food while missing the flavour of fresh fruit and vegetables? The lockdown reminded us of important aspects of our daily existence, and how much they contribute to the joy of living. With this as a starting point, a firm of Spanish architects has created plans for an urban environment, which would be much better equipped to withstand the impact of another lockdown than the cities of today.

With their proposal, the Guallart Architects practice won a design competition to create an extensive mixed-use development in Xiong’an New Area in the province of Hubei in China, where close to half a million people were forced to endure a second lockdown in June of this year in the wake of a resurgence of the coronavirus.With self-sufficiency integrated on the level imagined by Guallart Architects, the threat of future pandemics would be far less terrifying than it is for most of us today.

In concrete terms, this involves the construction of greenhouses equipped with LED grow lights and hydroponic systems for fruit and vegetable production on top of most urban buildings. Initiatives like these are currently gaining recognition for their clever use of space as well as their optimal conservation of water. At the same time, space should be set aside for more traditional cultivation methods, which the Spanish architects have emphasized by including dedicated gardens for aromatic herbs.

Nature is not only valued as a food source, but is also at the heart of many other aspects of Guallart’s proposal, which also makes extensive use of specific plants that attract butterflies and where every apartment is provided with its own nesting box to provide shelter for birds. Rainwater is also carefully collected and recycled for a variety of uses.

However, just because it is focused on the theme of biodiversity does not mean that everyday living in this future urban environment will be impractical. All of the dwellings are equipped with 5G internet to facilitate working from home. The plans also aim to reduce the use of motor vehicles, however these are partially replaced by drones for the delivery of internet purchases, provisions to encourage cycling, widely available public transport and a fleet of electric taxis. Alongside all of this, the proposal also features much of the infrastructure that makes urban living enjoyable today, including a market, stores, a swimming pool and a childcare facility.

Sign up to get the latest luxury and lifestyle news delivered to your inbox.
AFP Relaxnews
Architecture