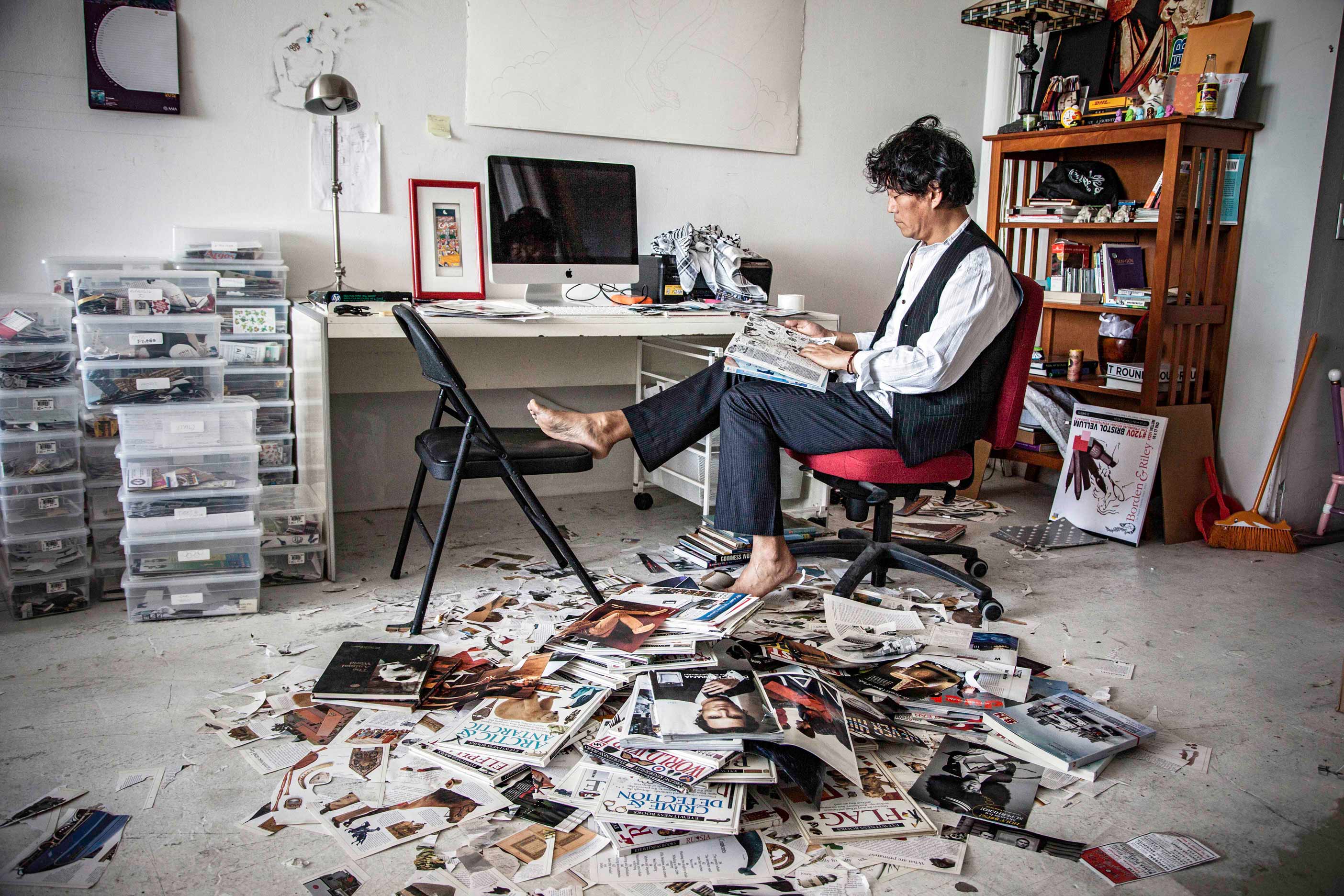 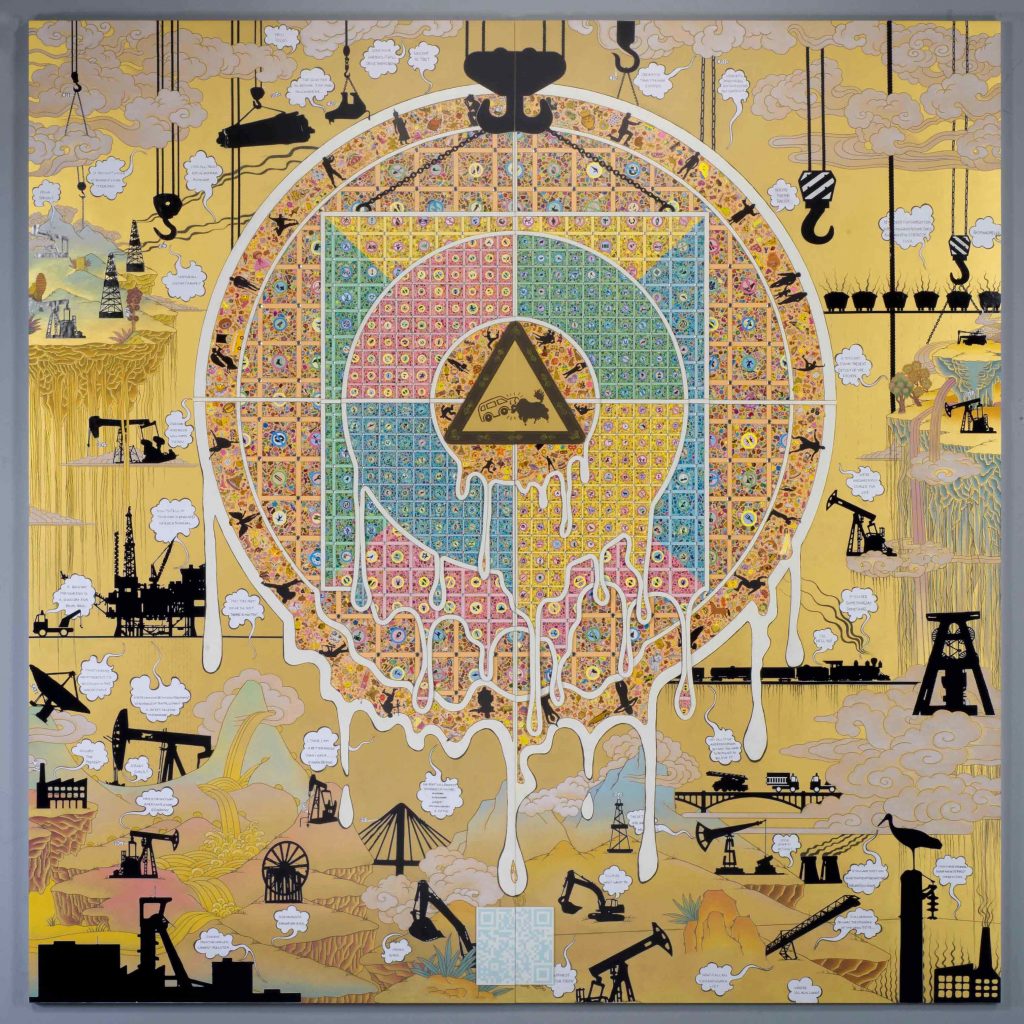 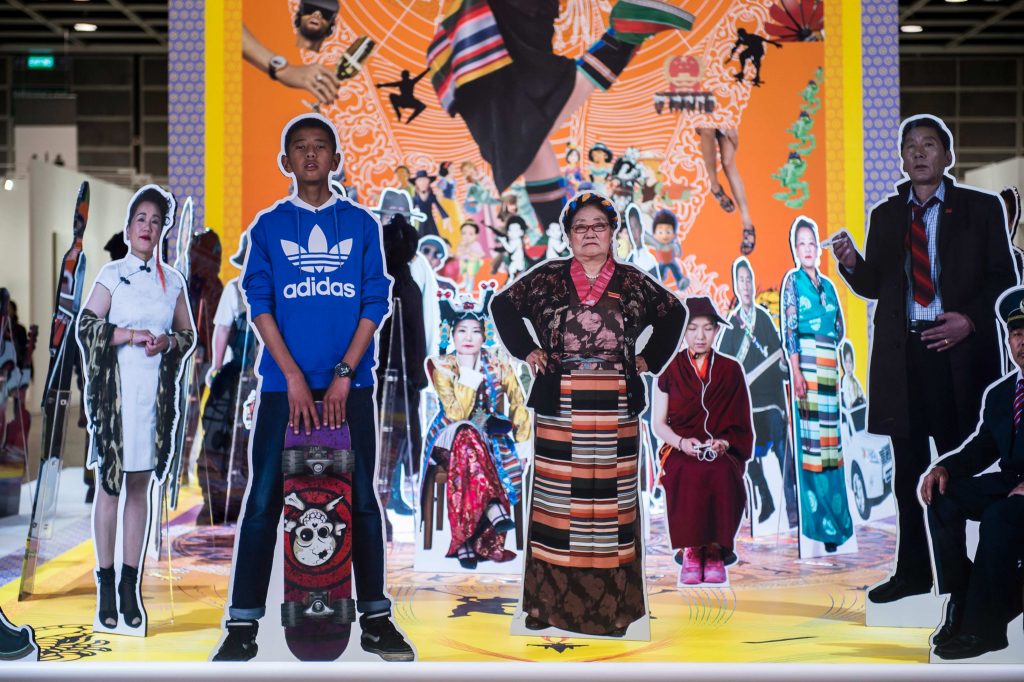 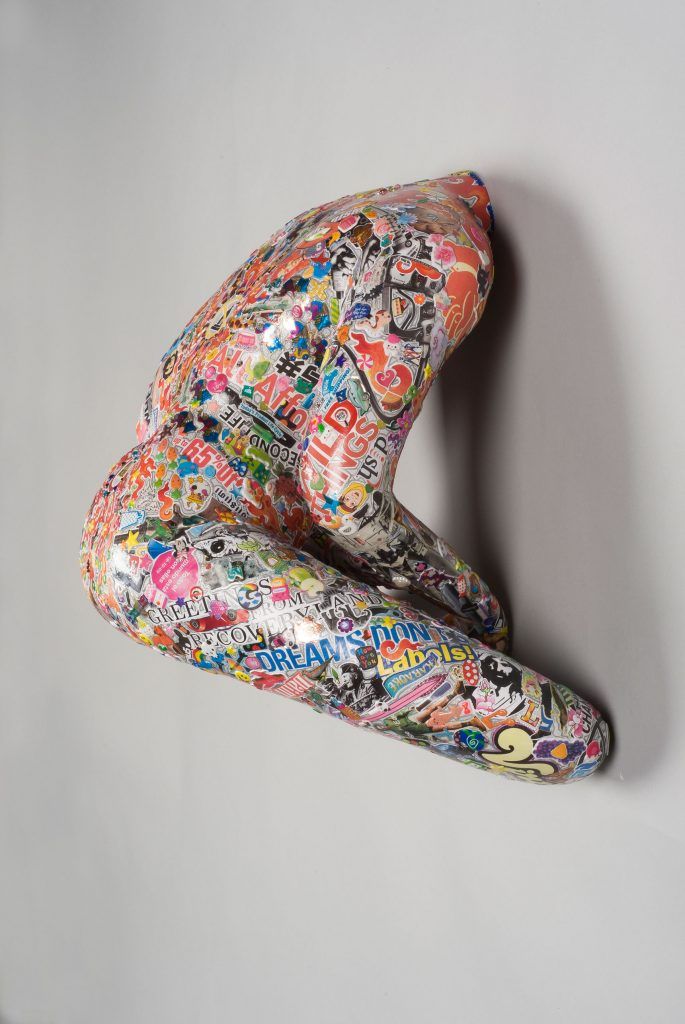 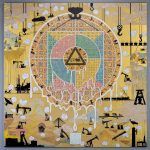 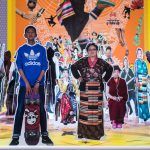 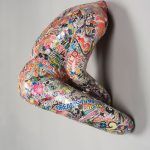 With tweed cap perched atop curly locks, Tibetan-born British artist Gonkar Gyatso, who studied fine art in Dharamsala, Beijing and London, is as happy to talk about what’s behind his often (but not always) Buddhist-themed mixed media pieces as he is about the geographical movements of his life. At this year’s Art Basel in Hong Kong, where he showed wall-hung pieces in the Pearl Lam Galleries’ stand and a large photographic installation in a shared area where singular avant-garde works were displayed, laid-back Gyatso waxed lyrical.

For the past two years he’s been working on his mixed-media Mandalas series. Most of these works create forms with repeated use of some of his self-designed stickers that bear images from Tibet.

“I’ve been using Tibetan monks,” he explains as we stand in front of an untitled work of spiralling circles of stickers that he made in late 2016. “This repeating is associated with all religions, as a part of their practice.”

Gyatso designed 26 different images for stickers that appear in the series, which he started work on almost 15 years ago. Many stickers he finds and uses, though, are devoid of a Buddhist theme. Some pieces are reliant on stickers only, while others in the series mix media more prolifically – such as Shangri La, from 2014, with its gold backdrop and black industrial-equipment silhouettes that use acrylic paint and pencil in more obvious painterly ways.

Gyatso works on paper in many of his pieces. “I have a principle that my work should be accessible – with subject matter and price,” he says. “The limited edition of prints is such a good idea, because you can offer 100 or 50 at a much lower price [per work]. Somehow when works end up in a gallery or collection they become quite expensive.”

Ask the artist, who has pretty much become associated with images of Buddhist deities in one form or another, about religious meaning in his work and he says, “Even though I use Buddha images in my work, it’s actually about everything in our life. It’s about the city, life surrounding me, and news.”

Indeed, one collage that makes the form of a seated Buddha in the artist’s showcase at Pearl Lam displayed the word “Hackney” in large letters at its centre. It’s from the period when Gyatso spent a lot of time in that partly gentrified area of East London that’s become more and more patronised by artists and commercial galleries in the last three decades.

“At that time, broadband was becoming more popular,” he recalls. “People started taking more pictures of what they were eating, more information about ingredients appeared on supermarket labels and shops were doing more promotions in magazines and on the Internet – I started using [excerpts of] all of these in my work.”

When he moved to New York from London six years ago, Gyatso’s medium didn’t change. Since “around 2000” he’s been steadily creating more custom stickers to use alongside ones he finds. He first started using stickers as a main component in images when he was in London in 2003, prompted by those his daughter – then aged 10 and attending primary school – stuck in her notebooks.

“These grabbed my imagination,” he says. “I’d not seen many in Tibet or China. I still find great ones in the West and Asia – some come from youth culture, some can be quite political.” When he realised not many were produced in Tibet, he decided to make his own using typical imagery from there: monks and yaks, among others.

The scale of some pieces grew and he began experimenting with three dimensions. Sculptures, often seated Buddha forms, became a three-dimensional take on the old sticker-covered theme. “Soon after starting my [resin] sculptures,” he says, “I got interested in photography to explore issues. In photographs, what interests me most is identity.”

Gyatso’s dynamic sprawling installation piece Family Album from 2016 presents 17 photographic cutouts of the artist’s family and friends – these appear to be life-sized but actually vary in scale. He styled clothing, accessories and poses that spanned traditional, uniformed and modern social reflections on Tibetan citizens, in proud postures; and he directed photography. Images were framed with a ceiling-hung Chinese painting-like scroll.

Imagery in this piece and in some Gyatso assemblages begs the question: is any content politically driven? “I think my work is political;” he says, “I’m really interested in what’s happening in the world and I try to show these concerns in my work. I’m not interested in just one geographical place but in a bigger sense of political subjects, like humanity, human rights, even about animal rights.”

Gyatso is now based in Chengdu. “I moved there two years ago – my aim is to go back to live in Tibet, and it’s close,” he explains, having previously not lived there for 26 years. “We all know what’s happening in China, including Tibet, is a huge change – I wanted to go back to see and witness this.

“China is not the China I used to know. The changes are staggering. Cultural aspects and even the language are evolving. Sometimes when I speak to young Chinese they tell me I speak differently to them and use old-fashioned words and vocabulary.”

With such regular movement from place to place, does Gyatso have any affinity with artists in any of the countries he has lived in? “In a way, I identify with artists like Chris Ofili – a British artist with a background from somewhere else [his parents emigrated from Nigeria]. We both explored our own heritages while being involved with life in London.

“I like artists that show some playfulness – like some of the fun stuff by the likes of Jeff Koons and Takashi Murakami.”

Immediate plans for Gyatso concern his playful Family Album. “I want to expand it,” he explains. “I have family in Nepal, Shanghai and New Jersey – I’m hoping to travel to all these places in the next two to three years and complete the project.”

Also on his bucket list is to step away from his signature work and capture the natural beauty of his homeland. “In Lhasa recently, diving back into the Himalayan landscape gave me a new dream,” he confesses.

“I imagined myself doing what I did in the early ’80s: driving a pick-up truck around Tibet, doing some landscape stuff. So I might become a landscape artist one day.”