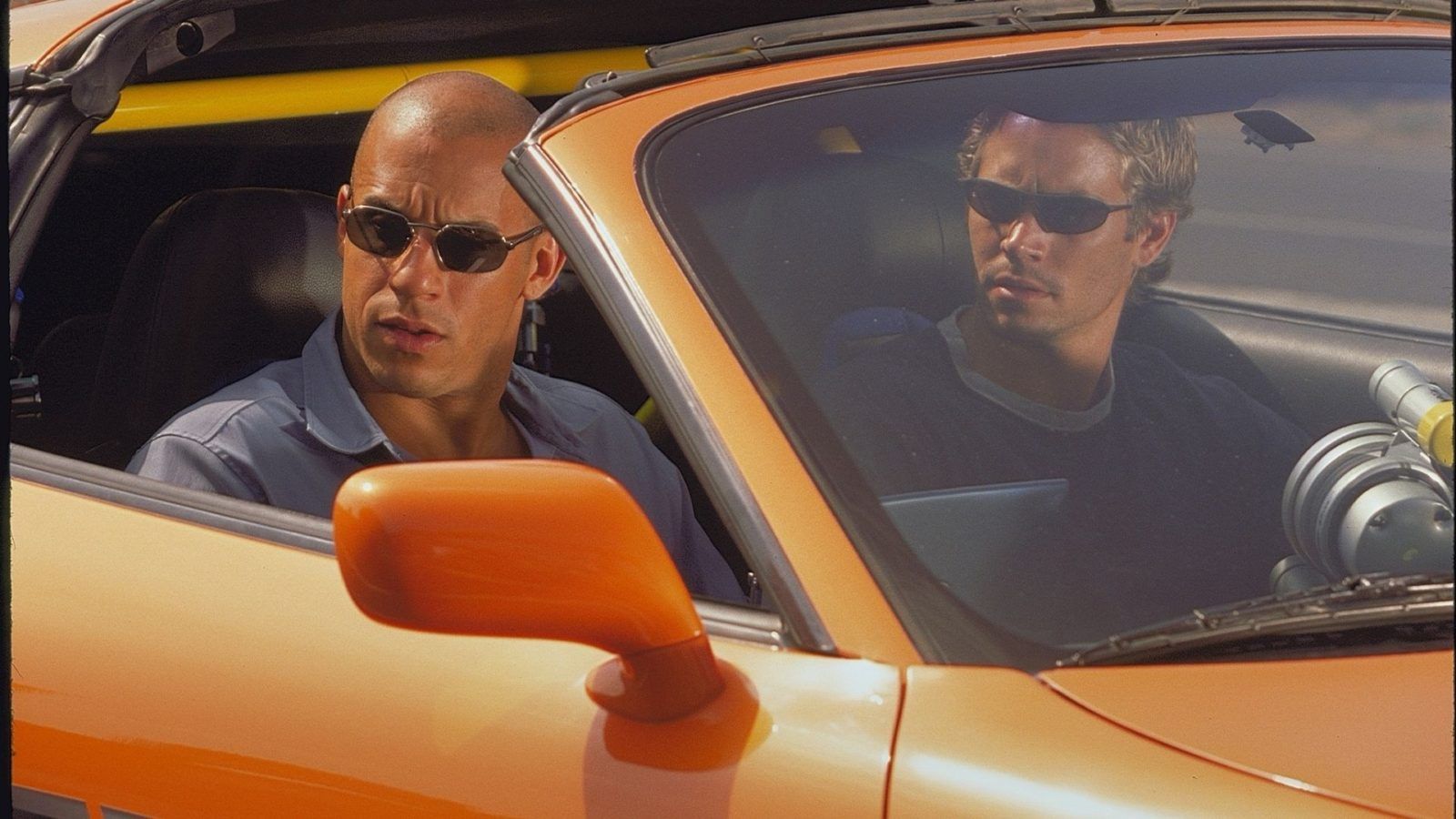 Love all the cars from the Fast and Furious movies?

Twenty years after the first Fast & Furious movie was released, the cult-favourite film franchise continues to influence the portrayal of cars in cinema. With flashy, fancy and furiously fast machines, the films have featured some of the coolest vehicles in movie pop culture and raked in millions of dollars in the process.

Embodying each character’s qualities, the cars showcased in the Fast & Furious movies demand attention and have been given an identity of their own. From Suki’s (Devon Aoki) Barbie pink Honda S2000 in 2 Fast 2 Furious to Brian O’Connor (Paul Walker) and Dominic Toretto’s (Vin Diesel) rare sports car, Lykan HyperSport from Furious 7, the film series has always delivered scene-stealers to the delight of car enthusiasts.

One of the most iconic cars from the Fast and Furious franchise is the orange Toyota Supra, which Dominic and Brian restore all by themselves in the film. Working together on the vehicle seals the bond between the two lead characters.

The show-stopping Supra is used throughout the movie and becomes Brian’s primary car. With the original 2JZ-GTE engine, the Mk-IV could go up to a dizzying speed of 300 kilometres per hour (approximately).

At the end of the movie, Brian competes with Dominic in his orange Supra, while they attempt to outrace a moving train. The same car was redone and featured as Slap Jack’s (Michael Ealy) car in the sequel, 2 Fast 2 Furious.

The legendary orange Toyota Supra was recently auctioned for over half a million dollars at Barrett-Jackson’s Las Vegas sale in 2021.

Matching Suki’s all-pink outfit was the eye-catching ‘Barbie’ pink car that appeared in the opening race scene of the second Fast and Furious movie. In the film, Suki manages to jump her car over a drawbridge, ripping off its front end. However, she still keeps going to finish the race like a star.

Spawning one of the most memorable cars in the Fast and Furious franchise is the customised black and orange 1997 Mazda RX-7 from Tokyo Drift. The car was driven by Han Seoul-Oh (Sung Kang) and Sean Boswell (Lucas Black) while travelling through Tokyo in Japan.

In addition to other daredevil stunts executed by the lead characters in this powerful machine, like trying to escape the Japanese police, Han tragically gets hit by a Mercedes while driving the Mazda.

The Mazda RX-7 from this movie was built by VeilSide, a Japanese aftermarket automotive company that started by selling suspension and engine tuning parts. It went on to sell interiors, as well as body parts for the aerodynamic and aesthetic enhancement of a vehicle. For the film, Universal Studios acquired the car and then modified it.

VeilSide equipped the 1.1 L engine with an Apexera Power FC engine management system, HKS TO42 turbo kit and V-mounted intercooler. It also features custom intercooler piping and NKG racing spark plugs. It is possible to order a car like this one from the company, as part of its ‘Fortune’ kit, a premier aerodynamic body kit for the legendary Mazda RX7 FD3.

In Tokyo Drift, when protagonist Sean challenges the ‘Drift King’ Takashi to a race and he accepts it, the former starts rebuilding his father, Major Boswell’s 1967 Ford Mustang Fastback with the help of his friends. Found on an army base, Sean uses the car to race Takashi down an unknown mountain.

Originally, the Mustang got its twin-turbo RB26 engine from an R34 Skyline GT-R. However, the RB26 engine was promptly put back in the R34, as the twin-turbo system could not fit between the shock towers. A different block with a single-turbo setup was swapped for it. The car officially offers 340 horsepower at 7,300 rpm.

Although the Mustang was capable of carrying out drifting stunts for the movie production, five to six stunt cars were used for this purpose instead.

To match Dwayne ‘The Rock’ Johnson’s towering physique and magnanimous personality, the V-8 powered Gurkha LAPV was brought in especially for Fast Five.

Weighing about 7,500 kilograms, the Gurkha LAPV is a Canadian manufactured armoured military vehicle, driven by Luke Hobbs (Dwayne Johnson) and his fellow Diplomatic Security Service (DSS) agents. Hobbs is a highly skilled bounty hunter for the DSS and the lead federal agent whose job is to capture Dominic and his team in the film.

Although we only see this beast of a car briefly raging through the streets of Rio de Janeiro in the movie, the scene is remembered by many fans of the Fast and Furious film series.

A brief but memorable cameo made in Fast & Furious 6 is by the blue and white Ford Escort RS1600. In the film, Brian is seen dramatically driving this car in pursuit of Owen Shaw’s (Luke Evans) tank on a Spanish motorway. In a scene that destroys a Ford Mustang and Dodge Charger Daytona, the Escort luckily escapes with only light cosmetic damage.

During this adrenaline-pumped race, Brian realises his friend, Roman Pearce (Tyrese Gibson), is in danger of being crushed in his 1969 Ford Mustang Fastback by the tank. To save his friend, Brian makes use of the Ford Escort’s rally-spec suspension and propels the car from a makeshift ramp created by the debris of a bridge.

With only seven Lykan HyperSport cars ever made, the car created by W Motors helped the company achieve international fame when it was featured as the hero car in Universal Studios’ Furious 7. It is also the most expensive car ever to be included in the Fast & Furious franchise and the third costliest car in existence. Actor Vin Diesel owns one of these in real life.

In Furious 7, we see Brian and Dominic ‘flying’ the USD 3 million supercar through buildings and ultimately crashing it. However, the real car was not used in the production; Lykan built only the exterior body for the movie and fitted it with rollers on a Porsche Boxster chassis.

One of the fastest cars in the world, the original Lykan HyperSport is an extravagant and luxurious car, featuring seats sewn with gold and headlights embellished with the buyer’s choice of jewels, including rubies, diamonds and sapphires.

The iconic 1966 Chevrolet Corvette C2 Sting Ray is a car driven by Letty Ortiz (Michelle Rodriguez) in the film. The beautiful red, old-school-style car is a two-door coupé with a whopping speed of 225 kph.

In the movie, Letty is seen picking up the red Corvette and working on some modifications at a secret spot near the docks dubbed the Toy Shop.

The 1970 Dodge Charger R/T was the signature car driven by Dominic in The Fast and the Furious, Fast & Furious, Fast Five and Furious 7. It was destroyed in Furious 7 when Dom competed with Deckard Shaw in Los Angeles, only to briefly reappear at the hideout in F9 (2021).

With a top speed of approximately 209 kph, the Dodge Charger R/T is a coupé with two doors and a front mounted naturally-aspirated engine of 7.2 litre capacity. This transmits the power to the rear wheels.

The Dodge Charger has undergone modifications in almost every Fast & Furious movie it has appeared in. While the one from The Fast & the Furious offered 900 horsepower and a rear wheel drive, Fast Five used six of the same cars in the film; out of which, one was constructed with a blown 528-cubic-inch Hemi V8 cylinder. Built with a pro-2 chassis with a Dodge Charger body on top, the car from Furious 7 was specially modified for off-roading.

The features of the original Dodge Charger R/T includes an overhead valve gear and a 90-degree V-8 cylinder layout.