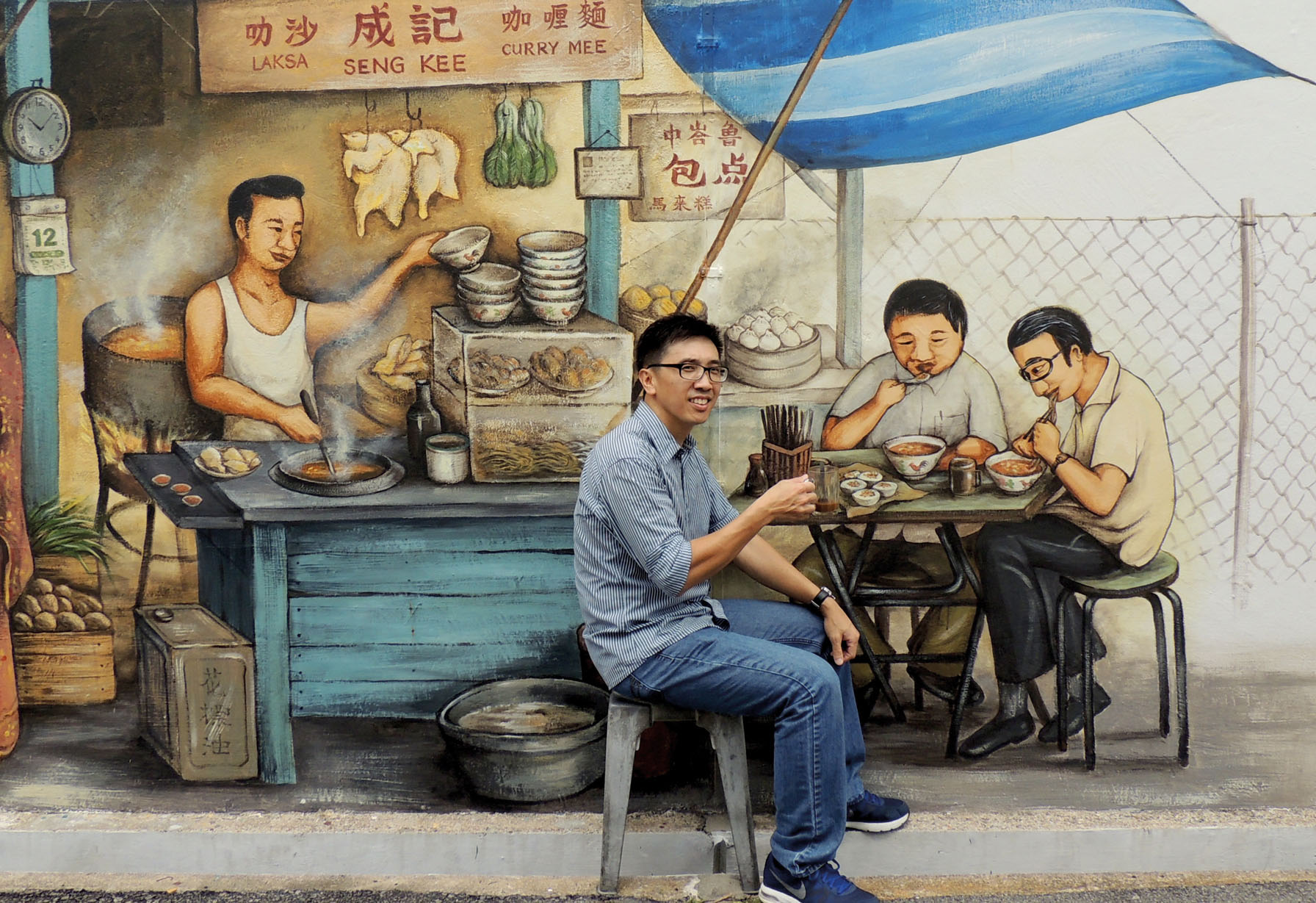 A smiling Caucasian woman places her hand knowingly on the knee of a mural of a seated uncle at Tiong Bahru’s bird singing corner. An Indian yogi contorts himself to the bemusement of pigtailed children painted on the rear perimeter of Thian Hock Keng temple.

Self-taught muralist Yip Yew Chong’s vertical art, largely of vanishing or vanished scenes of Singapore, aren’t just Instagrammable backdrops for often hilarious selfies. His brushstrokes are stoking the kampung spirit and tugging heartstrings in more ways than one. Members of one church photographed themselves in outfits and props matching Yip’s murals for a free calendar they distributed. One blogger cried on seeing the mural of a father reading the newspapers in an early HDB flat. The details, right down to household items from the rotan to the floral thermos flask, are familiar to her and no doubt many.

As he paints, people often come up to thank him for the happiness his work brings. Passers-by of various races have helped verify the authenticity of objects and script he reproduces. One senior gent pointed out that Samsui women only carried bricks. They didn’t lay them, as Yip depicted in the 44-m long mural behind Thian Hock Keng temple. That particular one was a mistake, Yip admits, although he often deliberately combines elements from different eras within a single mural, “moderating the aesthetic with accuracy”.

“I enjoy the process of creating from a blank wall, a piece of art that people can relate to, and reflect on their own [childhood] memories,” says the affable artist, who looks half of his 48 years. He has a daughter, aged 18, and son, 20, with his homemaker-wife.

Yip draws from his childhood memories, fleshing out details with the help of Googled images or old photographs. Cats, a recurring motif, are from his boyhood impressions that they were aplenty in old Singapore. “My family’s cat, Mary, was not a pet, but supposed to catch rats. She was flirtatious and would always come home pregnant. She bore so many kittens,” he recalls.

Early in his mural painting foray, Yip didn’t want to be “pigeonholed as a heritage painter”. But he’s since recognised that he’s one of several artists who use a variety of mediums to evoke nostalgia. “It makes you have a sense of belonging to a place you recognise, because Singapore is changing so fast. Things get bulldozed so fast — both heritage and natural,” says this nature lover and Treasurer of the Nature Society (Singapore).

To date, Yip has painted about 25 (and counting) murals. These include panels under the grand staircase of the National Museum of Singapore, built in 1887, and depict icons in the museum’s collection.

Yip never expected such a realm of opportunities to open when, inspired by a small mural by Ernest Zacharevic, he painted his first in August 2015. Yip found a suitable wall and plucked up the courage to call the property agent who had advertised an Everton Road unit for rent. He convinced the owner, Dr Victor Choa (great-grandson of pioneer Choa Kim Keat), to let him paint for free, promising he would whitewash it if Choa didn’t like the results. His images of an amah washing sarongs and of the street barber shop started appearing on social media and in newspapers, and requests starting coming in. Yip no longer paints for free.

Yip’s first “requestor” (as he dubs his patrons) was Tan Dib Jin, grandson of late philanthropist Tan Kah Kee. Tan, an advisor to the Singapore Watercolour Society, was keen to promote an upcoming artist. He asked for a kampung scene for the exterior wall of his bungalow at Tanah Merah, to reflect the area’s past.

Heritage scenes don’t work everywhere though. Yip insists that murals should suit the surrounding architecture and mood of the area. He shares of one project that was called off as the requester wanted a nostalgic feel but, “I felt that the community should have a forward-looking, aspirational theme.”

Not that Yip is short of walls to paint, with requests coming in fast and furiously. For genuine charities with volunteer painters, he helps if he can, in terms of direction and sharing his skills. He however, will not touch up their work, for example, when once asked to at a community home. “It was the resident with trembling hands in a wheelchair that painted that tulip. He sees it everyday. He must feel that achievement.”

Yip now focuses his efforts on street art that the public can access freely. “There’s no point in telling a good story, where not many people can see it,” he reasons.

Despite the flood of requests for his work, one location still eludes him:  Chinatown, where he was born and lived for 26 years. “On my own initiative, I approached authorities and organisations in the area, but it’s proving too complex.” On its streets, people used to gather around his late father, who drew in chalk actresses of his time, Yip learnt from an aunt after he started on his murals.

There have been discussions for Yip to leave his mark elsewhere in Asia. But it’s difficult for him to take on overseas projects, given his full-time job as a finance director in a multinational company headquartered in the UK. His only overseas mural is in a Hong Kong restaurant, which he took on as a half-holiday,

Yip is thinking of scaling back on his murals as it now eats up his weekends, and the rabid globetrotter, photographer and aspiring filmmaker’s other interests have taken a backseat. Yip also hopes to get formally trained as an artist.

For now, he’s basking in the attention that he insists is temporary — just like his murals. After all, his outdoor pieces are painted with emulsion and highlighted with acrylics and, he estimates, will last only three or four years.