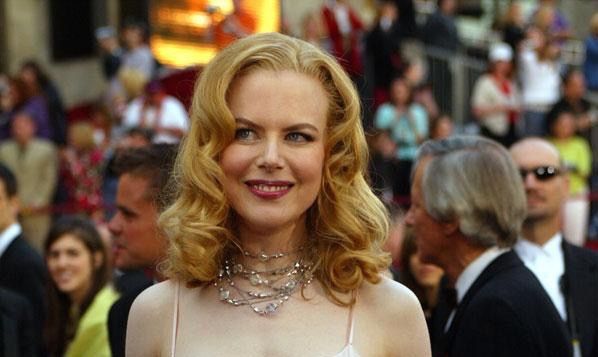 As the excitement builds for the 88th Annual Academy Awards, we take a look back at some of the winning looks on the red carpet in recent years;

There is many a gown worn by the elegant Nicole Kidman that are favourites, but mine is this chiffon Chanel Couture gown she wore to the Oscars in 2002. It was the first time she attended the Academy Awards in her own right, nominated for her role as the tragic courtesan Satine, in the film Moulin Rouge, and not on the arms of ex-husband Tom Cruise. The pale pink gown which featured layered details and frills gave Kidman a  softer persona, a side that perhaps till then the public had not seen from the oft-perceived “icy” Nicole. Kidman said the gown made her feel like she was going to the prom.

Though it is the navy Guy Laroche that Swank wore when she picked up her second Oscar that frequently makes the best Oscar gown list, it is this bronze ballgown that she wore in 2000 that resonates with me. The image was a sharp contrast to that of the transgender Brandon Teena in Boys Don’t Cry, the role for which Swank was nominated. The choice of a ballgown may be a tad “fairy-tale” for the red carpet but it is forgivable, given the fact that Swank had just come off playing a “boy” on screen. Swank said she made her decision based on the reaction of her then husband Chad Lowe when she put it on.

The common denominator on all Oscar gown lists is the vintage Valentino worn by America’s sweetheart Julia Roberts. After a clean sweep during the awards season which saw Roberts win the Golden Globe as well as the SAG, it was pretty evident that Roberts would be the one to triumph in the lead actress category at the Oscars. Her choice for the evening was a black velvet outfit with white ribbon detailing at the back. The fitting gown stuck to her silhouette so closely that she required the arm of her then boyfriend Benjamin Bratt to make it up the stairs to receive her award. Valentino has even described dressing the Oscar winner as the highlight of his career.

Charlize Theron has worn many a beautiful gown on the red carpet but I happen to be drawn to the gown that many regard as a “miss.” Minimalism is at times overrated and there are times when you need a little drama. The Oscars is certainly one of those occasions and Theron is surely one who can pull it off. To celebrate her second best actress nomination for the film North Country, Theron opted for an emerald gown, enhanced by a big bow on her shoulder. Critics deemed it distracting but it distinguished the statuesque former model from the typical “pretty” dresses paraded by other celebs. The construction of the dress, with its structural, overlapping layers, remains one of the most interesting Oscar looks of all time. The gown was specially designed for Theron by John Galliano.

Experts cite the vintage Dior gown that Reese Witherspoon wore when she won her first Oscar for Walk The Line as being a favourite. But perhaps it was a trifle stately for the usually youthful Witherspoon. A year later, she looked years younger wearing a deep purple Nina Ricci gown. The actress collaborated with designer Oliver Theyskens, saying she wanted something “special and true to her”. It took 40m of silk jacquard to create the bustier gown that opened into a cascade of ruffles. Witherspoon is said to have described it as “the most beautiful dress” she has ever worn.

In 2002, Halle Berry made Oscar history, not once but twice. Firstly, she broke barriers when she became the first African American actress to win a best actress Oscar for her role in the film Monster’s Ball. The other and, perhaps, more frivolous reason is that she cemented her place on Oscar best dress “of all time” lists with this Elie Saab gown. The dress paid tribute to Berry’s sex- symbol image with a sheer top that was embroidered in strategic places. The Saab creation has become so iconic that it was even featured on The Simpsons.

In 2006, British actress Keira Knightley claimed the “It” girl label, as she made her on the red carpet circuit. Nominated in the lead actress category for her role in Pride And Prejudice, Knightley mesmerised when she arrived at the Oscars in a custom-made Vera Wang gown. The one-shouldered, wine-coloured silk taffeta gown appeared to have been inspired by the era of Jane Austen but with an edgy twist. Though the gown has since been hailed as a red-carpet best, Knightley donated it to Oxfam to be auctioned off for charity.

Cate Blanchett is always one to look out for on the red carpet but to me, it was her debut at The Academy Awards that remains a favourite. Wearing a gown specially created for her by John Galliano for Dior haute couture, Blanchett established herself as a force to be reckoned with at future Oscars. Nominated in the lead actress category for Elizabeth, Blanchett might have conceded the Oscar to Gwyneth Paltrow but won in the fashion department as her navy gown outshone the sweet pink gown worn by Gwyneth Paltrow, who won the Oscar that year.  The highlight of the gown was the embroidered details on the plunging back. Blanchett described it as her “fashion orgasm”.

Layers of tiers and tulle? Surely those are the ingredients for princess type gowns that spell disaster on the red carpet. But Marion Cotillard pulled it off effortlessly in 2009, when she turned up in an elaborate gown by Christian Dior. After an “interesting” fish tail dress by Jean Paul Gaultier – complete with scales – the previous year when she picked up her best actress award for Le Vie En Rose, Cotillard opted for this navy romantic number, to acknowledge her successor.

Black is often the colour of choice for the sultry Angelina Jolie. In 2009, she remained true to herself but opted to showcase her softer side in this understated Elie Saab gown that only hinted at her sexier side, with the sheer skirt giving us a peek at the infamous leg. That night, she looked like a woman who had it all as she turned up on the red carpet with Brad Pitt on her arm to be acknowledged for her role in the film Changeling.