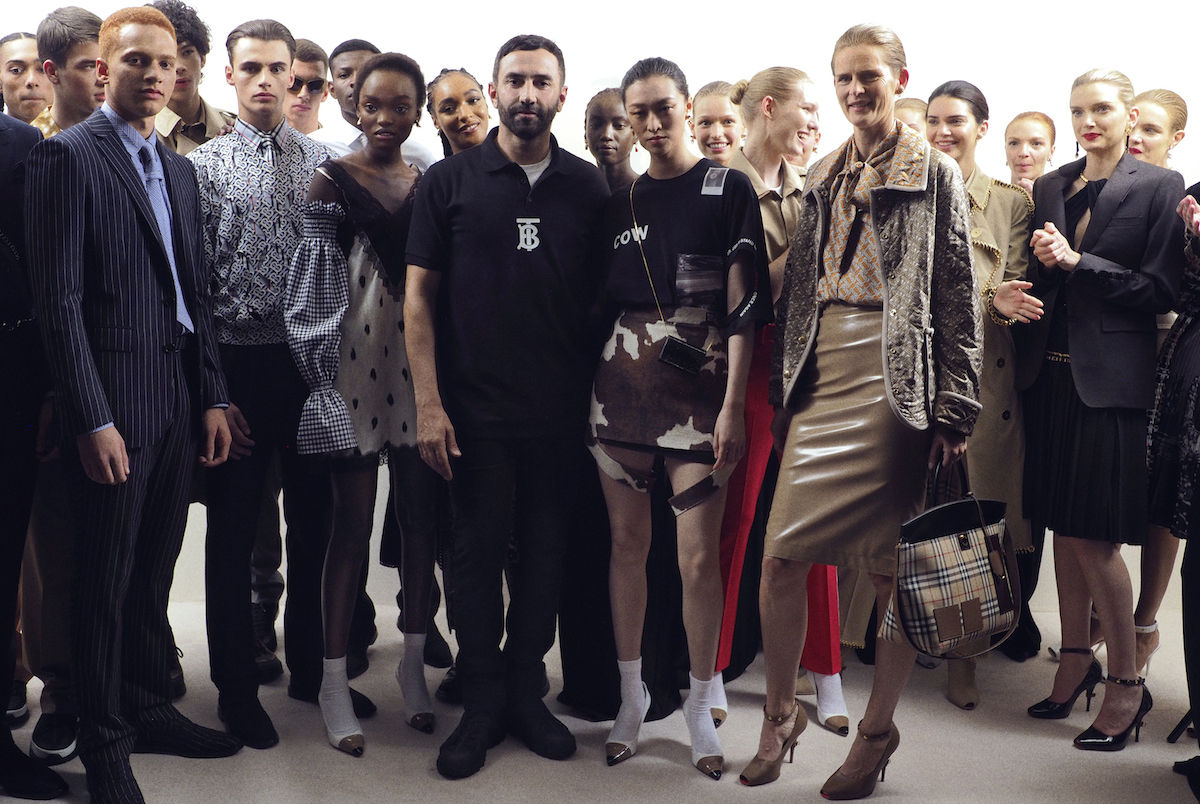 London Fashion Week kicked off with Riccardo Tisci’s debut collection for Burberry on Monday night. Appointed chief creative officer back in March, Italy-born Tisci is an unlikely choice to run the the brand, whose spirit and sensibility are deeply rooted in British cultures and lifestyle. Did he bring that famous dark gothic sensuality, metal, and streetwear to the house that’s built on the values of British bourgeoisie? Here are 5 things you need to know about Riccardo Tisci’s first Burberry collection!

First thing first, you see everything you expected to see but it comes to you separately. The show is divided into three parts:  Refined, Relaxed, and Evening. We’d rather call it “Burberry’s Britishness, Tisci’s streetwear and Tisci’s evening wear.” The first features beige, trenches and British tailoring. The second offers Tisci’s signature oversized streetwear and sportswear, heavily laden with punk spirit — another unmistakably British legacy. The evening wear session, we guess, is the new designer’s initiative designed to give Burberry a red carpet boost.

2. It’s a British melting pot of cultures, but it’s not unified.

The collection celebrates the diversity and the heart of England – the melting pot of creativity and style traditions from the punk and rebellious, to the formal and refined, all co-existing together. Interestingly, this diversity and difference rarely exist in the same look, or even sections in the show. The rebellious punk is in the second, streetwear part while trenches, tailoring, 1980s bow blouses, lovely pleated dresses and skirts are in the first part, especially for the womenswear. An exception is one trench coat and silk blouses with gold-coloured hoops trimming, which really are the star of the collection.

Tisci’s definitely done a lot of homework when it comes to reworking house checks and monogram — the long-cherished epitome of Burberry’s Britishness. His first huge drop was back in July when Burberry unveiled the brand’s new graphic identity, designed in collaboration with the legendary British art director and graphic designer Peter Saville. Fun, funky and quirky, the new logo and monogram reflects the heart and soul of British sensibility. Another rework we’re drooling over is house checks pared down to stripes. So sporty and very modern!

Compared to his debut at Givenchy back in 2005, the Burberry show is much less radical (remember that leather in a couture show?). His parade of trenches and beige reflects his respect to Burberry’s core value. But we really love it when he puts the Tisci’s signatures on the plate like his penchant for animal prints: deer, leopard, Dalmatian dots and a mock astrakhan. We adore his love for lingerie, which we see in some underskirts, camisole and that bra corset in Burberry’s iconic gabardine.

In addition, the designer seems to be more at ease with the menswear collection than with womenswear. Gone were the campiness and effeminate romanticism of Christopher Bailey’s fallen aristocrat look. Tisci’s vision of the Burberry men is more masculine. The mix of rough sensuality with British tailoring on forms that are urban, sporty and modern paves way for a new silhouette that makes you suave like a true Brit, and macho like an Italian.

5. Like the clothes, accessories are a mix of ladylike essentials and fun items.

Belt bag? Check! Slogan? Check! Logo socks?  Check! Trainers? Absolutely! All those sporty items will sell a lot when the collection hits the store. However, we know this is the man behind those hit “It Bags” we remember by name (Pandora and Nightingale, to name but a few). Tisci’s debut collection for Burberry sees some nice envelope clutch (in beige, and closed with a gold metal Burberry logo clasp), a giant tote with metal grommet details and a monochrome flap bag with silver metal chain handle. Women’s shoes alternate between prim and proper pumps with ankle straps, chunky patent Mary Jane, and cap toe pumps, worn mostly with white socks.

Check out www.burberry.com for more information.