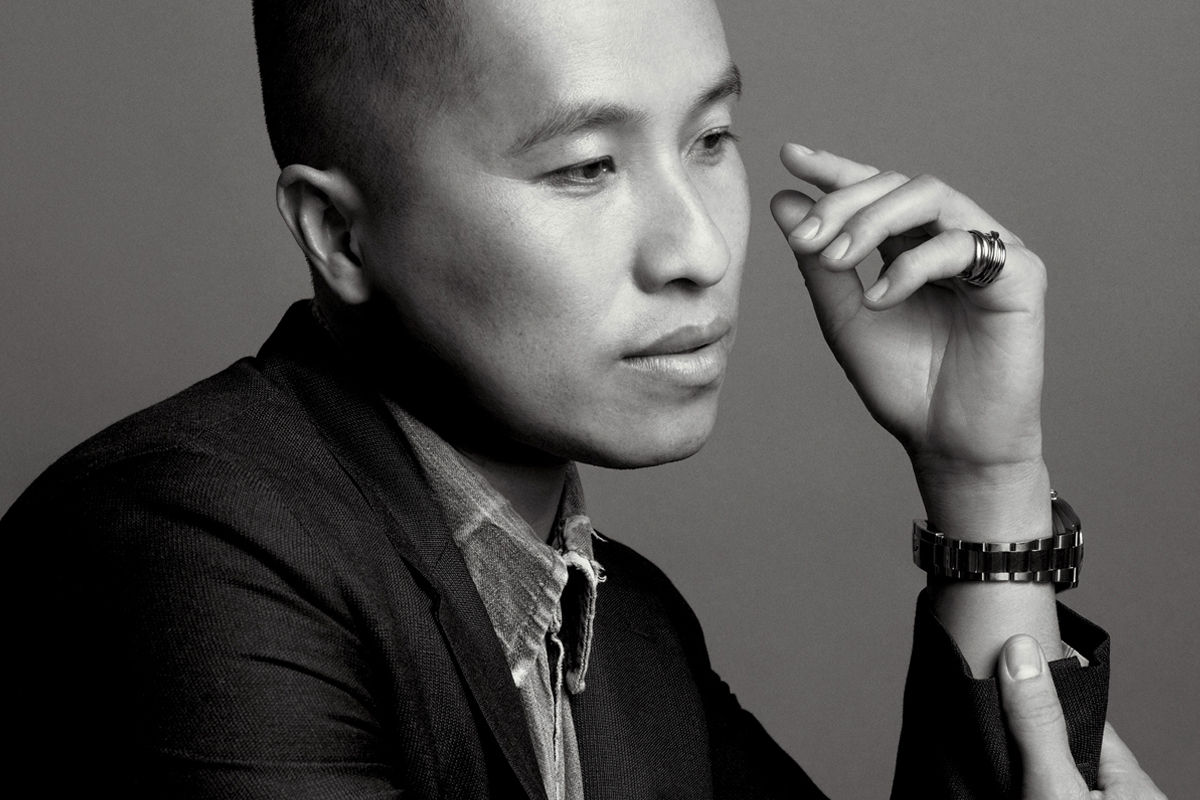 Phillip Lim reacted strongly when Interview magazine published a style shoot he deemed racist in its August issue. Shot by Billy Kidd, one of the photos shows an Asian model walking around New York City’s Chinatown, while carrying Chanel bags. She carries them on her shoulder with a long bamboo stick, while wearing a straw hat.

Lim, an American designer of Chinese and Cambodian descent, shared his opinion about the imagery on his Instagram page: “These images reinforce several stereotypes that Asian immigrant communities work so hard to break from.” He goes on to list the stereotypes he sees in the imagery, among them the linkage of Chinese to counterfeited goods. When Prestige asks him about racial issues in America, Lim admits that “it’s a challenging time. As an Asian American immigrant, I will never forget that my parents sacrificed so that I could do what I love today. Because of that, I will continue to challenge stereotypes – the “challenger spirit” is something I celebrate in business, brand, and in my personal life.”

Racial solidarity aside, Lim has a legitimate reason to bash Asian, especially Chinese, stereotypes. His namesake label 3.1 Phillip Lim is partly manufactured in China, as to achieve Lim’s vision to create designer clothing that is reasonably priced.

Since starting his career in 2000, the designer has gained both critical and commercial success. His debut as a designer was a Los Angeles-based womenswear line Development, which he started with a few partners. The label was closed after four years, to give room for Lim to start a more refined one. So began his namesake label in fall 2005, two years after Jason Wu’s debut. Wu, who is a favourite of Michelle Obama, has often been compared to Lim as an Asian designer who has made it internationally.

The numbers on his namesake label reflect Lim’s, and business partner Wen Zhou’s, age at the time. His status as a designer was legitimated with the Emerging Talent in Womenswear award from the Council of Fashion Designers of America (CFDA) two years later. In 2012, Lim was awarded by the council for his vision in menswear.

As a designer who thrives in both womenswear and menswear, Lim says he takes a similar approach in designing for both genders. “It starts with a unique inspiration and then we go from there,” says Lim, who studied home economics at California State University, Long Beach. “With menswear, it’s a bit more personal in the sense that I am a man and I wear the clothes myself, but the introduction and the process is always the same and I am always thinking about how pieces fit together, how they can be layered, taken apart, mixed and matched. For me, style and taste is genderless.”

Lim’s forte as a designer lies in his practicality, or as Vogue describes it, “ he is pragmatic”. For fall, the designer shows a mostly black and white collection, with an exception of “Yves Klein blue” and shades of pink in between. “Black and white was the perfect foil for the pops of candy pink and electric blue we also showed in the fall collection. I wanted a dynamic, energetic show for the season.” Overall, Lim means for the collection to be feminine both in colour choice and tailoring.

Quite the opposite is the case of the menswear. Lim leaves the styling of his fall collection to model and muse Paolo Roldan. Roldan, who himself is an Instagram star, pairs the season’s coat and bomber jacket with skinny black jeans and white t-shirt. In other pairing, Roldan mixes whites and khakis in layers. The pairings are captured in the seasonal campaign. “I wanted to challenge the system by inviting my friend Paolo Roldan to self-style the collection. Taking down the smoke and mirrors that are often present, this approach felt real and more intimate. The result is truly a representation of how the modern man gets dressed.”

Although he designs for both genders, Lim has no plans to go co-ed in terms of fashion shows, a step that has been taken by Burberry, Marc Jacobs and Coach. “I will never say never, but at this time, no. For me the collections are independent because the man and the woman wearing 3.1 Phillip Lim have their own stories, their own points of view, their own inspiration.” No surprises there, seeing how Lim has always danced to his own rhythm. Unlike other high-profile young designers with stints at legendary fashion houses, say Public School’s Humberto Leon and Carol Lim at Kenzo and Jason Wu at Boss, Lim has always designed for his own labels. Last year, Bloomberg estimated in that his namesake label earns USS100 million annually.

Personally, Lim thinks of himself as “an evolutionary designer, not a revolutionary one.” His sentiment reflects how Zhou regards the designer and partner. In an interview with Bloomberg, she said: “He is slow and steady, the opposite of fast fashion.”

Having said that, Lim feels right at home in New York. When asked of the things that inspire him, the designer mentions “the energy of New York City”. He shares a penthouse SoHo loft with his French bulldog Oliver.“I’m inspired by the world around me, as cliché as that may sound. In a broader sense, by my travels. Whenever I return from a trip, I am refreshed, energised and inspired to create. Taking time off is a newer luxury for me, I am entering a phase of my life where I can let go a little bit more. Music and art also play a huge role in my life and many of my collections tie to a certain genre of sound or artist’s oeuvre.”

His penchant for art (among Lim’s collection are works by Cy Twombly and Ellsworth Kelly) and design extends from his home to a new concept store in Los Angeles Arts District. Opened earlier in May, Architectural Digest calls the chic space “a design mecca”. The space, previously a warehouse, spans over 450 sqm and has an “industrial yet airy” feel to it. The white walls, and intendedly cluttered clothing racks, give the space its arty edge. MR Architecture + Décor and retail designer Kate McCollough helped Lim realise his vision for the space. “The inspiration for the store was simple pleasures,” the designer says.

“Conceptually, we wanted to create the simple pleasures of home in a retail environment; a place where conversation could happen over unique, compelling objects.” Besides Lim’s designs, the store sells home and décor products, including lighting by Apparatus and furniture from Patrick Parrish Gallery. “We created modular spaces where the 3.1 Phillip Lim collection is presented alongside a curated selection of product from other like-minded artists and creators: individuals whose work I admire and have come to call friends,” says Lim, whose first store was also in the same neighbourhood. “My goal for the store was really to slow it down for a second and create a place of community in the sprawling, hectic metropolis that is Los Angeles. Fashion is all about what’s new, what’s next; it is always looking ahead. But in this space, you have the freedom to just breathe and enjoy the moment, to appreciate a beautiful thing simply for its beauty.”

While his designs are continuously celebrated, and his business thriving, a lesson that Lim has learned in his years as a designer lies beyond the clothing racks. “I’ve learned that there is a whole world happening outside of the fashion industry, and you have to keep paying attention, keep speaking up, keep questioning and challenging.” His ideal America? “One where we recognise and acknowledge our similarities, and celebrate and rejoice in our differences.”