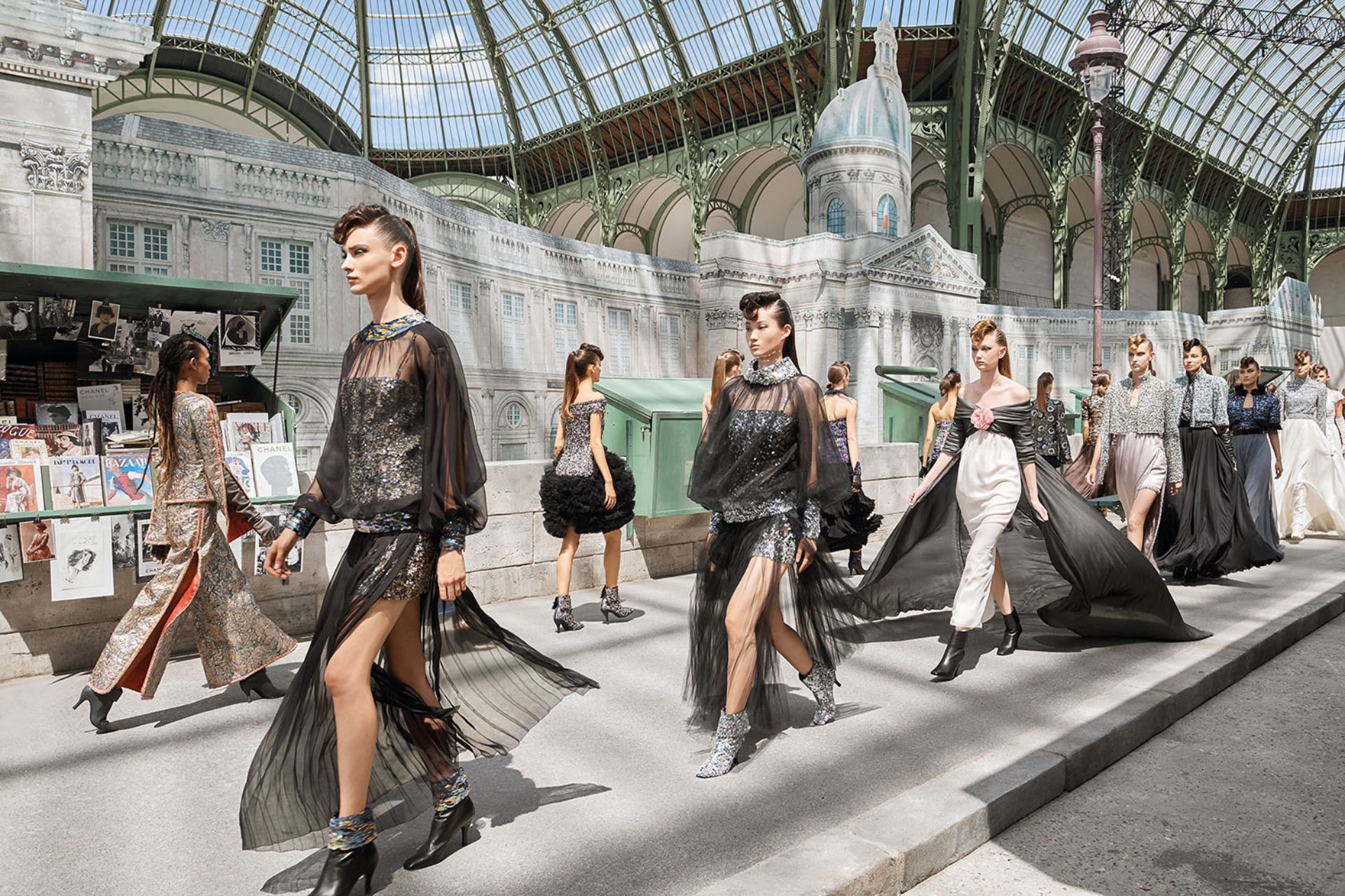 Post-war Paris was a dreary picture of dirty streets, and dark and derelict buildings when Karl Lagerfeld arrived at the age of 18. That did not stop the German teenager from falling in love with the city, which he paid homage to in this ode of a collection that reaffirmed Paris as the capital of haute couture.

He built his new concept around what he called “High Profile”, composed of a slender silhouette with defined shoulders and slits that are actually an open zip trimmed with braid. Slashing profiles of sleeves and skirts, it gave audiences a sneak peek at long colourful fingerless gloves, embellished miniskirts and contrasting linings.

While the collection was enriched with sequins, beads and crystals, there was lightness and delicacy from tulle and chiffon that swirled so ethereally as models wafted by.

In the Grand Palais, Lagerfeld’s ode to Paris saw a recreation of the promenades by the Seine, complete
with iconic green open-air stalls brimming with magazines, books, photographs of founder Gabrielle “Coco” Chanel.

Italian model and face of Chanel Beauty Vittoria Ceretti strode along the Seine in a sombre grey suit that Lagerfeld made edgy by slicing the sleeves open to reveal his signature fingerless gloves. Likewise, the skirt had a thigh-high slit, flaunting Ceretti’s long legs and booties with folded cuffs.

Sam McKnight gave the gamines sassy coifs with the addition of rockabilly-worthy forelocks to swingy ponytails.

The legendary Maison Lesage showcased its savoir faire on this look, finished with black lambskin booties made by revered bootmaker Maison Massaro.

01 Starting in the Chanel ateliers, the sketch was interpreted as a pattern on ecru cotton toile. During this initial phase of pattern to mannequin, the première rendered the silhouette of the sketch into a 3D toile by following Lagerfeld’s indications, including the positions of future embroideries marked out. The fit model tried it on, and upon Lagerfeld’s approval, reproduced in the actual fabric, which in this case was grey tweed.

02 Based on Lagerfeld’s validated embroidery sample, 226,000 sequins and tubes were embroidered on silk tulle using a Luneville crochet hook at Lesage. This technique embroidered the underside of the fabric on an embroidery frame. One hand held the hook; the other moved the elements forward beneath the frame.

03 Once the silk tulle was covered with sequins and tubes, it was enhanced with strands of angora wool. The embroidery work of this jacket took 986 hours.

04 The embroidered pieces were returned to Chanel ateliers for seamstresses to start assembling the zip-up jacket. The braid was positioned according to the length of the zip on the skirt as well as the underskirt. This became the High Profile silhouette. “You can open the skirt, and the leg is more beautiful in profile, it makes an endless leg,” Lagerfeld pointed out.

Lagerfeld tapped on the talents of Maison Michel for this look comprising zip-up coat, dress and boots embellished with organza petals. The milliner also created the black velvet fascinator, accentuated with feathers by Maison Lemarié, and lambskin boots made by Maison Massaro.

01 The first phase kicked off in the Chanel ateliers, where the sketch was interpreted as a pattern on ecru cotton toile. The première then rendered the silhouette of the sketch, with the positions of future braids marked out, into a 3D toile. With Lagerfeld’s go-ahead, it was reproduced in the actual fabric. Here, it was black chiffon.

02 Upon Lagerfeld’s validation, the sample was sent to Lemarié, where 12,000 organza petals assembled with 11,000 tiny beads were sewn onto the silk chiffon.

03 It took Lemarié 450 hours of work to adorn the collar and cuffs of the coat with the organza petals, and make the braid for the coat, dress and booties.

04 Back in Chanel ateliers, the completed collar, cuffs and braid were positioned onto the black chiffon coat and dress.

This time, the maverick took a break from traditional white to go green. Exquisite embroidery in the shape of leaves (like those worn by members of the French Academy) embellished the tweed redingote-effect jacket and booties, giving the mint hue a zingy lift. What also made this exceptional was Sudanese-Australian Adut Akech, who became Chanel’s second couture bride of colour, following Alek Wek in 2004. With the sun blazing through Grand Palais’ glass domes, this season’s bride made for a refreshing dose of change.