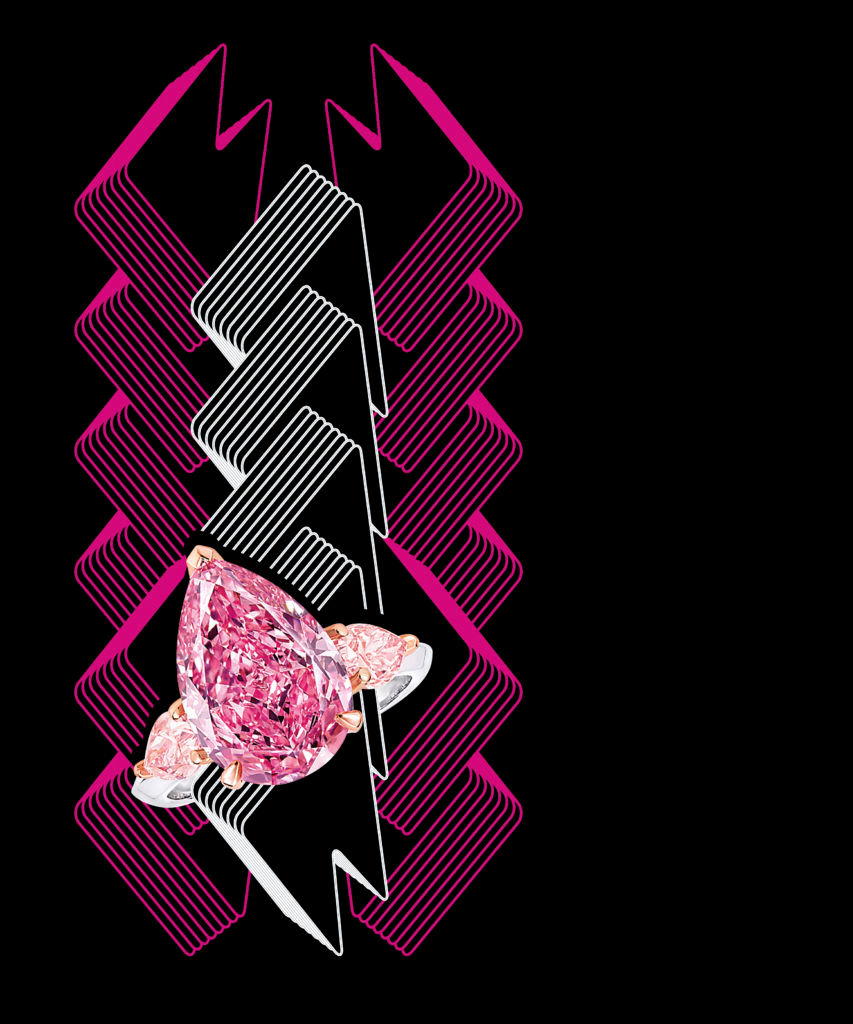 The strongest naturally occurring substance on earth, diamonds were first referenced in Sanskrit texts as early as 400BC. Coloured diamonds, however, are extremely rare with only one natural coloured stone found for every 10,000 colourless diamonds. Factors that determine a coloured diamond’s value include hue, tone and saturation. Microscopic amounts of trace elements and distortions, pressure or carbon atoms interacting with an element can effect a colour change in diamonds. For instance, the presence of hydrogen creates pink, purple and red diamonds, while boron absorption results in blue diamonds. The mines where these rarities are discovered are quickly becoming depleted, making them even more heart-stoppingly expensive.
This Graff white and rose gold set ring flaunts a 5.63-carat pear-shaped fancy vivid purplish pink diamond, which is flanked by two fancy intense pink pear-shaped diamonds. Cut and polished from an extremely rare 13.33-carat pink rough diamond discovered at the renowned Letseng mine in Lesotho, it was purchased by Laurence Graff for over US$8.7 million, breaking the record dollar per carat price of any Letseng diamond. 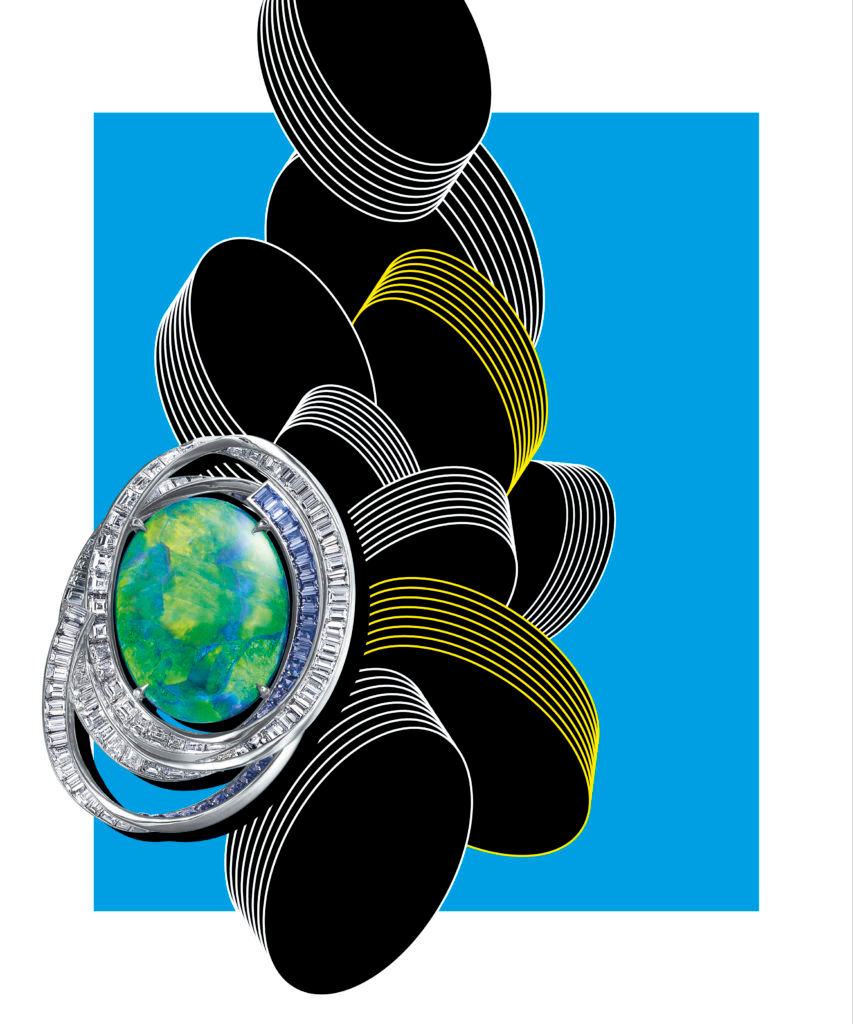 This glittering “black” gem with a holographic effect sets itself apart from the other types of opals, thanks to carbon and iron oxide traces. Its unusually dark body tone also allows the rainbow-like hues to radiate more vividly than in lighter opals. Australia produces over 90 per cent of the world’s opals, with Lightning Ridge being the most prestigious and frequently featured in high jewellery for its rare black opals. They are so much harder to find now that an exceptional gem-quality specimen can fetch up to A$15,000 (S$14,550) per carat. The scarcity of this delicate mineral (its hardness is 5.5 to 6.5 on the Mohs scale) is further compounded by high fuel prices and lease fees that make mining very costly.
A ribbon motif highlights Tiffany & Co.’s unparalleled level of craftsmanship in this remarkable platinum-set brooch. Showcasing an oval cabochon black opal of over 37 carats with baguette sapphires and diamonds totalling more than 23 carats, this piece’s clean and organic aesthetics belie its complexity of craftsmanship. 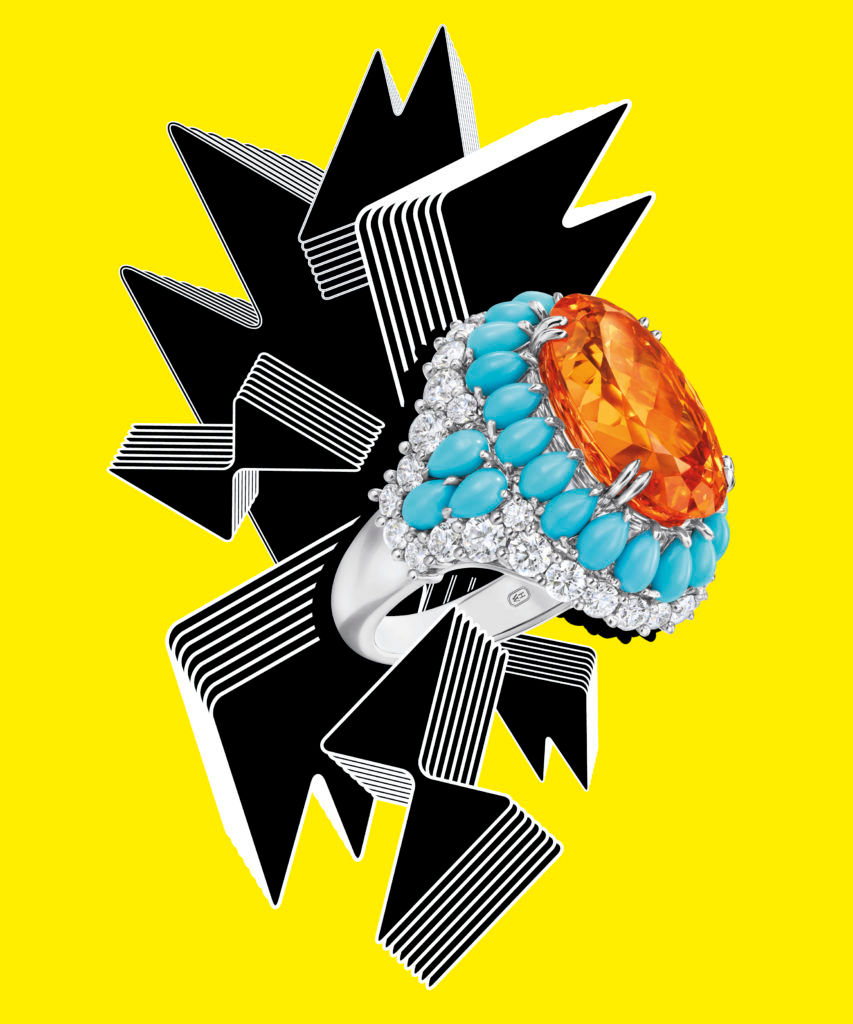 Although most spessartites originate from Africa today, the vivid orange or reddish orange mineral got its name from Spessart, Bavaria, in Germany where it was first discovered. One of the rarer garnets, it is an idiochromatic gem, which means it is coloured by a fundamental element – manganese in this instance – in its composition rather than impurities. Combining a hardness of 6.5 to 7.5 on the Mohs scale with excellent brilliance and sparkle, the gem is attractive to collectors as it is almost always completely natural and untreated. Since large, top-grade garnets are no longer found in mines today, one with a saturated pure mandarin orange hue is the rarest and most valuable.
This spectacular Harry Winston ring from the Winston Candy collection features a 16.69-carat oval spessartite garnet in a vivid mandarin, which is set on platinum in bold contrast with pear-shaped turquoise cabochons and scintillating round diamonds. The most sought after and valuable natural topaz, this gem’s name originated in 19th-century Russia to honour the czar, as the Ural Mountain mines were a leading source of the stone. Like the colours of the setting sun, imperial topaz is defined to include yellow, red, pink, lavender-pink or pink- orange, with the natural pink variety being very rare. While orange, pink and red topaz now come mainly from Ouro Prêto in Brazil, fine pink topaz also hails from Pakistan’s Katlang area. It has a hardness of 8 on the Mohs scale, and is also highly prized for its brilliance and glassy lustre with few inclusions.
From Cartier’s High Jewellery collection Magnitude, the enthralling Mauna necklace showcases three bicoloured Brazilian imperial topazes –two octagonal and one pear-shaped with an ombré effect – weighing a total of 21.91 carats. Accompanied by diamonds, sapphires and rutilated quartz, the striking colours and design cascade like lava flowing from volcano. 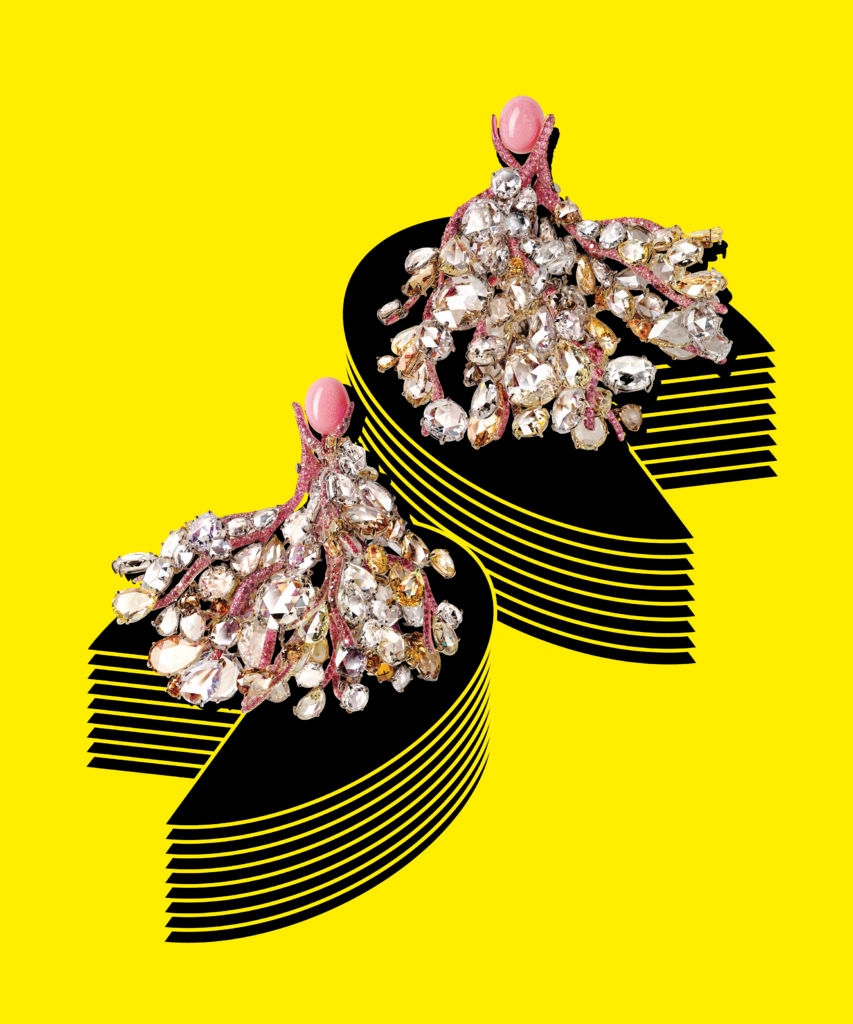 Beloved for their pretty hues, which range from white to pink to golden, conch pearls are among the rarest and priciest pearl types in the world. A calcareous concretion produced by the queen conch mollusc, the pearls most often used in high jewellery are pink and oval-shaped. The finest specimens also bear a flame-like motif and a smooth porcelain surface. About 10,000 conches must be harvested before a single pearl can be found, with less than 10 per cent considered gem quality.
The 2020 Black Label Masterpiece V Cameron Falls Earrings from Cindy Chao’s Aquatic Collection are inspired by Canada’s Cameron Falls, which is renowned for its pink hue in the rainy spring/summer season due to the region’s similarly coloured sedimentary rocks. The main highlights of this sculptural creation – a pair of natural conch pearls totalling 10.24 carats – are accentuated by lavish streams of pink sapphires and purple garnets set on anodised titanium. The movement of water is depicted by white diamonds and fancy-coloured rose-cut diamonds. 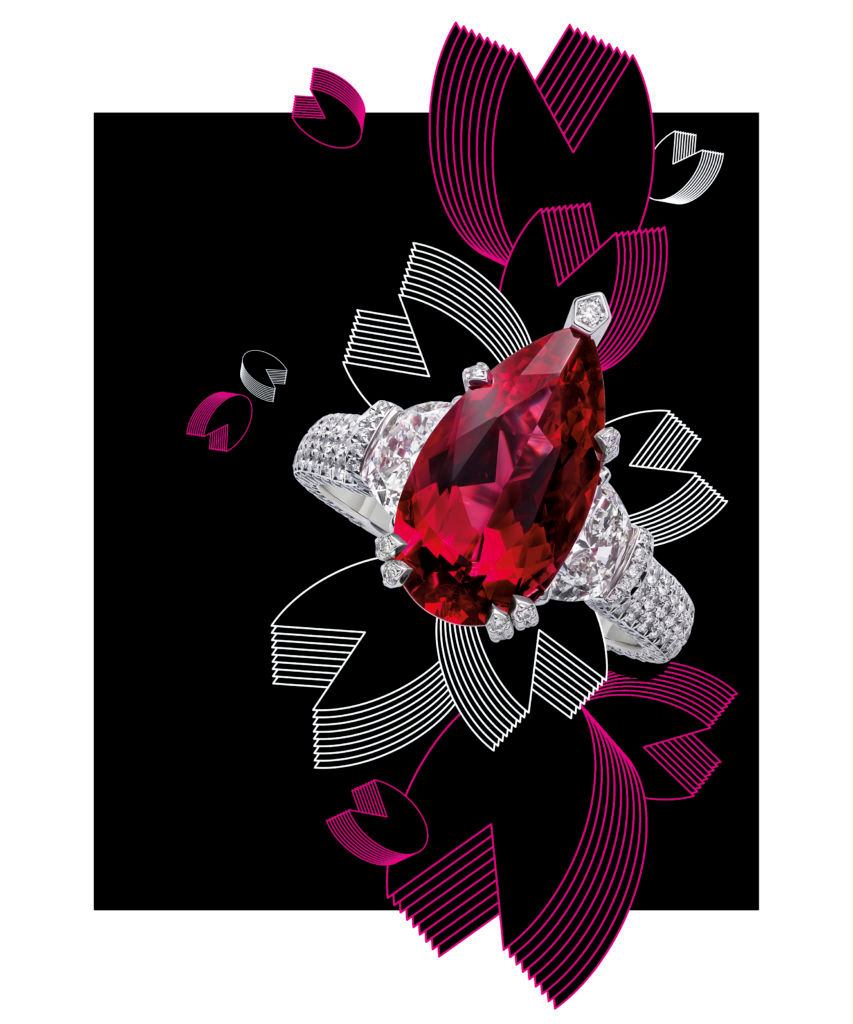 This gemstone comes in a rainbow spectrum of colours that range from intense red and hot pink, to shades of blue and purple, and even grey and black. The most precious hues are ruby red from the famed Mogok Valley in Myanmar and cobalt blue from Vietnam’s Luc Yen mine. Spinel has a hardness of 8 on the Mohs scale, and a signature property of the gem is that it is singly refractive. Light enters the crystal and only bends in one beam, resulting in it being more brilliant than rubies or sapphires.
Gracing this ring set in ethical 18k white gold from Chopard’s Red Carpet Collection 2020 is a 4.7-carat pear-shaped spinel, two half-moon diamonds and brilliants. Its crimson hue is so vivid that it is little wonder that red spinels have been long mistaken for rubies until modern-day technological advancements in gemology could differentiate the two. 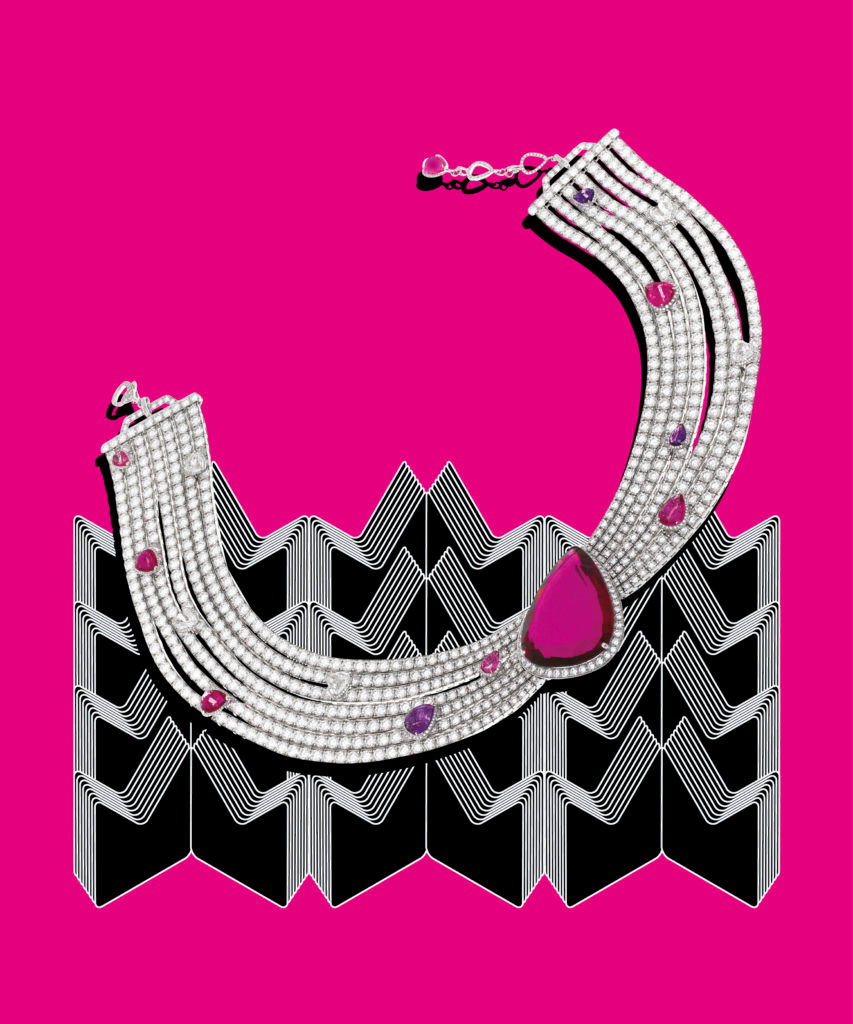 Highly prized and priced because of its rarity and vibrant beauty, the rubellite hails from the colourful tourmaline family. With its name derived from the Latin word rubellus, which means reddish, it features trace amounts of manganese that gives it its colour, which varies from luscious red to violet to dramatic pink. This is one of the few gemstones where the presence of inclusions is a benefit. Mainly found in Brazil, Madagascar, Mozambique, Nigeria and Pakistan, a genuine rubellite must hold its colour regardless of the light source.
A drop-cut 66.41-carat rubellite with outstanding transparency and intense colour steals the limelight on the Meraviglia collar from Bvlgari’s Cinemagia high jewellery collection. Set in 18k white gold, it also features 10 pear-shaped pink tourmalines and amethysts totalling 9.88 carats, five pear-shaped rose-cut diamonds of 5.12 carats, and 116.93 carats of dazzling diamonds knitted into a sensual, flexible and precious piece of lace. 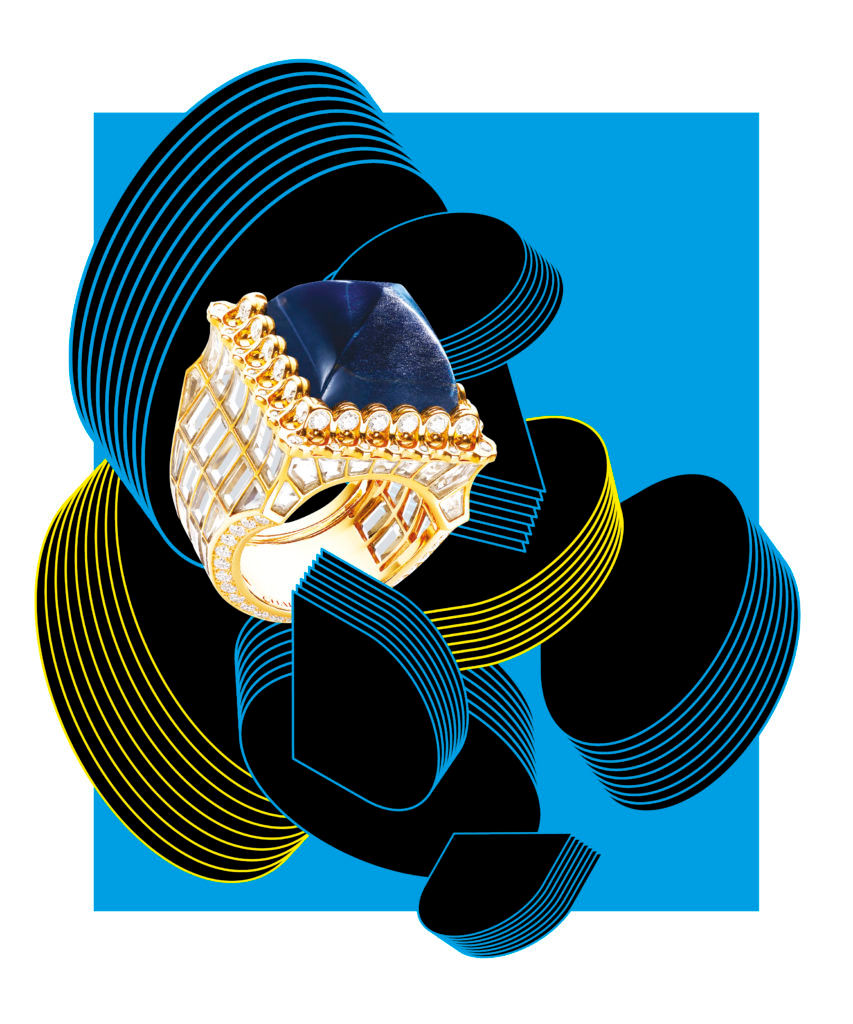 Famed for its chatoyancy (the optical effect of a reflective band of light), this gemstone is a pseudomorph of quartz – a mineral that is replaced by another over time while retaining its external shape. Hawk’s eye is essentially an unoxidised form of tiger’s eye. Its formation begins when blue crocidolite is dissolved by quartz and traces of iron oxide remain. Less iron results in the blue hue of hawk’s eye, while more iron gives it the brownish gold colour of tiger’s eye. With a hardness of 7 on the Mohs scale, the colour of the opaque gemstone with a silky lustre ranges from blue-grey to blue-green.
From Chaumet’s collection of Trésors d’Ailleurs High Jewellery rings, a deep blue sugarloaf hawk’s eye takes centre stage on the Artemisia ring. Set in 18k yellow gold with rock crystal and brilliant-cut diamonds, the regal piece combines a sense of monumental splendour with intricate details.