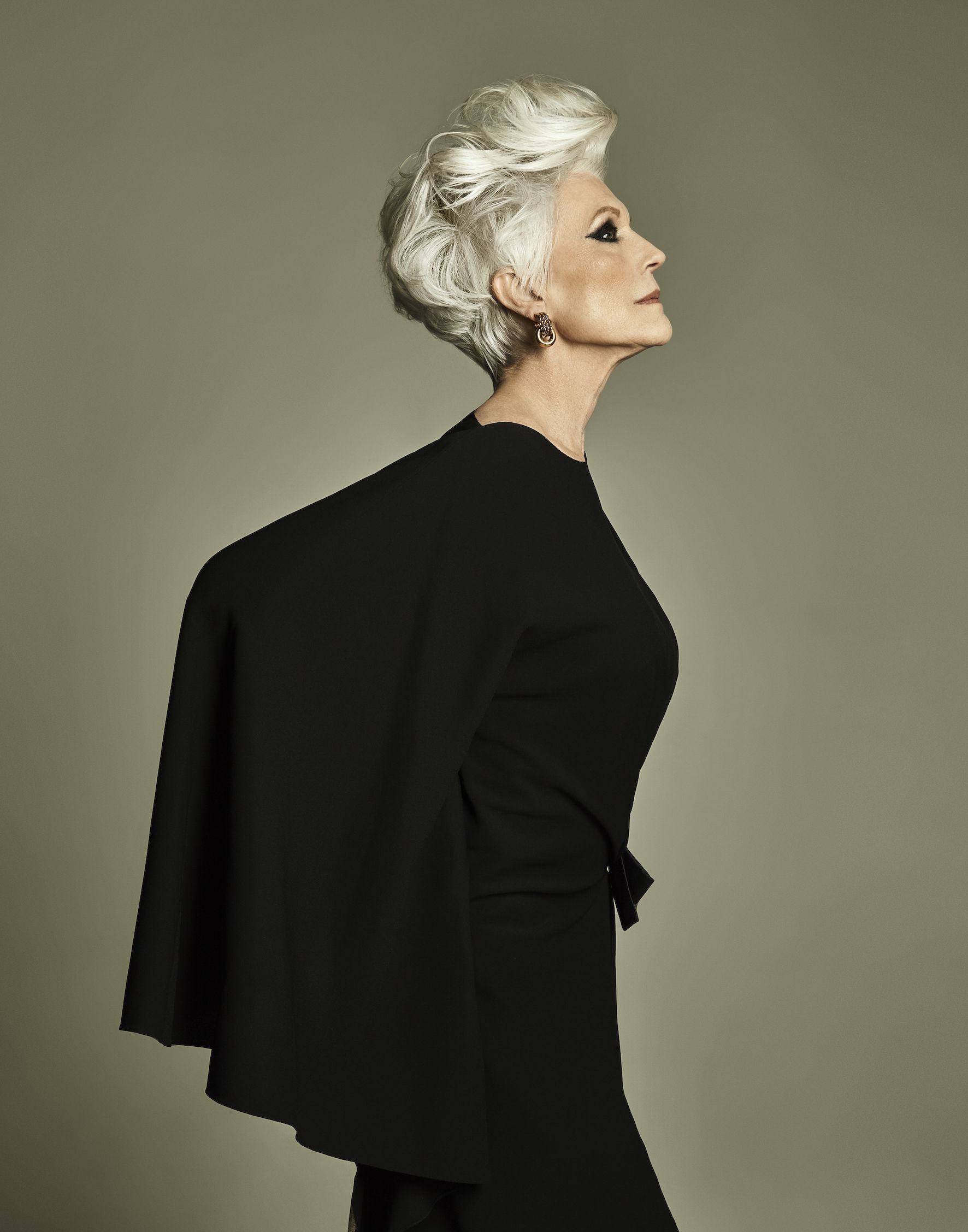 Maye Musk turns 70 this April. This may not seem significant – after all, she’s not the first woman to hit 7-0. But for Musk, this milestone is worth extra attention because last year, at 69 years evergreen, she was made a face of CoverGirl – the oldest in the cosmetics brand’s history.

Musk has been in front of the camera since she was 15, but her modelling career really kicked off around 10 years ago as she approached her sixties, when she decided to stop colouring her hair and chop it short. “As a teenager, I had mousy brown hair and I started colouring it blonde,” Musk says. “Suddenly I was a blonde model and to keep it going I had to do my roots every four weeks. Then, when I was coming to my sixties I decided: I’m tired of colouring my hair – and, you know, I was still mainly a dietician more than a model – so I’m going to grow my hair out. But my best friend Julie told me to chop it all off, so I did.

“My then model agency said to me, ‘You’ll never model again.’ And for six months they wouldn’t send me out. I went up there and sat in their office and said, ‘You will let me out of my contract.’ but they refused and said I had another three years. So I went to their boss, who let me out, and I just went to a different, smaller agency and the next thing you know, in a few months, I had a billboard in Times Square, a billboard in Madison Square Garden. I had editorial work, which I hadn’t been considered for in so long and then I suddenly became this edgy white-haired model. Who knew?”

Musk’s success comes as a surprise to no-one more than her. Never expecting to be the poster woman for older ladies who are doing it for themselves, she’s ecstatic to see where her new role with the iconic make-up giant is taking her. “When I post anything about CoverGirl or being 69 years old,” she says, “all I get is a great response. No one says, ‘What’s an old lady doing this for?’. Young women, old women and even men are telling me that I represent them and their goals – that I inspire them and that we can carry on forever.

“The thing is, I think this is the future, because women are of all ages. They’re not all 18 years old, size zero. They can be any age. It gives hope, I think, to all women that they can age and look good and feel good about themselves. To just continue to have confidence. And I hope that my being there will let them know all this because you can go through really hard times in your life.”

Was age ever one of those hardships? Musk responds with a resounding no. “As you get older,” she says, “you need to accept the fact that sometimes you have to portray a person older than you are. I’m quite happy with that. I’m happy they still wanted me and then at 42, when I was in Toronto, they wanted me as a grandmother for a front cover. I said, ‘Sure, I’ll do that!’”

In an era where men and women are equally obsessed with fighting against ageing and products are plugged as the elixir of youth, Musk has her mother to thank for so easily evading the neurosis. “My mum had no fear of ageing. She never spoke about it and she worked until she was about 96. She was an artist. She exhibited until she was about 94 because she then became a little shaky and then taught herself computer art until 96 – and then she gave up after that. She never felt age at all.”

Thus, for Musk, retirement is, almost laughably, out of the picture. Aside from being anointed by CoverGirl, Musk has bookings weeks in advance. And with recent assignments in Kiev, Dubai, Paris, Milan, and Toronto, her modelling career has just had, in her opinion, its best year yet. And even if all of it were to halt tomorrow, she can still continue her dietician practice. “As a dietician,” Musk says. “I never have to retire. As long as my brain is working, I can work as a dietician. I can give advice, travel the world as a speaker. I have no fear of getting old as a dietician.”

It all seems exceptional – an educated model with a dietetics practice, children, now 10 grandchildren – but for Musk, exceptionalism is all in the family. Her father’s motto was: “Live dangerously, carefully.” She’s bookended by explorers. In the 1950s, her parents packed themselves, their four children, their belongings and their aircraft on to a cargo ship to Cape Town in South Africa. Upon arrival, Musk’s father reassembled his plane, packed everyone and everything inside and flew around the land until the landscape of Pretoria captured their hearts and the family settled there.

“The reason they moved was so they could explore Africa,” Musk tells me. “They did the Cape Town to Algiers Rally and were co-winners of that. They navigated through Africa with a map and a station wagon. They also took us to the Kalahari Desert. We’d go for three weeks across the desert, with three weeks’ supply of water, petrol and food. With a compass course, we’d go across the desert looking for the Lost City.”

“They were the only people in the world to fly from South Africa to Australia in a single-engine plane and were welcomed everywhere they went. That’s very adventurous. And terrifying. I mean, I wouldn’t do it.”

With her then-husband, Musk also gave birth to three children – Elon, Kimbal and Tosca. The first among them, Elon, is best known as the CEO and product architect of Tesla. He’s also the founder of Space Exploration Technologies (Space X), which is primarily a private producer of rocket engines with secondary hopes of establishing a colony on Mars by 2040. Her second child, Kimbal, is a restaurateur, and her youngest, Tosca, is a filmmaker, who recently launched Passionflix, an alternative online movie platform that serves as an antidote to today’s violence and gore. Musk is nothing if not a champion of her children, listing their accolades whenever any of them is mentioned.

Hers seems like a charmed life. From being led into her mother’s friend’s modelling school at 15, the self-professed science nerd balanced modelling on weekends and holidays with graduating from high school, then university, and then achieving two Masters degrees. She went on to establish herself as a dietician in eight different cities, all while raising intelligent, highly respected children – one of whom who will go down in history as one of his generation’s pre-eminent figures in science and technology – before she became the face of the fight for age diversity in the fashion and beauty industry. It reads as a modern fairy tale.

But Musk doesn’t want us to think that it’s all been easy, because it hasn’t. At first, it’s hard to see how life has treated her unkindly. Not naturally slim, her unhappiness arising from divorce in the ’80s led her to gain 40 pounds, taking her from a size 6 to a size 12. What did she do? Ride the plus-size-model tide that took the ’80s catwalks by storm. A look at the modelling portfolio on her website shows that, even overweight, she made the cover of The New York Times Sunday Magazine as an aged Marilyn Monroe. Weight gain from personal misery might be relatable but we don’t all get modelling contracts from it.

Musk is adamant, “Anyone who knows me would never envy the life that I’ve had,” she says. “There were so many hard things I went through, but I don’t talk about them because then I become angry. I don’t think it’s fair I should have been through such hard times, but other women have been through worse, and as soon as you start talking about your miserable life you become miserable and upset, so there’s no point in talking about that.

“So for people who envy me now, I envy me now! I can’t believe how good life is, but it took me till now to say I have a great life.”

She dismisses my rejoinder that, to me, she has a perfect life with a perfect waist as fast as I have the audacity to utter it. There’s a tone of veracity that comes from lived experience as she responds: “In hard times your inner voice says, I’ve got to get out of this situation, be it people – or work – or relationship-related,” she says. “You have to figure out a way to get out of that situation if you’re absolutely miserable – even if you end up being very poor.

“A struggle health-wise is a struggle,” she says, “but financially, you just have to cut back. These days, I can actually go out for drinks or a dinner with a friend and I don’t have to say I cannot afford a drink, I can only afford an appetiser. I don’t have to say that any more, but I still remember those days. Or what I used to say to people was that I can’t come out for dinner, but why don’t you come here and I can make us bolognese and salad. They all know I’m a bad cook, so then they’d offer to bring food and I’d get a bottle of wine.”

Musk’s modelling career is different from the days when she saw it as a crucial source of additional income. She has time to enjoy herself. It’s also simply easier now than when she first started in the industry. “There was a lot of choreography that you had to practise and rehearse, because you had to turn around, take your position, pose, look this way, go with three people here” she says.

“I had notes about my clothing, my entrance, and I would practice at night on my own before the show. Now, I just have to walk straight. It’s the easiest thing ever. I just walk straight and look ahead. Although you can’t look anywhere else because you’re blinded – the cameras and lights are on you. And people do your hair and make-up, and you wear one or two outfits instead of six.”

More than that, though, is that Musk can now indulge in the sheer pleasure of modelling and the creative process it entails, something which audibly delights her. “I love it when professional people work on me,” she says. “And do something outrageous and outstanding, fabulous and glamorous. It’s so fun to pull that off. I get a lot of pleasure from modelling, but I also get pleasure from creative people using their talents on me. I just love it – especially when they ask me how I like my make-up done. I just say, ‘However you want to do it!’ They love that.

“That’s the thing – I have a team looking after me and making me look incredible. I do need a team to make me look super stylish. Otherwise I’m quite a plain-looking woman just wearing my jeans and T-shirt and walking my dog. But I think my parents were adventurous and I’m adventurous. So it’s fun.”