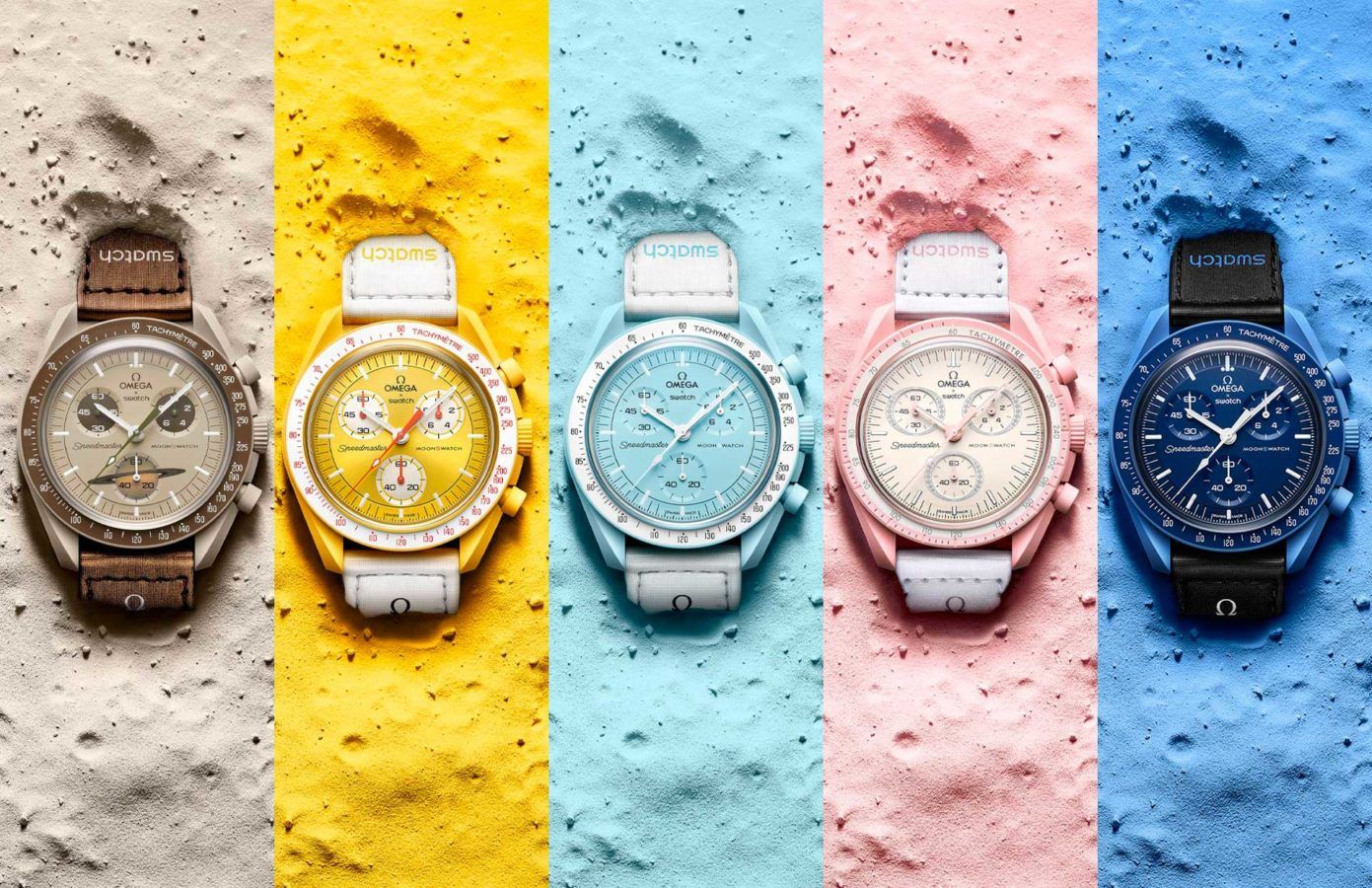 Omega and Swatch, two of the biggest watchmakers joined hands for a mission — Omega x Swatch BIOCERAMIC MoonSwatch. This joint venture has led to extremely high demand worldwide with long queues forming outside stores when it was officially released.

Although it may be sold out in stores, you can still buy them online. There are 11 different watches in the collection, each named as a “mission” to the celestial bodies in our solar system — from the Sun to Pluto. All the watches are based on the iconic Omega Speedmaster Moonwatch, which is renowned for being worn by NASA astronauts on each of the organisation’s piloted missions, including all six moon landings.

Swatch, on the other hand, has given its quintessential playful touch to the Speedmaster. The Omega X Swatch collection, thus, marries classic aristocracy with trendy colours. This is the first-ever collaboration between the two brands.

Additionally, the price range of the watches is such that many can afford them — one of the major reasons the collection is so in-demand.

What to know about the Omega X Swatch MoonSwatch collection

What’s the reason for the hype behind the Omega X Swatch collaboration?

Omega and Swatch — two giants of the Swiss watch industry and major names among the world’s most famous watchmakers.

Each brand has its respective fan following around the world, many of whom have been loyal for decades. Their fans come from different worlds with regard to taste and style.

So, the Omega X Swatch MoonSwatch collection brings together two massive fan bases onto a common platform. Additionally, affordable pricing makes the watches even more lucrative. This explains the crowds outside the stores across Singapore, Hong Kong, London and New York City on the day the collection dropped.

What are the features and specifications of MoonSwatch?

Instead of having mechanical movements, the Omega X Swatch collection comprises quartz watches. Each of them comes in Swatch’s Bioceramic case as opposed to Omega’s classic stainless steel case, and the innovative material is reportedly made from two-thirds ceramic and one-third castor oil.

It is not a copy of the iconic Speedmaster, but part of the design is inspired by the Omega Moonwatch collection, which is evident in the subdials, tachymeter scale and contours.

All watches bear the Omega X Swatch signature at the 12 o’clock position. Both “Speedmaster” and “MoonSwatch” are marked in between the subdials.

Some watches have special add-ons to their dials. For instance, the Mission to Saturn piece from the Omega X Swatch line has the rings of Saturn encircling the subdial at the 6 o’clock position and the Mission to Mars MoonSwatch has the red rocket hands of Omega Speedmaster Alaska Project watches on its subdials.

Each watch features a depiction of its respective planet or celestial body and inspiring words on the battery cover on the back. All of them come with velcro watch straps, which are used by astronauts to wear watches over their spacesuits.

Is the MoonSwatch a limited collection?

Following the frenzy around the Omega Speedmaster Moonwatch collaboration, Swatch released a statement, saying that the watches will be limited to one per person until further notice.

This indicates that the MoonSwatch isn’t a limited-edition collection. More is expected to be revealed in due course of time. So, fans of the Speedmaster can hope to lay their hands on their favourite out of the 11 colourways.

Why is it called a Swatch?

The Omega brand, which was founded in 1848, is part of the Swatch Group. Even though both brands share their names on the collection, the watch is being marketed as a Swatch watch.

Swatch has been in the horology business since the early 1980s. It was created to counter the quartz digital watches created in Japan, which were cheaper than the classic Swiss watches and were taking over the global market at the time. The first Swatch watch was released in 1983 and the brand soon became a hit.

One of the major reasons behind the success of Swatch lies in the design of their watches. They come in bright colours and almost look like plastic watches kidswear. However, this very trait turned Swatch into a fashion symbol. The funkiness of the watches matched the trendy styles in dressing, giving wearers options to highlight their personal styles.

The 11 colours of the Omega X Swatch collection are, therefore, a nod to Swatch’s history of producing cool and colourful timepieces.

How to purchase Omega X Swatch watches at stores?

It is going to be a difficult task for anyone trying to buy an Omega X Swatch watch in the select Swatch stores. Long queues have been seen since the day of the release outside stores around the world.

The demand for the Omega X Swatch watches in Singapore is so high that hundreds were seen waiting outside the Swatch store in Ion Orchard at Marina Bay Sands (MBS) in the early hours of 26 March. There was a lot of commotion witnessed at the store.

Chaotic scenes were also seen at Dubai’s Mall of the Emirates. Meanwhile, stores ran out of watches in megacities such as Kuala Lumpur and malls in Pennsylvania, US.

Though Swatch said that it will release more pieces in the Omega Speedmaster Moonwatch collaboration in the future, crowds will probably continue to throng Swatch stores the watches were unveiled at.

The best way to look for a store near you is to head to the official Swatch website and click on the ‘Find a Store’ option at the top right corner of the page.

Where can you buy Omega X Swatch online?

Not everyone likes to stand in a queue and wait for hours when there is no guarantee of being able to buy the watch. So, what’s the other option? Online, of course!

There are several ways to buy an Omega X Swatch watch online. But all of them, it appears, are re-sales by those who have bought the watches. This is because Swatch itself isn’t selling the MoonSwatch online on its official site, where each watch is listed at RM1,065.

At StockX, the watches are going for as low as US$878 asking price a piece.

Buyers can also bid on eBay, where the Mission to Uranus has drawn a bid worth US$655 at the time of writing. Other variants of the MoonSwatch are drawing even higher bids. The Mission to Mars, one of the most prized from the collection, drew a bid of US$1,134.

On Carousell, some of the watches are selling for RM3,000.

The watches are also on sale at Chrono24 in Malaysia. The price range on the site varies greatly. While a professional dealer in the US is offering the Mission to Uranus version for RM11,200, Malaysian sellers are offering other variants for RM4,000.

As stated before, there are 11 colours to choose from in the bioceramic MoonSwatch collection. Those who like cool, funky looks can opt for the more vibrant ones from the collection such as the bright yellow Mission to the Sun or the red-and-white Mission to Mars. The Mission on Earth, which has an earthy green colour, and the light pink Mission to Venus watches are among those that will appeal to lovers of softer shades.

Mission to the Moon, which follows the exact design and dimensions of the Omega Speedmaster Moonwatch, has a black dial and looks more classic in design. The beige-coloured Mission to Saturn and the grey-and-burgundy Mission to Pluto have a degree of aristocracy to them.

What do customer reviews say?

Long queues outside stores are evidence enough of the hype around the watch collection. That the demand for the watches is very high days after their launch is testimony to their popularity.

Why wouldn’t anyone want to buy an Omega X Swatch, a merger of luxury and street brands, which gives a slice of the best of both worlds?

Is the Omega X Swatch collaboration worth the hype?

This is a one-of-a-kind collection for the watch community, and both Omega and Swatch are individually considered icons in the business. Their respective collections, though catering to diametrically different demographics, are renowned among their fans. Many of their products are collectables in their own right.

The Omega x Swatch collaboration is, therefore, a must-have for fans of both Omega and Swatch. Thanks to the colourful style that Swatch is known for, traditional Omega watch fans get a unique range of diverse colours in an Omega Speedmaster Moonwatch iteration. On the other hand, Swatch wearers get their hands on a watch bearing the Omega brand name at a relatively affordable price range.

Are there any upcoming watch collaborations to look out for?

For now, it looks like the Omega X Swatch collection will be the talk of the watch world. It is unclear if any other collaboration is coming up.