In Part 1 of Cachet’s 2021 feature story, we take a look at luxury watch brands driving change towards sustainability, conservation, and humanitarian efforts to make the world a better place – featuring Rolex, Cartier, Chopard and Omega.

These are areas designated as vital to the preservation of species. The sites may be significant for their biodiversity, home to rare or endangered species, or be sites where local communities rely on a healthy marine environment for their livelihoods.

With the support of Rolex since 2014, the number of Hope Spots has increased from 50 to over 130. Earle contributes to a global effort aiming to protect 30% of the world’s oceans by 2030. Presently, only 8% of our oceans are conserved. Since 2017, Rolex has also enhanced its long-standing partnership with the National Geographic Society to promote exploration and conservation. The two organisations unite in engaging in a series of expeditions focused on answering crucial questions about the impacts of climate change on critical environments.

In early 2021, a National Geographic team of explorers and scientists installed a weather station just below the summit of Tupungato Volcano in the Southern Andes. The highest weather station in the Southern and Western hemispheres, scientists now have a window to observe atmospheric processes in the Chilean Andes. One of the most globally vulnerable water sources, these mountains provide critical freshwater to more than 6 million inhabitants in nearby Santiago.

The Rolex Awards for Enterprise is another effort beneath the Perpetual Planet initiative’s umbrella. First set up in 1976 to mark the 50th anniversary of the world’s first waterproof wristwatch, the Oyster, the programme supports exceptional individuals making the world a better place.

To date, 150 Laureates have seen their labour come to fruition. Their efforts benefit an estimated 5 million people globally, with 48 innovative technologies developed for numerous applications. Thanks to them, over 18 million trees grow today. Additionally, 34 endangered species and 26 vital ecosystems, including a large expanse of the Amazon rainforest, are now protected.

The vision and values of Hans Wilsdorf endure as the company turns its passion of exploration for pure discovery into a passion for preserving the natural world. Rolex’s commitment to supporting explorers on this mission is a noble quest with no end in sight, enabling change for a better tomorrow.

The Cartier Women’s Initiative (CWI) is an annual international entrepreneurship programme that aims to effect change by empowering women impact entrepreneurs. The initiative equips these entrepreneurs with the financial, social, and human capital required to build their leadership skills and grow their businesses.

Since its inception in 2006, the programme has embraced women-owned businesses internationally for as long as they aim to have a significant and sustainable social or environmental impact. Cartier has received over 20,000 applications in the last 15 years. The international luxury maison has supported promising female entrepreneurs from 56 nations, awarding over 3 million USD to support their efforts.

Each year, the Regional Awards recognises women from every corner of the globe, including Latin America and the Caribbean, North America, Europe, Sub-Saharan Africa, Middle and North Africa, East Asia, South Asia, and Oceania. In less than a decade, the Cartier Awards has grown from attracting 360 to 1200 applications per year.

From 2021, the Cartier Women’s Initiative also introduces the Science & Technology Pioneer Award, gearing up for more world-changing efforts. In addition to the seven existing regional awards, three more women at the forefront of scientific and technological innovation will have the opportunity to gain funds and recognition for this new thematic award. Open to all women entrepreneurs, this award gears to highlight disruptive solutions centred around unique, protected, or hard-to-reproduce technological or scientific advances.

This year, eight women entrepreneurs earned support for launching start-up businesses that drive change and growth within their communities and beyond. An independent international jury committee chose the laureates from 876 applicants from over 142 countries. Each of the eight laureates received USD 100,000 in funds. An additional 16 finalists, second and third runner-up for each region, receive USD 30,000 for their efforts.

Since 2013, Chopard has been on a Journey to Sustainable Luxury thanks to the initiative launched by Co-president and artistic director of Chopard, Caroline Scheufele. This desire to protect the natural world extends from its stunning jewellery to its horological masterpieces, as demonstrated by the Alpine Eagle sports chic timepiece collection.

Designed by co-president of Chopard, Karl-Friedrich Scheufele, he is committed to the conservation and protection of the Alpine environment, especially of the eagles that reign supreme there. The majestic wildlife and Alpine terrain surrounding the Manufacture have also played a hugely critical role in the inspiration and development of many of the maison’s inspired creations.

To that end, Chopard has launched the Eagle Wings Foundation, of which Karl-Friedrich Scheufele is a founding member. In partnering with the Eagle Wings Foundation, Chopard hopes to promote a more sustainable way of life while raising awareness of Mother Nature’s timely needs. Chopard has pledged to work with the foundation to re-introduce the Golden Eagle to its natural Alpine habitat.

Championing sustainability, Chopard has invested four years of research and development, creating an ultra-resistant metal dubbed Lucent Steel A223 that forms the Alpine Eagle. As precious and complex as gold, the repurposed steel derives from a re-smelting process that creates a material comparable to hypoallergenic surgical steel. It is 50% more resistant to abrasions than conventional steel and able to reflect light uniquely.

The Alpine Eagle caters to contemporary eagles, aspiring men who go above and beyond with foresight and determination. The collection gears to those who act on the challenges of tomorrow, aware of the importance of environmental issues.

Since 2011, Omega has been a proud and avid supporter of the non-governmental organisation Orbis International and its Flying Eye Hospital. Orbis was founded in 1982 to fight against visual impairment and avoidable blindness with programmes aiding the prevention and treatment of eye diseases.

Orbis is on a mission to ensure everyone has access to quality eye care, no matter where they live. With Omega’s support, the non-profit conducts surgery, distributes vital antibiotics to treat and prevent severe eye conditions. Orbis also disseminates crucial eye health information through radio broadcasts, film screenings and educational materials.

Orbis trains workers at all levels of the health system, including healthcare workers, leaders and governments, to improve the long-term quality of patient care. The NGO leads the charge in establishing a permanent or long-term presence, enhancing the capacity of health systems in vulnerable regions. Despite the challenges of a global pandemic, more than 29,000 training courses were completed by volunteer ophthalmologists, anaesthesiologists, nurses, and biomedical engineers throughout 2020 alone, to train eye teams in communities around the world.

To generate funds for the NGO’s efforts in developing countries, Omega frequently unveils limited edition watches. At the end of 2020, Omega unveiled a playful duo of De Ville Trésor timepieces geared to collectors who wish to support this great cause. Omega donates a portion of the proceeds from each of these meaningful timepieces to Orbis’ life-changing efforts.

The pair flaunts the same sunray-brushed blue dial with a gradient effect while the hour and minute hands hover over 18k white gold indexes. At 6 o’clock, the date window replaces the number 8 with a Teddy Bear as a tribute to the cuddly toys that Omega gives to every young patient undergoing Orbis treatment.

The two timepieces differ by  their bezel. The first is polished stainless steel, while the second shines with its diamond-paved setting. The Omega Master Co-Axial Chronometer Calibre 8511 powers both timepieces, which nestles in a 40 mm-diameter steel case and arrives in a special presentation box with a Teddy Bear key holder. 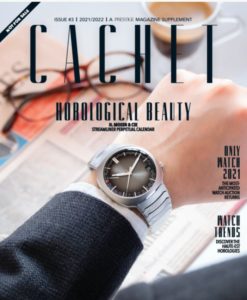 The 7th edition of Art of Time, the signature time

#Glamping is the best kind of outdoors accommodati