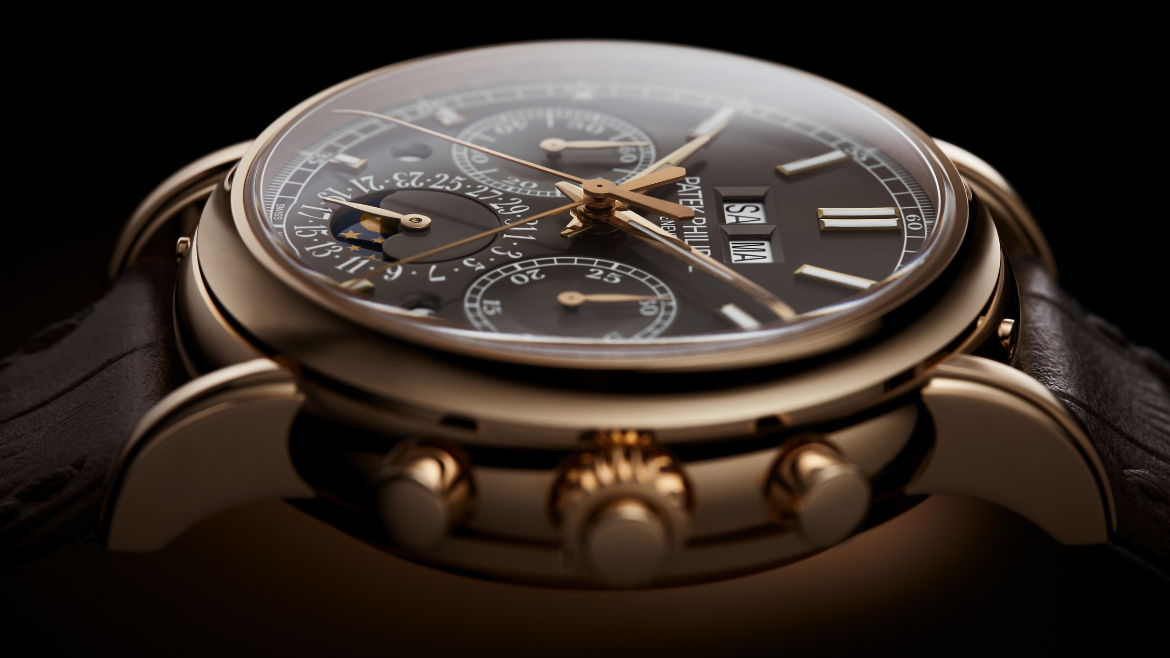 Three contemporary interpretations of Patek Philippe’s revered chronographs were introduced to the world last October, each an exquisite example of the Manufacture’s expertise in highly complicated timepieces.

It was in 2005 that Patek Philippe developed a complete range of chronograph movements, with or without additional functions, that proved its mastery in the field. That same year the Manufacture launched the world’s thinnest split-seconds chronograph movement, Caliber CHR 27-525 PS, which was entirely designed and crafted in its workshops.

This was followed in 2006 by the second “in-house” chronograph movement, Caliber CH 28-520, whose features include automatic winding, a modern vertical disk-type clutch system, a flyback function, and a large single counter at 6 o’clock – along with a chronograph seconds hand that can be used as a permanent (running) seconds hand. Two of the new 2021 models, namely Ref. 5905/1A (chronograph and Annual Calendar) and Ref. 5930P (chronograph and World Time), combine this movement with additional complications. 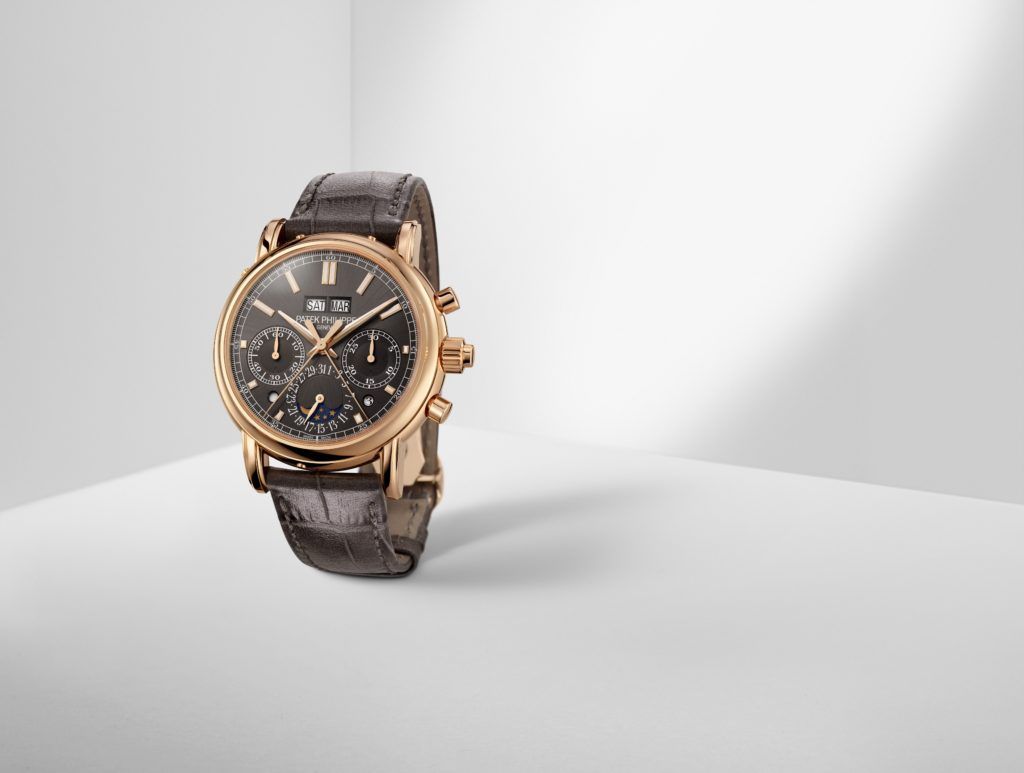 Of the three Patek Philippe chronographs introduced in October 2021, Ref. 5204R-011 is the sole model to feature a grand complication – a perpetual calendar, to be exact. Heir to one of the Manufacture’s most sought-after Grand Complications, Ref. 5204R-011 is an updated variation that joins the two rose gold versions introduced in 2016: Ref. 5204R-001 with silvered opaline dial and chocolate brown alligator strap, and Ref. 5204/1R with opaline ebony black dial and rose gold Goutte (droplet) bracelet.

Ref. 5204R-011 pairs its entirely hand-polished 40 mm rose gold case with a matching slate gray sunburst dial and shiny calf leather strap, the latter which features an embossed alligator pattern and a rose gold fold-over clasp. Horophiles will truly appreciate the rare and refined nuance exuded by this scintillating combination; the updated take on this great classic further enhanced by its exceptional features.

Rose gold faceted dauphine hands and gold applied hour markers – both with luminescent coating – provide perfect legibility while adding to the refined look of the dial, on which a day and month display in a double aperture is situated at 12 o’clock. At 6 o’clock, a date hand incorporating the moon-phase aperture can be found. A small seconds subdial features at 9 o’clock, while the instantaneous 30-minute counter subdial appears at 3 o’clock. Between 4 and 5 o’clock a small round aperture displays the leap-year cycle, whereas a similar aperture between 7 and 8 o’clock displays the day/night indication. These functions allow for precise adjustment of the calendar.

The model is equipped with interchangeable casebacks, one solid and the other sapphire crystal – the latter allowing an unimpeded view of the Caliber CHR 29-535 PS Q that beats within. The manually wound movement, first introduced on Ref. 5204P-001 in 2012, combines seven patented innovations, six for the chronograph functions and one for the split-seconds mechanism, with its traditional architecture that includes two column wheels and horizontal clutch. It boasts a power reserve, with the chronograph disengaged, of up to 65 hours. 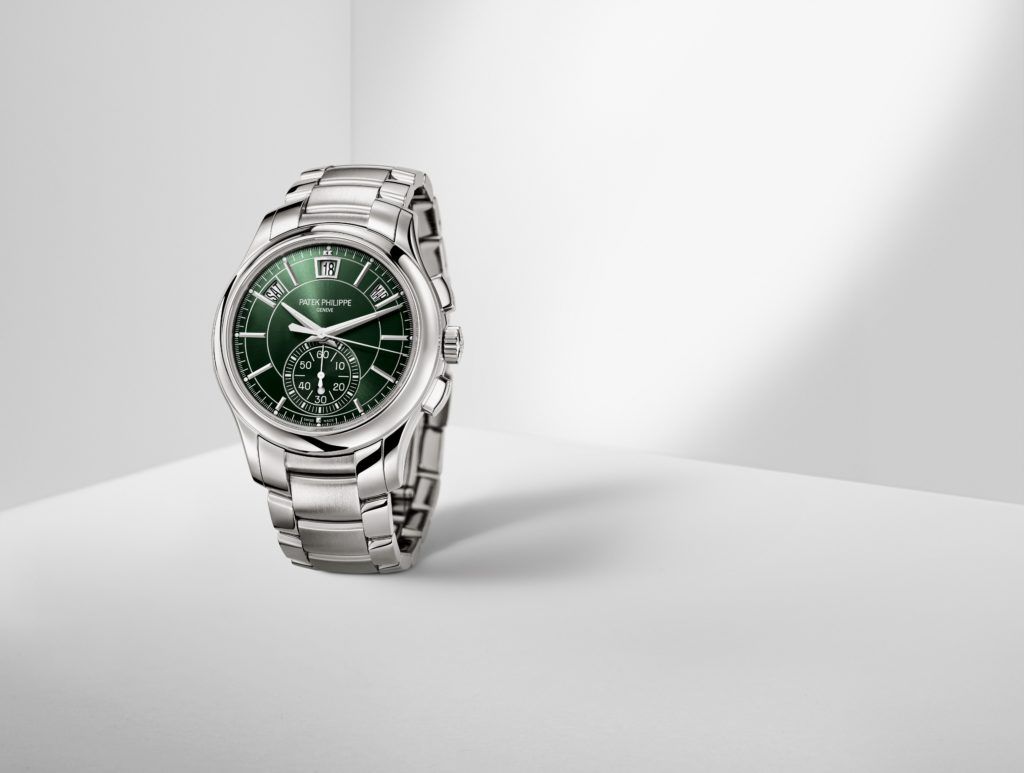 Ref. 5905 has always been a sought-after watch for its brilliant pairing of a self-winding flyback chronograph and a patented Annual Calendar. Now for the first time, it is presented in a bold and casual sporty design formed of stainless steel, a metal rarely seen on Patek Philippe models, renewing the way the brand’s complication watch is worn day-to-day. It joins the platinum version with blue dial (Ref. 5905P-001) and the rose gold interpretation with brown dial (Ref. 5905R-001) released in 2015 and 2019, respectively.

With its polished outer links and satin-finish inner links, it is evident that the watch’s three-link integrated bracelet takes inspiration from the contrasting finishes of the Aquanaut Ref. 5167/1A. A patented Patek Philippe fold-over clasp secured by four independent catches completes the sleek strap. Encased in the 42 mm polished steel case, which features a concave bezel and recessed sides, is the aforementioned enchanting sunburst olive green dial, accentuated with gold applied hour markers and white gold faceted dauphine hands with luminescent coating.

In spite of the additional functions it boasts, the watch maintains an elegant, uncluttered look. Peer closer and one will discern its many details: a central chronograph hand, a 60-minute subdial at 6 o’clock, a discreet day/night indicator at 6 o’clock, and three day/date/month apertures arranged in an arc on the top half of the dial – allowing an easy reading of the Annual Calendar indications.

Powered by Caliber CH 28-520 QA 24H, this self-winding movement with a power reserve of up to 55 hours can be admired through the transparent sapphire crystal caseback. Although it remains faithful to the traditional column wheel when it comes to its transmission of chronograph commands, it features a vertical disk-type clutch in lieu of a toothed-wheel horizontal clutch. The modification allows the central chronograph seconds hand to be used as a permanent (running) seconds display, while causing almost no wear and tear. The patented Annual Calendar requires only on correction per year (on March 1st) as it automatically takes account of 30- and 31-day months. 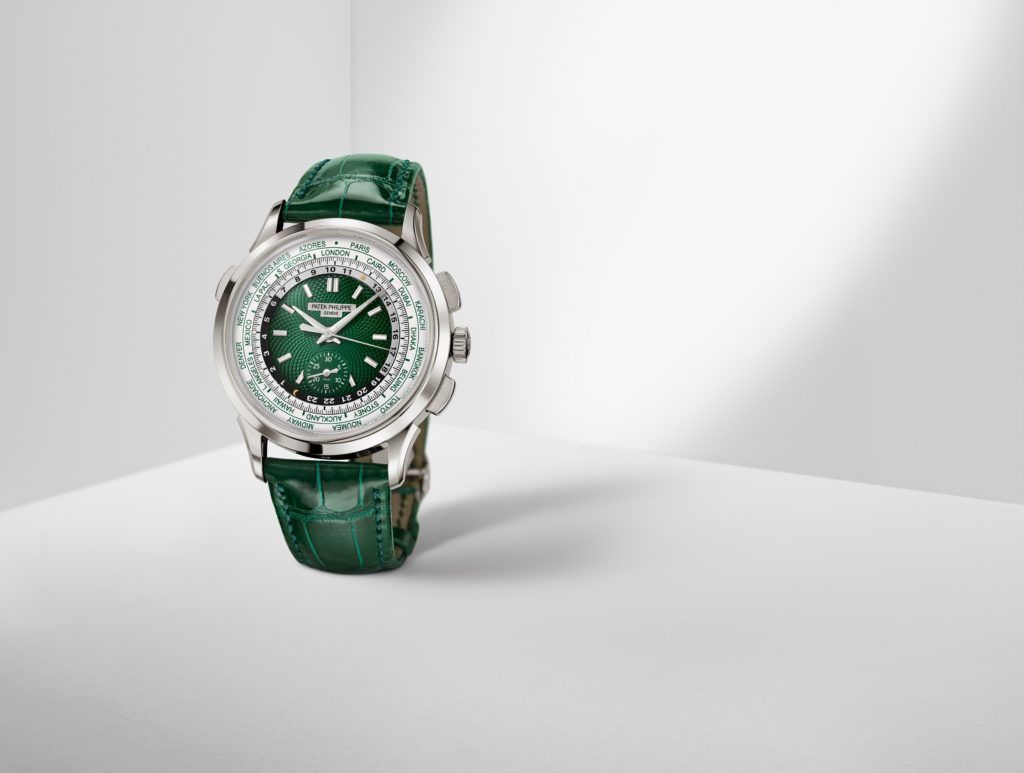 While stainless steel makes up the sleek form of Ref. 5905/1A-001, platinum is the material of choice for Ref. 5930P-001. This sporty and cosmopolitan reinterpretation joins the previous version (Ref. 5930G-010) launched in 2016, made of white gold with blue dial and strap. Inspired by Ref. 1415-1 HU (Heure Universelle or World Time), a one-of-a-kind Patek Philippe World Time Wristwatch with Chronograph and Pulsometer Scale released in 1940, Ref. 5930 pairs self-winding flyback chronograph with World Time – since the mechanism’s invention by Louis Cottier in the 1930s, it remains iconic in the Manufacture’s history and collections.

Also in green are the names of the cities printed on the corresponding disk. A simultaneous display of 24 time zones is made possible by the World Time function, with an exclusive patented mechanism that allows the correction of all displays simply by pressing the pusher at 10 o’clock. The same pusher selects the local city time displayed at 12 o’clock. At 6 o’clock, a snailed 30-minute counter is displayed. Good legibility is ensured by the luminescent coating on the watch’s gold applied hour-markers and the faceted Dauphine-type hands in white gold.

Visible through the sapphire crystal caseback is the Caliber CH 28-520 HU that is equipped with a column wheel and the modern disk-type vertical clutch. Like on Ref. 5905/1A-001, this translates to minimal wear and tear while allowing the central chronograph hand to be used as a permanent (running) seconds display – without affecting its accuracy or its power reserve of up to 55 hours. When the central hand is already being used as such or is performing an operation (“flyback” function), the pusher at 4 o’clock enables instant restarting of a timing operation.

Learn more about these timepieces at the Patek Philippe boutiques by Cortina Watch in Suria KLCC and JW Marriott KL, or visit Patek.com