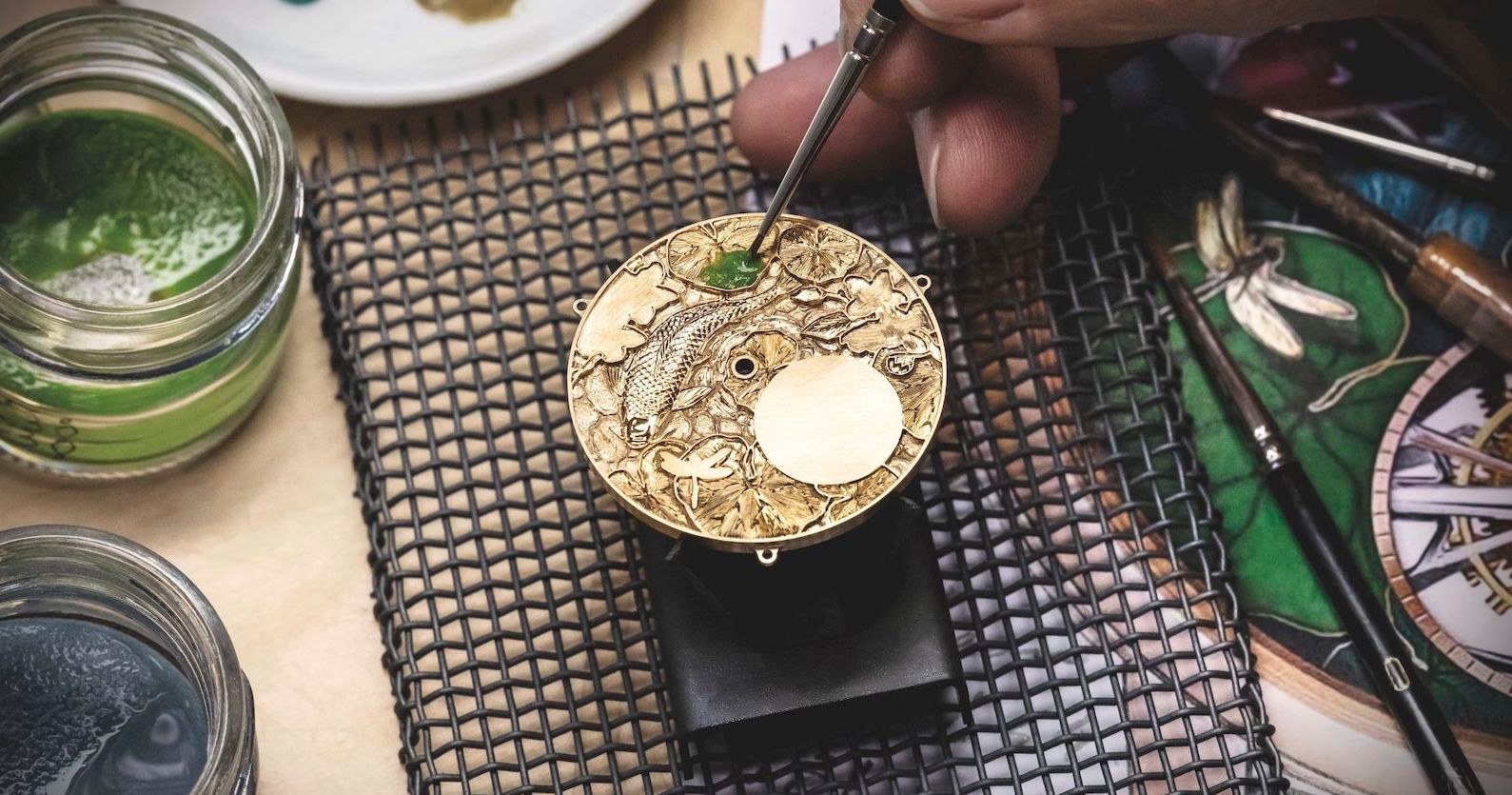 Les Cabinotiers is a division solely dedicated to the creation of extraordinary one-of-a-kind timepieces in the Vacheron Constantin universe. This dates back to the 18th century when master watchmakers – known as cabinotiers – worked in cramped workshops, called cabinets, located on the top floors of Geneva’s buildings that were bathed in natural light for a large part of the day. Inspired by astronomy, mechanical engineering and the arts in the Age of Enlightenment, it was in the hands of these gifted artisans and watchmakers where bespoke timepieces were created – mostly commissions by dignitaries of European courts to convey wealth and social standing.

While Vacheron Constantin has created custom timepieces throughout its history – American banker Henry Graves Jr and King Farouk of Egypt were known to be avid collectors of unique pieces created by the maison, it wasn’t until 2006 when its very own division of Les Cabinotiers was established.

With an aim to revive the great watchmaking spirit of 18th-century Geneva, the manufacture continues the tradition of offering its most affluent clients an opportunity to create and own made-to-measure timekeepers. Christian Selmoni, Vacheron Constantin’s Style & Heritage director, elaborates: “We have clients who want exclusivity in a watch that no one else on the planet has. We’re talking about customised timepieces which are considerable in value, so this is definitely not a client’s first watch purchase. Our clientele typically has good knowledge of Vacheron Constantin watches and they want to invest in a timepiece that is closest to their dreams.”

Fortunately for collectors, the dedicated Les Cabinotiers department comprises designers and engineers who possess top-notch technical and manual expertise, a wealth of scientific know-how along with a thirst for new ideas to transform dreams into reality. They conceptualise and create mechanical masterpieces on demand, producing artistic expressions of time that feature métiers d’art techniques ranging from guillochage to marquetry, extreme complications or a combination of both.

According to Selmoni, it can range anywhere between 18 months and eight years from conceptualisation to the delivery of a Les Cabinotiers timepiece. “I say eight years because of the reference 57260, which is the most complicated watch ever made in history and a bespoke Vacheron Constantin piece. A far less complex timepiece can take a shorter one and a half years to complete.” For clients, creation steps – which include manual renderings and mock-ups – are most important since this is where they can visualise their commissioned piece.

What would the most challenging part of creating a Les Cabinotiers timepiece be? “I’d say every complication is a technical challenge, while crafts are an aesthetic challenge. Since both watchmaking complications and decorative arts require space on a timepiece, the challenge is the ability to incorporate the craftwork without the watch becoming too large,” Selmoni points out.

While the manufacture has an elite team of guilloche experts, enamellers, engravers and jewellery setters at its disposal, there are occasions where a client’s request for a specific design calls for an external artisan. “Presently, our clients at Les Cabinotiers prefer grand complications along with decorative arts. Depending on the craft requested, we sometimes engage another craftsman from beyond the maison. A good example is cloisonné enamel made by the workshop of Mrs Anita Porchet, the most renowned enamel artist. We’ve also worked with an independent artist for the Métiers d’Art Villes Lumières collection, where the gold and diamond powder were painstakingly applied one tiny speck at a time by Japanese artist Yoko Imai,” explains Selmoni.

Beyond creating bespoke pieces for its patrons, another mission of the Les Cabinotiers division is enabling its immensely talented craftsmen to fully express their art by taking on challenges to create unique pieces imagined and commissioned by the manufacture. Each year, the department creates a thematic collection – featuring grande sonnerie, armillary, astronomical or sky chart complications – inspired by a creative universe that the maison holds dear.

Its latest collection, themed La Musique du Temps, pays tribute to the art of music with an astounding assortment of 11 one-of-a-kind minute repeater masterpieces. The cherry on top: The unique sound (akin to a fingerprint) of every one of these timepieces was recorded in Studio 2 of Abbey Road Studios and each watch is accompanied by a print of the audio-phonic signature certified by the studio. Additionally, the Les Cabinotiers department also presented four unique creations highlighting the maison’s technical prowess and artistic craftsmanship.

We asked Selmoni which piece from the collection had caught his eye. “The Les Cabinotiers Minute Repeater Ultra-thin – The Dance of Gemstones is growing on me. The combination of a minute repeater and a great-looking dial with refined, sophisticated ruby indexes is so chic. It’s an understated way to wear a bespoke piece with a grand complication and encapsulates the style elements that I love at Vacheron Constantin.”

Born from the need to tell the time in the dark when candlelight was the only source of illumination, chiming or audible watches occupy a special place among horological complications. The first mention of a chiming watch in Vacheron Constantin dates back to 1806: A gold pocket watch with a minute repeater registered by the founder’s grandson Jacques-Barthélemy in the very first production register kept in the company’s archives. Since then, repeater watches have been an integral part of the manufacture’s heritage. Here’s a closer look at the collection, which was introduced to top-tier patrons and collectors in Singapore earlier in December.

A timepiece of rare complexity, this masterfully integrates a tourbillon regulator aimed at enhancing tradition; a minute repeater embodying the noble lineage of the maison’s chiming watches as well as a rotating map of the celestial vault to highlight the cosmology of the universe on the caseback.

The unique pair of Les Cabinotiers ultra-thin minute repeater models, featuring 41 and 39mm diameters, beat to the rhythm set by the 1731 calibre (named after Jean-Marc Vacheron’s birth year), an ultra-thin movement with meticulously developed acoustics. The pieces are accentuated by Grand Feu enamel dials adorned with ruby stone hour markers, with the first ladies’ minute repeater graced with a row of brilliant-cut diamonds totalling 1.9 carats on its lugs and bezel, and crown set with a cabochon.

Powererd by the 1731 calibre, an ultra-thin movement featuring carefully studied acoustics, its classic style exudes a refined look, embellished with Arabic numerals appearing in an original font on a Grand Feu enamel dial. This 41mm timepiece is for the connoisseur as only the minute repeater slide piece hints at its true nature as a complicated watch.

A tribute to the grand tradition of “musical” watches by Vacheron Constantin, this exquisite model houses a grande and petite sonnerie movement with a minute repeater mechanism. The case honours the art of hand engraving with a motif depicting the score of Beethoven’s sixth symphony.

The two models are equipped with a revisited movement – the 1731 QP calibre – which combines a minute repeater and perpetual calendar at the heart of an extremely slim white or pink gold case. On the dials: an intricate hand-guilloché sunray pattern and multiple indications.

The four new one-of-a-kind creations convey the rich tones of the crafts cultivated within the maison perfectly. Masterpieces of engraving and enamelling, they are an invitation to admire dials graced with striking naturalistic koi motifs. To set the tempo for these four watches, Vacheron Constantin chose its 2755 TMR calibre, combining the precision of a tourbillon regulator with a minute repeater featuring the manufacture’s latest developments.