A Journey Through Marvellous Morocco 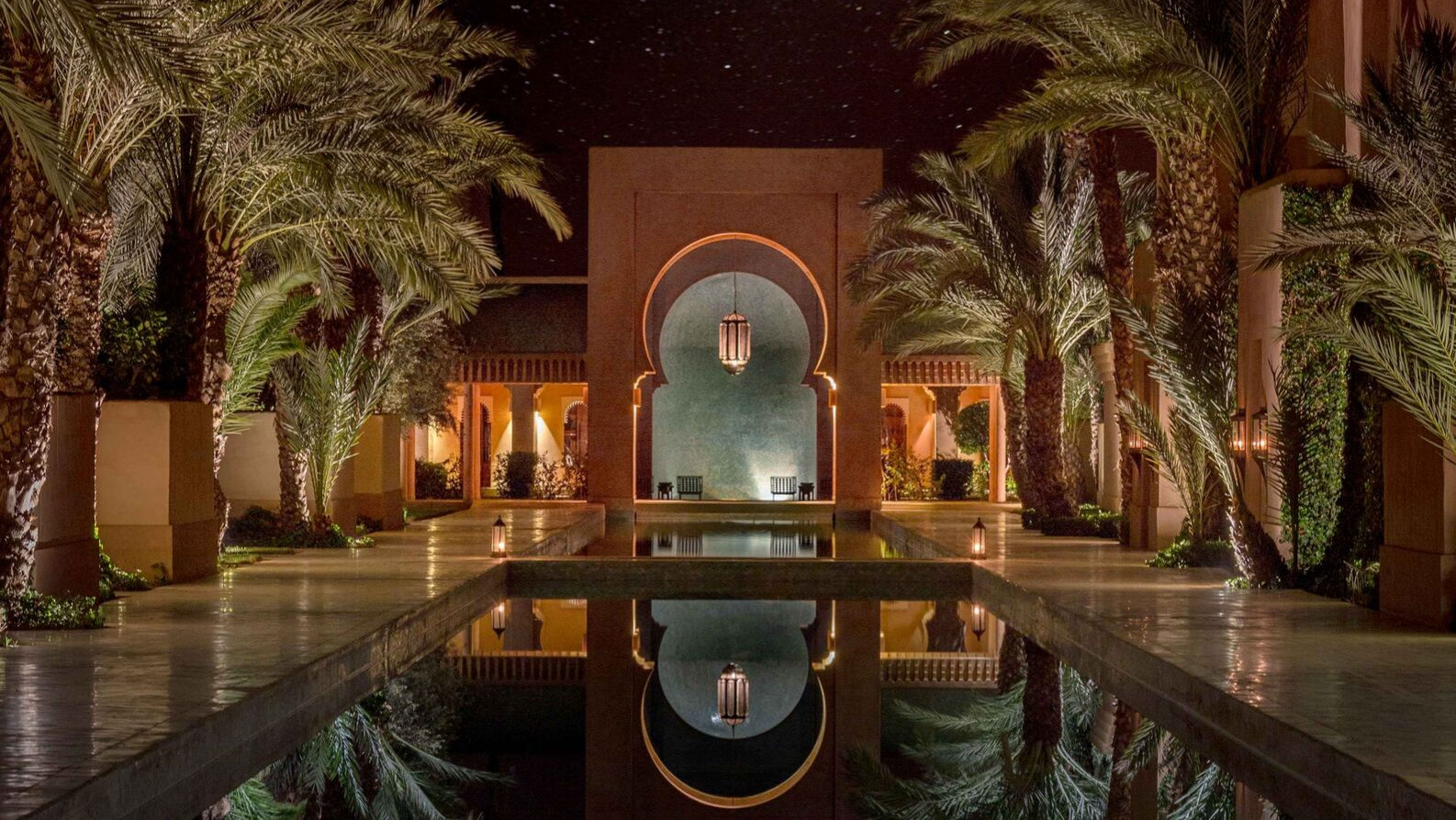 Travel
A Journey Through Marvellous Morocco
Share
Next article

We’re seated on velvet cushions, our feet dipping into the cool water flowing along an irrigation channel beneath our picnic table. Overhead, olive trees soar, forming a perfect arch that provides respite from the desert heat. We’re at Dar Ahlam, a restored 19th‐century kasbah (citadel) overlooking the Atlas Mountains that’s roughly a four‐hour drive south from Marrakech. I note how perfectly the colours of our meal complement the surroundings, from the mint‐green crockery to the olive oil made here, the zucchini soup and the sprinkling of pistachios on our tomato salad. It’s clear that every detail has been meticulously considered.

Our waiter, Ahmad, walks towards us, bearing dessert on a silver tray. “Are those apricots?” I ask him. Almost apologetically, he tells us they’re peaches before disappearing beyond the olive grove. Moments later, a rustle of leaves signals his return. With a wide grin and a flourish, he produces freshly plucked apricots.

Let’s rewind for a moment to our arrival in Marrakech, where on checking in at the impossibly beautiful Amanjena we discover that our rose‐hued pavilion — inspired by the fabled reds of the city itself — has been personalised with framed photos of our family. Our elegant dwelling is sprawling, with an outdoor minzha (gazebo) that could easily seat a dozen, a glittering emerald heated pool and a soothing petal‐strewn fountain.

With snow‐capped mountains as a backdrop and surrounded by date palms, Amanjena is a blissful retreat where, after our long journey, unwinding is the order of the day. I’m slathered in therapeutic argan oil and herbs at the spa, then settle into an oversize outdoor bed overlooking an ancient-style reflecting pool to enjoy live Moroccan music. When the mercury level drops, we retreat indoors to feast on tagine and tangia under vaulted ceilings and Moorish arches.

Magical though Amanjena is, we nonetheless venture beyond its confines and into the heart of Marrakech, whose red-walled medieval medina is crisscrossed by narrow lanes. A former imperial city, it’s a melting pot of Berber, Roman, French, Spanish and Arab cultures. The legendary souk is chaotic but compelling: we’re charmed by the heady aroma of spices, the stalls piled high with colourful fabrics and ceramics, leather babouches (heelless slippers) and brass lamps strung from ceilings, pedestrians sidestepping motorcyclists and vendors peddling an assortment of wares.

Our guide introduces us to the 19th‐century Moorish Bahia Palace. Richly decorated with marble, stucco, cedarwood carvings and stained‐glass windows, the buildings are organised around lush gardens and shady courtyards. Next, we proceed to a historic walled quarter known as mellah, which was once home to the city’s Jewish community.

The next chapter of our journey takes us up into the awe‐inspiring High Atlas, where we’re headed for Kasbah Tamadot, Richard Branson’s luxurious mountain retreat. Nestled in a valley, it offers views of Toubkal, which at more than 4,000 metres is the highest peak in the Arab world. Immediately, I understand why Branson fell so much in love with the property that he bought it almost at once, eclectic contents and all.

Pleasant surprises await at every corner, from intricately carved doors to unique art pieces and tapestries, and a cobalt-blue pool filled with rose petals. The garden is equally alluring, but my favourite place to enjoy the fresh mountain air over a pot of mint tea is in a crisp white tent decorated with tasselled cushions and kilim rugs by a stunning infinity pool.

Our master suite is a private mini kasbah with a glorious terrace, and a view of the valley and river below. As expected, the service is impeccable. The staff cosset us with blankets, an allergy menu and an amazing tagine, then lead us to the bar in an opulent Berber tent for a nightcap.

But there’s more to do at Kasbah Tamadot than just relaxing. We shop at the Berber Boutique, which works with the Eve Branson Foundation to support local artisans, and there’s croquet on the lawn. The area is also a paradise for hikers, with ample opportunities to discover nearby Berber villages, where the culture hasn’t changed for centuries.

To the east at the edge of the Sahara lies the city of Ouarzazate, whose rugged surrounds have featured in countless movies and TV series. We could fly there but, feeling adventurous, decide instead to get there by road via the dizzying hairpin bends of the Tizi n’Tichka pass. As the mountains retreat behind us, the landscape changes from green meadows to a rocky desert. To the north of the city lies the fortified, earth-built village at Ksar of Ait-Ben-Haddou, a UNESCO World Heritage Site that’s a perfect example of southern Moroccan architecture. Here, we navigate narrow streets flanked by souvenir shops and climb up steps for sweeping views of the spot that served as the city of Yunkai in Game of Thrones.

Leaving Ouarzazate behind, we’re driven to Skoura, an oasis town that was once an important trading post. Crumbling kasbah dot the sunbaked land, the most famous being Kasbah Amridil, which is now a museum with a fascinating collection of artefacts and tools.

A dusty road takes us through a dry riverbed before we arrive at Dar Ahlam (“house of dreams”), a 200-year-old kasbah that’s our home for several nights. The rooms are all unique, except for the absence of locks and TVs. Ours has an outdoor courtyard, a fireplace and a reading nook, complete with its own library.

Getting lost is part of the fantasy. You never quite know what to expect when you duck through tiny hidden doors, walk through moody passages or climb mysterious stairways. There are salons (separate ones for men and women), a library and — my favourite find — a rooftop bathed in the glow of the setting sun.

We look forward to mealtimes, an experience that’s always private, theatrical and wholly indulgent. There are no restaurants or menus — and no rules either. “Anything is possible,” says the manager. “You can have dinner in your bathrobe if you wish.”

So we have a picnic on the lawn, with colourful sashes draped on trees and birdsong as an accompaniment. We also indulge in a dreamy, white-themed dinner in a garden softly lit by candle lanterns and floating tea lights, and with flowers dangling in mid-air. We’re left completely alone — until, that is, the staff magically appear whenever we need something, as though they’ve read our minds.

One evening, we’re driven to Dar Ahlam’s Nomad Camp through mud-brick villages perched above the Valley of Roses, where we glimpse farmers, hidden rivers and rose plantations. Our arrival is perfectly timed for sunset and the staff, who’ve already erected a tent complete with a bedroom, dining area and bathroom, have prepared an evening meal.

We start with tea, then move on to canapés and cocktails before enjoying a Moroccan dinner in the great outdoors surrounded by lamps. With the stars twinkling above us and no other souls in sight, I savour the moment in this special corner of the world that feels as if it had been carved out just for us.