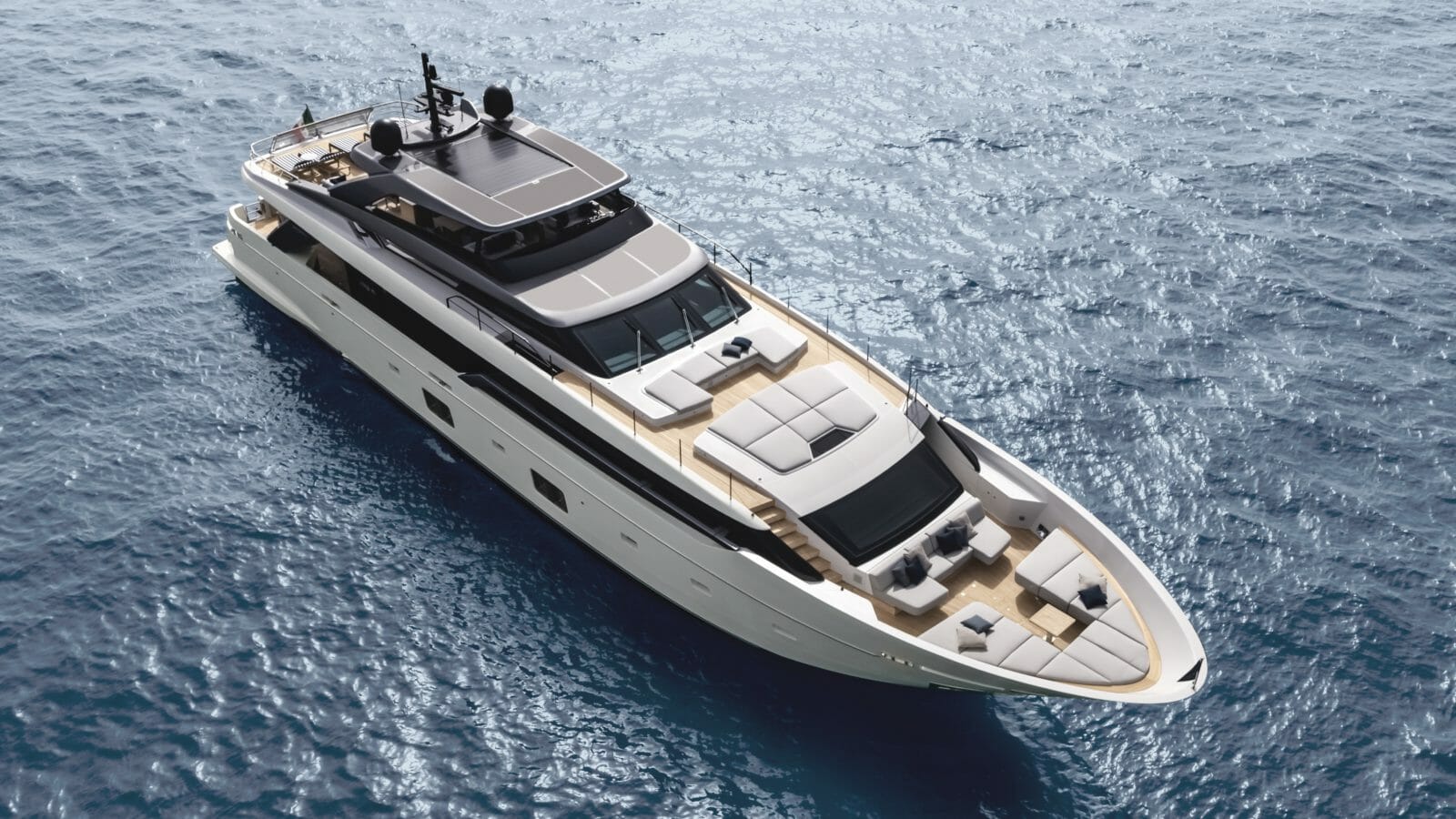 Instead of riding the wave of symmetrical designs, Sanlorenzo dares to go against the tide by revolutionising the nautical world with the introduction of its first asymmetrical yacht in 2018.

Now Sanlorenzo introduces two new models in the SL range along with one in the SD range, all boasting the high-quality craftsmanship that the Italian luxury yacht builder is known for. Par for the course, the yachts are made-to-measure, each one a bespoke creation that is perfectly tailored to its owner’s taste, ensuring that no two yachts are truly identical to one another.

A culmination of ideas brought forward by creative minds from different experiences and perspective, the asymmetrical concept is born from an original idea by brilliant car designer Chris Bangle, the designer of the external lines Bernardo Zuccon of Zuccon International Project studio, and Sanlorenzo’s uncanny ability of translating even the most complex proposals into reality.

With over 60 years of experience in yacht production, Sanlorenzo never fails to hit the mark with each model. Step on board and let us take a look at what the new models have to offer. 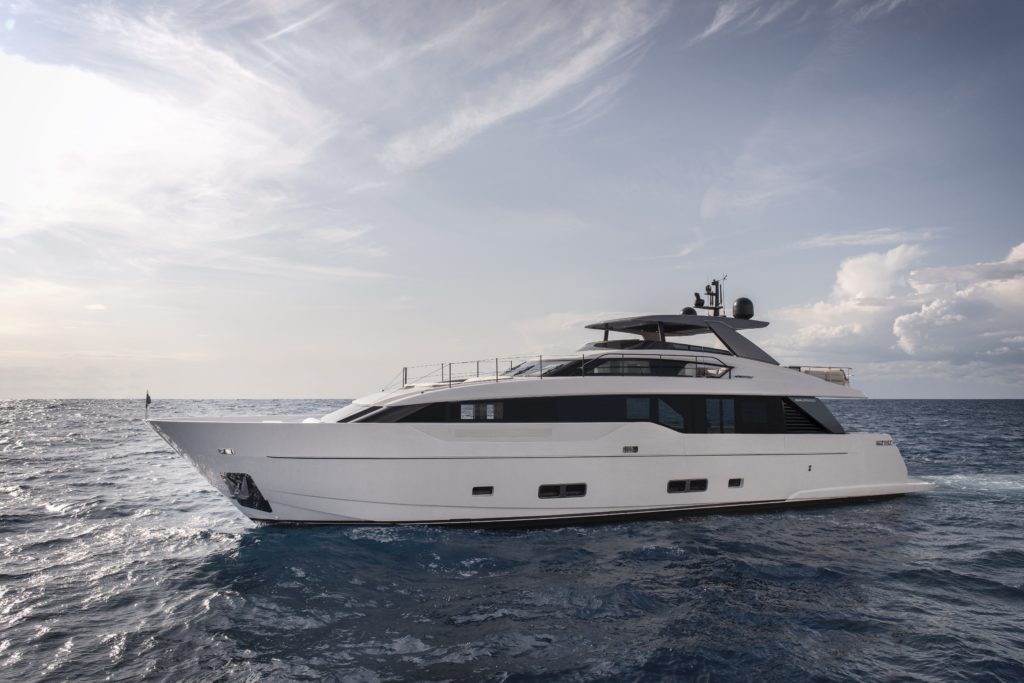 Coming in at under 30 metres with its 27.6 metres length and 6.5 metres width, the SL90Asymmetric (SL90A) boasts an innovative layout that is made possible by its asymmetrical configuration. By retaining only the starboard side of the bridge, this allows the salon on the main deck to be enlarged to provide more space. The port side, which has been moved to the roof of the structure, is fitted with full-height lateral windows facing the sea, allowing for more luminosity.

Much like what one would find on larger yachts, the main deck and the owner’s cabin can be found on the same level – with the latter featuring a dedicated access to the bow area, which is connected to the fly bridge. Additionally, a sundeck is integrated into the full-beam superstructure.

The “One Way” glazing on the SL90A gives a sense of cleanliness and aesthetic continuity as, externally, it is chromatically similar to the hull and dematerialises the perception of empty spaces.

“SL120 and SL90A represent further confirmation of a path – which began with the introduction of the SL102 and now consolidated with the presentation of these new models – of exploration of the field and the concept of asymmetry, which has allowed us to redefine the way of inhabiting the vessel,” states Bernardo Zuccon. “The spaces and fluxes of life on board have in fact been redesigned in a different key, offering the opportunity to perceive the sea from new and dynamic perspectives, which are constantly changing as you move around on board. This extension of the asymmetric range is today also a further affirmation of credibility not only from a design point of view, but also from a commercial point of view, demonstrating how research into lifestyle concepts is as topical as ever and able to positively influence the rationale of the market”. Measuring 36.92 metres in length and 7.6 metres in width, the SL120Asymmetric (SL120A) is the new flasgship of Sanlorenzo’s asymmetrical range. What stands out in this model is the asymmetrical configuration is applied only in the living area of the main deck, which extends from the cockpit to the middle to the vessel.

The foredeck displays an interesting design: it is kept only on the right-hand side of the main deck, flanking the living area up to the centre of the yacht, where it is then brought to the fly bridge and finally swoops down a staircase into the external living area in the bow.

Through a system of sliding doors, the starboard side of the saloon seems to almost “dematerialise”, effectively blending the indoor environment with the outdoors. On the port side, a wide body solution is offered through the lowering of a part of the bulwark, giving a perception of maximum transparency.

A complete exploitation of the internal space of the adjoining bow area is also made possible due to the asymmetry. There, the owner’s cabin can be found, extending across the entire width of the hull.

Outdoor spaces are not neglected in the yacht’s design, as evident in the outdoor living area in the bow, which is spread over two decks linked by a staircase. There is a direct, private access from the owner’s cabin to the area – a 24 sqm flexible space that can be adapted to the different needs of the owner.

In the aft area of the Lower Deck, the sense of connectivity between the sea and the livability of the outdoor spaces is truly felt. Thanks to the folding terraces, the garage can be transformed into a grandiose 45 sqm Beach Club, offering guests use of the sea au fil de l’eau.

Interior designed by Martina Zuccon, it has a strongly marine ambience, characterised by neutral tones and a great harmony of colours. Both the wall panelling and the floor are made of Thai walnut wood, its fine colour projecting a sense of elegance and lightness. A more industrial touch can be found on the ceiling, which has a metallic-effect lacquer finish. 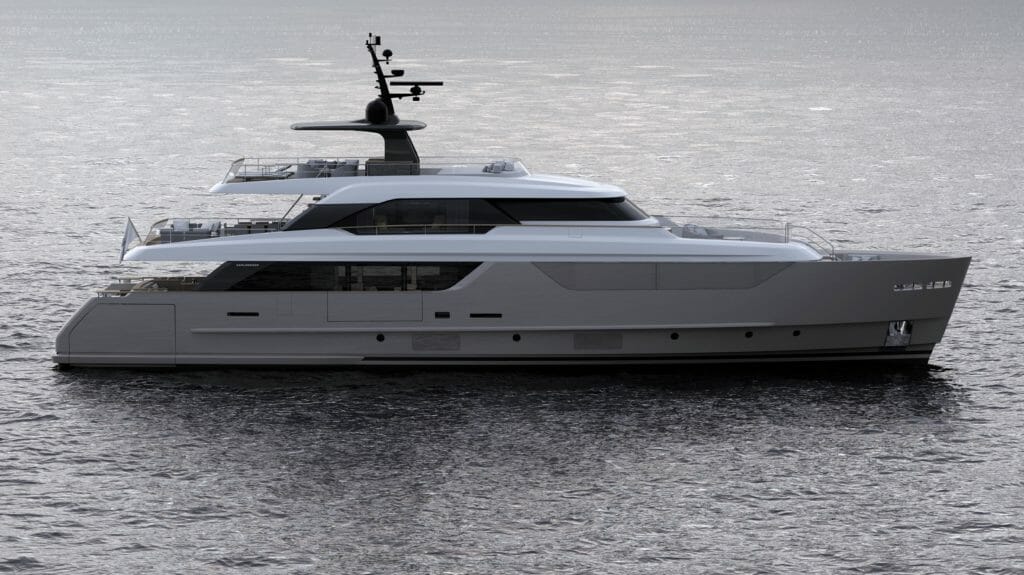 Sanlorenzo’s historic line of semi-displacement models welcomes a new addition in the form of the 35.75 metres long and 7.9 metres wide SD118.

“This project continues the path started with SD96 and confirms my deep interest in this range of products, composed of navettes, a term that recalls some of the most romantic aspects of sailing, linked to the desire to go to sea without haste, enjoying life on board for a long time,” says Bernardo Zuccon, who collaborates with Sanlorenzo to design the new layout and the external lines that represent a contemporary interpretation of the shuttles’ classic lines.

“SD118 is therefore aimed at those shipowners who enjoy what in my opinion is the greatest luxury, namely time.  If on the one hand I started from the desire to maintain some “fixed points” related to this fascinating typology of which the project is part, on the other hand I wanted to continue my research related to new concepts of living the sea. Hence my choice to apply the theme of asymmetry.”

Developed with a new performing hull that guarantees an excellent performance at sea, SD118 also features a stern area that, once at anchor, transforms itself into a kind of island, its side terraces opening up to create a beach of almost 20 sqm walkable space. On the beach, a platform with a lift system has been fitted so as to bring guests closer to the sea – a solution that expands space and comfort, in comparison to the previous models of the SD range.

At the bow, a large outdoor living area is located, spread over two interconnected decks. Hidden under the staircase that connects these two decks is a sliding companionway, which allows the owner total privacy and direct access from the large full-beam cabin.

The asymmetry represents the core of the innovation of the new model of the semi-displacement line, as it is extended on the upper deck, allowing a direct view of the sea from both sides, while generating a perfect connection between the interior and the exterior. While the starboard side resembles a wide body hull, the port side features a walkway that leads seamlessly from stern to bow, along which the bulwark at the salon opens to form a terrace.

13 units of SD118 have already been sold, carrying on board important names from the world of design. It ranges from the version with the interiors by Daniel and Michel Bismut, to the one with interiors by Guillaume Rolland of the French studio Liaigre, to the unit designed by Patricia Urquiola, who continues her collaboration with Sanlorenzo by furthering the path started with the interior design project of SD96. 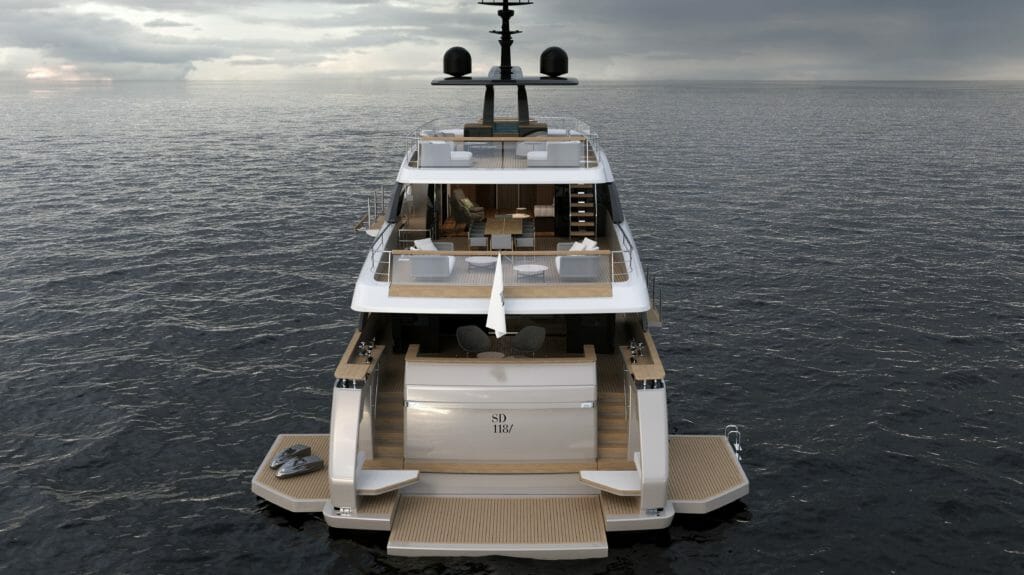 Recently, Sanlorenzo has reconfirmed its deep awareness towards environmental issues by signing an agreement with Siemens Energy, forming a collaboration to develop new solutions to reduce environmental impact. The collaboration will see them working on creating methanol fuel cell systems for generating electricity on board, creating new generation diesel-electric propulsion systems aimed at reducing GHG emissions and fuel consumption (for yacht models over 50 metres), and creating new-generation hybrid propulsion systems designed to reduce GHG emissions and fuel consumption (for boats below 50 meters).

Contact the Malaysian office of Simpson Marine at [email protected] or +606 647 6868 for more details on the new Sanlorenzo yachts.