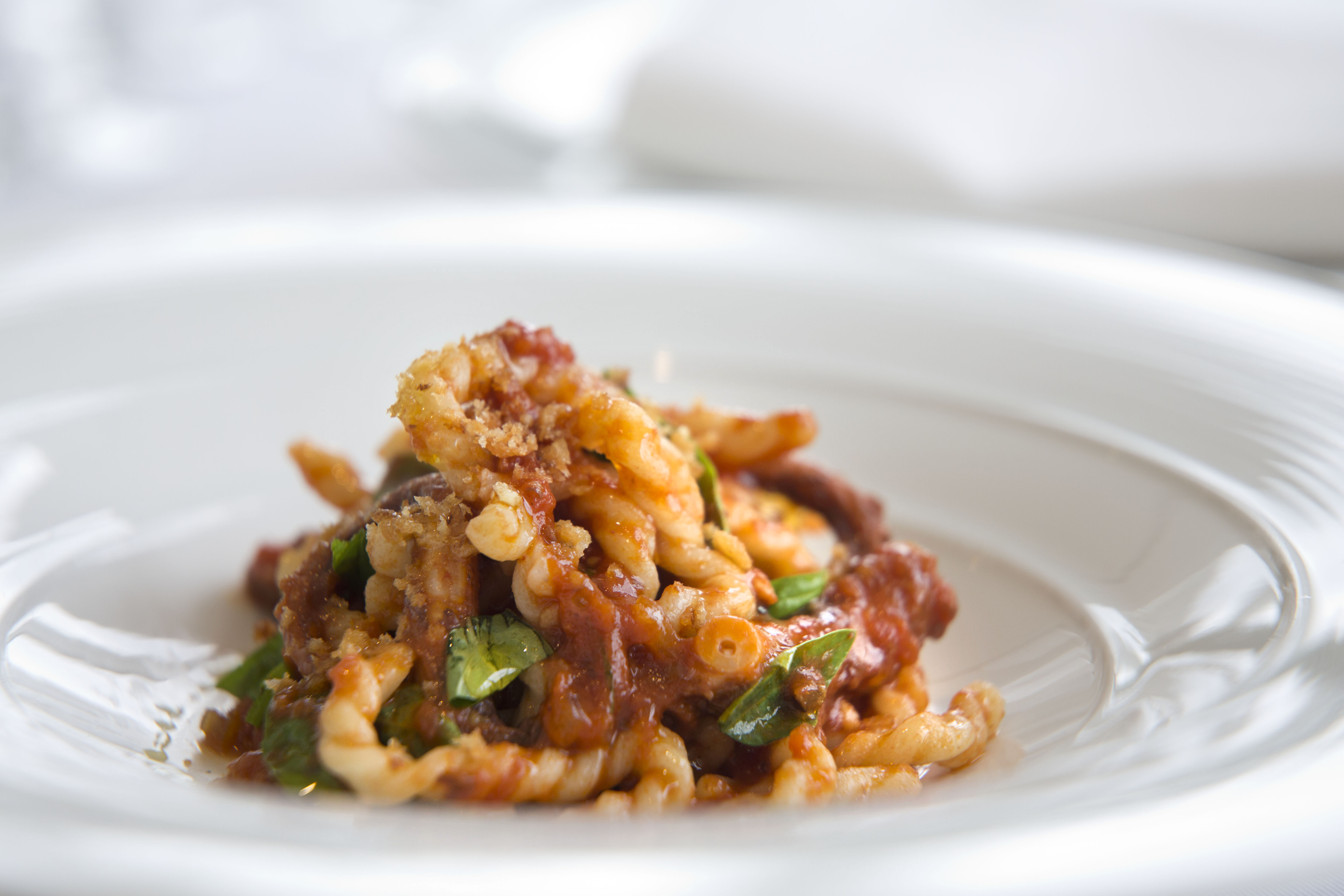 It’s the oddest preamble before meeting the main man. I’m in Shanghai at the re-launch party of the cavernous mall, Plaza 66, where the highly anticipated opening of Marea, by celebrity chef Michael White is, for a glutton like me, the most exciting venture in the entire enterprise. Sure, Grammy winner Alicia Keys was performing the same night as our meeting, but White’s legendary culinary skills are what I’ve flown up for.

Now, usually we get to see the restaurant and talk at length about interiors, the linen on the table, the cutlery, the ambiance and atmosphere, the mood that’s about to garnish our entire meal. But when we got to this venue we were instead greeted with a makeshift space, cordoned off from the general public, which had been etched out as our dining venue. The restaurant itself is still under construction, and no one would go on record to state when it would open apart from “first quarter of 2018”. Ok then.

White’s been given access to a kitchen space in the mall which his team has commandeered (with permission!) so the meal and menu is all by him. It’s all very odd, but then, when in China, you learn to go with the flow.

We meet long after dinner, the next day in fact, over a cup of coffee. Well, cans of Coca Cola, but you catch my drift. And so, we began…

What’s in your fridge right now?

Back home, what do you always have in your fridge?

I live in the Upper West Side so whether it be smoked salmon from Zabars – we eat a lot of that kind of stuff at home – just anything that’s different and healthy. I’ve lost 140lbs over the last four, five years but I eat everything. I do all of my eating when I’m outside of New York. When I’m at home, I just eat very simple, healthy cooking really.

The weight loss is incredible – what ignited the health fire?

I arrived at 41 years of age and I really kind of resonated with the fact that I’ve tasted so many different things and I don’t feel compelled to finish everything, and to eat with such gusto, and at the same time health was key. We have 1,200 employees and I needed to clean my act up a little bit. And I have a 14-year-old daughter as well so I needed to step back a little bit from eating too much. I do a lot of walking as well. I don’t use a driver in the city and I walk between the restaurants and subway, about 13,000 to 15,000 steps a day, so that’s how I do it.

What are your thoughts about fusion food and fusion cuisine?

White flips the bird. While I stare at his middle finger, the room bursts out laughing.

No listen, fusion food I mean that’s kind of the word that’s popular in conversation but, you can say what I’m doing is fusion like I’m taking bits and pieces; I might take Bottega de bugine from Sardinia and mix it in with borlotti beans that are Tuscan, you know that kind of thing. So that could be fusion. I think what you’re speaking of fusion is maybe small food with mixing things. I think there’s a place for it but there’s very, very few people that can do it.

You have a wonderful restaurant in Hong Kong, and another one opening in Plaza 66. What are the challenges of opening a restaurant half way across the planet from home?

Well there’s always challenges but I think the challenges are mitigated with the fact that where we are at this time right now, in Shanghai and in Hong Kong for that matter, the ability to get the product that we want. Procuring great, quality ingredients is key. Being able to secure a product is really not a challenge right now, maybe ten years ago when St George first opened it was a little bit more of a challenge but there are people that are making burrata in Shanghai. So, I don’t look at it as a challenge. Restaurants are like children, but children grow up, restaurants don’t, so the amount of training you constantly have to do all of the time is paramount because if you don’t it won’t function as a restaurant and be of quality.

How do you face restaurant and food critics when they come to your restaurant in New York versus your partnership-endorsed eateries. Obviously, it’s not going to be the same experience.

I don’t see critics, I focus on the customer. Let me give you an example; you use a certain amount of sodium or salt water in New York and in Hong Kong it’s different, it’s probably 25% less because their palettes are different. And so that’s how we change. You know how many of my peers that have opened in Hong Kong and if they don’t change, they’re not going to be open for very long.

So how often do you come to Asia – what’s it like compared to the New York dining experience?

Listen, anytime I get here, there’s a lot of people that want to partner up. And I don’t mean that in an arrogant way. Picking Hong Kong was strategic, seven years ago… I can’t believe it’s that long already! It’s been incredible. It’s all strategy; I mean, strategic in the sense of we’re doing it in specific spots like Hong Kong, Shanghai – I didn’t pick that for shits and giggles. And we’ve long looked into Shanghai because of its size and the fact that there’s so many synergies between New York and Shanghai.

Back to reviews and critics – how do you face the press?

Well, everyone’s a critic now. You know we have a saying, critics are like assholes, everyone’s got one. So, it isn’t just the guys who work for papers and magazines.  The food that we’re cooking, there’s always going to be new nuances and it’s impossible that food tastes the same everywhere; tomatoes, when you’re cooking in Italy, taste different, carrots taste different in America. We’re very fortunate now though that we are able to get produce here. After 27 years cooking in the kitchen, I’ve realised it’s a client relationship, not the critic.

What bothers you? The food bloggers? The Instagram-ers that have popped up?

No way – they are so important! Type in fuselli octopus and bone marrow – there’ll be 75,000 photos of me, it’s like instant advertising. I did an interview with New York Times or… maybe the Wall Street Journal and they asked me the same – and no, it’s no problem. But obviously when they’re setting up tripods, standing on chairs… I mean I think that’s a little much.

Your thoughts on celebrity chefs on TV?

I tell you what, we’re not saving anybody’s lives and when I say that, chefs take themselves really serious; they fold their apron, they think they’re hot shit. I mean come on…

What would you tell the new, untrained food bloggers with massive following but can’t spell ketchup right?!

Food bloggers and critics that don’t talk to the chef are worrisome. They need to ask the chef what they’re doing. I see many untrained writers but many people look at them because maybe they have a snappy website or they have the right banners and things like that. But there’s really no substance. Lots of smoke and no fire. It’s like a critic wrote about – this is not even about food – one of the critics wrote about the fact that I had electric candles in a restaurant. Well you have to have a fucking fire permit and until you get a CFO you can’t have open candles so you should have fucking asked me instead of writing about it!

Sign up to get the latest luxury and lifestyle news delivered to your inbox.
P. Ramakrishnan
Society Editor
P. Ramakrishnan has been a journalist and editor in Hong Kong for the past decade. He jump-started his career writing the Society column for South China Morning Post when... Jesus was a boy. He went on to write about celebrity, lifestyle, luxury, menswear and endless spools on the juggernaut that is Bollywood. Krishnan knows far too many people in the 852 and is likely to be seen at the opening of an... envelope. He has been asked to ease up on event-hopping but then he looks at counsel like that with the disdain one reserves for those wearing a brown belt with black shoes.
events Parties celebrities Lifestyle luxury menswear The List