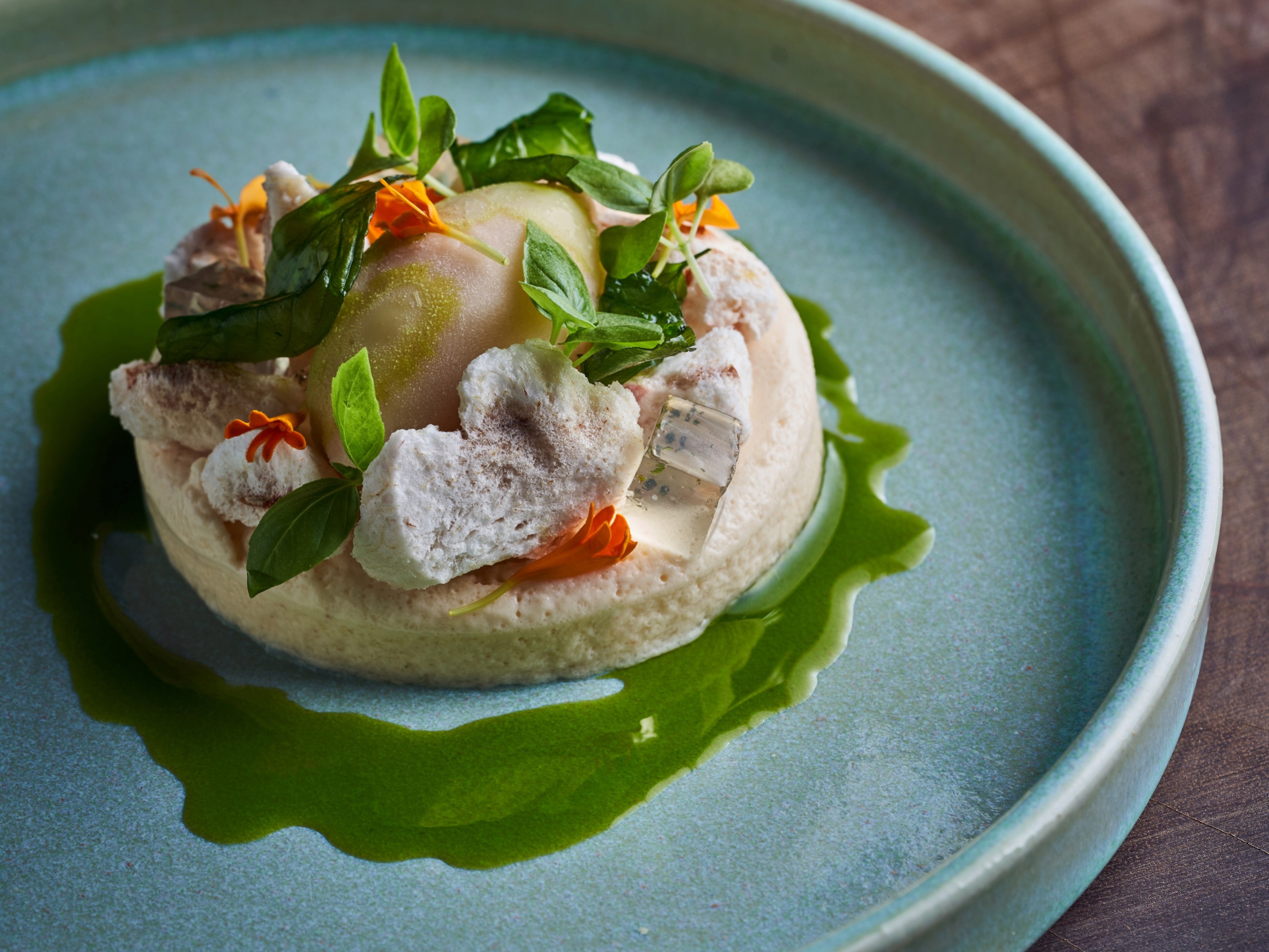 The RuMa Hotel and Residences, a name inspired by the Malay word for home “rumah”, is in turn home to restaurant known as Atas Modern Malaysian Eatery, fast becoming a favourite dining spot in Kuala Lumpur. This one’s given name is a direct translation of the Malay word for ‘upstairs’, but given its upscale reputation garnered in less than a year since its opening, the name is also a nod towards the notion of “atas” in society, that is being fancy, swanky… you know the works.

“My goal isn’t to deconstruct classical or traditional Malaysian dishes but to reinterpret local ingredients and flavour profiles into something uniquely Malaysian.”
Tyson Gee, Executive Chef at Atas Modern Malaysian Eatery
Executive Chef Tyson Gee is the man behind it all. Armed with 14 years of experience in the culinary world, his understanding and appreciation for Malay peninsula flavours is remarkable. Over a conversation with the chef himself, his passion for sourcing fresh, locally grown produce and heirloom ingredients comes through. It’s where his talents shine bright in every bite of his cooking —   familiar, but reimagined as modern and new. Not to mention, ever revolving with seasonal menus.  To date, we’ve seen the inaugural menu with highlights like the salt grass lamb rump and for dessert, the pandan crème caramel with coconut sorbet and peanut brittle. The restaurant has just recently embarked on 2-day-only collaborative experience with another popular and homegrown chef, Melba Nunis, on a very special Kristang menu.

And now, Atas has unveiled its latest menu. With this seasonal exuberance, diners are introduced to “buah keluak”; common in Kristang cooking, as well as 100% Malaysian caviar — it really does exist (if like Chef Tyson, you know where to look). Local chocolate brand Chocolate Concierge even makes a cameo.

The menu, as menus do, spans across categories: snacks, starters, from the charcoal oven, accompaniments (sides) and desserts. Start off with a plate of Pai Tee; here its given a posh upbringing with Malaysian caviar, crème fraiche and chives. On that same level of simplicity and freshness, try the Blue tiger prawn wrapped in betel leafs with charred coconut and sambal — a combination of bitter and sweet notes with the nice softness of prawns.

Then straight from the charcoal oven, we recommend the Salt Grass Lamb Shoulder with Masala pieces and mango chutney, as well as the Charred Grilled Prawns with “bellman” butter sauce, chilli and “ketumpang air”. Just the mention of those individual condiments and flavours is enough to entice. Finish up the meal with the Mangosteen parfait garnished with Thai basil or better yet (and we can’t recommend this enough), the Malaysian favourite: Durian Ice Cream Sundae, holding its spot from the old menu, now enhanced with Gula Melaka and coconut.

“… My goal isn’t to deconstruct classical or traditional Malaysian dishes but to reinterpret local ingredients and flavour profiles into something uniquely Malaysian,” said Chef Tyson. “We’re not trying to redefine hotel dining; we want the restaurant to be a culinary destination within The RuMa.”

At Atas Modern Malaysian Eatery, that definitely seems to be the case. Chef Tyson represents a new era of young chefs and restauranteurs operating on the philosophy that hotel dining especially, need not be the ‘fancy shmancy’ experience were accustomed to. In fact, it can be atas in its own becoming way: with flavours given second, third, and forth thoughts as they come served reimagined into a modern cuisine of its own making.

Sign up to get the latest luxury and lifestyle news delivered to your inbox.
CHEF Atas Modern Malaysian Eatery The RuMa Hotel and Residences
Diandra Soliano
Associate Editor, MY
Diandra Soliano is the Associate Editor of Prestige Online Malaysia. In between morning coffees, long lunches (business, of course), and meeting deadlines over sundown cocktails in the city, you can find her at the yoga studio - or at least she hopes.
Fashion beauty travel Wellness Wine and Dine