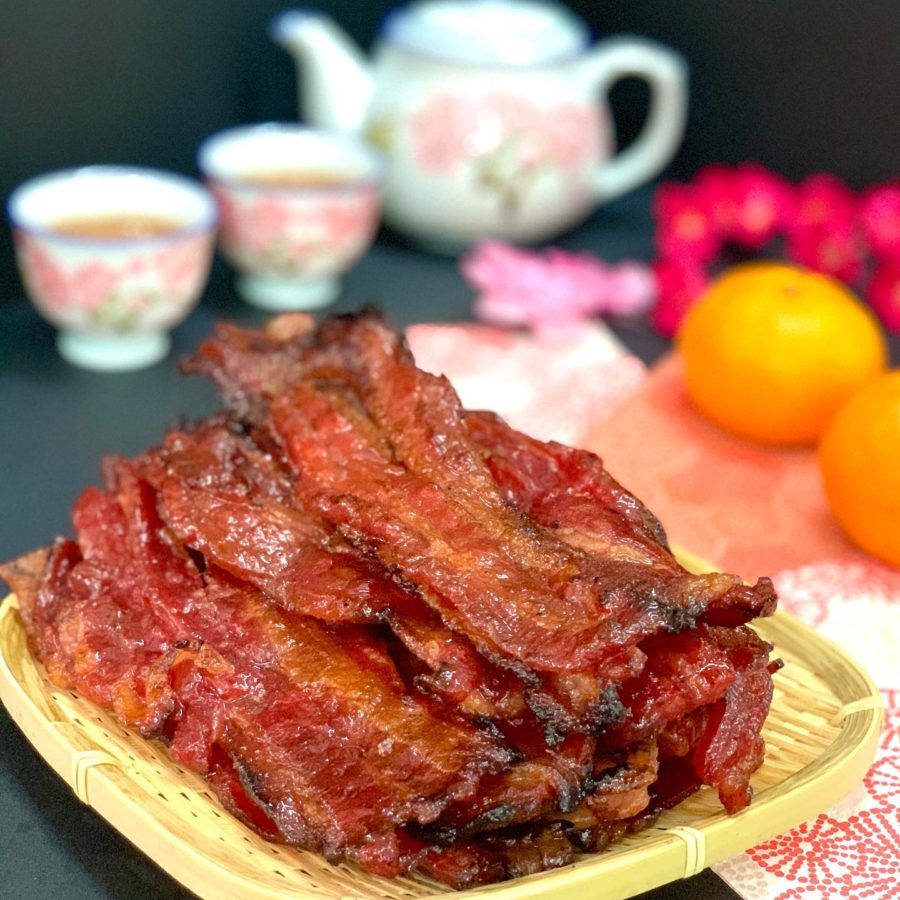 Where can you find the best bak kwa for Chinese New Year?

In lieu of locomoting, you can now purchase them on the ‘net.  The tender slice of meat spiced, smoked and charred to perfection to reveal an irresistible umami flavour and sweet fragrance you can whiff from a fair distance away.

Few have the resolve necessary to turn down when offered. Even the most health-conscious might plan their cheat days around this Chinese delicacy known as bak kwa. Although traditionally made from pork, these days, it is also composed of staples such as chicken, mutton and beef to gourmet creations like truffle-flavoured wagyu and peppered Iberico pork to cater to bourgeois taste buds.

Pronounced “rou gan” in Mandarin or “yoke gone” in Cantonese, this jerky-like delicacy is perhaps better addressed by its Hokkien endearment of “bak kwa” among Malaysians.

Originating from the Fujian province of China, bak kwa is no longer the gastronomic prerogative of Hokkien descendants. It has since been woven into the fabrics of Chinese society in Malaysia. In Kuala Lumpur, the making of bak kwa is publicly exhibited in the Petaling Street locality where grill masters still singe the meat over open fire, creating a visual spectacle that whets the appetite.

While customary reserved as gifts during Chinese New Year, bak kwa’s traditional image as festive offerings has long been shed. You’ll discover it embedded into sandwiches, burgers and toasts, topped with savoury chicken floss, on the menu in numerous cafes and kopitiam throughout KL. You too can make bak-kwa-in-a-bun at home.

This article was adapted from Lifestyle Asia Kuala Lumpur.

With street-fronting shops and mall outlets located nationwide, this third-generation family business traces its provenance to Petaling Street in 1970, where the first outlet still stands. What began as a stall manned by the founder himself along with his wife, their business has since grown into an enterprise employing state-of the-art technology while still steadfastly honouring the recipe perfected by Mr and Mrs Khue. Today, Oloiya is headed by brothers Raymond and Peter Khue. Drop by its headquarters for a taste of its famous Olaiya Toast.

Another bak kwa institution in KL, Loong Kee is ingrained in the minds of many thanks to its catchy jingle along the lines that you’ll be smitten by it from the moment you try. It has been in the BBQ business since 1976 and today, it can be found across major cities in Malaysia. Drop by its unmissable flagship store on Jalan Alor, a street food haven in KL.

A second-generation family business that first started in 1972, Wing Heong still makes its bak kwa by hand, using the secret family sauce to achieve the signature savouriness. Its unique taste is the result of smoking the meat over a bamboo mesh. Its bak kwa contains no added preservatives, meat tenderiser, artificial colouring and flavouring. If being adventurous is on your mind, get its ostrich bak kwa.

Founded in 1978 in Petaling Street, Lim Meng Kee is better known today for its flagship store on Jalan Imbi that sells the decadent lobster bak kwa. A sign that the humble delicacy has truly taken flight, the crustacean signature creation has gained in popularity among foreign tourists – prior to the pandemic. The business is now into its third generation helmed by two brothers.

Established in 1972 on Jalan Imbi, another street food haven in KL, Thin Heong underwent a rebranding exercise in 2009 where it was erstwhile known as Wing Hyeong. While it does offer the traditional bak kwa, which is absolutely top notch, what you should be also getting is its BBQ Honey Bacon. The shop opens daily from 8am till 8pm, except Mondays.

Hailing from Ipoh, Ban Lee Heong boasts over 40 years of expertise in crafting the perfect bak kwa. The secret to its exceptional taste lies in the founder’s insistence on handcraft using fresh meats, prioritising colour, fragrance and taste. It is the intoxicating charcoal whiff that makes Ban Lee Heong the go-to bak kwa brand in Ipoh.

A resourceful man, Mr Chong, the founder of Tuck Kee was already operating out of Penang’s Chowrasta Market as a trader, prior to founding his own bak kwa brand in 1979. He would prepare the meat at home, before selling it later at the market, at first to his family and friends. His bak kwa subsequently amassed a following. His siblings would later chip in to help him construct a shop that stands today on Jalan Kuala Kangsar.

How Chef Nobuyuki Matsuhisa turned Nobu into a culinary powerhouse