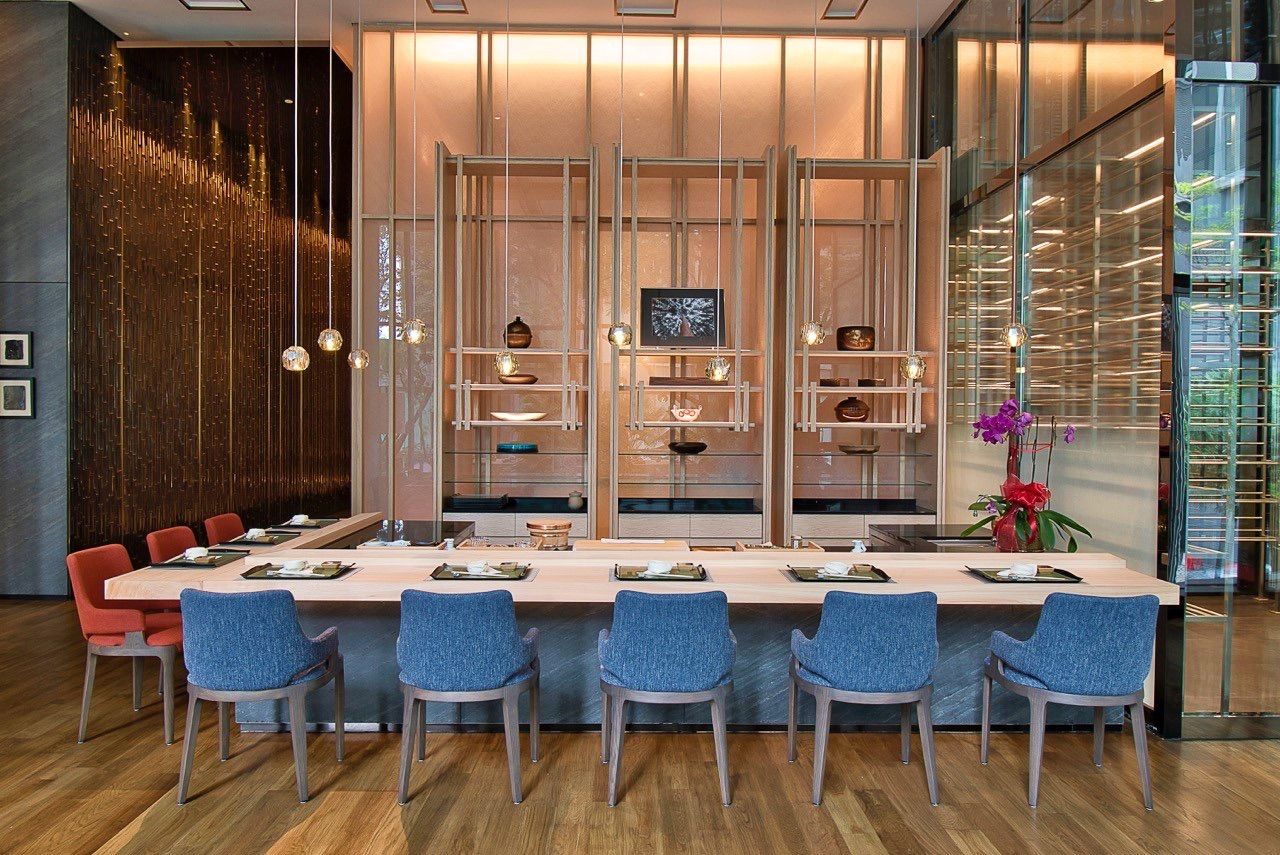 “I’ll leave it up to you.” That’s exactly what ‘omakase’ translates to, a term we hear a lot of in Japanese fine dining. It’s a win-win situation for both chef and customer; the chef gets to flex his creativity and the customer gets to sit back and enjoy a quintessential dining experience.

Kampachi has to be one of the few places to get it absolutely right, and consistently too. The name Kampachi has a cult following in Malaysia since establishing itself as an authentic Japanese eatery in 1969, when it was first opened in the formerly-known-as Hotel Equatorial. Cue an extensive redo of the entire hotel, and we finally have our Kampachi back; bigger and better than ever.

The interior, tableware, art pieces and of course, ingredients, have and are all sourced from Japan. Seafood served comes fresh from Tokyo’s famous Toyosu Fish Market, formerly known as Tsukiji, as well as from Kansai Area. At the centre of it all is the Hinoki sushi counter, the main attraction with seats for a limit of eight guests. Handpicked by EQ’s COO himself, Mr. Donald Lim, the wood is crafted that of a rare 200-year old Hinoki tree. Even more rare, is that unlike most lacquered counter tops, this one is kept bare and naked which allows for its natural scent to exude. So if you see diners around you sniffing the smooth counter tops, join in. Just be careful not to spill any sake on it.

Sushi Master Chef Yang Koh Poh is the man of the hour — lunch hour and dinnertime. With eight years of experience including his time as a Sushi Master in Kampachi’s other outlet in Troika, Chef Yong’s talents are perfectly in sync with the complexity of ingredients used and brings his own ebb and flow to each course.

The omakase menu consists of an appetiser, sashimi, nigiri sushi and maki, hot dishes including the 4-hour cooked seabream soup or tempura of seasonal sweet fish. The menu changes to reflect what’s freshest and in-season in the market, and it takes the skilled hands of a Sushi Master like Chef Yong to masterfully bring out the beauty of dishes prepared in front of you. During our visit, we were served cawanmushi with the juiciest burst of fish roe, followed by deep-fried tempura anchovies, meatier and more succulent than we’ve ever seen. The refreshing fish salad was light and flavourful while the following platter of sashimi was fresh and slightly tangy with lemon. Our favourite surprise of the meal was the dessert, momotaro tomatoes famous in Japan for being available all year round, but more so for its full-bodied flavour that’s sweet enough to devour as an all-natural sugary treat.

Kampachi offers three choices of the Omakase Sushi Set starting from MYR125 nett and lunch and MYR 400 nett for dinner.