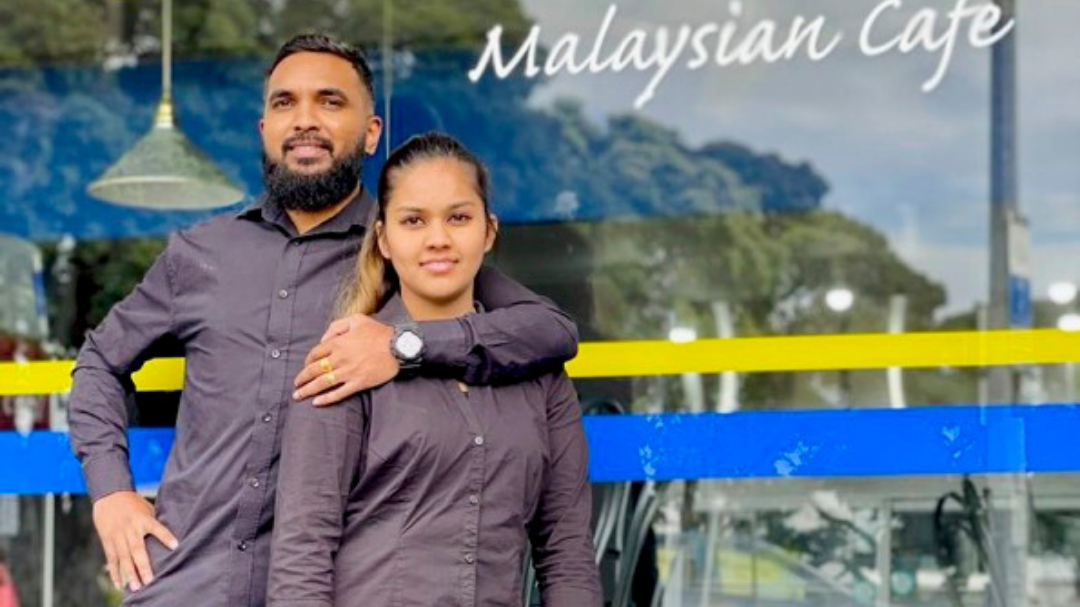 “I always like to think big, but start small,” says Robinson Annadas, a barber turned restaurant owner now living in in New Zealand. Annadas and his wife, Amanda, run an eatery called Kedai Mamak in Auckland.

Born and raised in Kulim, Kedah, Robin (as he’s known as) moved to Singapore at the age of 18 where he worked cutting hair. After seven years of working, he had saved enough money to open his own barber shop in Johor Bahru, sharing that he enjoyed the challenge of being his own boss and enjoyed the fruits of his labour.

Then in 2014, he decided to try something new again — “my lifestyle, work environment, and country,” he says. “I landed in New Zealand with a working permit, but without really knowing where I would go.”

He began working as a barber at first, “even tough life was tough, but having a dream of a better tomorrow always pulled me through”. Especially, he says, when he often felt down in his first year living in New Zealand.

2018 would turn things around for the young entrepreneur. Soon after being granted his permanent residency (PR), he started his second barber business in Sandringham, a local suburb in central Auckland — which he still has today. Since then, he’s even opened a few more barber shops.

As all Malaysians do when away from home, Robin says he missed authentic Malaysian Mamak-style food. “My mum ran a Mamak restaurant in Kedah while I was growing up. I missed having that sort of food for breakfast, lunch, and in fact, all the time,” he shares.

The opportunity to flex his entrepreneurial skillset again came when the cafe space next to his barber shop in Three Kings became available. “I took up that challenge and decided to pursue my dream of opening up a Malaysian Mamak styled café in Auckland.”

A new kid on the block only recently in April, the restaurant has fast become a hit with its diverse daily specials and affordable prices. Robin tells us that locals in New Zealanders who travel a lot are already very familiar with Mamak cuisine. “It would be amazing to see more and more people in New Zealand fall in love with Malaysia Mamak cuisine,” he says of his goals as a new restauranteur.

He shares more on his inspiring journey for the latest interview in our series of Malaysian Restauranteurs Abroad:

Tell us more about opening up Kedai Mamak in Auckland.

The early days proved to be very challenging while we were learning about local council food business standards and compliances. With the help and encouragement of my supportive wife, Amanda, as well as my friends, we managed to get through all the hurdles one by one.

There was a disheartening experienced I had early on. I received a threat from a fellow Malaysian running another mamak-style eatery in Auckland. Instead of wanting to see fellow Malaysians doing well together in foreign land, we have received, from our ‘own’ people, this sort of treatment which was totally uncalled for. Fortunately, this negativity was at a minimum and the support we received from the general public was overwhelming.

Among those dishes, Nasi Lemak, Kueh Teow Goreng, Kari Ikan, Kari Kambing, Ayam Madu and Teh Tarik are definitely the crowd favourites. Ikan Pari is a pleasant surprise to some customers too.

How would you describe Mamak cuisine to first-time customers?

Malaysian cuisines consist of traditional dishes that reflect our country’s multi-ethnic make-up. I am very proud and honoured to be able to bring Mamak styled food to the people of Auckland at a very affordable price.

How has the Covid-19 pandemic affected business?

Here in New Zealand, we are currently in a level 4 lockdown. It is challenging for all, including our team as we can’t open our restaurant but still have fixed operating expenses to pay for. Thankfully, we do have financial assistance from the New Zealand government, such as employee salary subsidy. The financial aid may not be much, but anything received right now helps in a time like this. We do appreciate the help and support we are receiving during this difficult time.

Lastly, can you share a Merdeka message for Malaysians all around the world?

My family and I would like to take this opportunity to wish every Malaysian — local and aboard — a very Happy Merdeka Day. We can do anything when we put our minds into it, with hard work, determination, and commitment. Malaysia Boleh!