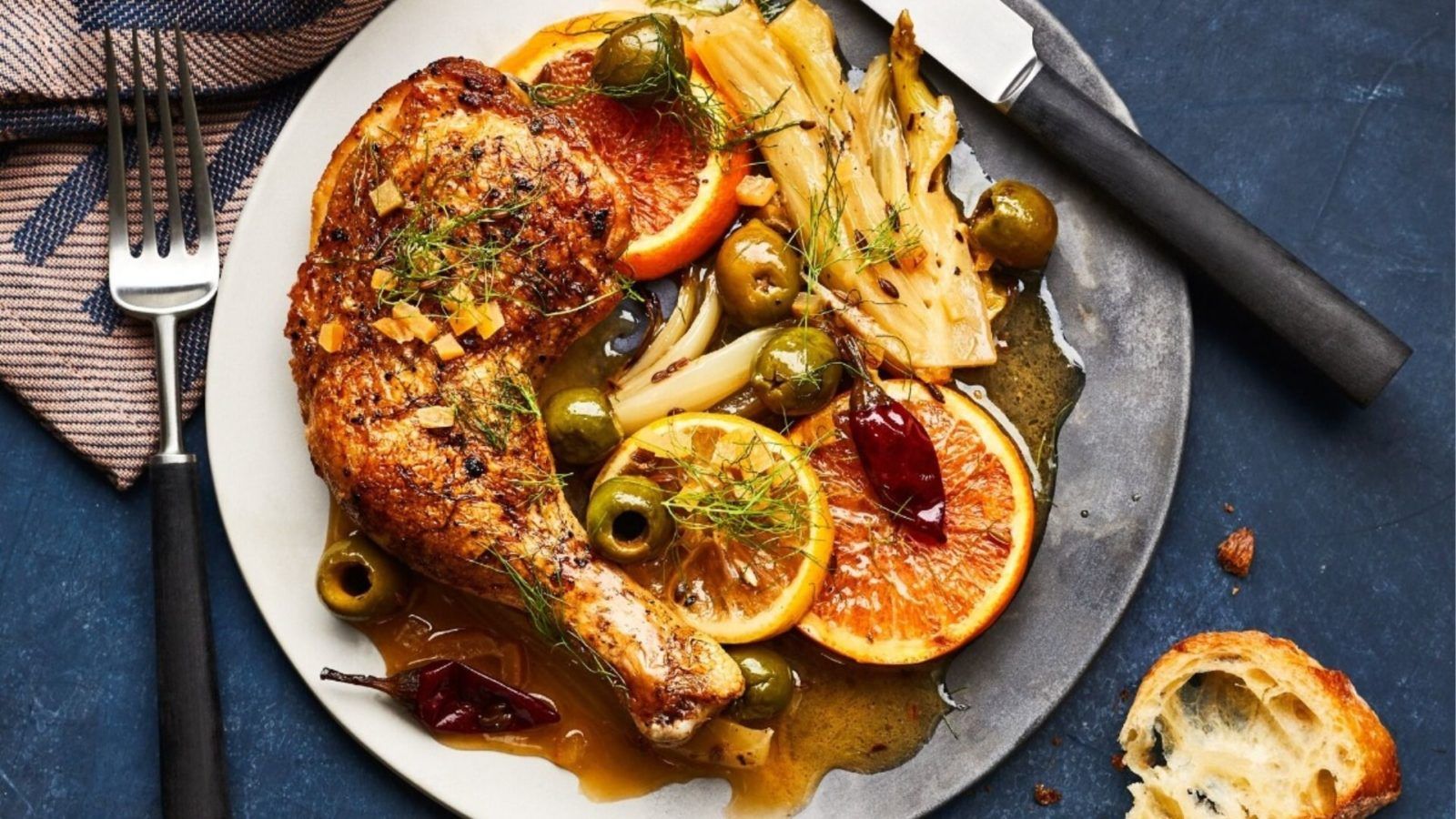 We love braises in all of their forms, from braised beef with tender homemade noodles to the aromatic dish of braised sausage and fennel. They’re satisfying, comforting, and full of flavour. And on an episode of Mad Genius, Food & Wine Culinary Director-at-Large Justin Chapple adds another winner to the list — his recipe for citrus-and-fennel chicken with olives and Calabrian chillies.

It may sound complicated due to the longer title, but rest assured, this braised chicken dinner recipe is pretty straightforward to make.

“With just a few ingredients and the help of our oven, we are going to have a delicious, show-stopping dinner,” Justin says.

Here’s the gist: you brown chicken legs in a pan on the stovetop, add a bunch of aromatics like sliced orange and lemon to the pan, braise them, and then let everything cook in the oven for roughly an hour. The end result is a flavour-packed meal that goes beautifully with a torn baguette and a spicy Calabrian red wine — which is especially fitting, since Calabrian chillies make an appearance in the dish. If this dish sounds up your alley, keep reading for Justin’s method.

For this dish, you’ll need four 12-ounce chicken leg quarters, patted dry. Season them on both sides with kosher salt and black pepper while you heat extra-virgin olive oil in a 12-inch skillet. Justin notes that it’s important to use a 12-inch pan so all of the ingredients can fit—if you don’t have one, use a Dutch oven or a large saucepan instead (and make sure whatever you use is oven-safe!).

Add the chicken legs to the oil and cook them over medium-high, turning them occasionally, until they’re nice and golden brown on both sides. Then, take them out of the pan and transfer them to a large plate.

While the chicken browns, Justin preps the fennel, Cara Cara (or navel) orange, lemon, and garlic. You’ll need both the fennel bulb and the fronds—cut the bulb through the core into 3/4-inch-thick wedges, and set the fronds aside for garnish. As for the citrus, you’ll need four 1/2-inch-thick slices of each. The thicker cuts will prevent them from disintegrating during the braise.

Finally, cut the garlic head in half crosswise. Add the two halves, cut-side down, to the chicken drippings in the pan for about 30 seconds, letting them cook undisturbed until they are lightly browned. Then remove the garlic from the pan and add it to the plate with the chicken so you can start building the braising liquid.

Next, take the pan off the heat and add the fennel seeds to the chicken drippings, allowing them to toast for 30 seconds (stir constantly while this happens). At this point, it’s time to add all of the liquid—low-sodium chicken broth, dry sherry, and some reserved brine and oil from the Castelvetrano olives and Calabrian chillies, respectively—as well as the rest of the salt and pepper.

Stir everything together with a wooden spoon and scrape up the browned bits from the bottom of the pan.

Once you’ve got your braising liquid, add the chicken. Arrange the legs skin-side up in the pan, and then add in all of those aromatics, tucking the lemon and orange slices, fennel wedges, and two garlic halves around the chicken. Finally, sprinkle on the pitted Castelvetrano olives as well as the whole Calabrian chillies.

Bring the liquid in the skillet to a boil over medium-high, and then cover the pan tightly—either with a lid or with aluminium foil—and get it in a preheated 375°F (190°C) oven. The chicken will cook in two stages—first for 35 to 40 minutes, until a thermometer inserted in the thickest portion of the leg reaches 130°F (54°C), and then uncovered for another 15 to 20 minutes. After this stage, the chicken should register 165°F (73.8°C) and the fennel should be tender.

Once the chicken is cooked, all that’s left to do is garnish it with the finely chopped preserved lemon peel and the fennel fronds. Then, plate the chicken and fixings, grab a baguette, and go to town.

“It’s literally all flavour in my whole mouth,” Justin says after trying the dish. “All of it. Gosh, that chicken is good.”

This story first appeared on www.foodandwine.com.