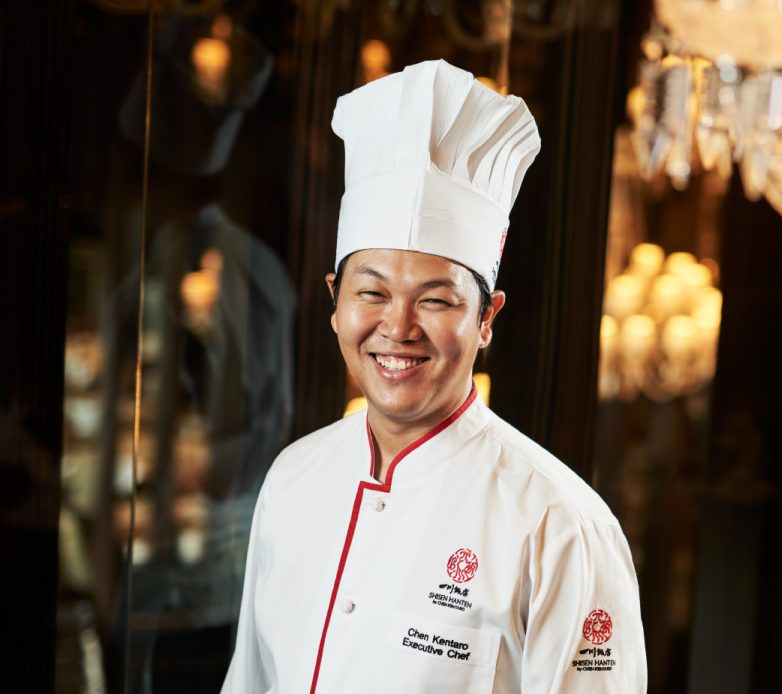 When it comes to knowing the ins and outs Sichuan cuisine, few can compare to the skills of Chef Kentaro,  the head honcho behind Singapore’s highest Michelin-rated Chinese restaurant for two years running, Shisen Hanten. Some might even go so far as to claim that Sichuan cuisine runs through Kentaro’s veins seeing as his grandfather, the late Chen Kenmin, was lauded as the “Father of Szechwan cuisine” in Japan; while his father, Chen Kenichi is best known for his role as the “Szechwan Sage” on the hugely successful Iron Chef television series.

Our favourite father and son duo is back! For one night only, sample a specially curated menu by the duo and be entertained with a mystery box challenge by the two culinary legends. Enjoy specials such as Stir-fried seafood with Szechwan pepper, Shisen Hanten speciality Japanese dry abalone, and many more!

The rising star in Asia’s culinary scene is also the Culinary Ambassador of Yu Kitchen, a newly opened sister outlet of the Malaysia’s renowned Oriental Group of Restaurants. Located in Melbourne, it was here that Chef Kentaro first met the group’s Executive Chef James Ho, and the two immediately bonded over their love for good food.

A few months after that fateful meeting, the chefs would soon find themselves working side-by-side to present an exclusive dining experience that showcases the best of Sichuan and modern Chinese cuisine. Held for three nights only, the official launch took place within the chic halls of the modern dining establishment Ruyi & Lyn, where throngs of hungry diners converged for an unforgettable gastronomic experience.
The feast began with the arrival of the appetisers, a mix of mouthwatering morsels that are sure to please even the pickiest of palates. Not to be missed was the steamed bean curd balls with glutinous rice topped with finely sliced spring onions and served with a side of julienne ginger doused with light soya sauce for dipping; and generous chunks of pineapple paired with huai shan, a wild Chinese yam renowned for its medicinal properties. This perfect balance of sweet and savoury came served in a hollowed pineapple that had been set alight for an extra dramatic touch.

Next up was the mains featuring signature creations, with each dish demonstrating the distinct techniques and regional recipes that had been mastered by both chefs. Colourful, fresh and packed with seasonal flavours from the orient, the culinary creations presented by Chef James included succulent Boston lobster served with a flavour-packed sauce infused with Martell Cognac; and tender chicken wings generously stuffed with bird’s nest jelly before being baked to perfection.

As for Chef Kentaro, the award-winning chef had prepared two special surprises for diners who had travelled near and far just for a taste of his Sichuan specialties. The first indulgent dish was a creative take on the traditional Japanese appetiser known as chawanmushi. Adding to the taste of this silky smooth Japanese egg custard was a rich blend of foie gras and shredded crab, making each mouthful an absolute joy to the tastebuds.

Fuel your appetite with MICHELIN Guide Singapore’s GastroMonth offers. Enjoy a 5-course lunch menu at Shisen Hanten for only $78++ per person. Head over to our bio to book now.

But the true highlight of the evening’s menu was undoubtedly the simple-yet-hearty mapo tofu. Served on a bed of warm fragrant rice, this classic Sichuan dish was enhanced with glorious chunks of sweet crab claw meat, served with a side of crispy fish skin and pickled ginger. The sweetest surprise came towards the end as the waiters brought out plates filled with classic Portuguese egg tarts, an addictive flaky treat with a creamy custard centre; followed by a refreshing green apple dessert with gelatinous snow jelly and mixed fruits, a perfect sweet ending to a satisfying feast.