“It’s a real honour to announce this new project, which is a tribute to Louis XIII’s long-standing relationship with Time,” says Leonardo Ferracina, Global Executive Director of Louis XIII Cognac.

“We are very proud to be working with three incredibly talented women. Believe in Time illustrates how great artistry has the power to cross cultural boundaries to create a piece of art never seen before. We hope to inspire people with a positive and creative message.”

With the release of the new Louis XIII cognac art film, an expression of tribute to Mother Earth is beautifully depicted through the story, music and choreography of Solange Knowles, film direction of Mati Diop and the craftmanship of Guo Pei. Together they brought to life a message etched in this art film: Believe in Time.

“When I first experienced Louis XIII, I was absolutely fascinated by the brand’s history which had been made possible by a legacy passed down from one generation to the next… this deeply touched me. It triggered my understanding and perception of time. For humans, time is the most important, and as an Haute Couture designer time is a cornerstone. My design focuses on the description of my life and my passions, which developed over time, by trying to make people feel moved and touched by this relationship to time which Louis XIII beautifully embodies. It is as if we can take part in this eternity thanks to Louis XIII!” Guo Pei enthuses. To understand the artistic elements from Guo Pei, it is vital that the Chinese couture designer walks through the blueprint of her couture art piece that essentially intertwines Louis XIII Cognac with Mother Earth.

“Couture means eternal design,” says Guo Pei, who was inspired by Mother Earth’s complexion, frame and aspirational energy. Sourcing materials that represent natural elements, this art piece is brought to life. She believes that a person’s life is the most precious treasure. “And life is time.” 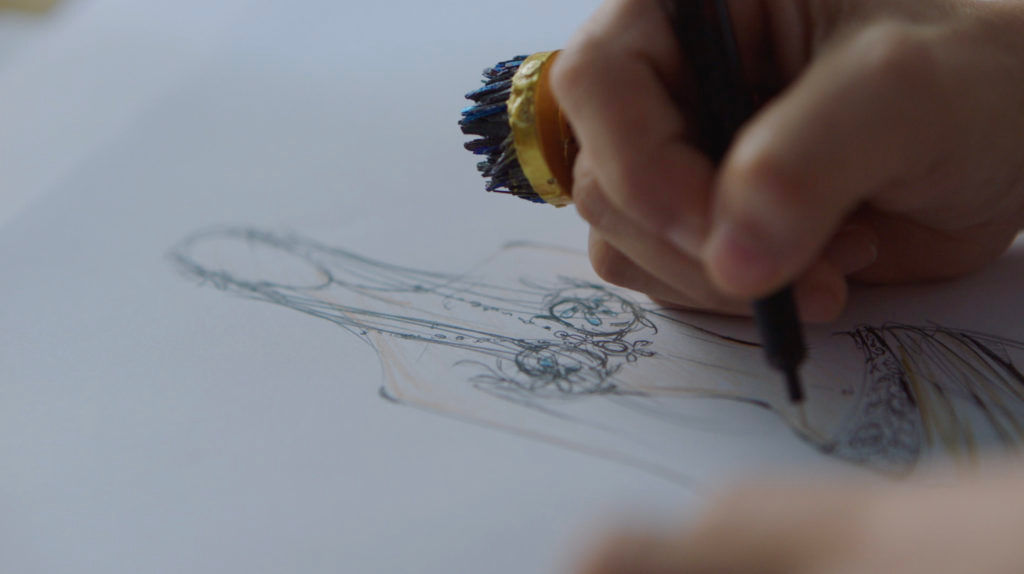 Guo Pei creates the bodice with tourmaline gemstones. “The stones, gems or rocks are actually her bones,” explains Guo Pei. She views them as the most powerful and most energetic part of Mother Earth. With deep blues, greens and golds, the gemstones are luxuriously shaped into rattan patterns. True to Guo Pei’s description of the rattan patterns, it is delicately wrapped to create the final shape of the bodice. “The rattan patterns are like growing vines wreathing into the body of Mother Earth.”

To emulate sunrays, Guo Pei selects fabric that emits the same shine. With intricate gold and silver threads woven in the fabric, the skirt creates a glimmer that mimics the complex yet familiar rays of the sun, adding warmth to the design.

“What I imagined was that Mother Earth should be holding a globe in her hands,” explains Guo Pei while cupping her hands together. The designer also mentions that the creation of the globe was an experiment that took the most attempts but through those experiments, it became her favourite piece.

Reminiscing her first encounter with Louis XIII Cognac in Paris, the designer describes her amazement as she watched the rich colours as it was being poured into the crystal glass: “absolute beauty”. Selecting a colour to represent the aura, Guo Pei thought it fitting to have a meaning that carries light, energy, life and time. With that, the aura releases a beautiful luxurious gold.

As a result from these artistic elements brought together, the campaign portrays a sensitive and emotional part of the cognac. The Louis XIII Cognac is on its own a representation of eternal legacy that assures quality, artistry and beauty. It believes in a time that produces quality.

This story was first published in Prestige Malaysia’s Women of Power issue. To read it along with the May 2022 issue, pick up a copy in store or subscribe on Magzter.