Here’s what we really think about the Hermès Beauty lipsticks Travel
Check in to a home away from home
People & Events
Fighting COVID-19: Interview with Dr Ganesh Ramalingam
Style
Dior is now manufacturing masks from its Baby Dior atelier
People & Events
Bvlgari CEO Jean-Christophe Babin tells us what the future of luxury will be post COVID-19
Sign up for our newsletter to receive the hottest news on beauty products, health topics and wellness experiences.

Hermès has delved into a new métier: The world of luxury cosmetics. Its foray into beauty has kicked off with a lipstick collection.

Twenty four shades — a number deliberately chosen as an homage to its iconic Parisian address — is the core of its line, and it’s called the Emblematic Collection. Ten of them are matte, while the other 14 are satin. Approached as objets d’art, they’re described as “an object for the senses, for the eyes, and for its feel on the lips”. It’s luxury in a lipstick. Each tube is deliciously weighty, and has a magnetic closure as a “simple, intuitive gesture” for the user. On the cap, a gold ex-libris seal is engraved.

Texture-wise, the lipsticks are described as akin to a leather finish. Specifically, they boast the powdery feel and soft appearance of Doblis leather, and mirror the smooth sheen of calf skin. Velvety and smooth, the lipsticks contain extract of white mulberry, often used in the silk world, combined with beeswax wrap lips in a sensual, weightless feel. As a further luxurious touch, the nose behind Hermès, Christine Nagel, has created a scent bolstered by notes of sandalwood, arnica, and angelica.

“Like a silk scarf gracing a woman’s neck that creates radiance and reveals her beauty, for Hermès Beauty, we wanted to rediscover the emotion of colour as a fundamental feminine trait.” The colours take inspiration from the silk metier, which encompasses 75,000 shades in its Lyon archives. The hues range from Beige Naturel, a tanned, soft and flattering beige, to the violet-hued and darkened, smoky purple of Rose Zinzolin. Its signature colours include Rouge H, an ode to the Rouge Hermes, a colour introduced by EmileHermès in 1925 as the house’s first signature leather colour; Rouge Casaque, a luscious and sultry red that evokes the Kelly in Clemence bullcalf, as well as the Orange Boite, the colour of the house’s signature and emblem.

The lipsticks are packaged in refillable, colour-blocked tubes and crafted from brass and permabass, the same materials you’ll find in the hardware of its handbags. Its finish is distinguishable by a matte or shiny label on its case. These are encased in pop-up cases made from Madame Calfskin and boasting impeccable corner stitching.

“I like the relationship a woman cultivates with herself when she applies makeup… I see this beauty ritual as an essential gesture. Simple, meticulous, everyday and precious. A gesture that is naturally in keeping with Hermès’ idea of beauty and the art of living” 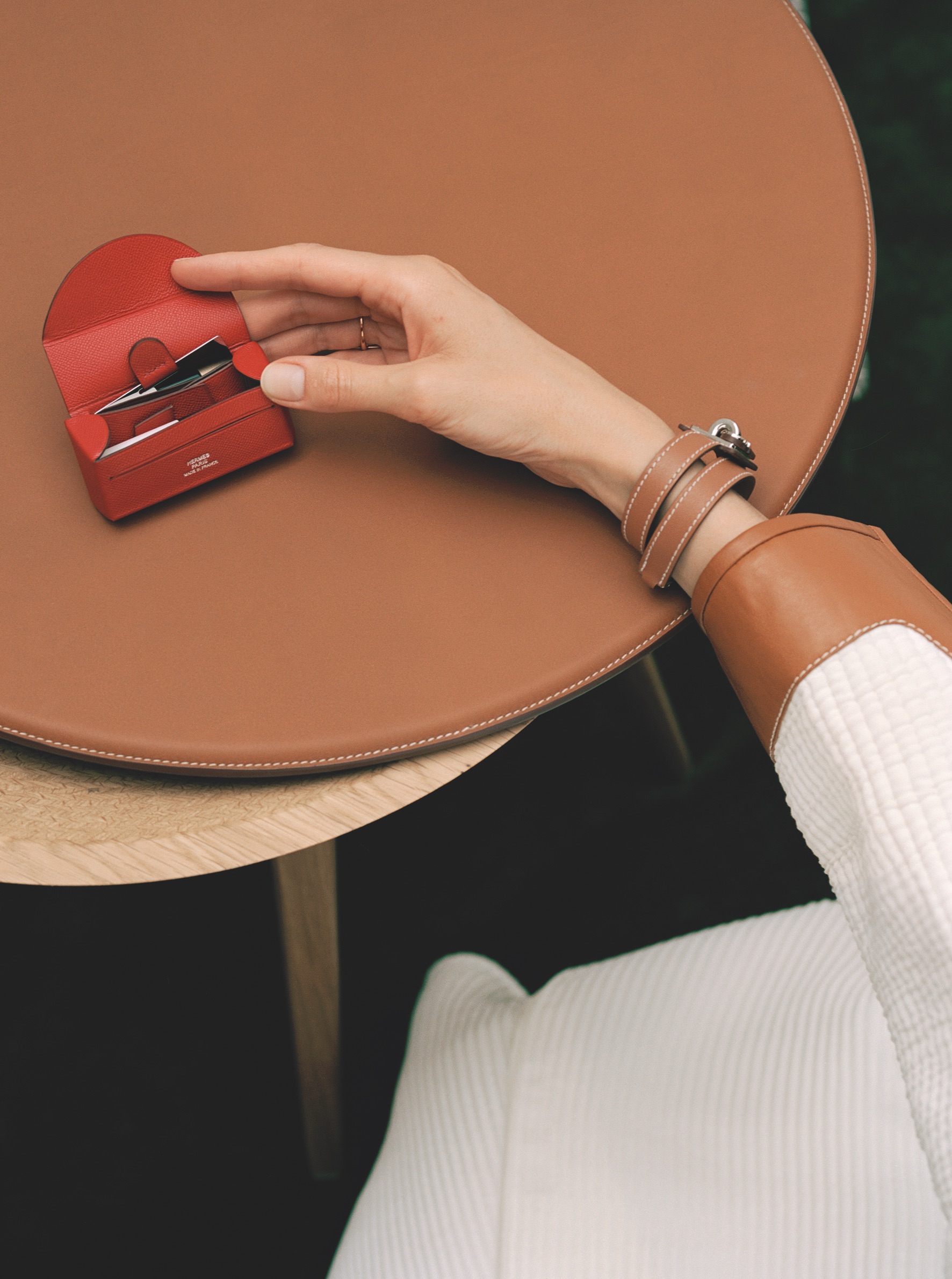 And then there are the limited edition lipsticks of the Totem collection. The three shades — the Violet Insensé, Rose Inouï and Corail Fou — are intensely pigmented. For those looking for a subtle sheen, the Poppy Lip Shine appears intimidatingly orange in the hue, but applies luminous and sheer with mother-of-pearl micro-particles to deliver radiance. The Lip Care Balm is, as its name suggests, a mega hydrating boost. Accessories to the lip collection include a hand-laquered wooden lip brush and a lip pencil with a second-skin texture in a transparent shade. From what we hear, more soon will be added to its beauty range, including face makeup and skincare.

All images are courtesy of Hermès

hermès
hermes beauty
Nafeesa Saini Associate Online Editor
Nafeesa covers a spectrum of beats, notably beauty, travel, and fashion. She constantly has an unpacked suitcase for her next adventure and five lipsticks to keep her prepped for industry events. When not writing, she enjoys sipping coffee or cocktails — sometimes simultaneously.
Talk to Me About:
travel
beauty
Wine and Dine
Women's Fashion
Wellness
culture