AMALIA WIRJONO: A Sense of Balance 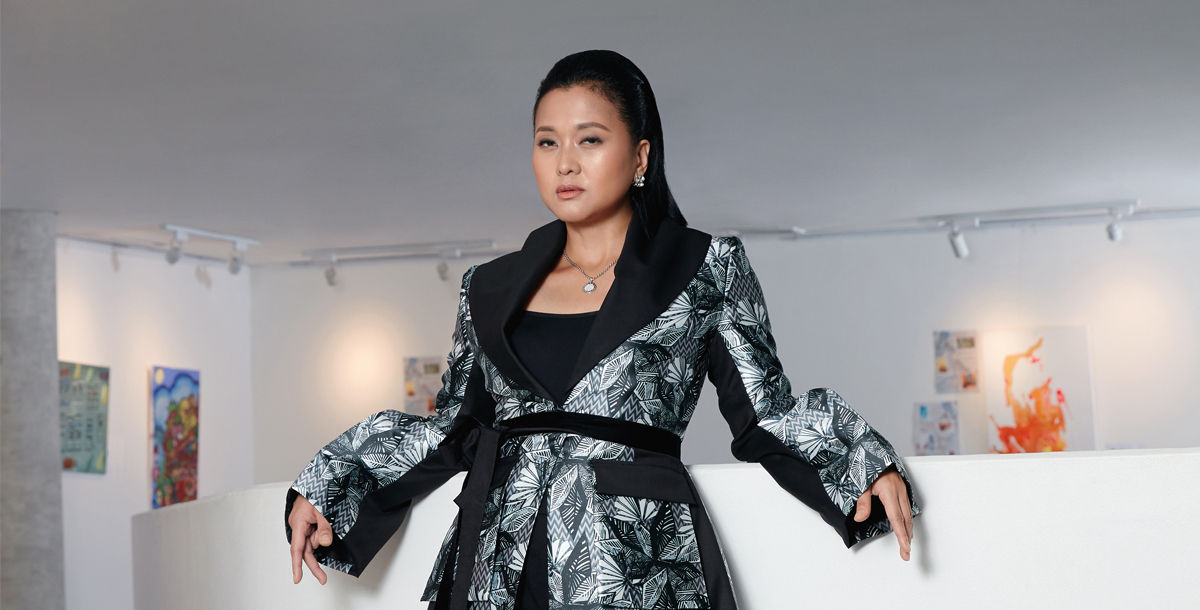 For most of us, art is a luxury. It’s not something we think about much in our busy daily lives. But it’s not that way with people like Amalia Wirjono. For this entrepreneur, a passionate promoter of contemporary Indonesian artists, life is unimaginable without art. She lives and breathes it.

Sitting in the Eddie Hara cartoon art-decorated ROCA (Restaurant of Contemporary Art) at Artotel Thamrin one Thursday afternoon in April, Amalia ponders a question: What percentage of her time does she spend on art and how much on other things?

“I really don’t think of it that way,” she tells us, after a pause. “I work with art 24/7. It never stops! Of course, you must love art to do all the things and the travelling I do. Otherwise, it would be a burden because it’s so intense. But I love every minute of it.”

After receiving her Bachelor degree in Business in California, Amalia returned to Indonesia and went on to open Koi Gallery & Restaurant in Kemang. One of the first of its kind back then, Koi was a free-standing restaurant and gallery that grew in popularity among the in-crowd for an alternate dining experience from the usual hotel’s dining which was the norm at that time.

“Art is my first and eternal love,” said Amalia, who is a long-standing member of the Board of Trustees of the Kelola Foundation, a non-profit organisation that supports the growth of the arts in Indonesia. “There is never a ‘full stop’ when I think of art. There’s always something new to discover, something that you want to question or know more about. That’s my relationship with art, I think it’s so fascinating.”

A big part of Amalia’s work these days is her role as a representative of some of the world’s most important art fairs held in Europe, the US and Asia. As the representative for South East Asia who oversees countries including Singapore, Malaysia, Philippine and Indonesia, she networks with private collectors, museum directors and curators, art advisors and internationally known artists.

Also visit: What’s Inside our May Issue!

Once the Indonesian Representative for Christie’s, where she spent five years, and Sales Director of Gagosian Gallery, a position she held for two years, Amalia is proud to be associated now with international fairs.

She goes on: “Three years ago, when they approached me, I was ready to take on the challenge. It was an interesting move for me after all the experience I had gained with Christie’s and Gagosian. I think I have been privileged to work for some of the best organisations in the art business, including a great auction house and the biggest contemporary gallery with spaces in New York, London, Paris, Beverly Hills, San Francisco, Rome, Athens, Geneva and Hong Kong.

The move she made came at an interesting time, just when Hong Kong was becoming an important hub in the world art scene. Representing the best of the best, Hong Kong was a magnet where people come to see and be seen, attracting and connecting the best museums, art dealers, artists and collectors. Naturally, that made Amalia’s role in Asia, became an important one.

Busy as she is, juggling a career and family life, Amalia somehow finds the energy and time to work on various projects. Currently, she has been working on a book about the studios of Indonesian artists. “Among the most important things I want to share are the places where these remarkable artists work,” she told Prestige in a previous interview. “This is a big project that I’ve been doing for some time with three partners.”

Amalia is also the founder of the Art Dept ID, a platform to promote contemporary Indonesian art to the young generation and the general public. “I want to expose more people to the art scene by making it a part of daily life.” Art Dept ID promotes and sells art merchandise through online, pop-up stores and select locations such as at The Goods Dept (which is founded and run by Amalia’s siblings).

Through Art Dept ID, Amalia also hopes to introduce more local artists to the general public, in the spirit of making art reachable to the masses, “I think it is really important that we support these talents and give them the recognition they deserve. For collectors, everyone should get to know their artworks – the stories behind them, the artists who make them,” she adds, “Art sometimes can’t be understood, but we can always appreciate it and the process behind it.”

She goes on: “One great thing about my work is that I get to go to places I would probably not otherwise visit.” Last year, for example, she visited Kassel in Germany to attend Documenta, an exhibition of contemporary art that takes place every five years. The show was founded in 1955 as an attempt to bring Germany up to speed with modern art after the defeat of Nazism. The first show featured works by Picasso and Kandinsky. Each Documenta runs for 100 days.

Documenta rarely coincides with other major art world events. But by coincidence, last year’s show took place simultaneously with the Venice Biennale and Skulptur Projekte Münster. Adding to the excitement, the show in Kassel was preceded by the inaugural Documenta Athens.

“What a busy year 2017 was,” laughs Amalia. “The great thing about exhibitions like the ones in Kassel and Münster is that they aren’t just intended for a few aficionados. They’re a big deal for the whole community. The entire city celebrates it, and everyone in the art world goes to it. It’s so inspiring.”

In her very first cover shot for Prestige in August 2004, our second issue, Amalia wore a red Hermès top. She described the image as Frida Kahlo-inspired. Says the mother of two, Xavier and Alexia Pramesti: “Art is a passion, and it’s fun. Living in Jakarta is so stressful these days – just look at the traffic! But art brings me a sense that there is a balance in everything. Given all the seriousness in my life, I try to do things that make me happy.