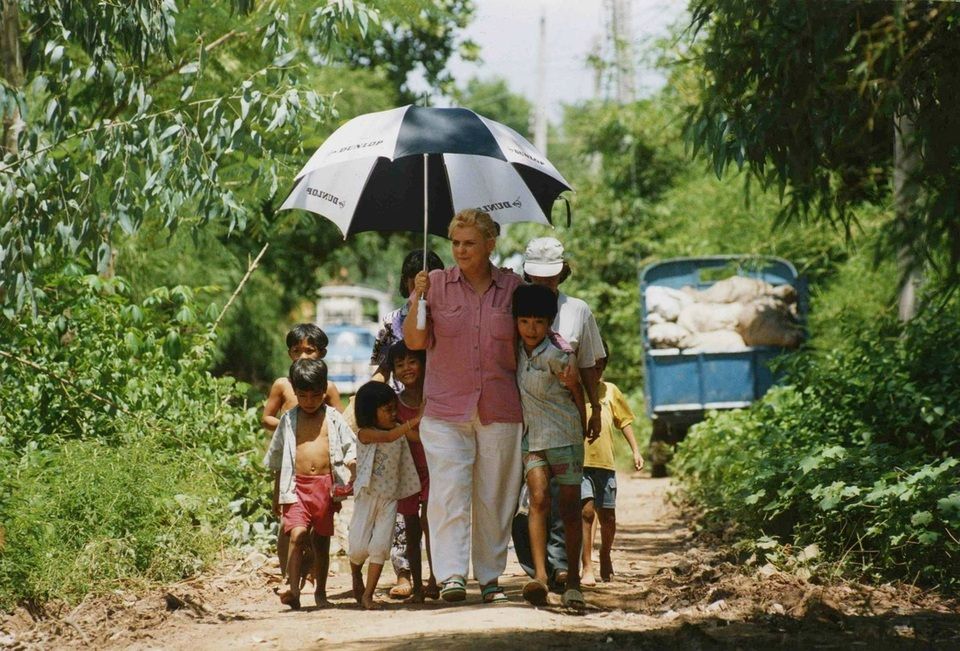 The early life of Christina Noble played out like a sickening nightmare. She loses her mother when she was ten, and is sent to an orphanage and made to believe her siblings have also died. After she escapes, she lives on the streets of Dublin, sleeping in parks like she did when her mother passed, and was violently gang-raped. Eventually, she married and had three children, but fell victim to domestic violence.

But Noble’s sunny disposition betrays nothing of her long suffering. “I could’ve told you some things, but I won’t, okay? Some things you don’t speak about,” she tells me. Quick to draw attention away from her life and hardship, the founder of the eponymous Christina Noble Children’s Foundation excuses herself: “I’m not important… It’s about the young children.”

The children’s rights activist was in Singapore this month for International Women’s Day as a keynote speaker for the 4th HSBC Women Leaders’ Forum. “I remember what it was like to be excluded,” she said. “It was like being hidden from society. No matter who knocks you down, keep getting back up. Love one another and never reject another person; the only way is up.”

Noble’s foundation supports vulnerable children across Vietnam and Mongolia with long term shelter and direct access to education, healthcare, and opportunities for employment and social inclusion. In Mongolia, for example, the foundation established the Blue Skies Ger Village on the outskirts of Ulaanbaatar for orphans and street children, supported by visits from the foundation’s doctors several times per week. In Vietnam, the foundation has set up schools with several programs dedicated to education, arts, music, sports, and more.

Sometimes Noble breaks into song. Memory by Cats, then ABBA’s I Have a Dream. “I believe in angels… Something good in every child I see.” She winks during the subtle lyric change. Music had always been a therapy for all her hardships, a respite she tries to pass on to the children. “They have what every other child has, a normal life. No institution, no pretending, no telling them to smile.”

Noble smiles fondly at a memory. “The children see me as just ‘Mama Tina’. They gave me that name, two little girls, Huong and Hang. I said, I’m just your pal, okay? They said, no, Mama Tina. They’re so amazing, children,” she coos. “And they grow up to be amazing young people. Some married, with their own family, a good job. That’s what it’s about – love.”

Her daughter, Helenita Pistolas, who is CEO of the foundation, explains their more holistic and grassroots approach. She emphasises on the importance of providing a family unit for their Child Sponsorship program, “We work with the child as an individual and always within the context of the family and the community whenever possible. You can’t help a child unless you’re prepared to help the family unit; something my mother felt extremely strongly about from day one because of her own background.”

SEE ALSO: WHEN C-SUITES GIVE BACK: Pearlyn Phau Offers A Wealth Of Compassion

Pistolas explains how this approach promotes an eventual self-sufficiency for the child. She says, “We’ve found that once you include the family unit, they are able to look after the children themselves. It’s not sustainable if we invest in a child but the family unit… We’ve never been involved in adoption or anything like that. We focus on health too, which is important for education and productivity. We’re also very big into arts, music, sports, and that’s very important for the emotional and social development of the children as well.”

Pistolas muses that the children keeps them going through tough times: “When you see them come to you like broken little birds, their soul sucked out of them, and their trust in humanity gone. Then you see their resilience – how these little ones fight back – it’s inspiring. They can trust again, and when you see them flying off really strong, that is our fuel to keep going.”

“Children are the most incredible inspiration. Not just children we work with, but children, full stop. They have no judgements, no borders, no boundaries, they’re accepting, they’re embracing, and you know, we can learn a lot from children. All of us. You just have to watch children, and how they interact with one another. It’s as if we as ‘Big People’, could focus on that much more, the world would be a much happier place.”

SEE ALSO: WHEN C-SUITES GIVE BACK: Pierre Lorinet Builds A Solid Foundation