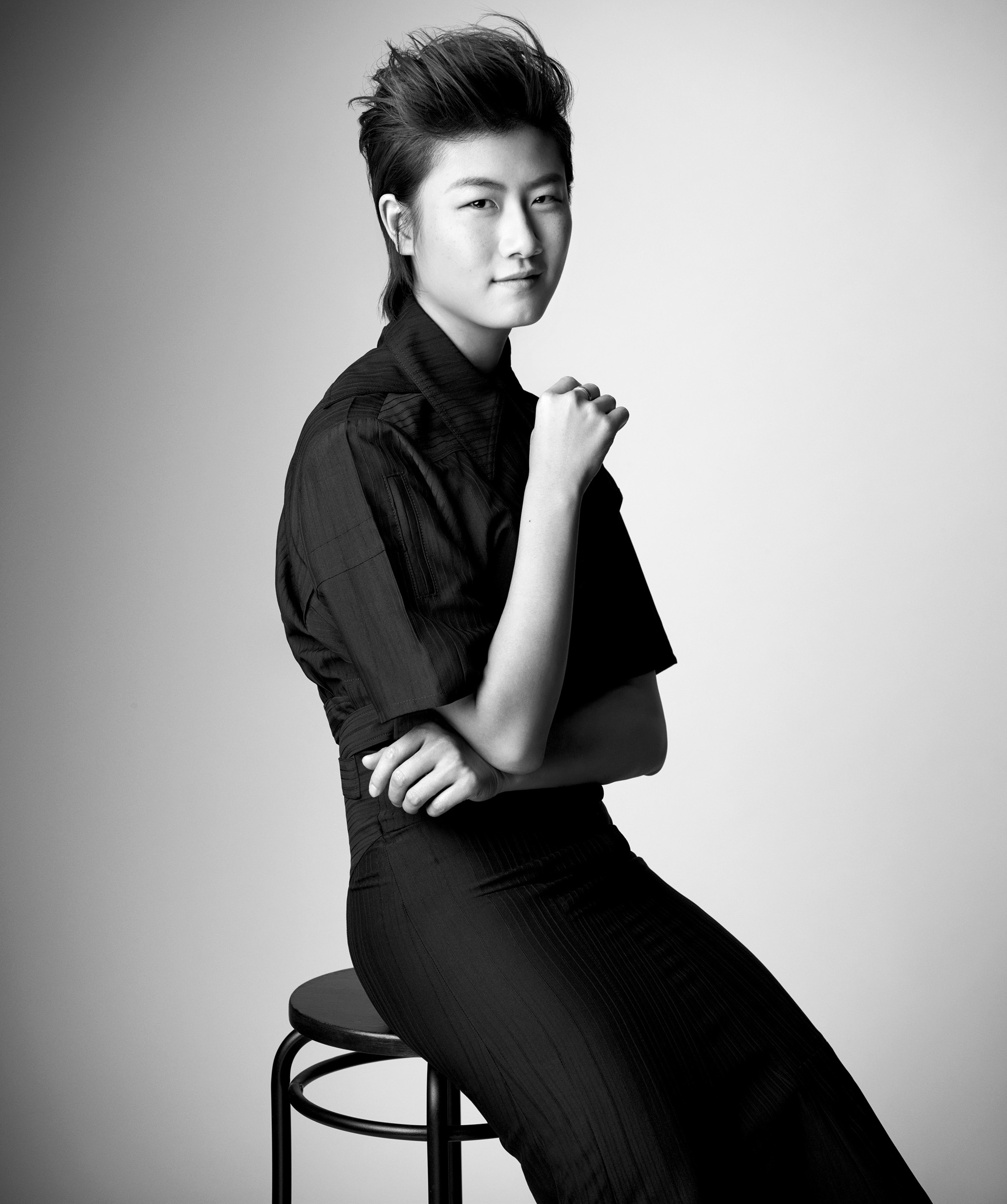 Ding Ning: Heart of a Champion

Ding Ning on court is a sight to behold: That steely gaze, explosive serves and powerful returns make her matches a thrill to watch. But when she’s not gunning for sporting glory, she winds down with drama serials and TV variety programmes on her tablet, shares food photos with her two million Weibo followers, banters with her mother on her avoidance of sunscreen, and giggles when dressed up and positioned in front of a camera.

“People might say I look aggressive, almost murderous, on court — I’m focused during games, and I’m passionate when I play,” Ding says. “But in private I’m more gentle, I like to eat and go out — an extrovert, definitely.”

The 27-year-old had plenty of time to indulge during a week-long jaunt to town, during which she toured Universal Studios Singapore, and dug into chilli crab and rainbow bread ice cream sandwiches like a local. The world’s top-ranked player, according to the International Table Tennis Federation, had just won her third singles’ title at the 2017 World Table Tennis Championships in Düsseldorf in June, and competed in the inaugural season of the T2 Asia-Pacific Table Tennis League at Pinewood Iskandar Malaysia Studios in early July.

Once back at home, the 2016 Rio Olympic women’s singles gold medallist will return to her rigorous training — morning and afternoon sessions, with lunch in-between, and lights out at 10.30pm, a routine she’s kept since the age of 10, after moving from Heilongjiang to Beijing to join the table tennis team.

“At the start I didn’t think I loved table tennis, because I felt it was tiring and challenging,” she says. “But my friends reminded me, ‘Ning, you really love the sport’. I kept coming back to it in every conversation and they’d say, ‘Can’t you talk about anything else?’”

Did you imagine you would become who you are today?

Not at all! At the start, I thought if I could take part in the World Table Tennis Championships, it would be amazing. I saw senior teammates emerge victorious from those tournaments, and I was inspired. But it’s extremely difficult — you don’t know what you have to do to get there apart from working hard and putting in effort. So even today I still find what I’ve achieved incredible.

What were your best and worst moments of the past decade?

At the 2010 World Table Tennis Championships in Moscow — it was my first time representing the country on such a large stage — we lost the team event despite having been reigning champion for years. Then, at the London Olympics in 2012 I went through a worse episode. On the contrary, when I won my first world title at the 2011 Championships in Rotterdam, I found it hard to believe I’d achieved it — I felt I was the happiest person on earth. Every time something disappointing happens, you’d think it was the worst you’ve gone through, but after pulling through, you realise it’s all part of life’s journey, and you grow from enduring and overcoming it.

During the 2012 London Olympics, where controversial penalty points deducted from you tipped the women’s singles gold-medal match in favour of your teammate Li Xiaoxia, how did you recover from the two-year fog that followed?

That game was a huge blow to my confidence and it cast doubt on my techniques. I thought many times of giving up, because I wondered if I had reached the limit of my abilities. I had no idea whether I’d still be part of the team for the 2016 Rio Olympics — competition was stiff, talented players were all around, and the younger ones were rising fast — but my family, friends and coaches believed in me. What was most important was my ability to challenge myself, and I took advantage of that drive.

If you had quit the sport then, what would’ve happened?

Actually, I think I didn’t quit because I had no backup plan! (laughs) I had been playing table tennis since I was five. It was what my life was about, and I really loved the sport even though it brought me great pain. Through repeated debates with myself, I concluded I wanted to do well in it. It was a simple reason but enough to keep me going.

How does competing frequently against your own teammates affect friendships in the national squad?

When the Chinese national team competes internationally, we end up playing against one another 99 percent of the time. We can be opponents in singles events, a duo during doubles events and partners for team events, so everyone is used to this and can compartmentalise. If I face off against a good friend, giving it my all is a form of respect. If I go easy on her, she might think I don’t consider her a worthy opponent. We might get along better with some than others, but with so many of us growing up and training together, they’ve become a big part of my life. We couldn’t have spent more than a decade together as strangers, right?

I don’t really have a goal now! (laughs) I think I’ve fulfilled them all. My sporting career is starting to wind down, so I want to enjoy my last moments of this journey. Once I leave the team there’ll never be another chance to relive them. I am aware of the trajectory of my sporting career. I don’t know for sure that I will leave the national squad by a specific date — but the countdown has begun.

Will you switch to coaching?

Not really! I haven’t thought about coaching, but it’s way tougher than being an athlete. Instead of focusing on your own progress, you have to look after all the players under your charge, and you need massive foresight to plan and strategise their futures.

Ever regretted your atypical childhood?

I didn’t attend school much, and time with family was always short. I used to envy other kids, because they had winter and summer holidays, but my entire year was spent training and competing. When I moved to Beijing on my own, I got homesick and missed my parents. It was tough, but if you’d asked me point-blank then whether I wanted to keep playing table tennis, I think I would say yes. I was so young, and I‘d spent five to six years training for it. I’d developed feelings for the sport — even if someone told me to stop, I’d want to defy that. It’s really not that easy to let go just like that.

I think her influence has been the greatest. Both my parents were athletes — she a basketballer, he a speed skater — and she’s the guiding light in my life. We’re not just mother and daughter; we’re friends too. I idolise her and maybe she, me. Her persistence was crucial. As a child, I might have given up quickly. If she had forgiven me or let me off easy, I wouldn’t have made it.

I hear she used to buy you all your clothes?

She still does! I don’t even need to try them on in person. She’s far more on-trend, plus I’m terrible when it comes to shopping — five minutes in and I feel like my soul has left me. I think I’m more adept at eating and having fun.