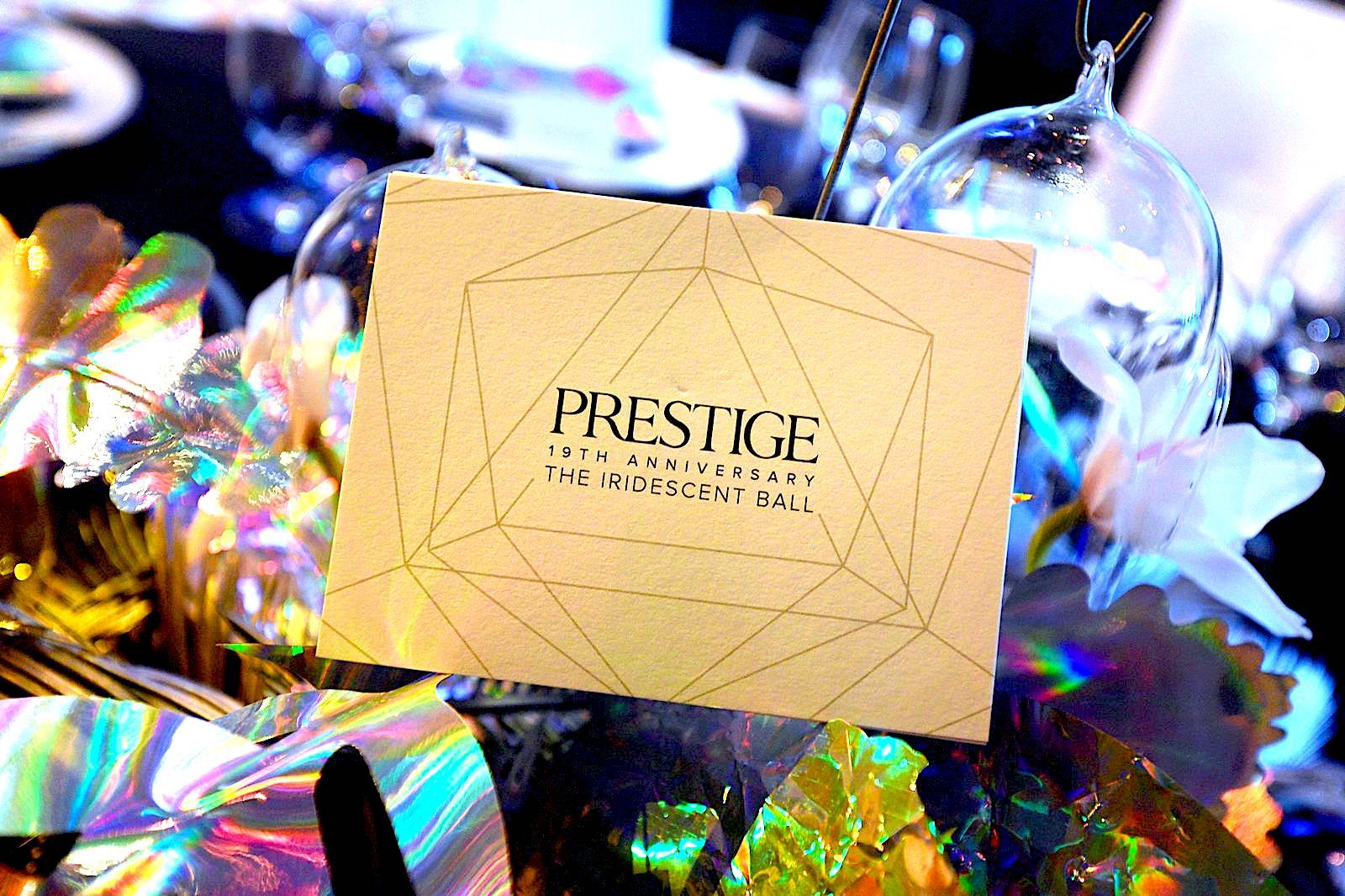 It was a full moon on Friday the 13th, and Singapore’s glitterati came out in full force to shine at The Iridescent Ball and celebrate Prestige Singapore‘s 19 stellar years of being Society’s Luxury Authority. Coincidentally, the Ball fell on the same day as the Mid-Autumn Festival, a Chinese tradition that sees the happy gathering of friends and family, which that night certainly was.

Our friends definitely came set to dazzle for the soiree. Women and not a few men in sequinned, shimmery beading, metallic and opalescent ensembles took their turns in the spotlight at our photowall and stunning LED video wall that made for novel Boomerangs and eye-catching Instagram stories. Early souvenirs for the night came by way of our sponsor Celebrity Cruises’ instant printouts at said video wall. The two supercars at the entrance of JW Marriott Singapore Beach Road’s Grand Ballroom were also showstoppers that guests couldn’t resist checking out and posing for shots with — certainly it was a treat to be the first in Singapore to view the racy red Ferrari F8 Tributo, courtesy of Ital Auto, along with the smouldering black Ferrari Portofino.

The ballroom’s basement foyer was abuzz with exuberant mingling over bubbly and whisky cocktails. The characterful Mortlach Showcase by Diageo Rare & Exceptional was naturally quite the draw, and guests happily partook of Mortlach 12 Year Old cocktails while they discovered why the label is touted as “Whisky’s Best Kept Secret”.

Roger Dubuis’ showcase of its bejewelled Velvet timepieces caught many women’s attention, while the latest Excalibur Huracán models certainly set hearts racing. The brand’s dramatic “Dare to be Rare” photo wall was a popular pitstop for all. Across the room was the dreamy Lalique display of its crystal Tourbillons collection, its eye-catching backdrop proving to be quite a popular spot for photos as well.

The Ball got into full swing once doors to the ballroom were thrown open. “Electrifying” best described the scene: Guests were taken on a brilliant interstellar journey — a mini film prelude to the rest of the night’s programme.

Lena Kwek, Prestige Singapore‘s Publisher and Managing Director of Publishing, Burda Singapore, took the stage to warmly welcome all friends and partners who joined us for the evening. This was followed by an address by Martin Weiss, the Executive Board Member of Hubert Burda International in charge of international publishing, who had flown in from Germany to attend the Ball. They were then joined on stage by the management and Prestige editorial team to fete guests in a toast to Prestige’s 19th anniversary and many more years of friendship.

Guests were delighted to find at their table placements an iridescent pouch, specially created by Bynd Artisan, containing the details of the beautiful dinner that awaited them and the night’s programme. Few stayed in their seats for long, of course, taking the opportunity between courses to catch up with more friends and snap wefies against the backdrop of Philippe Starck’s stunning Forest of Lights installation, which hung from the high domed ceiling, catching the changing hues of the ambient lights.

Hailing all the way from the UK was British card shark and mentalist Drummond Money-Coutts, better know by his screen name DMC. Striding between tables, he led guests in astounding card tricks that dropped quite a few jaws. Most notably, perhaps, was how he used his mentalist skills to tease out the name of a Prestige Award winner out of Richard Nilsson, Burda Asia and France’s Managing Director and Head of Digital, who was set to present Prestige’s inaugural Vanguard Award that night.

With random numbers thrown up by Richard and a few guests, and dutifully keyed into a calculator by emcee Adrian Pang, DMC obtained a string of numbers that, when flipped upside down, spelled out the name of Lai Shanru! The co-founder of Singapore’s largest e-commerce and cashback platform Shopback — and a Prestige 40 Under 40 inductee this year — received the award that recognises young entrepreneurs leading the charge with new and innovative ideas.

Next to be recognised was illustrious philanthropist Laurence Lien, who was conferred the Patron Award by Martin Weiss for his contributions as a changemaker who leads with both heart and mind for sustainable, creative solutions for social issues in Singapore and overseas.

Laurence is chair of the Lien Foundation and the Community Foundation of Singapore which he founded, and is a co-founder and CEO of the non-profit Asia Philanthropy Circle, as well as CEO of the National Volunteer & Philanthropy Centre in Singapore from 2008 to 2014. His jocular but pointed speech emphasised his hope for more of “the 1%” of society’s ultra-wealthy to give back in a meaningful way.

In line with Prestige Singapore’s tradition, the best-dressed guests of the evening were duly recognised — this year with the new Dazzling Awards, which went to Chan Kok Weng for best-dressed gentleman as well as Paige Parker, Susanna Han and Tan Min-Li for best-dressed women. The night’s best-dressed couple went to Anthonia Hui and Leonardo Drago.

Awardees took home beautiful trophies in the form of a Lalique Tourbillons Vase, as well as a Diageo Private Suite Experience. Vanguard award winner Shanru received a thrilling bonus by way of a 24-hour Esperienza Ferrari test drive, made possible by Ital Auto.

Besides the brilliant card tricks by DMC, guests were also treated to a dance performance by the talented dancers from Wildfire Entertainment.

To a dance mix by DJ Stephen Day, The revelry continued back in the foyer downstairs, where a spectacular dessert and cheese bar, in addition to an al fresco spread of local fare including laksa and prata, tempted guests enough to find more space in their stomachs. Mortlach doled out drams of its 16 and 20 Year Old single malts, and the Davidoff cigar bar too saw its fair share of patronage. Some guests stayed past 1am that night, although it was way past their bedtimes.

Guests eventually trickled on home on a high with countless photos, a belly full of sweets and savouries, and fab memories with the Prestige family — in addition to door gifts that include a full-sized The History of Whoo’s award-winning Bichup Self-Generating Anti-Aging Essence, and Prestige Singapore‘s anniversary issue that measured in at a whopping 312 pages.