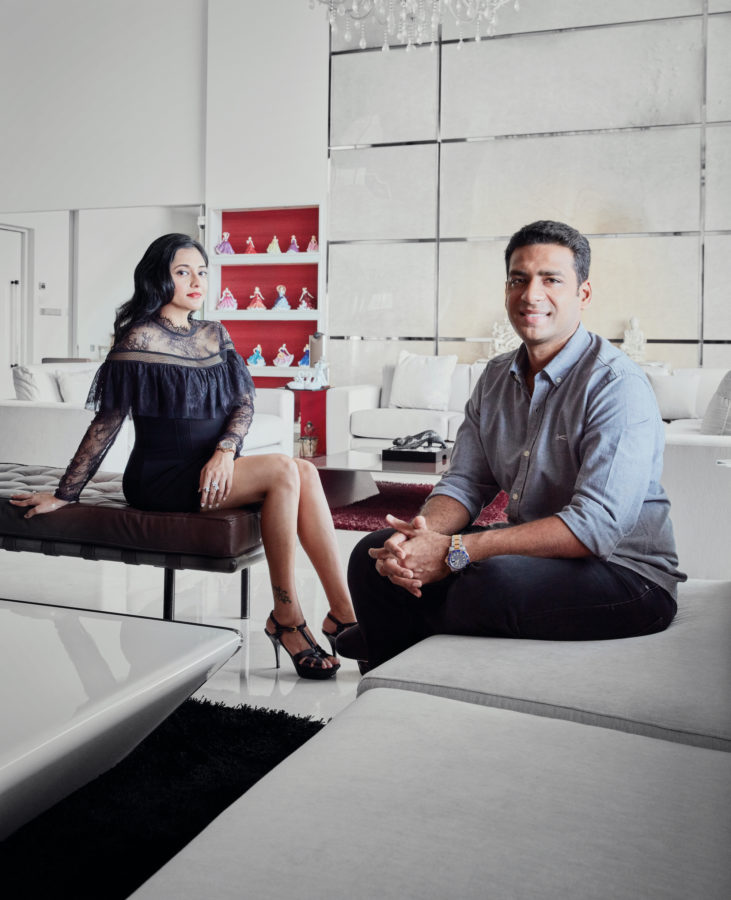 Had everything gone to plan, Vihari and Abhishek Poddar would have celebrated their 10th anniversary with a second wedding this year.

Unlike their first wedding, which was a grand affair like their families wanted, this would have been an intimate event just for the couple and their friends, taking place at the resplendent Umaid Bhawan Palace in Jodhpur, India, where Indian actress Priyanka Chopra married American singer Nick Jonas.

They had booked the venue over a year in advance, but were forced to cancel due to the Covid-19 pandemic. It is a shame, but life hardly goes as planned and that is not always a bad thing – especially in the case of Abhishek and Vihari, who have continually gone against the grain.

In Indian society, arranged marriages are customary and make up the majority of all marriages. Vihari did meet with a few matches who were eligible bachelors that ticked all the traditional boxes: well-educated, from good families, wealthy (some were billionaires). “In our culture, you marry someone your family feels is suitable,” explains the 35-year-old jeweller. “Being the rebel that I am, it clearly didn’t go that way.”

Similarly for Abhishek, who is a third-generation director in his family’s India-based textile company, his marriage to Vihari is known as a “love marriage” and the first ever in the history of his family. While he had not been made to meet prospective matches before, he too was expected to marry someone his parents chose. It is also typical to marry within the same ethnic and religious group, of which Vihari, who is Gujarati and Jain, and Abhishek, who is Marwari and Hindu, were not. In addition, Abhishek lived in Mumbai, while Vihari grew up and has mostly been based in Singapore.

But by a twist of fate 12 years ago, the two had been introduced by a mutual friend at a gathering in Mumbai and immediately hit it off. “Our eyes were just glued on each other the whole time,” adds Vihari. Days later, Abhishek invited her to his birthday party, after which he declared to his friends in an inebriated state that she was going to be his future wife. After a romcom-worthy courtship, they were engaged within a year.

“I fell in love with him because he was very accepting of who I was, and I never needed to change myself, which is not common in Indian society,” says Vihari. For Abhishek, he appreciated that they each had a different upbringing – his was stricter while Vihari’s was more laid-back – and personality, but were both just as open-minded.

“She’s more of a street-smart, high-EQ kind of person, while I’m very introverted. But she’s very well-travelled and I also love to travel. So we were able to connect and talk about anything without judgement,” says Abhishek, adding candidly, “And also she’s really hot.”

Both had also led rather alternative lifestyles. Abhishek was in a punk rock band in boarding school, and used to deejay at clubs and parties. Vihari had lived abroad alone in Italy at the age of 20, which was also almost unheard of in conservative Indian society. Coming from different cultures had its challenges and the first three to four years of their marriage were the hardest, say the couple. They were living with Abhishek’s family in Mumbai at the time, but both were from big families that had vastly different traditions and dynamics, which often resulted in disagreements. “This is also why in India they prefer arranged marriages, because then a mould can be jointly created by both families,” explains Abhishek. “But we wanted to make our own mould.”

These differences put a strain on the couple early on, but they eventually fought them together, albeit having to sacrifice a lot of luxury for the freedom they sought. It was a tough decision, especially for Abhishek who had to leave his family, but they were expecting their first child and wanted to bring her up on their own terms. “So we made a decision, and we’re happy,” he says.

In 2014, the couple moved to Singapore, with Abhishek shuttling back and forth until 2017, when they both permanently settled down here. Vihari reflects: “We did it because we want the next generation to have the ability to think for themselves. It was a tough few years and I think every marriage is tough at some point, but it’s like building a house – if your foundation is honest and strong, one that is built with love, respect and understanding for each other, it will hold longer.”

Last year, the duo decided to team up as business partners and start Abhishek’s passion project, the men’s fashion e-commerce site Mr. Square. Having been in the textile industry for about 13 years, Abhishek has forged close relationships with some fashion designers. “They’re very creative people I resonate with and have always wanted to work with. In Singapore, you generally have either big luxury brands or mass-market ones. I feel like there is space in between for niche players who offer good- quality European designs but not at outrageous prices,” he says.

As a very hands-on father, it was only when his two children reached the ages of three and six last year that he felt he had the time to finally embark on this endeavour. Mr. Square currently offers four brands, including Spanish label Edmmond Studios and Paris-based streetwear brand Bricktown, with new additions in the pipeline.

Working together was a no-brainer for the couple, who said they knew they would make a good team. In fact, it was when they became parents that they discovered just how well they complemented each other. Vihari jokes: “Our relationship has grown stronger since having kids, because it’s like us versus them. They’re so smart and harder than work!”

While the Poddars were excited to have their kids be a part of their dream 10th anniversary wedding, which is now off the table, they do have something else that was unplanned to look forward to this year – they will be welcoming a baby girl this April. While elated, they are currently savouring these last few months of relative peace as a family of four before the brood gets livelier. “We’re nervous but happy,” says Vihari. “We love being together as a family and it is great that there’s nothing to stress about now.”

Pigeon’s blood rubies: Jeweller Vihari Poddar give us a crash course on the rare gemstone

Vihari Sheth of Vihari Jewels on her father’s influence