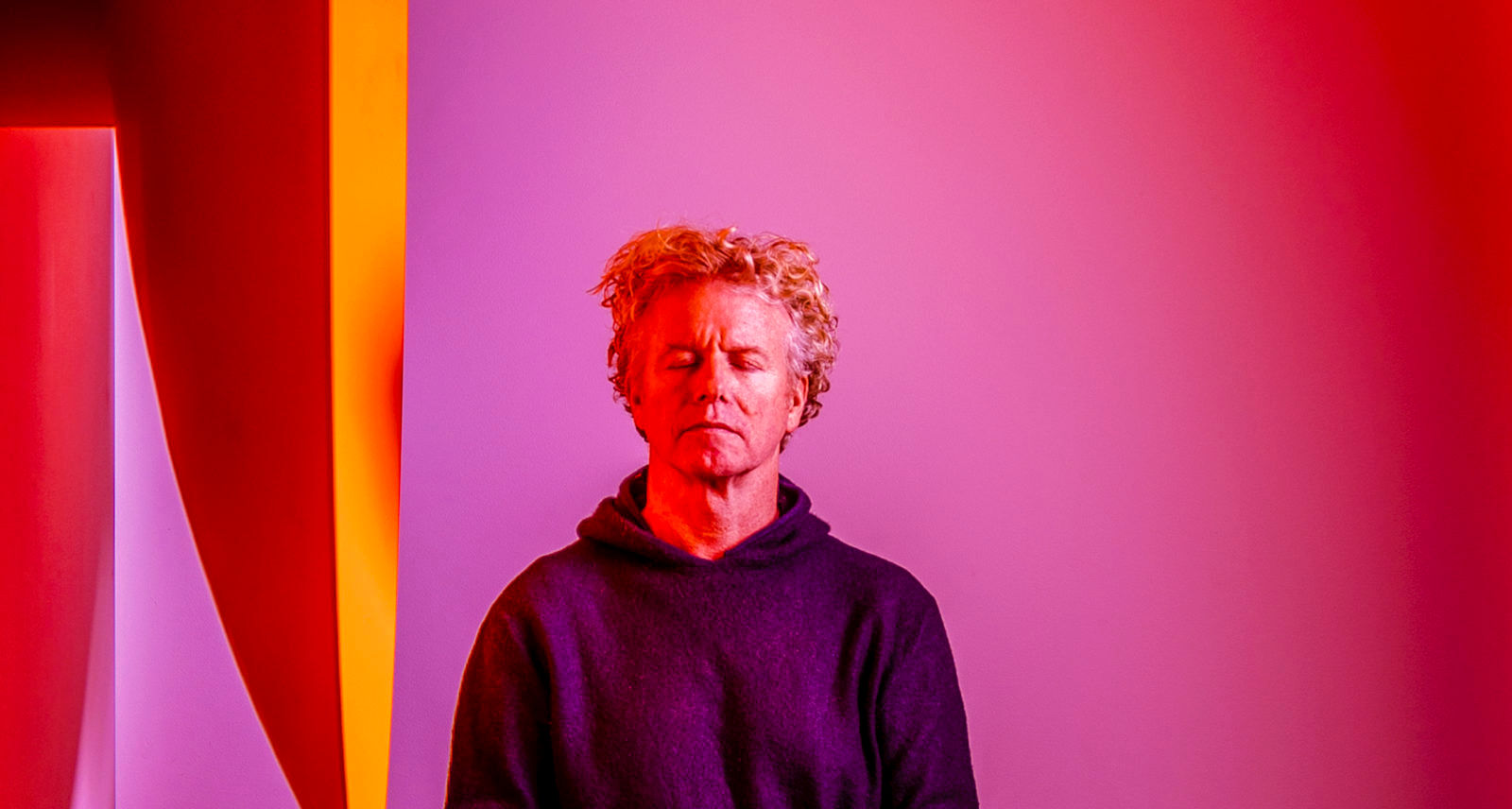 Chris Levine, the UK-based multidisciplinary artist, talks to us about the power of luminescence, art and soulfulness, and his most famous work.

Perhaps one of the most famous contemporary art portraits is Chris Levine’s Lightness of Being, giving a fresh perspective on one of the most famous figures in the world, Queen Elizabeth II. Still, stoic and ethereal, her face literally lights up in a vision of intimate serenity. Levine has portrayed other famous faces – the Dalai Lama, Kate Moss and Grace Jones, for example – but the sheer range of his expressive forms sees his work with light transmuting far beyond portraiture, into the worlds of sculpture, installation, fashion, video and music.

There’s something indelibly transcendent about Chris Levine’s work. And with his more immersive pieces, such as those just exhibited in 528 Hz Love Frequency at Houghton Hall in Norfolk, England, the experiential nature of his art leaves an outsized impact. As one of the world’s most lauded light artists, Levine’s work can often shift perception through image and form. The power of his medium speaks to the human experience, with evocations both spiritual and philosophical. Viewers often find themselves transfixed, in a semi-meditative state.

Chris Levine has exhibited in venues such as London’s National Portrait Gallery, Radio City in New York, The Eden Project, The Royal Opera House, MATE museum in Lima, and Tasmania’s MONA Museum. There have been collaborations with the likes of Massive Attack, Hussein Chalayan, and Antony and The Johnsons, further catapulting Levine into the pop-culture consciousness.

Here Chris Levine talks about his most famous works, his latest exhibition and working with light in a time of darkness.

Artist Chris Levine on the power of light

What draws you to using light as a medium in your art? And tell us how it came about.

I’ve had a fascination with light for as long as I can remember. Light is something we tend to take for granted with little question, but it’s also fundamental to the mechanics of physical reality as we understand it. I started using light in the form of laser in my final year at Chelsea School of Art, where I did a degree in graphics. I felt holography, which used laser to record 3D images, would play a part in future graphics and I was obsessed with it at the time. Eventually, it was the lasers used to make holograms that I found most interesting.

There’s a sense of transcendence and optimism that comes with much of your work. Is this what you intend, and do you think this is especially important in the world right now?

We’re at a defining moment in the human story. As things get crazier and with so much injustice in the world today, my work is all about light and its ultimate power over darkness. Freedom is within and my work is a humble pointer to realising the refuge that exists within stillness. Much of it is born out of meditation and my art seeks to induce a meditative state, which cultivates optimism and positivity.

Tell us about the challenges and complexity of working with light.

In order to observe light in its purest, single-frequency form, I need to apply a considerable amount of technology in the form of laser. The art is in maintaining the emotional connection between me and my audience with it not being lost in translation between the technology being used and the means by which we perceive the art. Too much tech or wow factor can get in the way.

The imersion and experiential aspect of something like Molecule of Light is extremely powerful. What feeling do you want to evoke with works like this and is it your ambition to do more in this scale and nature?

I’m reaching beyond the physical and into realms more mystical. I seek to take my audience towards stillness, where the mind settles and the heart is more deeply felt with the realisation that we’re a part of nature and not apart from it. Ultimately, I’m taking my work towards a cosmic scale. With my main piece in this exhibition, Molecule of Light, the viewer stands beneath a 25-metre-tall structure, bathed in a column of light and beams of sound, incorporating 528 Hertz and other solfeggio frequencies. Those who stay there long enough will start to resonate with the different frequencies while it purifies.

Tell us about 528 Hz Love Frequency at Houghton Hall and about showing in such a historic setting.

528Hz is the middle note on an ancient musical scale known as solfeggio, which correlates to the energy nodes in the body. Gregorian chant music is composed on this scale and the middle note, 528Hz, is often referred to as the heart signal. I’m applying ancient wisdom to high technology to create art that’s born out of the new paradigm we find ourselves in. I’m using sound, pure tones, rather than music, specific frequencies. Houghton Hall has a strong artistic heritage and Lord Cholmondeley is bringing it into the 21st century by presenting my work. I feel honoured.

Your portrait of Queen Elizabeth II has gained international recognition and acclaim. Why do you think it touched so many people and what was it like creating a portrait of such an icon?

From the onset, I sought to create an iconic work that would resonate with contemporary culture. The Queen is the most portrayed woman in history, which made the challenge as daunting as it was exciting. Ironically, the Lightness of Being image was an outtake, an in-between moment that was only found years after the original shoot. There was a lot of light on Her Majesty, so I asked her to rest and close her eyes in between shots and the camera in the middle of the track caught that moment – it leapt out at me, and it really resonated around the world. The eyes-closed aspect took the work into a spiritual realm, which is perhaps why it made so much impact. It was a rare privilege to be able to work with Angela Kelly, personal dresser to the Queen, to pick an outfit that was both elegant but simple and reflective of her equanimity.

You’re also the second artist to have been given official permission to create a portrait of the Dalai Lama, auctioned off to raise money for a good cause. What was it like having His Holiness sit for you?

After my Queen portrait, I was often asked whom I’d most like to have sit for me. My answer was always David Bowie and the Dalai Lama. The serendipity of how the Dalai Lama commission came about gives me goosebumps when I think about it, but that’s a story for another day. After the sitting, he gave me a hug and I was buzzing for hours. To work with the Queen and the Dalai Lama in such intimate states is a rarity – unforgettable, unbelievable. The portraits are extremely relevant facets to the bigger whole and in my practice, if it were to be meditation, the portraits are part of the breathing – they centre me – but I’m excited to be working on the engineering and light sculptural practice as part of my work’s natural evolution.

There’s been much debate on public spaces and public art works lately. For you, does public art have to “do” anything? If so, what?

My feeling is that unless it contributes to the betterment of man, then what’s the point? Art enables you to question and look for answers, to try to connect with a more spiritual dimension. In my practice, I’m searching for the answer. I’m a truth seeker, I want to know the nature of reality and share those concepts with others to explore their own. We need more positivity, inspiration and light in the world, or at least work that questions the status quo in the search for deeper truth and wisdom.

Have you been thinking more about the future or the past recently?

History rhymes and my concerns about the world today are for the lives of our children in the future, given the new AI-governed era that’s now coming into view.

You work across mediums and formats, in works that range in scale from huge sculptures to those that hang neatly on gallery walls. What do you enjoy about the freedom of this?

My art is all about experience and emotional connection. My work exists in more metaphysical terms and beyond the format of a rectangular object hung on a wall.

Has going through a pandemic changed you and what you want to achieve with your work in any way?

The global authoritarian response to the pandemic has driven a heartfelt desire to turn up the power of light in my work. Freedom is within and sometimes my work can take you there. Light will always conquer darkness, in the end. It’s a cosmic law and we can have faith in that.

What kind of art inspired you as a young man?

I’ve always been interested in the crossover of science and art. I was smitten by the idea of holograms as an art form but felt most examples were the results of laboratory exercises and not an artistic endeavour. My drawings at the time were attempts at super photorealistic renditions and I’d lose myself in the relative light and shade of a pencil mark. It was a natural progression into holography as next-level photorealism and I used my time at art school to explore it.

What are you hopeful for the new year?

That there’ll be a beautiful light at the end of this tunnel of mass hypnosis.