Cover story: Adrian Ng and Loh May-Han on how play anchors their relationship 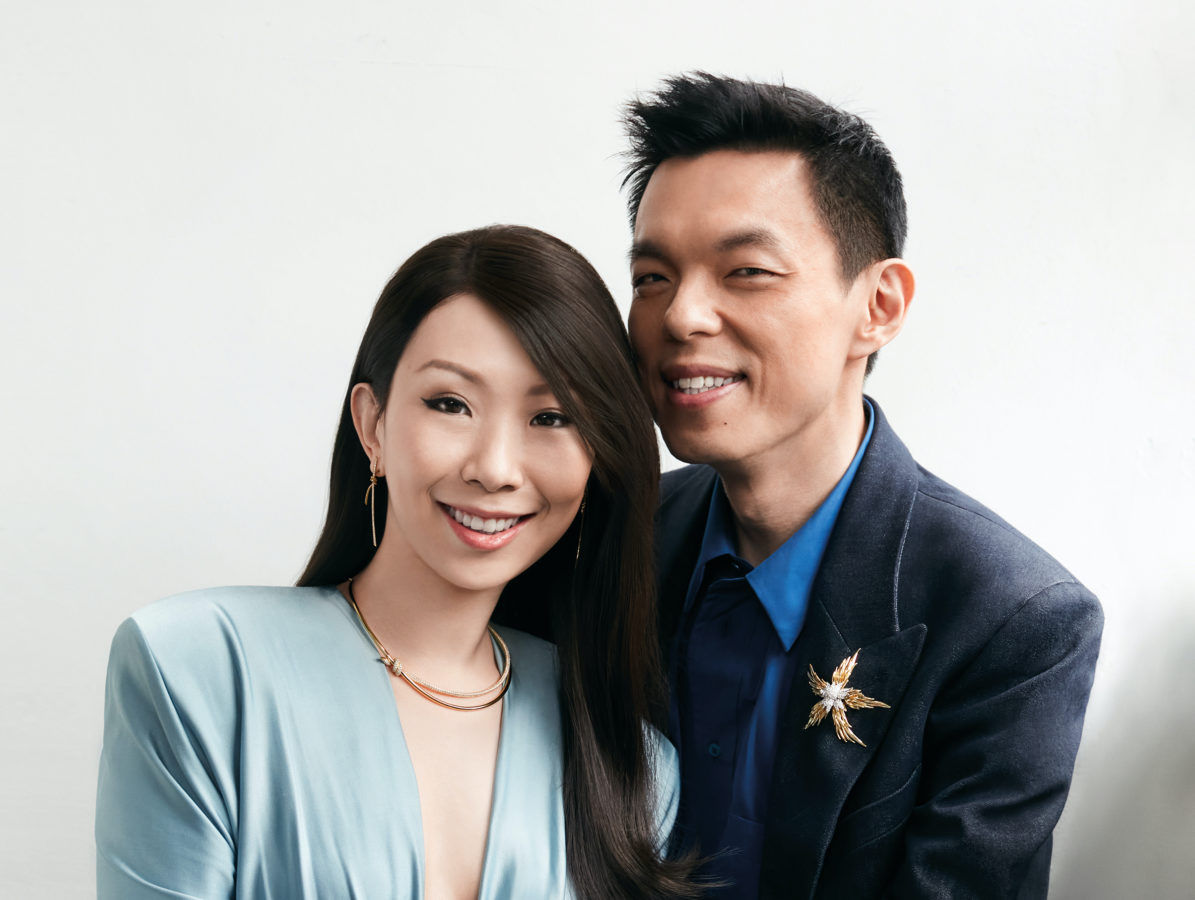 Society thinks that play is reserved for children, but not Adrian Ng and Loh May-Han. The doctor couple tell Crystal Lee why and how they have fun, even on bad days.

When was the last time you indulged in some aimless, unapologetic – and maybe even silly – fun?

Many don’t make time for play. Play can also feel like a waste of time when we’re inundated with endless adult responsibilities and pursuits. Add to that a climate of uncertainty and precariousness, and it’s far easier to be anxious than to be playful.

But play – done for its own sake with no specific outcomes – offers a reprieve from the daily hustle and bustle. It’s also been proven to release endorphins, stimulate creativity and strengthen relationships.

Ralph Waldo Emerson, one of the most influential writers and thinkers of the 19th century, said: “It is a happy talent to know how to play.” And it’s something that Adrian Ng and Loh May-Han have a knack for – their avenues of fun are well documented on their social media @lohmayhan and @doc.adrian, which show the doctor couple eating out, dressing up, attending fashion launches and doing photo shoots. Yes, these are grown-up activities, but the gleeful pair always look like they are having the best time.

We believe in playing as hard as we work. In a way, it’s a form of escapism, an escape to another world that is non-medicine and made up of a shared love for all things pretty and beautiful.

Day and Night
“I believe play is part of being human – from the time you’re born, to the day you go,” says Adrian. “Play stimulates that part of the brain that makes you think outside the box. In games, there are rules and you try to think creatively to get ahead, so it scratches the right brain. I still see my older relatives and friends playing. They go out with friends to chit-chat, do things, play board games.”

“We compartmentalise,” May-Han clarifies, calling to mind that what we see on social media is only a small slice of reality. “When we work, we’re serious. We get our jobs done. We have responsibilities, obligations and a professional image to keep up to provide patients and fellow colleagues faith and trust. Then when we go out and have fun, that’s when we really let our hair down.”

“We believe in playing as hard as we work,” Adrian adds. “In a way, it’s a form of escapism, an escape to another world that is non-medicine and made up of our shared love for all things pretty and beautiful.”

The doctors have a rigorous and unpredictable work schedule. As anaesthesiologists, they are the first ones in and the last ones out in surgery, making sure the patient gets through the entire length of the procedure safely. They also provide pain relief and perioperative management of ongoing medical conditions. “In anaesthesia, a crisis can develop rapidly and we might only have seconds to minutes to react,” Adrian reveals.

I’d imagined doctors to be desensitised to matters of life and death, but not these two. “It’s a privilege to be able to see a patient through a time when they feel very, very vulnerable,” she says. “Whatever we say or do has an impact on the patient’s life, be it holding the hand or giving a soft word of reassurance that ‘I will be taking care of you throughout’.”

As if their work doesn’t sound stressful enough, May-Han juggles between clinical duties, hospital administration (she sits on the medical board as associate chairman for clinical governance) and education (as undergraduate medical education director for anaesthesia) at the NUS Yong Loo Lin School of Medicine. In fact, she was awarded the NUHS Teaching Excellence Award, Dean’s Award for Teaching Excellence, NUS YLLSoM Teaching Excellence Award and NUS YLLSoM Fortitude Award at the end of 2020, affirming her dedication to educating the next generation. Where she finds the energy and time for all that we see on Instagram is anybody’s guess.

Power Play
That being said, the couple don’t go to every party or event they’re invited to. “Work comes first” is their motto. “We’ve missed events, balls and gatherings because of work,” says Adrian. “We have to be there until the surgery ends. And surgery can sometimes be very unpredictable. We can’t tell the surgeon: ‘Sorry guys, gotta go’. We don’t clock off.”

Personal time is precious. What if an event turns out to be not so fun? How do they make the best of things? “I think it’s an honour to be invited and attend these events,” Adrian replies. “Every event is fun. It’s always a choice. You can choose to have fun and see the positive in everything.”

“I mean, you can see it as a waste of time, or you can choose to see differently,” May-Han chimes in. “You can see the effort that people put in organising the event. There’s a lot of time, a lot of financials put into the event. It’s not easy behind the scenes. We try to be good guests and not make things difficult for people on the ground working. We’re also workers in the service line, so we understand their challenges.”

The conversation takes a solemn turn for a minute. “Life presents many situations to a person,” Adrian continues. “It may be pleasant or unpleasant, and we are not given a choice whether it’s good news or bad news. But we do have a choice as to how we react and respond to such news – and it’s more vital when it comes to bad news. We choose to seek out the positives even in adversities. It is the same attitude and frame of mind whether it’s work, play or personal life.”

It’s a privilege to be able to see a patient through a time when they feel very, very vulnerable. Whatever we say or do has an impact on a patient’s life.

This shift in tone catches me a little by surprise because Adrian is quite clearly the more playful of the two. He was prancing behind May-Han as they approached our table for the interview. He’s the one pulling faces, making jokes and donning bold pieces not many would dare to, like a Louis Vuitton jumper covered with stuffed animals and a Jean Schlumberger Bird On A Rock brooch from Tiffany & Co.. In contrast, May-Han cuts a composed and contemplative figure. “I’m persistent once I’ve set my mind on something, and can be quite resistant to change,” she admits. “I’m not as flexible and spontaneous as he is. He makes me gain a bigger perspective of things, pushing me to see outside my world view.”

“Chaotic” as he is (according to May-Han), Adrian is also the stability in her life. “He’s always there, right from day one when we were dating.” She reminisces about the time when she was staying on campus. “Then, he wasn’t like he is now. He was very quiet. He would come to my room at the hall and just plant himself there, not saying very much – so much so that my friends gave him the nickname ‘furniture’ because he’s always there. For certain things that need to be done, he’ll do it without me asking him to. He always tries to make my life easier, simpler and less stressful.”

Adrian speaks similarly of May-Han. “She’s the anchor in my life, a guiding force. She’s very rock-steady. Having order in your life matters and she gives me that. On the other hand, I provide the spice, the spontaneity. I believe that we’re synergistic; one plus one is more than two. We become so much more because of each other.”

The Lightness of Being
And he’s right. You can’t pigeonhole the pair. They are highly successful medical professionals who mean business at work. They don’t mess around. On social media, they are glamorous A-listers with invitations to some of the most exclusive parties and showcases in town. As individuals, Adrian can be dead serious and wacky, while May-Han is poised yet childlike – as seen in the softness of her speech, the purity of her smile, her love for Doraemon and her obsession with heart-shaped accessories.

Yet there’s more that we don’t see, the sides of the couple that exist beyond their professional and public image. What they’re like behind closed doors or how they behave in crisis. But I don’t ask. Our two-hour-long interaction is a reminder that human beings are complex and diverse. Understanding this makes room for not just connection, but also discoveries and inspiration.

With them, I learnt that, above all, happiness is a choice, and that Adrian, as much as he horses around on his social media, is the one doing the laundry.