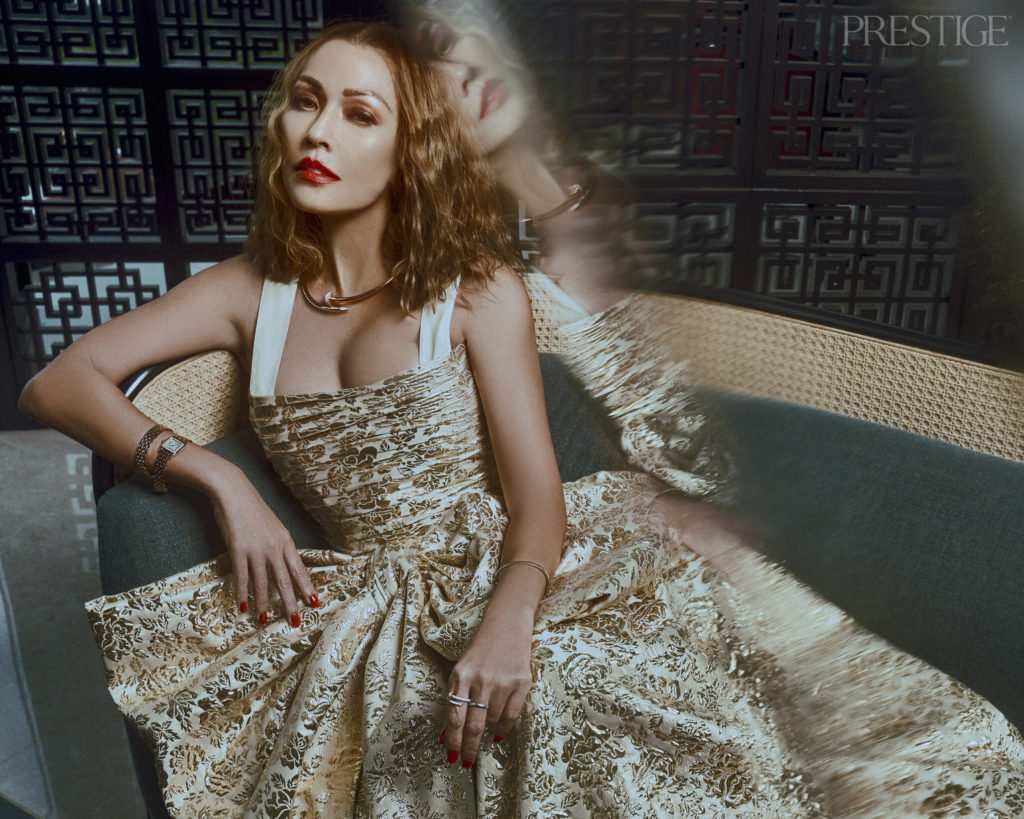 Ezurin Khyra saunters into the hotel lobby on the morning of our cover shoot, seemingly oblivious to the effect her presence has over the other hotel staff and guests.

Curious onlookers stop in their tracks to take a second look while others eye her hourglass figure enviously. She’s dressed in a matching Versace tracksuit, while a pair of black-framed Chanel sunglasses frame her face.

I address her by her first name Ezurin but to her closest fashionable allies, she’s affectionately known as E. What’s even more compelling is the public moniker she proudly carries – Princess Ezurin. But if there is one title the high-society fashion darling will fiercely defend to death, it is her title as a doting mother of five to Tunku Amaan Khyra, Tunku Nadya Khyra, Tunku Omaan Khyra, Tunku Imaan Khyra and Tunku Rmaan Khyra.

In a pre-Covid world, Ezurin splits her time between her homes in London and Kuala Lumpur, overseeing her children’s wellbeing and education. When she’s off-duty, the former model follows a pulsing travel itinerary which includes destinations such as Brazil, the United States and Greece with an enviable couture wardrobe to boot.

It’s easy for one to be enamoured by the fabulous lifestyle Ezurin leads so much so that she has been granted her very own reality TV show. It took a year of discussion with Astro before she finally agreed to do the show, mainly because her five children had returned from boarding school abroad to be with her in Kuala Lumpur during the pandemic. The new season of Astro Gempak’s reality show The House revolves around Ezurin and her family including soul sister Magie Abang Saufi but here’s the twist – instead of glamourous Hollywood parties and fancy yacht trips, the show’s setting will be in a traditional kampung house in Hulu Langat.

“It was funny, when Astro said to me that they were going to set the show in a kampung area, I requested for them to find me a wooden house to live in. My kids and I visit Soho Farmhouse in the UK all the time so when I first saw the wooden home we were going to live in, I was excited to decorate it,” Ezurin shares.

Despite the traditional village home setting, Ezurin maintained her fabulous sense of style throughout the show, opting to style herself in every scene with outfits from her personal wardrobe. “I told Astro I did not want sponsors to dress me for the show. I have to wear my own clothes or else it will not be my DNA.”

While the audience will be offered a glimpse of how Ezurin and her family do their best to navigate uncharted waters, she wishes to highlight certain positive values for the viewers to take away. “I only agreed to this show on one condition – that there will be six topics for me to share to create awareness. I do not want to talk about how many shoes I own or how big are my diamonds,” says Ezurin who also received support from her children and their father (YM Tunku Dato’ Yaacob Khyra) to proceed with the show.

One of the key topics she chose to address in the show was family bonding. Divorced from her marriage two years ago, Ezurin wanted to stress on the importance of family in the show. “When parents are divorced, you put your kid in a very difficult spot to choose between mum and dad. I wanted to show how it was crucial to set our differences aside and focus on giving the best to our children. The wellbeing of my children is important especially since my kids are high achievers in school and the last thing you want is to ruin that over your emotions,” says the mother of five who also takes her children’s mental health seriously. “When you raise children, mental health is important especially when you’re divorced. When you see something wrong with a kid, the first thing people point out is the kid must be from a broken home,” she shares further.

On the surface, it may seem as though Ezurin and her kids lead a more Western-oriented lifestyle given the time they spend abroad, but she aims to show the audience how important Eastern values are to their family especially when she educates her children.

There will also be other facets of Ezurin’s life her audience will unknowingly discover in the show such as her cooking skills (she’s been cooking since the age of nine) and how she decorates her home. “People assume I have helpers around the home to cook and question if I can even make sambal belacan?” she jests amusingly, sharing that her children would often request for her to whip up their favourite chicken rice dish.

As the stricter parent, Ezurin has always opted to decorate her home her own way instead of accommodating her home to fit her children. “I raised my children to respect their home. When they were younger, I’d tell them not to jump on the sofas and they can only eat at the dining room as no food is allowed in the living room,” she shares.

One of the show’s themes also touches on the topic of dating, a delicate, sensitive issue for every divorcee but Ezurin’s message in the show to other mothers out there is to take care of yourself first before you’re mentally ready to date again. Her favourite episode to shoot thus far has been the first episode because she had all five of her children with her before they returned to boarding school.

Though the show has received a fair share of backlash from the public after its release, Ezurin maintains that people were quick to judge her without realising her true intention was to create awareness especially on family. “I don’t take it to heart, everyone has an opinion. When people say something about you, you have to understand from the angle they are coming from. It doesn’t affect me,” she says.

Morning video calls with her children who are back in boarding school have become a regular routine but that does not stop Ezurin from fussing over her kids. She describes herself as a protective mother and sending her children off to boarding school was probably the most difficult thing she had to do. “I was worried that if I cried, they would start crying so I put on a brave front as it’s for their own good. Boarding school has shaped them and they have friends from all over the world. They actually educate me on how to be a better parent,” she candidly reveals.

When I prod Ezurin on her long-standing close relationship with her children, she cites honesty and maintaining an open communication at all times as the key. “When I was younger, I was too scared to say anything to my parents as I came from a very strict background. I want my kids to be honest with me even if they smoke or do drugs. Children are exposed to many things these days and it’s either you want them to lie to you or be honest. When the foundation is strong, they will know the dos and don’ts. They talk to me about everything and know to not neglect their studies and responsibilities,” she says.

If there is one thing Ezurin and YM Tunku Dato’ Yaacob have reached a mutual agreement upon, it is that the kids’ education always comes first. Though she has taken on a single mum role for the past two years, she stresses that self- love is priority. “As long as you take good care of yourself, there will be someone who will love you.”

From runway to couture, Ezurin’s bold fashion choices have turned heads and propelled her to a front row regular at fashion week. She credits her interest in fashion to her mother who always had a matching hat to pair with her outfit and never left the house without makeup on. “When I was 15, I owned my first set of heels which were 3.5 inches. It was a huge accessory back then,” she recalls fondly.

Her extravagant style is often well documented on her Instagram profile, the perfect fodder for loyal followers to lap up the designer ensembles she carries so effortlessly. But how much of it is real? “I don’t think of myself as being relevant but I just love fashion. Some people have a stylist but when I leave my home this is what I wear. To me, it’s either you have it or you don’t. The outfit of the day is already passé. People want to know the real you, how do you live your life. Is this what you really wear for dinner or is it just to feed your gram?” Ezurin answers without missing a beat.

“You know, I’ve been observing what everyone is wearing in the room today,” she announces while gesturing to the hair and makeup crew in the room. I suddenly feel conscious about my entire outfit. Though she’s often labeled as a risk-taker in fashion, I ask the fashion enthusiast if she has taken risks when it comes to approaching life. “I’m more of a believer than a follower. If I believe this is what I want to do and this is what I like, I’ll do it not just because everyone likes it. When it comes to life, me as a risk-taker? That’s quite serious. When you have five children, you can’t be a risk-taker. Life and fashion are two totally separate things. You can change your clothes but you can’t change your life,” she points out.

Hitting up A-list parties and being photographed alongside her equally-clad coterie may be the norm for Ezurin but she confesses, “I like people to dress up, I think it’s important as it is part of self-love. I just want everyone to look beautiful all the time. My friends tell me whenever I come, they have to dress up or they will look like the help next to me,” she chuckles. Will she ever consider a future career in fashion? “I’m not a designer, maybe I will do something in lifestyle instead,” she answers.

What’s next for Princess E then? “The first thing I’m looking forward to is to move into a new home and hopefully be able to go back to the UK to be with my children. The pandemic has made me realise my own country is better than anywhere else right now. My children were back here for seven months and they love Malaysia more now, it’s the longest period they’ve been back.”

After fashion and food, reality TV comes to the art world